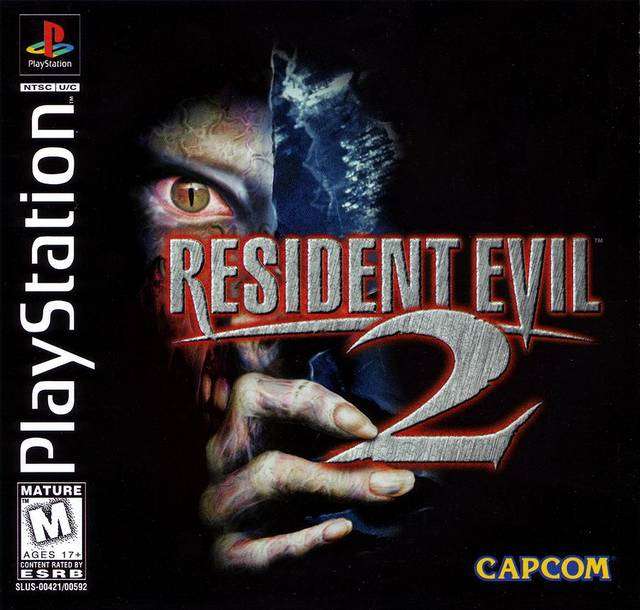 Back in November I reviewed the original Resident Evil game. Today, I’m going to take a look at the sequel. As most gamers are aware, the first Resident Evil proved to be an extremely successful game.  It spawned a slew of sequels, remakes, and even films. The original game has gone down in history as a classic. So, you might wonder how the successor of such an iconic game might stand up…  let’s find out.

First, let’s discuss the version of the game I played for this review. For this playthrough, I used Resident Evil 2 (Dualshock Version). This is the only edition of the game available on the US Playstation Store. It features the original release with added rumble controller support.  This version also includes two additional unlockable modes of play. The Dualshock Version is widely considered to be the definitive version of the game.  Is important to note that there was a Nintendo 64 port of the game. The N64 version did include some interesting additions such as alternate costumes, etc. But excludes some of the features from the Dualshock Version.  Finally, there was a release for the GameCube as well. However, this version is nothing more than a direct port of Dualshock edition on a GameCube disc.

This game takes place about two months after the end of the first title. (If you’ve not played the first game, it’s highly recommend that you do before jumping into Resident Evil 2 – the game will make little sense if you don’t.) By this time, the T-Virus has spread like wildfire and Raccoon City is teeming with zombies.  The game follows the stories of two individuals; Claire Redfield  (sister of Chris Redfield from the original game) and a Raccoon City police officer – Leon Kennedy.  Claire has come to Raccoon City in hopes of finding her brother, unaware of the virus and the current state of affairs. It doesn’t take her long to realize that something is terribly wrong. After a nearly fatal encounter with a zombie, she is rescued by Leon. Together the two of them head towards the police station hoping to find both shelter and answers. However, a tragic accident causes the two to become separated.  Split up and alone, Claire and Leon must explore the seemingly abandoned police station in search of answers. Assuming of course, they can manage to survive… 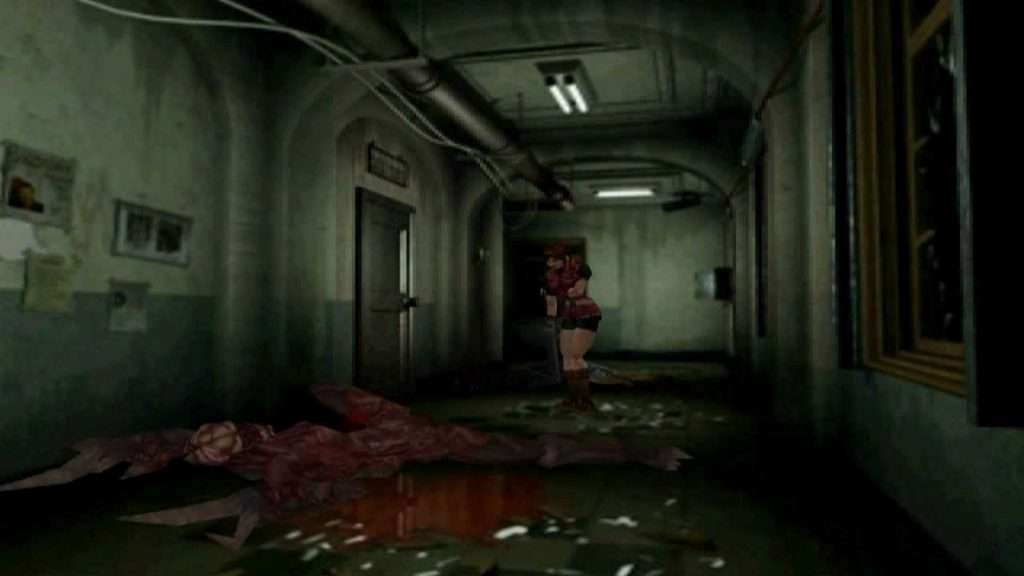 In many ways, Resident Evil 2 is very similar to the original game. The controls, the graphics, and the overall presentation are nearly identical. Like the first game, players can choose between three difficulty levels. There’s also an arranged (Rookie) version of the game as well.  Also, like the first game, players can choose which character to play (Leon or Claire). The main difference here is that the experience for one character can change slightly depending on choices made when playing the other character. For example, if you choose to play as Leon, you can either take of leave some items that you come across during your playthrough. If you decide to leave them, then once you complete the game – you can play again from Claire’s perspective. During this second playthrough, the item that Leon left behind will be available for Claire to find and use.  To get the full experience of Resident Evil 2, you will want to play through the game with each character.

The game originally came on two different discs. A Leon disc and a Claire disc. When starting the game for the first time, you can choose to start with either character. So, this really gives you a total of four different scenarios in which to enjoy the game;  Leon’s story followed by Claire’s, or Claire’s Story followed by Leon’s.  The gameplay does changes slightly depending on which order you decide to go with. – Completing all four will unlock a little mini game-mode called “Extreme Battle”. There’s also a special unlockable chapter called “The 4th Survivor” – This mini-game is available if you manage to score a certain number of hidden “points” while playing through the game itself.

From a lore perspective, Resident Evil 2 does a fantastic job of taking the storyline from the original game and expanding on it. In the first game, the backstory was interesting, but seemed a bit shallow at times.  In Resident Evil 2, more behind the scenes info is revealed. Suddenly, I found myself hooked on the lore behind the game.  The storytelling is told through a combination of exposition, cutscenes, and in-game breadcrumbs. So, the more you explore, the more easter eggs and details you can manage to discover. It’s all masterfully done. 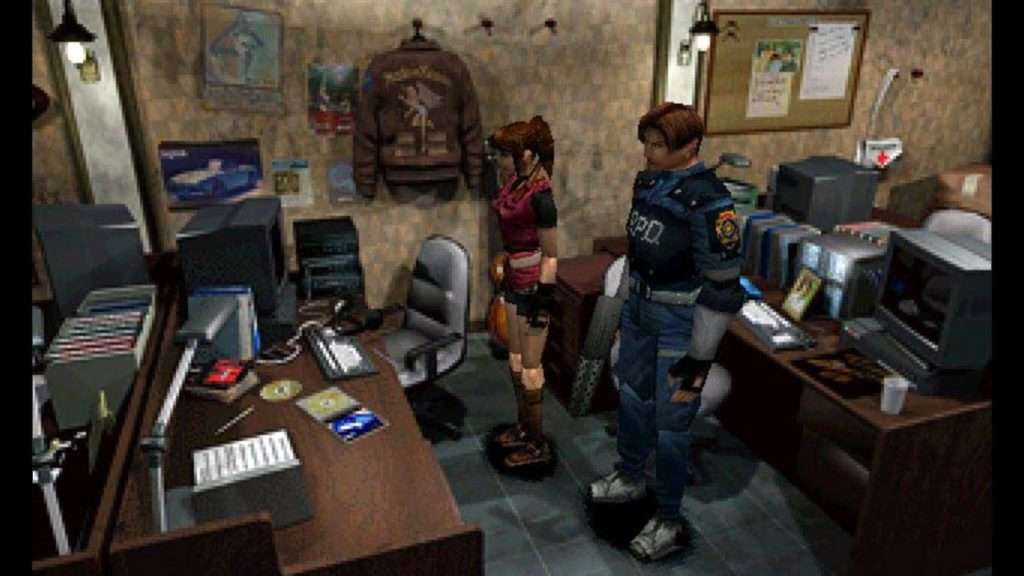 Just like the original, Resident Evil 2 does a good job of building tension in attempts to scare the crap out of players. The spooky environments, ambient noises and jump scares are all very well done. In some ways, even more so than in the original. The voice acting in this title also seems to be a tad better than that of the original game, but… not by much.

My biggest fault with the title is again, the clumsy controls. This game works just like it’s predecessor. Again, are stuck with a stiff, tank-style movement scheme. Which, at the time, was pretty standard. But these days, the playcontrol is cumbersome and archaic. Despite this issue, I found the game to very enjoyable. The good certainly outweighs the bad. 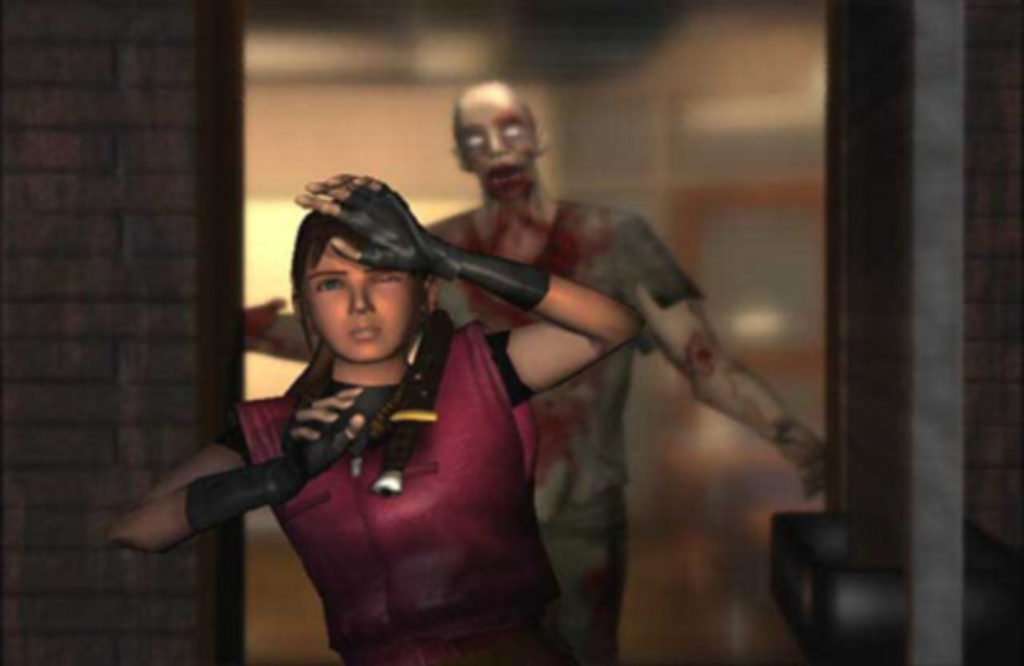 Difficulty: Variable –  The Dualshock version features three levels of difficulty: Easy, Normal and Arranged. Just like with the original game, the easy option reduces the difficulty of the game considerably. Monsters are weaker, and ammunition is more plentiful than in Normal mode. The Arranged version here is different than “the arranged version” found in the first game. Here, “Arranged” (AKA: Rookie Mode) starts you off with access to some very powerful weapons and infinite ammo.  – Regardless of which version you play, I found the game only gets easier as it goes along. The first few moments of the game can be very intense and you’re often being swarmed. But as you play and manage to secure areas and increase your arsenal – things get a lot easier.

Story: This game continues the story laid out in the first Resident Evil. More details are provided this time around that help to clarify some of the more mundane aspects and to really flesh things out. Despite introducing us to some new characters, the connections to the first game are clear and very well done.

Originality: In many ways, there’s a lot about this game is very familiar to the first title. But, Capcom managed to keep things feeling fresh with a change of scenery and a few new enhancements. Having multiple/concurrent character scenarios is quite an original idea that really sets this game apart as well. While Resident Evil 2 is very much a sequel to the original, it manages to stand on it’s own.

Soundtrack: Just like with the first game, the soundtrack is very minimal. The music is sparse and often used as a tool to build tension. But, when there is music to hear, I found it to be an improvement over that found in the original game. RE2 also uses ambient sounds to help set a spooky tone. All of it is very well done. The only complaint I have here are some minor gripes with the voice acting. But to be honest, I’ve heard worse.

Fun: Resident Evil 2 is a fun, entertaining successor to the first title. Again, it would be the perfect game to play on a dreary stormy afternoon or late in the evening with all the lights off.

Graphics: The pixelated graphics and the low resolution FMV movies are very dated by today’s standards. But at the time of the release, they were considered very well done. Just like with Resident Evil, RE2 still manages to capture the spooky atmosphere it needs to unnerve it’s fans.


Playcontrol:  Again, this is one the weakest point of the game for me. The characters in the game is controlled using the old, clunky “compass rose tank” style of movement. Players used to modern 360 degree movement will need some time to get adjusted. Overall the controls feel stiff and antiquated. But in the long run, they are manageable with a little practice.


Value:  This game is available as a PS One Classic on the Playstation Network for $9.99. Even today, this price is well worth it.

Overall score (1-100): 90 – I have to give this game a very high score, but for slightly different reasons than the original. Whereas the first game scored some major points with atmosphere, this game beats it on storyline. Plus, being able to experience it from multiple scenarios and actually have them interlap to some extend is brilliant. At the time, it was a brand new experience.

Available today on:  Currently Unavailable   – (Updated as of Spring 2022)