I don’t get many reader emails,  maybe 3-4 a month. But when I do they are usually requests for me to review a particular title. Of all the review-requests I receive, Ocarina of Time is by far the most requested title. So, for many, (myself included), this review has been a long time coming. Finally, I’m going to share my thoughts on this legendary title.

I’m sure that nearly every person reading this review, or even this site in general is familiar with this game. But just in case you’ve been living under a rock for the last twenty years, let me bring you up to speed. Ocarina of Time is the fifth entry in Nintendo’s famous “Legend of Zelda” series. It was originally released in 1998 on the Nintendo 64. It is nearly universally-heralded as the best “Zelda” game in the series, and almost equally lauded as one of, if not THE, greatest video game of all time.

I was fortunate enough to play this game a few years after it was originally released. So, even though I missed out on the initial craze, the game holds a deep nostalgia for me – as it does for many gamers.  My first experience with the title was in 2003, when it was re-released as part of The Legend of Zelda: Collector’s Edition compilation for the GameCube. This version of the game is a nearly perfect port of the N64 title. The collection contained both the original version of the game as well as a remixed version dubbed “Ocarina of the Time: The Master Quest“.  The GameCube version of the game was released just a few months before the birth of my first son. I have many memories of playing this game during late nights with my infant son in a bassinet by my side. This playthrough was my first time re-visiting the game since those days.

For those interested in playing it, the game is available in it’s original version on the Wii U virtual console, or on the Nintendo 3DS as Ocarina of Time 3D. For this playthrough/review, I did in fact play the 3DS version of the game. Either one is well worth your time, but I will state that the 3DS version, in my opinion, is the definitive version of the game. Aside from improved graphics, and some minor button assignments/playcontrol tweaks, the games are virtually identical. Plus, the 3DS version does come with the Master Quest (unlocked after completing the main game).

I will go on record as stating that, to me, the original N64 version had some major playcontrol issues. But, I am one of those rare people that generally disliked the Nintedo 64 controller. Playing the GameCube port of the game was even more awkward. In my opinion, the 3DS version offers the superior playing experience all the way around.

Of all of the games in the series so far, Ocarina offers the most in-depth story in terms of lore. Many of the backstory concepts mentioned in the other games are given an epic, detailed treatment in this title.  The Legend of Zelda timeline is so convoluted and complex, that it’s nearly impossible to summarize in a simple way. So, I won’t get into how this game is related to others in the series. But it is important to understand that many of the games take place centuries and ages apart from each other. The hero “Link” and the princess “Zelda” are not always the same individuals from game to game. At the time of it’s release, Ocarina was the earliest title in the series chronologically.

This game focuses on a young child named Link. Link lives in a small woodland village inhabited by a slyph-like race called the Kokiri. Each Kokiri has a fairy companion, each one except Link. One morning, Link is awoken from by a fairy named Navi, who informs him that she was sent by the great Deku Tree, the guardian of the forest. Link soon learns that the tree has been poisoned by an evil man from a desert far to the west. His goal is rule the entire world. Link is sent on a quest to help stop this nefarious villain. His first stop is Hyrule Castle, where is instructed to meet with Princess Zelda. Link’s quest will take him to various locales all over the land of Hyrule. (Many familiar from other games in the series). During his journey he will even gain the ability to travel back and forth through time. All in effort to thwart the evil Ganondorf!

Ocarina of Time is the first 3D title in series. By this time, Nintendo had learned much since the days of Mario 64. The camera issues found in that game were now largely a thing of the past. For me, Ocarina was one of the first nearly flawless 3D-rendered games released for a console at the time. Let’s not confuse the term “3D” being used here with actual Three-Dimensional Technology. Because the most modern version of the game Ocarina of Time 3D is an ACTUAL 3-D title. Making use of the Nintendo 3DS technology, the handheld version of the game is presented in a real 3-D format. (and very well done!)

Aside from the visual presentation, the game follows a format that fans of the series are familiar with. Scattered across the land are numerous dungeons. Each dungeon is filled with various puzzles that must be solved in order reach the end, where a boss awaits Link. As in other games, each dungeon also contains a special treasure that gives Link new skills or abilities. These skills or items allow Link access to new parts of kingdom, thus progressing the game further.

It certainly possible to speed through the game by simply following the prompts given to you throughout the game story, but just like other Zelda titles, players who take the time to explore the world and uncover all the nooks and crannies will have an easier time. Ocarina has a number of sidequests sprinkled throughout the main game. Each well worth the time of any serious player.

The hype behind Ocarina of Time is strong. As I mentioned earlier, it is considered by many gamers to be one of the greatest games ever made. That’s quite a bold statement. But, it’s also one that I cannot deny. There’s isn’t much about this game that isn’t perfect. Everything from the storyline, to the artwork, to the music – are simply spot-on. The level design is insightful. The puzzles are challenging (but not impossible). The game as a whole is nothing short of breathtaking. I find it difficult to declare that any game is “perfect”. But if any one title is deserving of such a declaration, it is this one. 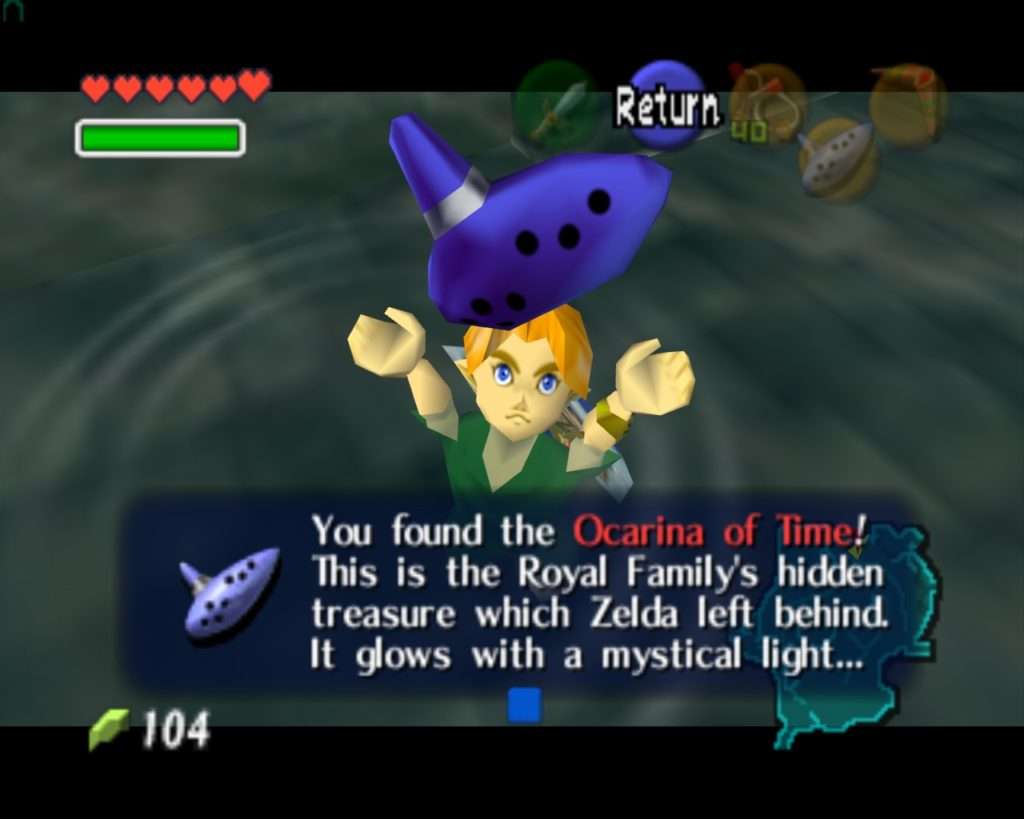 Difficulty: Medium –  Ocarina of Time does not offer multiple levels of difficulty. But as one might would expect, the game starts off relatively easy and progresses in difficulty as it goes. Most of the challenge in the game comes in the form of various boss fights. For a first time player, several of these encounters can be very frustrating at first. But as typical with most games of this type, each battle has certain mechanics. Once learned, these battles become much easier.  Players willing to take the time to explore and complete the optional side quests will also have a much easier time.  For players of the 3DS version, The Master Quest becomes playable upon completion of the main scenario. This version of the game features a higher degree of difficulty and rearranged puzzles and challenges.

Story: The story presented in Ocarina of Time is nothing short of epic. All the lore from the previous Zelda titles can be found here, and are explained in great detail. The game also serves as the origin story for Ganon, the protagonist for most of the series.

Originality: This title features the gated/progression style that players familiar with the series are already accustomed to. However, when combined with a new 3D presentation, Nintendo manages to breathe new life into this time-tested formula. One new stand-out feature in this game is the actual “Ocarina”. Throughout the game, Link is able to learn new songs that can then be played on a virtual ocarina. Playing these songs can have various effects depending on when and where they are used. This concept is executed by turning the buttons on the controller into actual notes on ocarina itself. This makes for a unique and memorable experience.

Soundtrack: The music in Ocarina of Time is nothing short of fantastic. The soundtrack for the game ranges from emotional to infectious. I personally found myself whistling the ocarina tunes when not playing the game. In fact, the “Song of Storms” has been stuck in my head for nearly thirteen years. It’s no wonder that the score from this game is a frequent attraction at symphony halls worldwide.

Fun: Ocarina of Time is a blast. It’s addictive. Playing this game resulted in many late night sessions over the last two weeks. I’d often find myself saying, “That’s it. Once I’m finished with this dungeon, I’m turning it off for the night.” Only to find myself pick it right back up fifteen minutes later.  The game can be frustrating at times, but as a result it also ends up being even more rewarding.

Graphics: At the time of its original release, the 3D graphics were state of the art. However, like many games from that era, it has not aged well. Playing the original game on the Wii or Wii U virtual console does give it a bit of a visual boost over playing it on the original hardware. For most players, I do recommend the 3Ds version. The graphics on this new version are not only sharper and less jaggy, but many of the textures have also been improved.  – I should also note that when playing 3DS games, I typically don’t play with the 3-D turned on. But the 3-D effects in this game were so stunning that I actually spent the majority of my time playing in full 3-D mode. (I played this on the New 3DS which features improved 3-D effects, so your mileage may vary)


Playcontrol: The original N64 version seems to have some annoying playcontrol issues for me. But as mentioned earlier, I’m personally not a fan of the N64 controller as a whole. Playing the original game on the Wii or Wii U Virtual Console nearly requires a Classic Controller, in my opinion. But even then, the game feels very “off”. The controls for the 3DS version are overall well thought-out and intuitive.  Having played this title on every available system, I have to declare that the 3DS offers the best playcontrol of the lot.


Value:  This title is available on the Wii U virtual console for $10. The 3DS version is usually found for a mere $20. Either of these prices are a steal for what you can get out of this game. It’s important to note that the 3DS version does come with both the original game and the Master Quest. So, it’s really two games in one.

Overall score (1-100): 100 – Giving this title anything less than a perfect score is unthinkable. It is a stellar game that provides hours of entertainment. As mentioned numerous times above, you’ll often find this game on the list of all-time greatest games. It is certainly worthy of that honor.