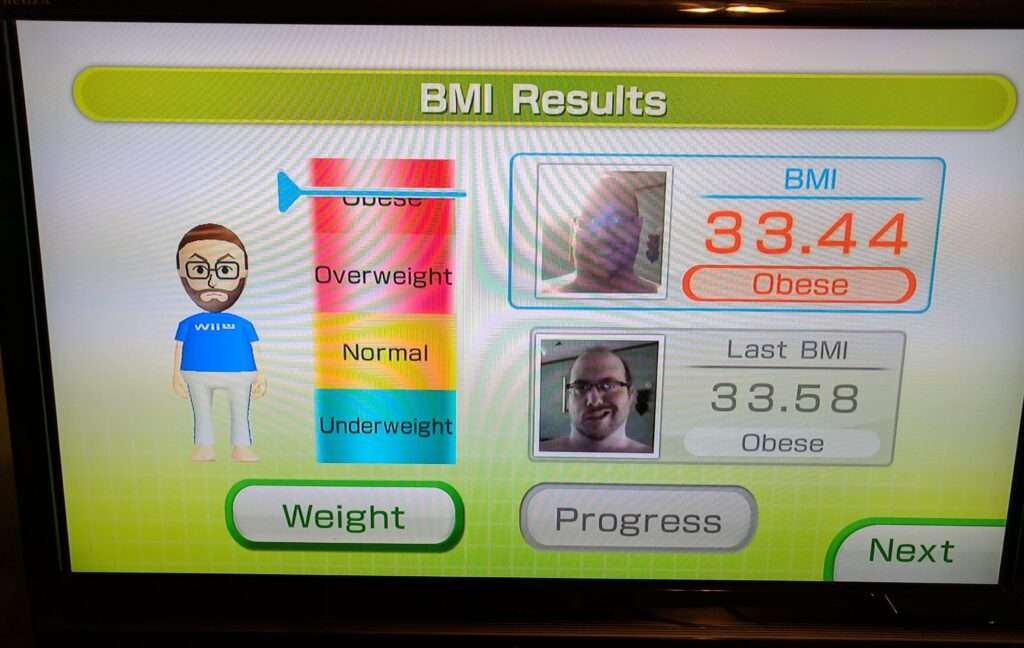 I’m now two weeks in to my Wii Fit U experiment and I have had time to develop some thoughts on the game/program.

First off, I want to say that I am making progress with the software, albeit very slowly. But, at least the numbers are not going up. My routine with Wii Fit U is as follows:

I am trying to eat a little more sensibly. But, to be honest, I’m used to pretty much gorging on whatever I want. Trying to diet cold-turkey would be an absolute disaster for me. So what I’m doing instead is focusing on managing my breakfasts. Instead of grabbing a McMuffin in the morning, I’m trying to replace the junk food with something semi-healthy instead. For example, I’ve been drinking a Bolthouse Farms breakfast smootie, or eating a Cliff Bar several days a week.  I still allow myself one no-so-healthy breakfast during the work-week. Other meals and weekends are free-reign.  As I continue to progress, I’ll tighten the restrictions on myself.

I also try my best to play Wii Fit U every morning, Monday-Friday. Just when I think I’ve seen everything the game has to offer, it prompts me with some new statistic or it unlocks some new feature. For example, the other day it announced it was now setting a daily “calorie burn goal” for me, and it uploaded this data to the Wii Fit Meter. This interactivity continues to impress me.

That being said, I’ve had enough time with the game to make some judgments. When I first started Wii Fit U, I was expecting a very guided experience. But the game is not really that at all. Instead of holding your hand, the game pretty much just gives you the keys and lets you run wild. Eventually, it will allow you to participate in more activities, but for the most part you’re on your own. With this in mind, I’ve decided that Wii Fit U should be looked at as more of an activity center than as a regimented weight-loss program. Yes, there are tools in place to help you monitor your weight, but the game offers little in the way of guidance. I am now to the point where the game is telling me how many calories I need to burn in order to maintain my current weight loss, but that’s largely the only feedback I’m receiving.

Now, that’s not necessarily a bad thing. People who want to start exercising but who might be too embarrassed to go to the gym or to step outside, may find exactly what they want with Wii Fit. It offers a number of useful activities from the privacy of your own home. But I feel like the game alone is simply not enough for someone who is wants to go from “couch to 4k”, as they say.