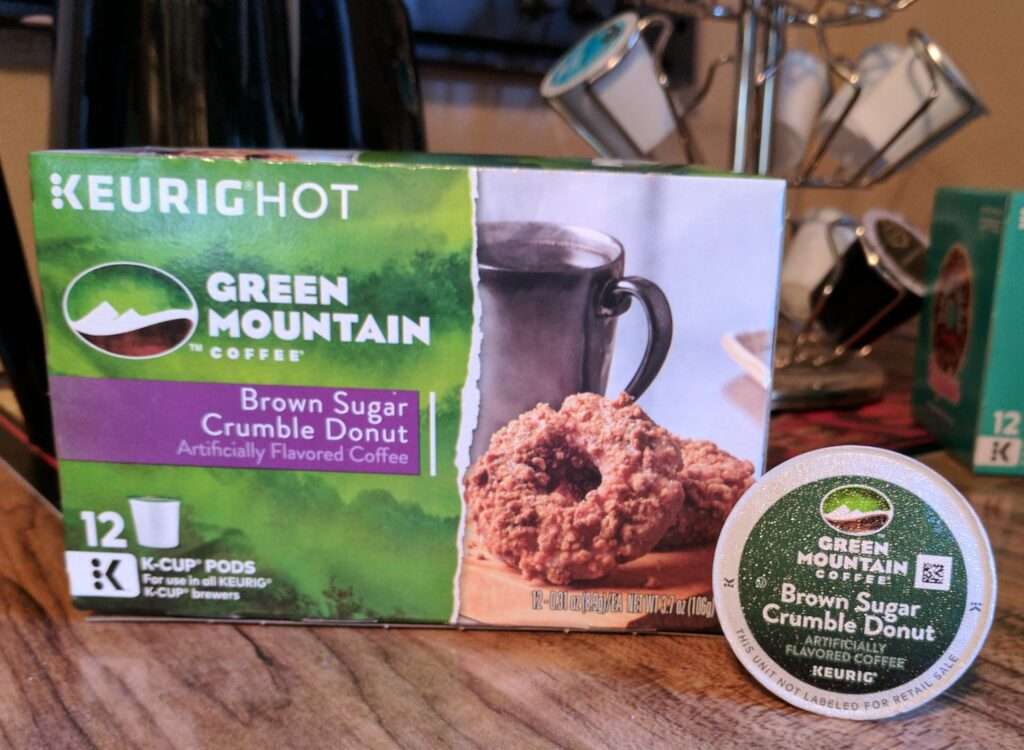 As I burn my way through the content of the new Final Fantasy XIV expansion, I find myself turning to my good friend caffeine to help fuel the late nights and early morning play sessions.  This week, I decided to take a trip to the grocery store and pick up a couple of new varieties. The first one that landed in my shopping cart was the “Brown Sugar Crumble Donut” by Green Mountain.

As I’ve mentioned before, I tread a fine line between both shying away from, and being a sucker for flavored coffees. They always look so good sitting there on a shelf. But generally speaking, they usually tend to taste artificial and just… not very good. Of course, there are a few notable exceptions to this. So with that in mind, I decided to bite the bullet and give the Brown Sugar Crumble Donut a shot… and I was pleasantly surprised!

According to the label, this is a medium roast coffee. But, to me it tastes a little on the light side. There’s very little bitterness in this cup. The brown sugar is the prominent taste here. But there’s also a slight artificial cinnamon/cake donut flavor as well. But, it’s really not that bad. I found this to be a pleasant and drinkable coffee. It would go great on a sunny Sunday morning with a nice hearty breakfast.

Despite being a decent coffee, it just doesn’t seem unique enough to stand out against many of the other similar offerings out there. Yes, the main flavor here is brown sugar, but as a whole this coffee is too much like the superior Cinnabon coffee to shine by itself. Perhaps if it was a bit cheaper I’d be more inclined to recommend it over some of the others. Regardless, it’s a solid offering.

Would Purchase again?: Maybe. It’s tasty and certainly has it’s place. But, I feel it too much like many other similar, and superior coffees to really recommend over others. That being said, if if you like brown sugar and cinnamon, and this is the only option at your local store, don’t hesitate.