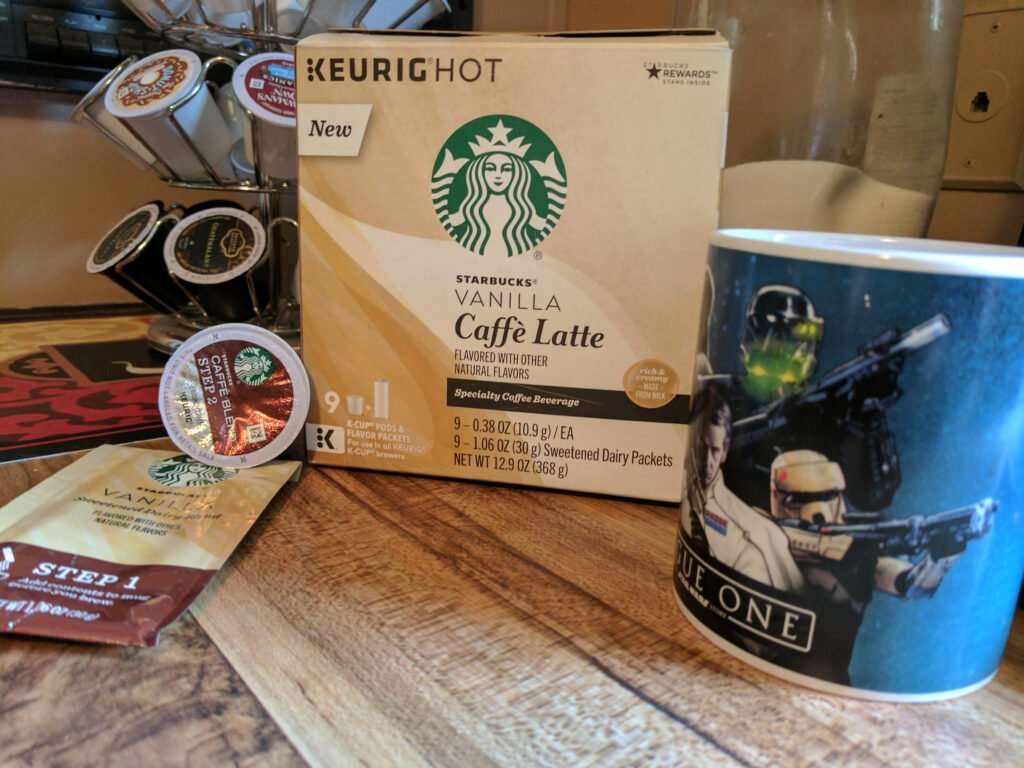 It’s been over a month since I’ve had a coffee review. But, this time I’m back with something a little different.  One of the big features of the Keurig 2.0 machines was the official support of different “artisan” pods. Technically speaking, the machine is supposed to handles brews of various strength and even alternate beverages like hot chocolate and tea. Since the release of K2.0 machines, I’ve noticed an increase in a number of vendors that sell these fancy “cappuccino style” drinks. These usually include, along with the usual K-cup, a flavor/froth packet and sometimes even a drizzle of some sort.  These have always seemed a bit gimmicky to me, but I decided to take the plunge and give one a try.

For my first foray into the world of coffee packets, I picked up a box of Starbuck’s Vanilla Caffe’ Latte. Now, I’ve tried Starbucks coffee in the Keurig machine before and so far the verdict is still out. I really enjoyed their Holiday Blonde Roast, so I decided to give this box a chance and see what the fuss is all about.

The way this works, you open and empty a packet of flavoring/froth powder into your empty mug, then dispense the K-Cup pod normally. Once it’s full, you stir. This is supposed to produce a foam, like one would expect from a desert-type cappuccino. Sadly, there is little to no foam. So, I suspect this packet contains mostly sugar and other flavoring.

The coffee itself is very mild. It has a hint of that classic “gas station grade” cappuccino taste, with a pleasant vanilla underpinning. It’s nothing remarkable, but to be honest, it’s not at all bad. This would make a nice dessert coffee, but it doesn’t really scratch that caffeine itch many drinks will want first thing in the morning.  In my opinion, this seems more like something for the kids than something a really coffee fiend would enjoy.

These specialty drinks tend to be a dollar or more per box than the standard K-cup pods. With that being said, I’m not really sure these are worth it. The gimmick doesn’t pan out.

Would Purchase again?: Doubtful. Not a band drink per se,  but not worth the premium price. You can get the same flavor from a can of instant cappuccino (stir-in) for a fraction of the cost.