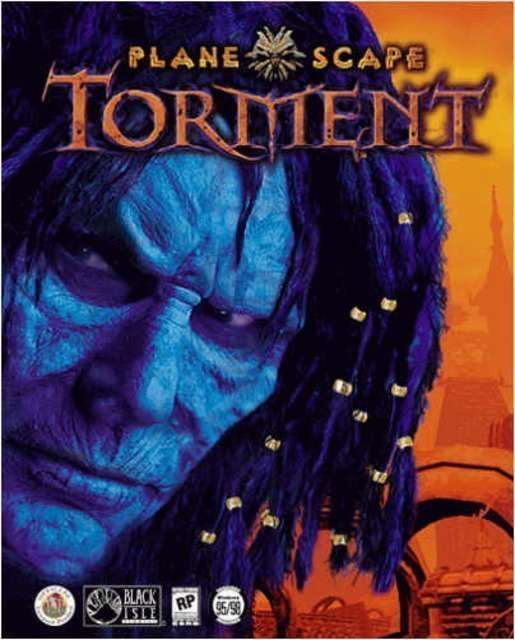 If you’re a frequent reader to this site, you know I’m a Dungeons & Dragons fan. I love the Forgotten Realms, the world of Dragonlance, Greyhawk, Ravenloft, etc. But one campaign setting that has always held a special place in my heart is Planescape. Ever since I first cracked open the original Manual of the Planes all those years ago, the Outer Planes have captivated my imagination. In Dungeons & Dragons, the “Outer Planes” are best described as different dimensions. The Seven Heavens, The Nine Hells, The Abyss, Ysgard, etc – all of these mysterious places, both good and evil, make up what is known as the Outer Planes. While nearly infinite in their own way, they all share an astral connection. And right in the center of it is the wondrous city of Sigil. It is the crossroads of all other dimensions, a place to total neutrality. It is ruled by a mysterious being known as the Lady of Pain. She is a silent enforcer of order. So powerful is The Lady of Pain, that even gods cannot trespass on her territory.  It is here in the city of Sigil, that the classic RPG known as Planescape Torment takes place.

This was a title that I had not originally planned to include in my backlog of playthroughs. But with the surprise release of the Enhanced Edition, I added it my list. Planescape is a game that I enjoyed many years ago during its original release. But it never really caught on in the mainstream. Over the years, the game has built a bit of a cult following. I’m pleased that Beamdog studios has finally decided to give this title the same treatment that they gave Baldur’s Gate and other Infinity Engine games.

If you’ve played any of the other D&D Enhanced Editions, or even if you’ve read my reviews of Baldur’s Gate or Baldur’s Gate II, you already have a pretty good idea what to expect. Planescape Torment (Enhanced Edition) is simply a remaster of the original classic. It’s been updated for modern computers and includes a few quality of life improvements. But unlike Baldur’s Gate EE, there is no additional content or revisions to the game. 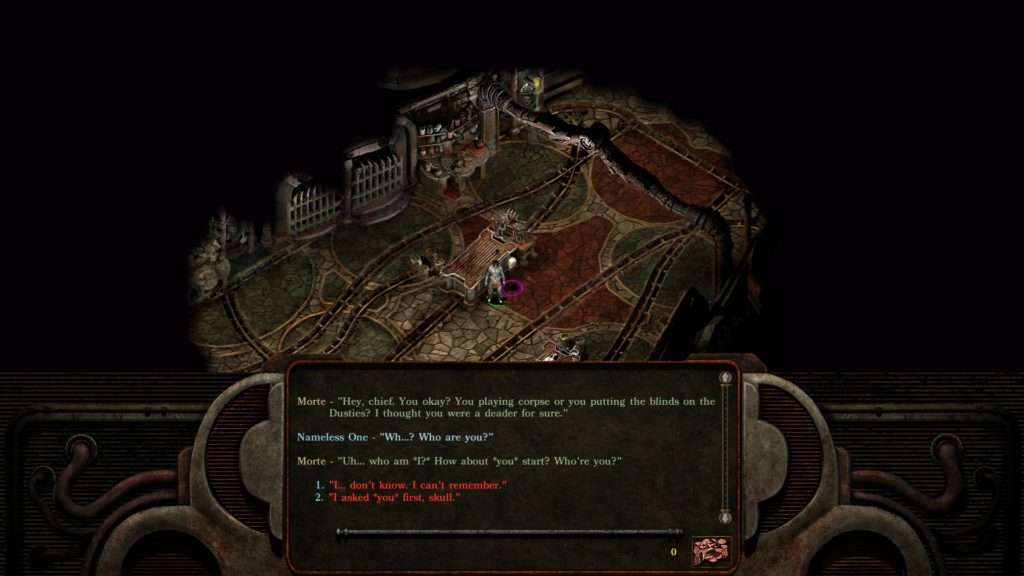 As mentioned above, Planescape Torment takes place in the city of Sigil, in Outlands of the Outer Planes. In this game, you play a strange, immortal character known as The Nameless One. The game begins as The Nameless One wakes up in a mortuary, unable to remember his name or anything about himself. It is there that he meets Morte, a disembodied floating skull. It doesn’t take long for him to figure out that he is immortal. Having recently died, his body was brought to the mortuary. Covered with scars and tattoos, Morte informs The Nameless One that written on his back is a cryptic message that contains clues to his identity. It is here that his quest begins to uncover the details of his past and the reason for his strange immortality. During the game, players will explore the city of Sigil, it’s mythology, and even venture into some of the outer planes in attempt to unravel this mystery.

Like Baldur’s Gate, this game uses the Infinity Engine, so if you’re familiar with other Infinity games, it won’t take you long to get acclimated to this title. It’s largely a point and click title. Also, like BG and BG2, this game is based off of AD&D 2nd edition rules. What makes this game different, aside from the planar setting, is that is it very much focused on the events surrounding the lead character. Yes, Planescape Torment uses D&D rules at it’s core, but it doesn’t really give you that full and open Dungeons & Dragons experience like Baldur’s Gate. Also, at least from my experience, I found Baldur’s Gate to be a little more heavy on combat, whereas the adventure in Planescape tends to revolve a bit on puzzle solving and diplomacy. 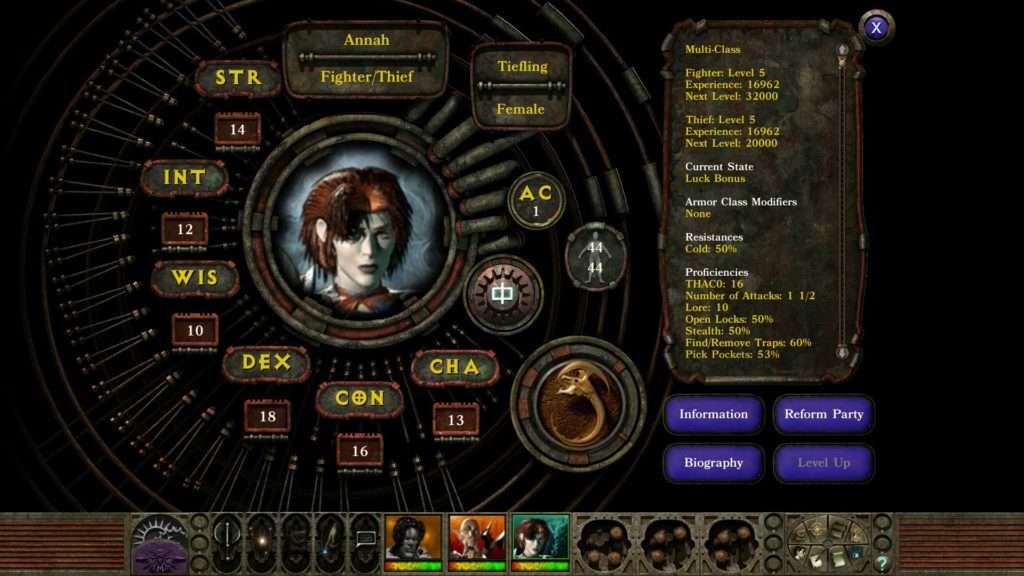 Throughout the game, you will team up with other characters. The relationship you decide to forge with your party members is a very important part of the story. Each character has their own strengths, weaknesses, and skills. As you progress through the story, The Nameless One will have multiple opportunities to change his character class. So it’s easy to adapt yourself to help compliment those in your party.

As you may have guessed, the storyline is a main focus in Planescape Torment. You will be able to explore the city of Sigil freely and interact with it’s residents. There’s quests and tasks around every corner. Engaging the NPCS and listening to their stories is crucial to your success.

Like many RPG games of it’s time, Planescape Torment is a mixture of both open world and “on rails”. Players are locked into certain areas in the beginning, but as you progress through the game you are able to revisit nearly every location. However, the choices you make on your adventure do have consequences. If you’re rude to the wrong person, or worse yet, if you kill an important NPC, it can severely impede your progress.

All in all, Planescape Torment is a classic title. I highly recommend it to nearly any RPG fan. As dated as it is, it actually manages to hold up very well. The Enhanced Edition has proven to be one of the best selling PC games of 2017, and for good reason. 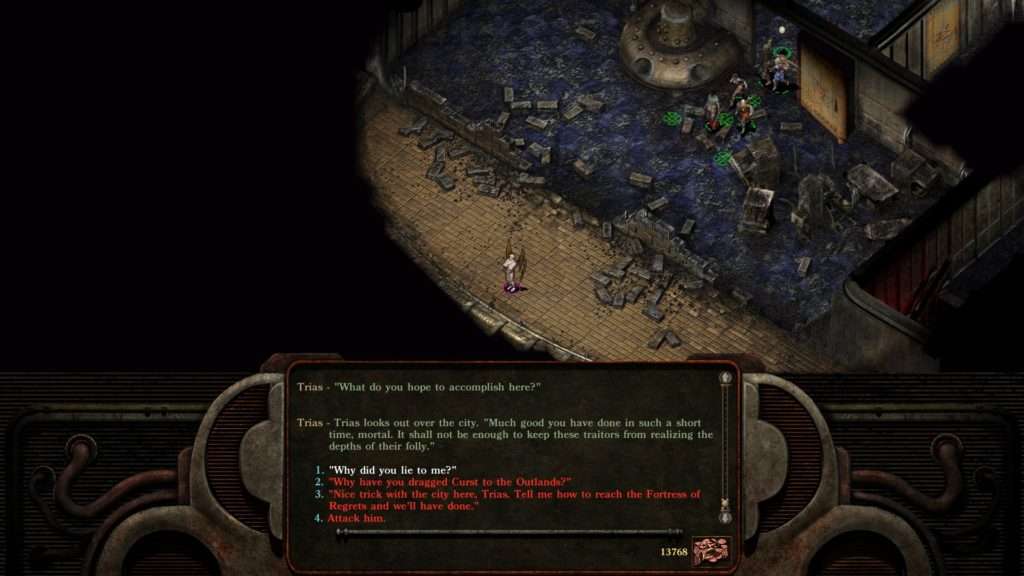 Difficulty: Variable–  Planescape Torment features an Easy, Default and Hard difficultly settings. Having tested all three, I find them to be accurate and appropriate. Planescape, like Baldur’s Gate is an older game. Younger players may have a hard time understanding the pause/start combat strategy that is really required to master the game. But once you figure out the ins and outs, this title starts to click.

Story: Lore and storyline are everything here. If you’re big on story, this is the game for you. Nearly every character you encounter will have a tale to tell. The same is true for almost every location in the game as well. Of all the old D&D CRPGs, Planescape Torment delivers what is arguably the most compelling storyline of them all.

Originality: At the time of it’s original release in 1999, the Planescape setting was a well established brand, but still somewhat of an oddity in D&D. But in my opinion, it is the key to the game’s success. While many players had seen and experienced fantasy RPGS, and by this time, even post-apocalyptic RPGS, there had never been one that explored the multiverse. Having the Enhanced Edition available to allow new players to experience this intricate world, is certainly a good thing. Despite it age, Planescape is still a breath of fresh air.

Soundtrack: Most of the music found in Planescape is ambient and mood setting. There are a few occasions where players are treated to actual tunes, and these are all very well done. As is the majority of the voice acting. For the most part, the story of the game is delivered via text. But there are a few scant portions that are voiced and all of them are well done.

Fun: If you’re a fan of CRPGS and/or Dungeons & Dragons, you’re going to have a blast with this game. However, many players many simply not have the patience for the old-school style found here. The Enhanced Edition does make this title a bit more approachable.

Graphics: At the time this game was released, the Infinity Engine was starting to get a bit long in the tooth. Today, even though a lot of work was put into modernizing the Enhanced Edition, it still looks quite dated. But most of the re-rendered textures are a considerable improvement over the original. The in-game cutscenes and character art remain unchanged from their original versions.


Playcontrol:  I’m not sure why, but Planescape Torment controls way better than other “enhanced” Infinity Engine games. The AI is responsive and accurate, unlike BG and BG2, the controls in this title just work. I did not experience any of the strange and weird issues that I encountered with Beamdog’s other D&D games.

Downloadable Content:  No – At the time of this writing, no DLC has been announced for Planescape Torment. Aside from potentially supporting the fan-favorite “Unfinished Business” mod, it’s unlikely we will see any.


Value:  This game currently sells for $20. Considering the amount of content packed and the overall quality of the game, it is well worth this.

Overall score (1-100): 90 – Planescape Torment is a forgotten classic that, like it’s main character has been resurrected thanks to Beamdog Studios. It’s a must-have for any serious CRPG fan. It’s everything that great about D&D, in a setting that even more fantastic.