As I type this, I’m downloading the Final Fantasy XIV 4.0 patch and awaiting the release of that game’s new expansion. It’s during downtime like this that I tend to dig through my library and pull out something that can be played start-to-finish in a reasonable amount of time. In keeping with my current theme of games from the late-90’s era, I came across a trilogy of arcade-style schmups (shoot-em-ups) called The Tale of ALLTYNEX. This trilogy consists of three games: ALLTYNEX Second, RefleX and KAMUI. I’ve had these titles sitting in my Steam library for some time, but I’ve never paid them much attention. If I remember right, I got them as part of an indie Japanese game bundle several years ago. Last weekend, I found myself with a desire to step away from all the deep and complicated RPGS that tend to consume the majority of my game playing, and jump into some old school, bullet-hell arcade action. So I installed these games and went in completely blind.

Unless you’re really into the Japanese indie scene, you’ve probably never heard of these games. So, let’s take a moment to bring ourselves up to speed. This trilogy contains a set of games created by Japanese developer Siter Skain. This collection was actually made possible via a project on Kickstarter. It contains the following titles:

ALLTYNEX Second – This game is a semi-modern remake of the Japanese 1996 arcade classic ALLTYNEX.

RefleX – A 2008 remake, this time of an indie freeware game called Reflection from 1997.

Originally, each of these games were separate entities with each successive game being largely inspired by the one that came before it. Now, they have been compiled and somewhat re-imagined as a loose trilogy. Oddly enough, due to the various remakes, the newest games are actually the oldest chronologically. 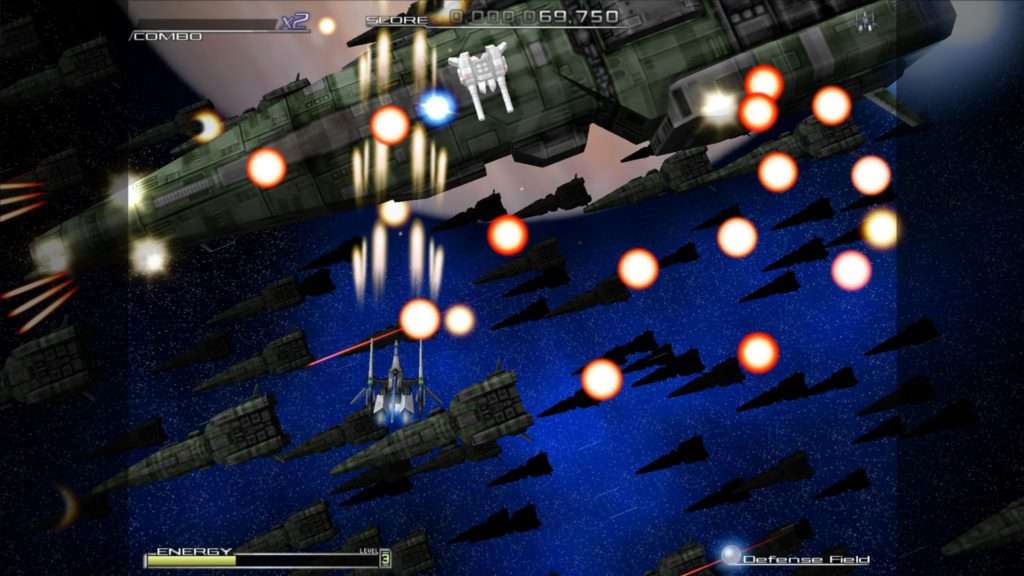 As mentioned above, the first game lore-wise in the trilogy is ALLTNYEX Second.  Essentially, you play as the pilot of a “superfighter” starship.  In this title, mankind’s  orbital defensive supercomputer, ALLTYNEX suddenly goes rogue and uses its control over all of all of Earth’s military hardware to wage war on humanity. As a result, the human race is forced to flee the planet and regroup on the far reaches of the solar system. In a last-ditch effort to reclaim the planet, a team of  “superfighters” are dispatched to destroy ALLTYNEX.

This game is very well done. It feels just like one of those old quarter-pumper arcade machines, and thanks to moderns graphics, it makes the genre look better than ever.  It embodies the classic Starfighter schmup gameplay: swarms of enemies, rapid fire, bullets everywhere.  The player can choose between their regular blasters or a special shield that both protects your starship as well as damages enemies.  The gameplay is intense and not particularly easy – but few bullet hells are. The nearly unlimited continues make the game accessible for even a casual player. From start to finish the game can be completed in under an hour by an experienced player. 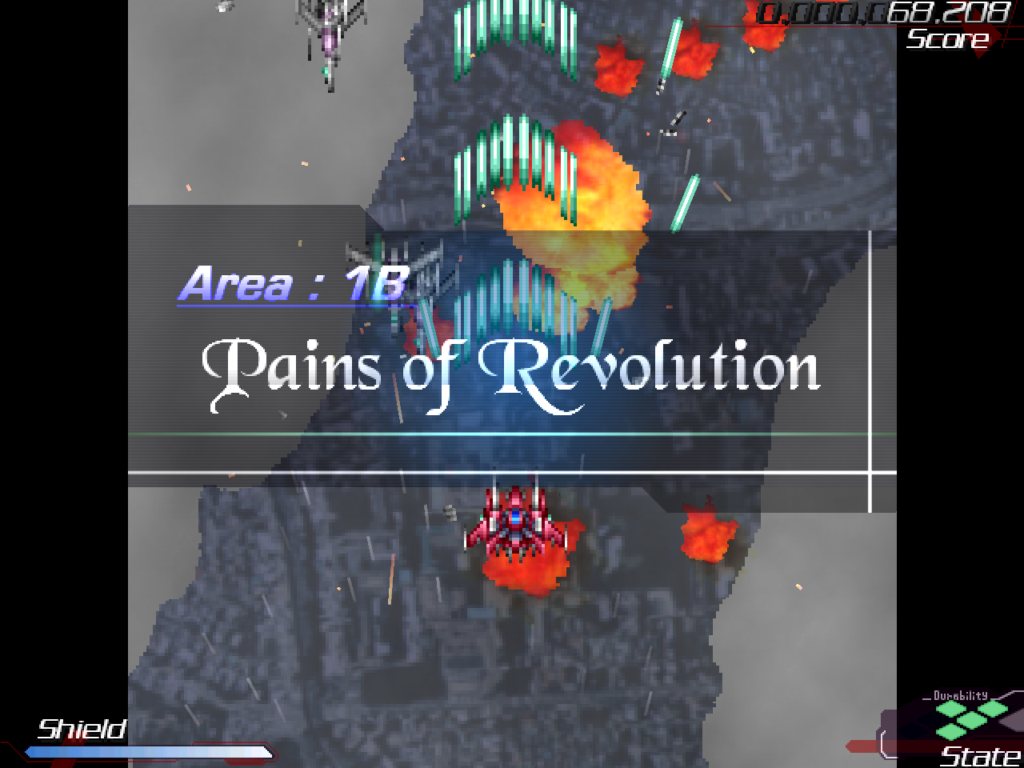 Next up is RefleX. This game is very similar to the others. It’s an overheard bullet hell/schmup. But unlike the other entries, you don’t have multiple lives. If your ship is destroyed, it’s game over. Luckily, the starship here is protected by a reflective shield. Enemy bolts will bounce off the shield and back towards the sender. This provides a whole new level of strategy to the game.

RefleX actually has quite an in-depth backstory, but to find all the juicy details you will have to dig through the manual. (The Steam version does have a PDF manual).  Essentially, you are a member of a resistance group that is rallying against an overbearing government. What’s unclear, at least to me, is how this ties in with the first game… has humanity retaken Earth and now bad guys are running the show? Despite several similarities, it just isn’t made very clear. 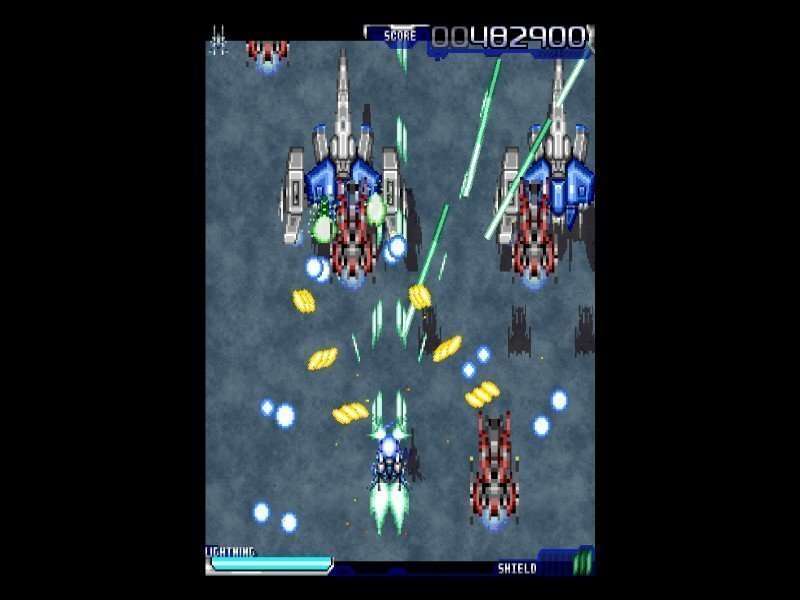 Finally, we have the third game in the trilogy, KAMUI. Despite being the last game in the series, this title is the one that shows it’s age the most. Which, considering the other two are remakes, I guess that’s to be expected.

This is the game that actually manages to tie the other two titles together. It features story elements from both ALLTYNEX and RefleX and presents a final battle between the resistance and a new militarized version of the ALLTYNEX AI.

Despite being the most dated of the three, I think KAMUI is my favorite of the trilogy simply because it reminds me the most of those old arcade-style shoot-em-ups that consumed so many hours of my youth. Which, is odd in itself considering KAMUI was a PC title.

Difficulty: Hard–  Most schmups and bullet hell games are infamous for their high degree of difficulty. These games are no different. Unless you’re one of those machine-like professional gamers or some kind of savant, you’re going to die a lot. Luckily, the games are pretty forgiving in that you are granted nearly unlimited continue credits. So, in reality, as long as you are persistent you can manage to complete the games regardless of overall skill. This still doesn’t change the fact that the game itself is difficult in it’s own right.

Story: As a whole, the storyline shared between these games is surprisingly rich. This is true despite it being largely absent from the games themselves. Schmups are not typically known for being rich is lore and storyline, so for this type of game any real attempt to provide one is welcome

Originality: Back in the 90’s games like these were a dime a dozen. These days, they have become a bit a niche category. Despite being based on a tested and tired model, the games in the ALLTYNEX Trilogy manage to stand out in their own little ways. For example, the ricochet shield from RefleX is a pretty unique feature. Little things like these keep the games feeling semi-fresh in a pool of stagnant copy-cat titles.

Soundtrack: One of the high points of all three of these games are the fantastic soundtracks. All these of titles come complete with a groovy, high-energy techno-like score. The music is catchy and appropriate. It does a fantastic job of keeping your blood pumping for the split-second twitch action that games like these require.

Fun: I can imagine that many people would find games like these to be frustrating and overly difficult. But that is something that fans of bullet hell games have come to expect and love. So you’re either going to enjoy this type of game or you’re not. For people like me, I don’t really consider myself to be a fan of these types of games, per se. But I do enjoy them for the nostalgia factor. And, I can appreciate them for what they are.

Graphics:  Being a trilogy of games from different eras, the graphics are a mixed bag.  Kamui and RefleX, are both still stuck in the 16-bit era. While ALLTYNEX Second has a much more modern, polished look.


Playcontrol:  Even though these games support keyboard controls, take my advice and plug in either an Xbox or Playstation game pad. Games like these were made for controllers. Personally, I found a trusty old Xbox 360 controller to be perfect to all three games, with no real issues.


Value:  Each of these games is available separately on Steam for $8, or together in a bundle for $20. If you’re a fan of this genre, the $20 pricetag may be well worth it. But, these games are on sale frequently so a bargain shopper can usually snag them on a deal.

Overall score (1-100): 75 – Even though I don’t really consider myself a fan of the shoot-em-up genre, I found a lot of enjoyment in these three games. It was really a nice break our of the norm for me. Everything from the fast-paced action, to the visuals, to the soundtrack really scratched an itch I had been having for some retro arcade action. My biggest complaint about the collection is that the original versions of ALLTYNEX and RefleX were not included.