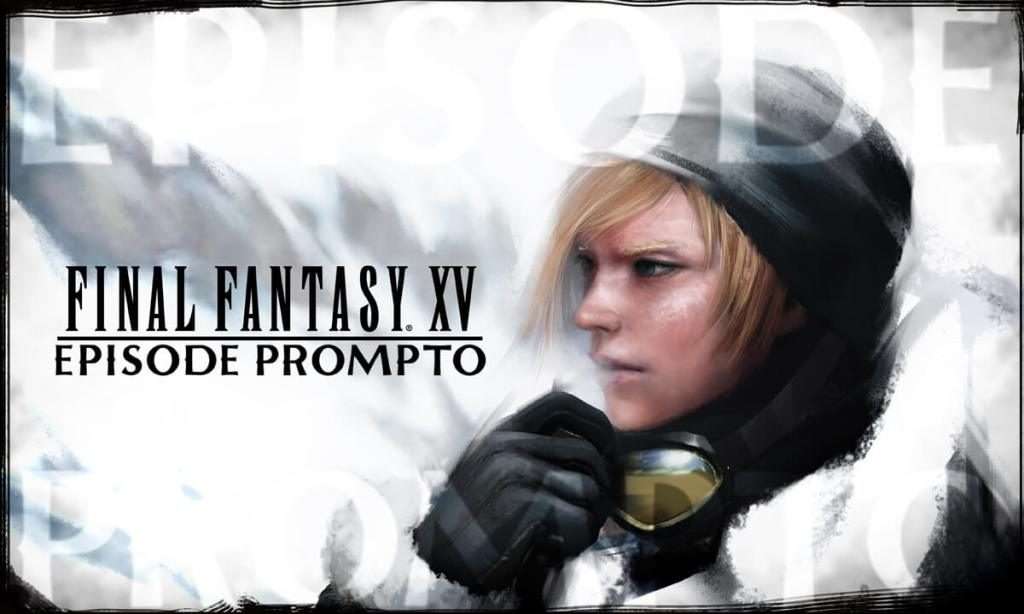 The second batch of DLC goodness for Final Fantasy XV is finally here, Episode Prompto. Much like the previous downloadable chapter that focused on the character of Gladiolus, this entry shows you what happened with the character of Prompto during his hiatus from the main game.  Again, like the previous DLC, this entry is both a mix of familiar as well as new mechanics that help keep things interesting. Whereas Gladio’s DLC had a very melee/brawler feel to it, this chapter is reminiscent of a third-person shooter. In a lot of ways, it actually reminded me of the old FFVII spin-off Dirge of Cerberus.

Those that played through all of Final Fantasy XV may remember the scene in the game where Prompto falls from a moving train and is separated from his friends for a time. This chapter shows you what happened to him during that time away. In a nutshell, Prompto finds himself alone, wandering the frozen wastes. Finally, he collapses and is “rescued” by Imperials. It is during his captivity that the bulk of this DLC takes place. During this chapter, Prompto will learn the truth behind his origins as well as uncover the details behind the Empire’s true motive. 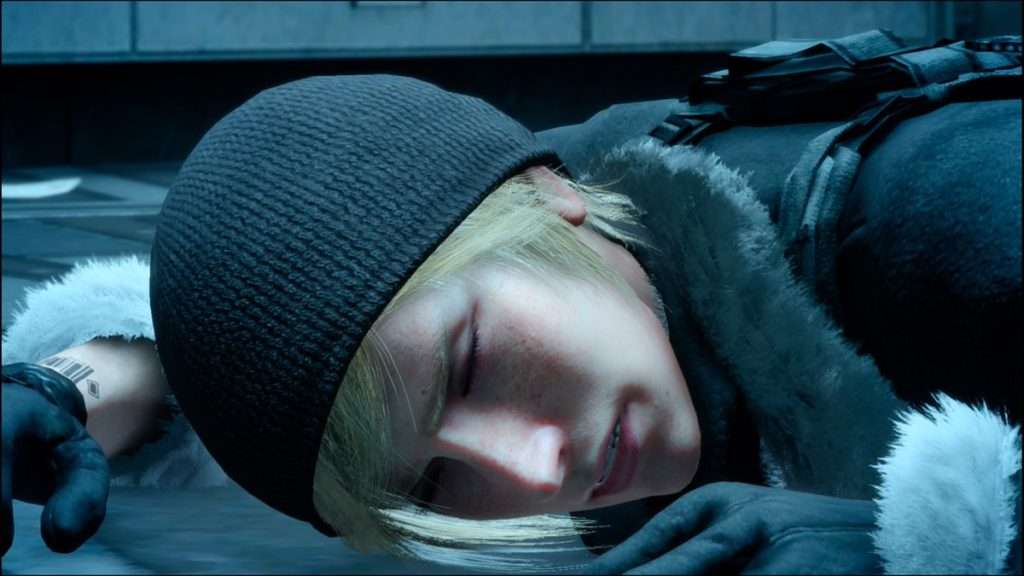 The main scenario of this entry can be cleared in about two hours. However, for players that wish to take their time and explore there’s actually quite a bit to do. This DLC also includes a handful of sidequests. The bulk of these involve scouring for materials that can used to upgrade a snowmobile that Prompto finds and uses to aid in his escape. But a few of them feature optional boss battles. Typically, I always try to complete optional content as a I go. But in the case of this DLC, I actually suggest completing the chapter first. Then, starting it over and exploring all of the nooks and crannies. I make this suggestion due to the large play-style learning curve of this DLC presented when compared to the main game. By the time you’ve actually played through Episode Prompto once, you’ll have your feet wet enough to tackle many of these optional challenges.

When I said that this DLC had a third-person shooter element to it, I meant it. Most of the combat in Episode Prompto is ranged melee. Prompto will rely on various guns as well as duck and cover behind obstacles when engaged in combat. His arsenal ranges from a handgun, to an SMG, Sniper Rifle, Grenades and even a Bazooka. Most of the combat takes place on foot, but some portions of the game even find him shooting from a moving snowmobile or even from the back of a motorcycle. It’s a whole different world when compared to the main Final Fantasy XV game. 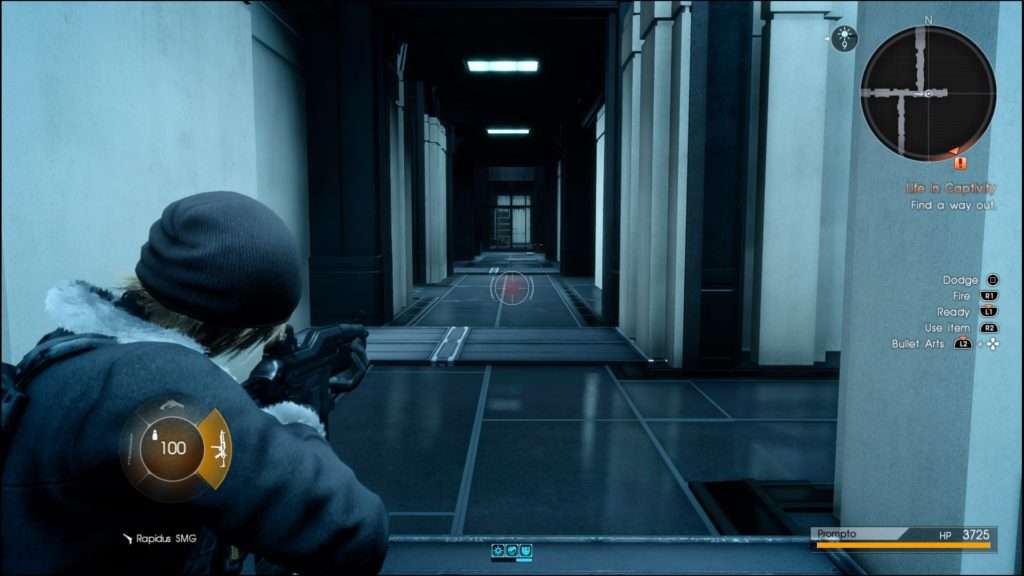 If I’m being honest, I have to admit that a lot of it is really clumsy feeling. The weapons run out of ammo pretty quickly, and when they do you’ll be left scouring your surroundings to find a new gun to grab and use (usually while enemies are firing on you). The targeting is pretty terrible, but after a while you manage to get the hang of it, so it’s ultimately bearable. Despite the iffy playcontrol, the shooter aspect is a nice change of pace when compared to the original game. So in it’s own way, it a bit refreshing.

All in all, the best part about this DLC are the story elements. Even though Prompto’s backstory is covered in both the main Final Fantasy XV game as well as the Brotherhood anime, this DLC scenario sheds even more light on his origins. It also includes several welcome cameos by some fan-favorite characters. Completing the DLC unlocks both a weapon and clothing set for Prompto in the main game. It also unlocks a special timed-trial mode and an “Intensive Training” mode of play. The downloadable chapter is included in the season pass of available for $5.00 on PSN. 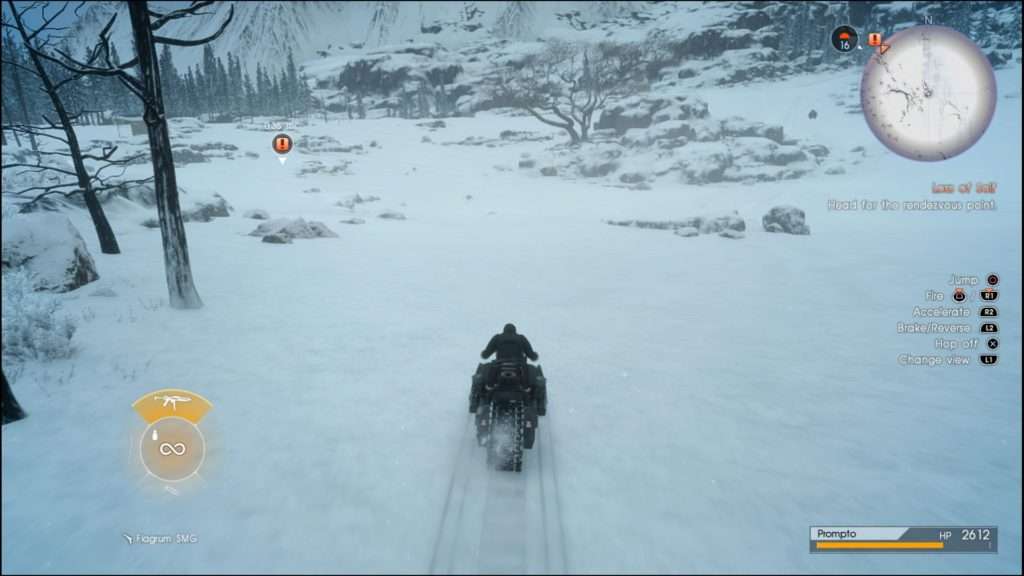 Overall Impression:  Another short but sweet add-on to Final Fantasy XV. Players who enjoyed Episode Gladiolus are also likely to enjoy this one. That being said, players who didn’t enjoy the last DLC release are also likely to enjoy this one due to different pacing and the inclusion of some open-world elements. It seems that SE is listening to their fans and modifying the DLC to meet the expectations of their players. Personally, I’ve enjoyed both.

Value: Again, like the Gladio DLC, this chapter is very short. But for a price of $5.00, I find it hard to complain. The new side-quests and optional challenges also give fans a little more bang for their buck.