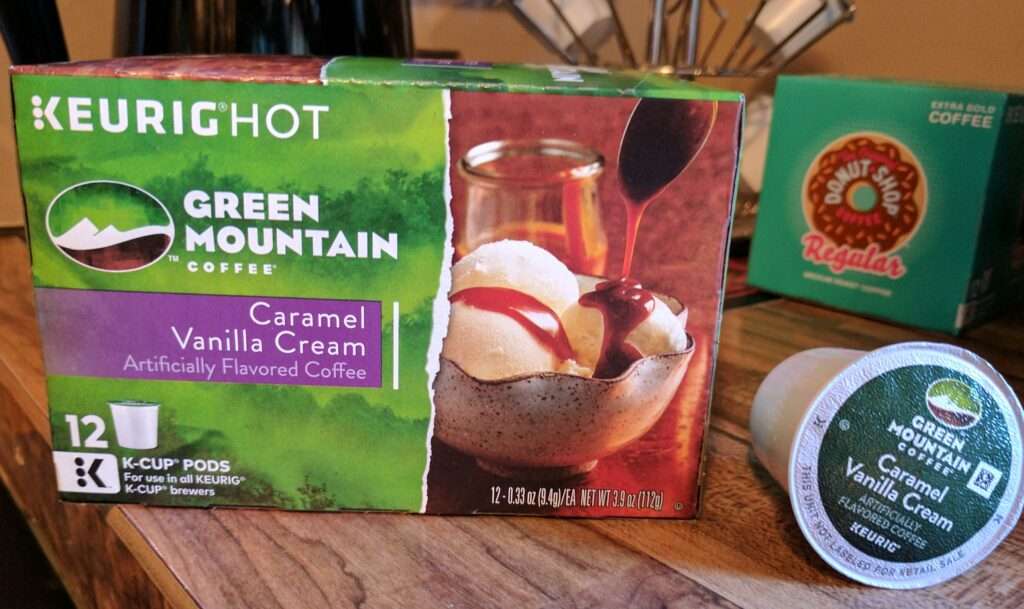 It’s been a crazy few weeks for me. Aside from burning through both Final Fantasy XIV: Stormblood and XV: Episode Prompto, I’ve also been recovering from the Steam summer sale and putting in some extra hours at work. So, thank God for coffee…

This week, I found myself with another Green Mountain flavored selection, the Caramel Vanilla Cream.  As I’ve mentioned before, artificially flavored coffees can be very hit or miss, so picking up a new box is always a gamble. But, I’ve had some luck lately so I figured I’d roll the dice on this one as well.

First thing I noticed was the aroma during the brew cycle was very strong and pleasant! I figured that with such a powerful aroma, this might end up being a rich medium roast coffee, but I was wrong. It’s not specifically stated anywhere on the packaging that I could find, but to me this actually seems to be a light roast – and it really shows. There’s not much here in the way of actual coffee flavor. Instead, the blend is heavily masked by the artificial flavoring. Now, the flavor is not particularly unpleasant… It a rich, creamy, burnt-caramel flavor. But it does taste VERY artificial. There’s obviously nothing natural about this cup. But again, it’s not terrible.  Many of these flavored coffees don’t fare well hot, so this is an example of one of those coffees that is actually better over ice with lots of milk or creamer.

To me, I don’t really understand why this coffee exists. There are other vanilla/french vanilla flavored coffees out there that manage to nail the taste quite well. The same can be said for caramel flavored coffees. Merging the two flavors into one cup sounds like a good idea, I guess. But in practice, it just falls flat.

Would Purchase again?: Doubtful.  Not terrible, but not particularly good either. The rich, fake flavoring might appeal to kids and casual coffee drinkers. But people who really enjoy the complexity of a rich blend or even a quality single-origin coffee are likely to be turned off by this.