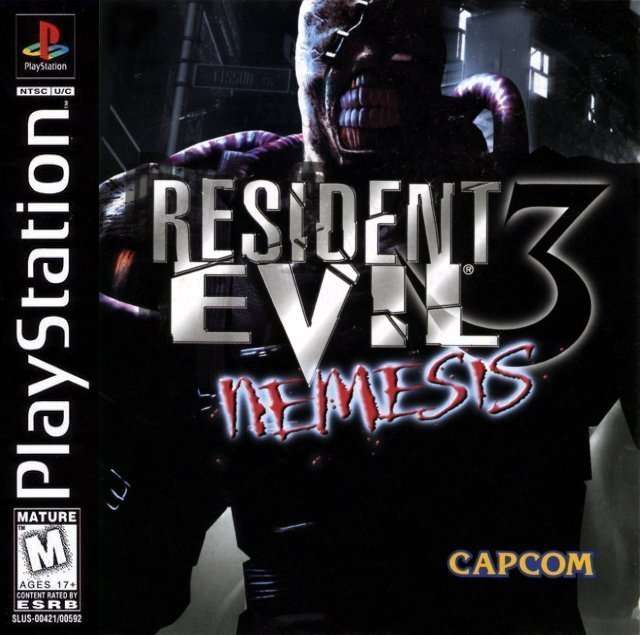 Halloween is tomorrow! And my household has been celebrating the season in full swing. The decorations are up, the jack-o-lanterns are carved and the sweet smell of pumpkin spice flows through the air. I’ve spent several caffeine fueled nights playing through the third entry of the Resident Evil franchise. Now, my review is here.

I last reviewed a Resident Evil game back in February. So it’s been a little while since I set foot into the horrifying streets of Raccoon City. Having never played Resident Evil 3 until now, I really had no idea what to expect from this entry in the franchise. But it didn’t take long to get my head back into the game. This title is very reminiscent of the earlier entries in the series. The events of Resident Evil 3 actually start about 24 hours before the previous game. Resident Evil 2 follows the story of Claire Redfield and officer Leon Kennedy as they struggle to survive the hordes of zombies that roam the streets of ravaged Raccoon City. Resident Evil 3 on the other hand, follows the story of Jill Valentine, one of the heroes from the original game, as she also struggles to survive and and escape with her life. Since Resident Evil 2 and 3 take place almost concurrently, there is some overlap between the two games. Some locations from the second game are accessible in this title as well. But, the main characters of the two games never actually cross paths. During her escape of the city, Jill uncovers the terrible secret behind the virus that’s caused the outbreak and encounters a ruthless creature known as “Nemesis”. This infected beast was created by Umbrella Corp to hunt down any surviving STARS members with the intent to kill anyone who might be able to expose Umbrella’s role in the outbreak.

The introduction of Nemesis is what really sets this game apart from the other entries in the series. He’s a very formidable foe, that is encountered at semi-random intervals in the game. And it can almost mean certain death for a player who is unprepared. Now, along with the usual exploration, puzzles and zombie encounters, you also never know when and where Nemesis might appear. This actually gives the game an extra layer of tension that is certainly welcome. 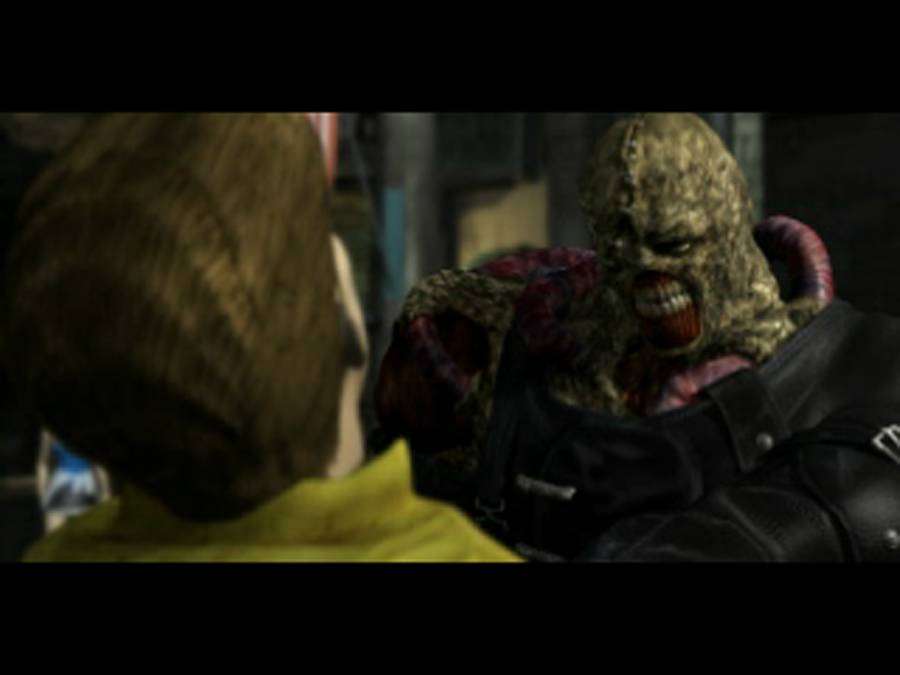 While very similar to the previous entries in the series, Resident Evil 3 also seems to inject a little more action-oriented gameplay into the franchise. For the most part, the gameplay experience is identical to Resident Evil 1 and 2, but this time there are many more enemies to be found. It’s not unusual to find yourself being backed into a corner by five or more zombies. When this occurs, you have little choice but to shoot your way through the encounters. Also, the battles with Nemesis will often require you to master the game controls as you will need to dodge his attacks while you flee or unleash an attack of your own against him.

Aside from these mechanics, the gameplay for Resident Evil 3 largely follows the same formula of the previous games. The graphics still consists of pixelated objects on pre-rendered backgrounds. The game also has some of the same faults as it’s predecessors: cumbersome inventory managements and clunky controls. 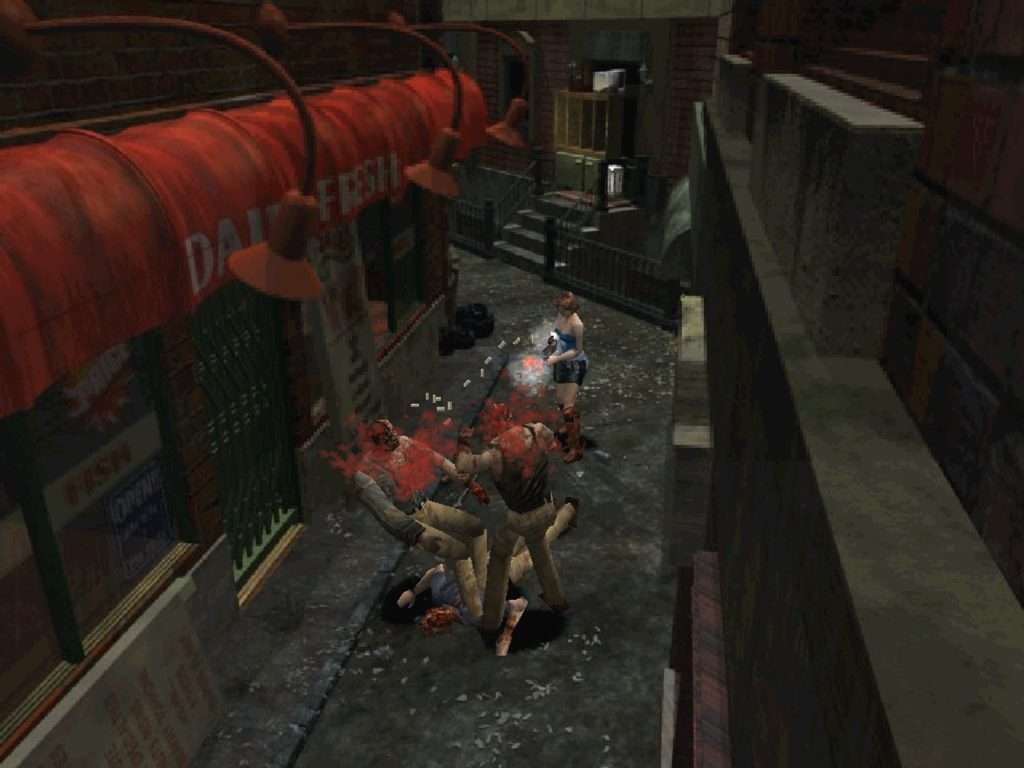 Upon completion of the game, a new playable mode is unlocked. This features a short mini-game where you can play as one of the Umbrella Corp mercenaries. There’s not much to it, but it’s addition is certainly welcome.

Resident Evil 3 makes for a fine addition to an already awesome series. But, despite all of it’s good aspects, the overall formula does start to show its age a bit in this title.  On it’s own, this game shines. But not quite as much as the first or second entry. The things that made the first games great are certainly present here, but by this point players have pretty much seen every trick in the “survival horror book”.  That being said, if you’re a fan of the genre, this game should not be overlooked. All in all, it makes a fine capstone to the original Resident Evil trilogy.

Being the last title in the series on the Sony Playstation, I’m very curious to see what the next generation platform holds for Resident Evil. I personally have never played any of the other games, so I’ll be experiencing them much like a new player would have upon their original release as I continue my generation playthroughs. 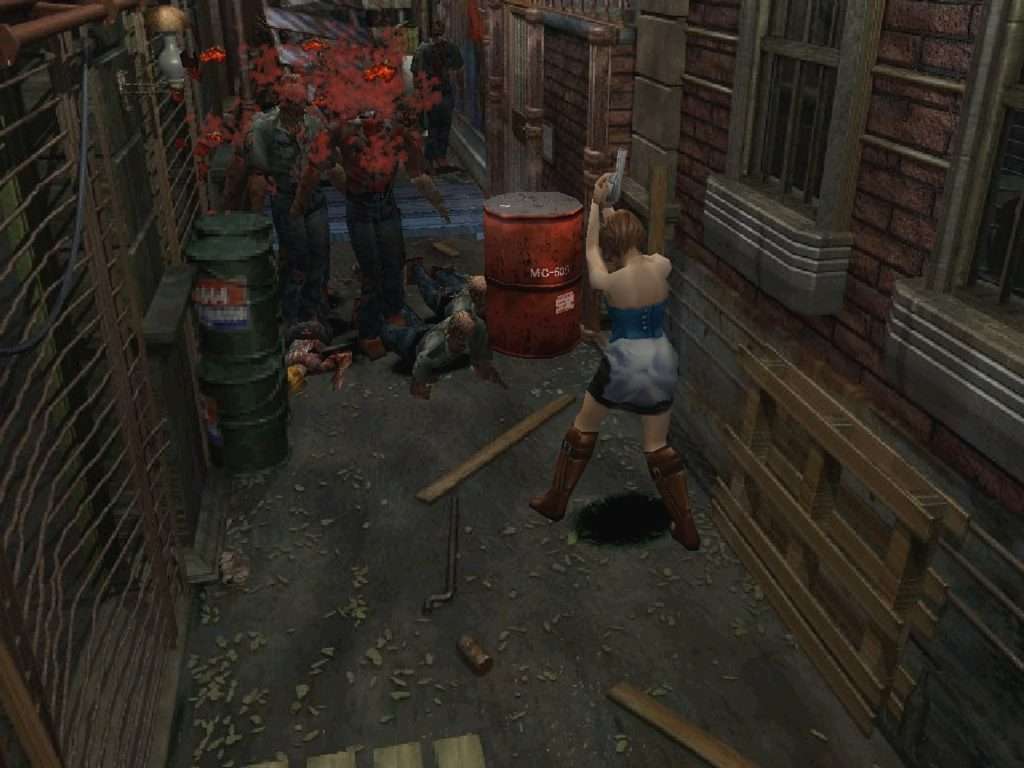 Difficulty: Variable –  There are two difficulty options in RE3. Easy and Hard. Easy mode essentially unlocks a majority of the game’s weapons and ammo and makes them available to the player almost immediately. It also makes some minor changes to the gameplay itself. While this can certainly be a boon for new players, I really recommend playing the game on the default difficulty if you’re a Resident Evil veteran. The encounters with Nemesis are more meaningful on hard mode and the added difficulty adds to the tension you’ll feel as you play.

Story: This game continues to shed new light on the T-Virus origins. It piggybacks very well on the backstory presented in Resident Evil 2. The very end of this title provides an amazing cliffhanger and a great set up for future entries in the series. As someone largely ignorant to future entries in the RE universe, I can’t wait to see where things are going. The storyline is probably one of the strongest elements in the game.

Originality: This title follows the tried and true method of the first two games with a few new twists. The biggest changes here are the encounters with Nemesis and options presented alongside his appearance. Other than that, if you’ve seen either of the other games, you already know exactly what to expect.

Soundtrack: Just like with the first two games, the soundtrack is very minimal. The music is sparse and often used as a tool to build tension. But, when there is music to hear, it’s appropriate and atmospheric. The game also uses ambient sounds to help set a spooky tone. All of it is very well done. The voice acting is on par with those from the other two games (which leaves a lot to be desired, honestly).

Fun: Resident Evil 3 is a fun and welcome entry to a classic franchise. It doesn’t hold quite the same magic as the first two entries. But fans of the series will be more than happy with what’s in store for them.

Graphics: The pixelated graphics and the low resolution FMV movies are very dated by today’s standards. But at the time of the release, they were considered very well done. Resident Evil 3 does a great job with what it had to work with to create a spooky and exciting game.


Playcontrol:  Again, this is one of the weakest points of the game for me. This seems to be an issue that does not go away. But, to be honest, it really is simply a sign of the times. The characters in the game is controlled using the old, clunky “compass rose tank” style of movement. Players used to modern 360 degree movement will need some time to get adjusted. Overall the controls feel stiff and antiquated. But in the long run, they are manageable with a little practice.


Value:  This game is available as a PS One Classic on the Playstation Network for $9.99. Even today, this price is worth it considering the size and content that game provides.

Overall score (1-100): 75 – Resident Evil 3 is a classic, stellar game. But it’s  not without its faults and its just a bit weaker than it’s predecessors. The new additions keep the game fresh enough so as not to feel like an old retread. But the game also manages to milk the cow of it’s very last drop. It’s a must-play for fans of the series, but a new player would be better advised to check out one of the previous entries if they want the best experience.