It’s been a long time coming, but my review of Majora’s Mask is finally here! I last reviewed a Zelda game back in February of this year, when I played through Ocarina of Time. This review also marks an important turning point in my history, as this is my very first playthrough of Majora’s Mask. That’s right, I’ve actually never played this title before! Which is a shame as this game ranks right up there with Ocarina of Time in terms of being a classic N64 title.

Just like with Ocarina of Time, gamers who want to experience this title today essentially have two options. They can either play the original version on the Wii U Virtual Console or they can opt for the slightly modernized 3DS version. For the sake of this playthrough, I spent a little time with both versions and again, I found the new Majora’s Mask 3D to make the most sense. I feel safe in declaring this to be the current Definitive Version of Majora’s Mask. Aside from improved graphics, and some minor button assignments/playcontrol tweaks, the games are virtually identical. The biggest changes between the two versions are a number of revamps to boss fights and some minor changes to item locations, etc. But in most cases, I found these changes to actually be a true improvement on the original game.

Also, I once again find the 3DS version to offer vastly improved playcontrol over the N64 version.  I’ve always had issue with camera control on most Nintendo 64 games, and while Majora’s Mask doesn’t suffer from these problems as bad as Ocarina of Time, the camera controls on the N64 version still feel janky and choppy to me. This is not an issue on the 3DS version.

Majora’s Mask is a very strange entry in the Zelda franchise. Technically, it’s a direct sequel to Ocarina of Time, but it’s much darker that any other entry in the series. Plus, it seemingly takes place in a whole other world; Termina. Yet, this new world is populated with characters that will be familiar to players of the previous games. These inconsistencies have led to several fan theories over the years. Some of which suggest that the events in this game are a dream or perhaps even take place in the afterworld after Link has suffered some untimely demise. However, new games in the franchise have cleared up a lot of the obscurity regarding Termina in recent years. But that’s a story for another day.

The game starts shortly after the events of Ocarina of Time. Link is on a quest to find his missing fairy friend Navi, when he encounters a strange mask-wearing entity in a dark forest. This person, known as Skull Kid, attacks Link and curses him, turning him into a creature known as a Deku Scrub. Link chases the Skull Kid through a cave and into the strange world of Termina. Here, Link runs into an old “friend”, the Happy Mask Salesman. He explains that Skull Kid has stolen a powerful mask that gives him unusual and dangerous powers. The Skull Kid is using this power to bring the moon down from the sky. If he succeeds, the moon with crash to the world killing everyone. All of this will happen within three days. Link must embark on a quest to wake up four powerful giants. The giants together will be able to prevent the moon from making landfall. Only then, will Link be able to confront and defeat the Skull Kid.  Of course, it will likely take much longer than three days to accomplish everything that needs to be done. So, the Happy Mask Salesman teaches Link the ability to manipulate the flow of time.

In a number of ways, Majora’s Mask is very similar to it’s predecessor. The game controls are nearly identical, and the overall style of play is largely unchanged. The biggest change in Majora’s Mask, and what sets it apart of every other game in the franchise is the “three-day” mechanic. As you play the game, time passes in Termina. The game is split over three different days. If the clock runs out on the third day, the moon crashes to the world and the game is over. Link can save himself by playing a special song on his Ocarina and warping back in time to the morning of the first day. However, doing so will cause him to lose some items he’s collected and will reset some in-game events.  Normally, I’m not a fan of these “race against the clock” mechanics. But it’s actually very well done in this game. Plus, as you play you’ll eventually learn new abilities that allow you to both slow and speed-up the clock to your advantage. So, in the end it’s not really a big hindrance.

As the title suggests, a big part of the game revolves around collecting and using different masks. When Link dons a mask, he gains special abilities or sometimes even transforms into a different person/creature. These mask are key to unlocking new areas and progressing through the game.  The mask system and the “three day mechanic” are the two things that set this title apart from other entries in the Zelda series. Aside from these two mechanics, the gameplay will be very familiar to fans. The core game involves exploring areas, entering dungeons, solving puzzles and defeating bosses. It’s the classic Zelda formula with a new twist. These changes actually manage to make Majora’s Mask a very fresh and unique addition to the series.

When I first started playing this title, I felt a bit overwhelmed. It was certainly Zelda, but it felt tainted… The whole vibe of the game seemed off at first. I can imagine that some players might feel a bit turned off when picking up this game for the first time. The overall mood of the game does not match what most players would expect from a Zelda title. It’s hard to explain, but it’s there… However, after a few hours in, things do start to come together and make a bit more sense.

All in all, Majora’s Mask is another fantastic entry in the Legend of Zelda series. In some ways, I feel like it ended up being a bit of playground for the game developers. A place where they could try new ideas or concepts. It feels very experimental to me. But, that’s actually a good thing. It takes the winning formula that is Legend of Zelda and pumps just enough “funky mess” into it to keep fans from feeling bored. 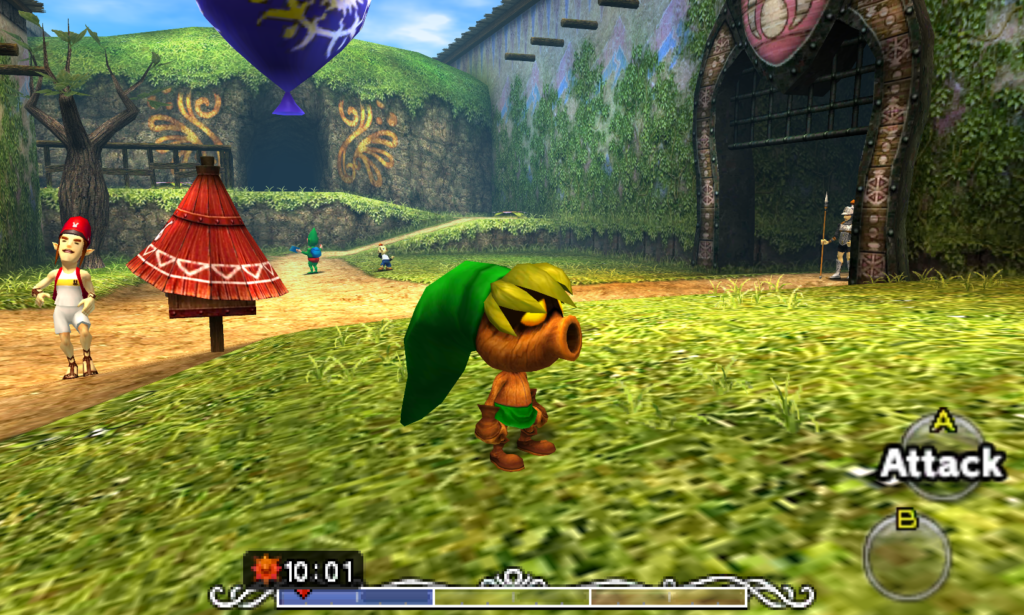 Difficulty: Medium –  As typical with Zelda games, Majora’s Mask has a one-size-fits-all difficulty level. The game starts off relatively easy and progresses in difficulty as it goes. Most of the challenge in the game comes in the form of various boss fights or solving dungeon puzzles. For a first time player, several of these encounters can be very frustrating at first. But as typical with most games of this type, each battle has certain mechanics. Once learned, these battles become much easier. The new time mechanic adds a little extra layer of difficulty and frustration to this title, but again there are ways to soften the blow that the clock can bring. Players willing to take the time to explore and complete the optional side quests will also have a much easier time.

Story: The storyline here is a big departure from anything seen in the Zelda series thus far. But if you’re willing to really follow the breadcrumbs of lore found in the game, it’s actually quite an in-depth and interesting story. The Skull Kid and his world of Termina are very psychological. There’s a lot of subtle things going on. This game features a storyline that rewards you as richly as you are willing to invest yourself into it.

Originality: This title features the gated/progression style that players familiar with the series are already accustomed to. It also piggybacks off the the 3D elements introduced in Ocarina of Time. What sets this game apart from other titles is the certainly the mood and time limitation mechanics. These two simple things really make Majora’s Mask seem fresh and new, despite building off the foundation laid by Ocarina of Time.

Soundtrack: As is typical with a Zelda title, the music in this game is very well done. There’s familiar themes and melodies found in Majora’s Mask, but also a number of new tunes. The overall score has a more somber and mysterious tone than other games in the series. As one would expect, the game soundtrack is very well done, but in my opinion, it’s far from the best in the series.

Fun: Once you’re able to get your head around the mechanics of the game, Majora’s Mask is an excellent title. Even as a veteran player, it took me a bit of time to grasp and understand what exactly was going on. At first, I was not all that impressed. But as time went on, I found myself stopping and sitting in awe at just how fantastic the game actually was.

Graphics: At the time of its original release, the 3D graphics were state of the art. Majora’s Mask actually required the N64 Expansion Pack so the graphical textures are somewhat improved from that of Ocarina of Time. However, like many games from that era, the 3D graphics found here have not aged well. Playing the original game on the Wii or Wii U virtual console does give it a bit of a visual boost than playing it on the original hardware. For most players, I do recommend the 3Ds version. The graphics on this new version are not only sharper and less jaggy, but many of the textures have also been improved.  – I should also note that when playing 3DS games, I typically don’t play with the 3-D turned on. But like with Ocarina of Time 3D, the 3-D effects in this game were so stunning that I actually spent the majority of my time playing in full 3-D mode. (I played this on the New 3DS which features improved 3-D effects, so your mileage may vary)


Playcontrol: The original N64 version still seems to have some annoying playcontrol issues for me. Playing the original game on the Wii or Wii U Virtual Console nearly requires a Classic Controller, in my opinion. But even then, the game feels very “off”. The controls for the 3DS version are overall well thought-out and intuitive.  Having played this title on every available system, I have to declare that the 3DS offers the best playcontrol of the lot.


Value:  This title is available on the Wii U virtual console for $10. The 3DS version still sells for a premium price of $40. But, even at full price, the game is worth it for fans of the series.

Overall score (1-100): 80 – This game is nearly as perfect as it’s predecessor… but not quite. The best aspect of the game is also, oddly enough, it’s worst. The time-gated content and the funky vibe the game offers may actually put-off some players. Especially at first. I suppose my biggest caveat to this game is that it’s not a good Zelda title for first time players. But fans of the series should never pass up a chance to experience this title. It’s a valuable entry in the franchise. The game itself is right on par with Ocarina of Time as far as craftsmanship. It’s just… odd.