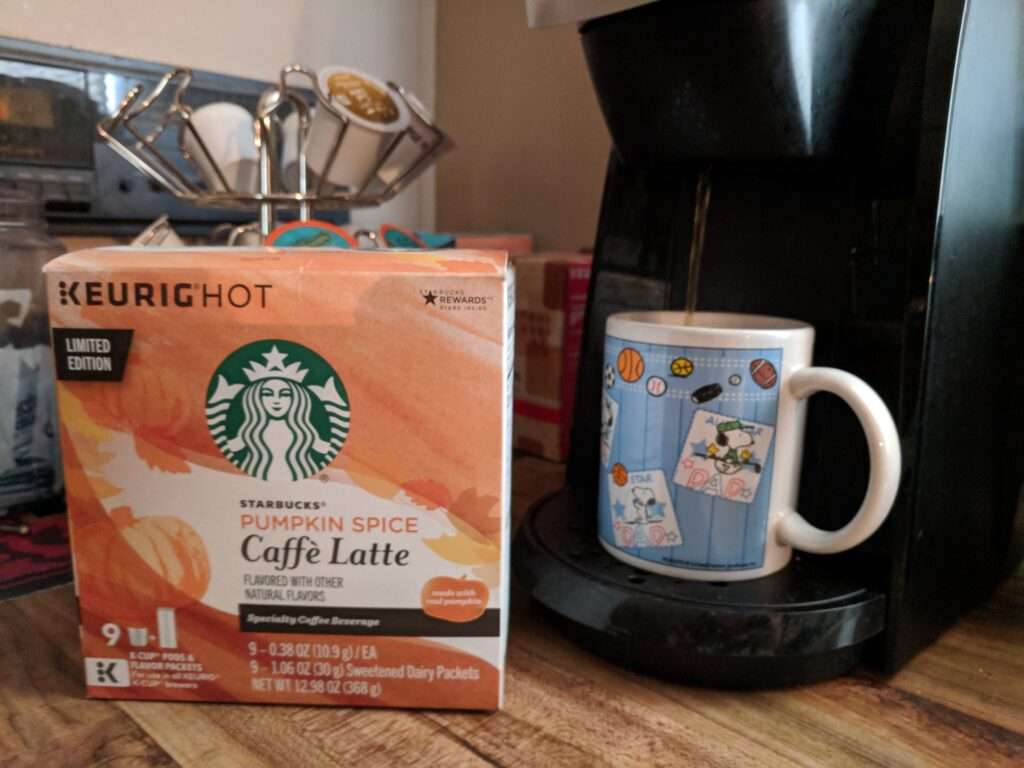 For this Nerd Fuel post, I’m going to break my tradition of reviewing standard coffee pods and take a look at one of those gimmicky “cafe latte combo packs”. Being very much a purist, I’ve been hesitant to pay much attention to these things. In case you don’t know what I’m talking about, aside from just standard K-Cups, some companies like to bundle coffee pods with special flavor or “froth” packets. The idea is to combine the contents of the packet with the brewed coffee from your Keurig machine and stir them together – resulting in a more “gourmet experience”. This sounds pretty cool in theory, but in practice the results are usually subpar. Due to the lack of fall seasonal coffees available in my area, I decided to bite the bullet and pick up one of these kits.

The box in questions is a Pumpkin Spice Caffe’ Latte from Starbucks. Now, let me be up front and state that I’m not really a fan of Starbucks’ Pumpkin Spice lattes. If I find myself on the go and it’s the right time of year, McDonald’s is actually my go-to. Their McCafe line is surprisingly good. I know that some Starbucks fanatics would crucify me over this – but I daresay they are better than Starbucks… So with that in mind, I didn’t really expect much here. But, I did REALLY enjoy the Starbucks Fall Blend. So, I decided to see what their other K-Cup seasonal was like.

So here we go. The way this works is simple. First, you empty the contents of the flavoring packet into the bottom of your mug. Then, you brew K-Cup just like any other coffee. Once it’s finished, you stir and enjoy. Being a cappuccino style beverage, there’s no need to add sugar or cream.

The smell of this mixture is very nice. It has a creamy, spicy smell to it. I was actually cautiously optimistic after giving my cup the nose test.

The coffee itself isn’t terrible. But it’s not all that good either. It had a watered-down, bitter taste that seemed be overloaded with nutmeg and other seasonal spices. There is a faint pumpkin aftertaste, but it’s not the dominant flavor in my opinion. It’s a very hard flavor to nail down. But, it’s not what I think of when I think of “pumpkin spice”.

The coffee is very drinkable, but I can’t say that I found it all that enjoyable. Being a specialty coffee, it costs a few dollars more than a standard box of K-cups. With this in mind, I can’t really claim it is worth either the trouble or the price tag. Fans of Pumpkin Spice would probably do better with a regular pumpkin spice coffee and an extra dose of cream.

So, the quest for the perfect “Pumpkin Spice” home solution continues…

Would Purchase again?: No.  A little pricey for something that tastes like lukewarm pumpkin and a cinnamon dishwater. I’ve had worse, but I’ve also certainly had much, much better, for less.