This is a review that’s been a long time coming. I mean that in several ways. First, the game itself was delayed for over a year before it finally saw a release. Second, I wanted to spend a good amount of time getting my hands dirty with it before posting a review. As many of you may know, King’s Knight is a mobile tie-in to Final Fantasy XV. Throughout XV, you occasionally hear the character’s banter about playing a video game called “King’s Knight“. Well, this is that game. But, it’s also much more than that. King’s Knight has a very interesting history.

Let’s start by mentioning that this is not the first “King’s Knight” game. The original King’s Knight was a game published by SquareSoft on the NES. It was a commercial and critical failure. However, despite being almost universally panned, many gamers (myself included), have often felt that the game had potential. But, it seemed largely rushed and unfinished. I suppose SquareEnix felt the same way. Because now, eleven years later they have brought us a sequel: King’s Knight – Wrath of the Dark Dragon. This is a mobile title that is available for Android and iPhone devices.

Now, don’t feel like you have to torture yourself with the original game just to understand the new version. In fact, as part of the tutorial you essentially play through a condensed version of the original game. So you’re getting the full story without even seeking out the original title.

Wrath of the Dark Dragon was originally announced alongside Final Fantasy XV. Shortly thereafter, a localized beta was available to players in Australia. However, due to largely negative feedback from testers, the full release of the game was delayed by over a year. Finally in September 2017, the game was released worldwide.

King’s Knight: Wrath of the Dark Dragon tells the story of RayJack and his companions as they quest and explore the kingdom. Keeping it’s citizens safe from monsters and the ever-looming threat of the Dark Dragon.

The game is an overhead action shooter with RPG elements. Each level consists of an overhead, scrolling field filled with monsters, destructible environments, treasure and power ups.  Once players reach the end of the level their performance is tallied and rewards are granted. Some levels feature powerful boss monsters. Different monsters are weak to different attacks. So it is crucial to have a number of characters available to ensure success. 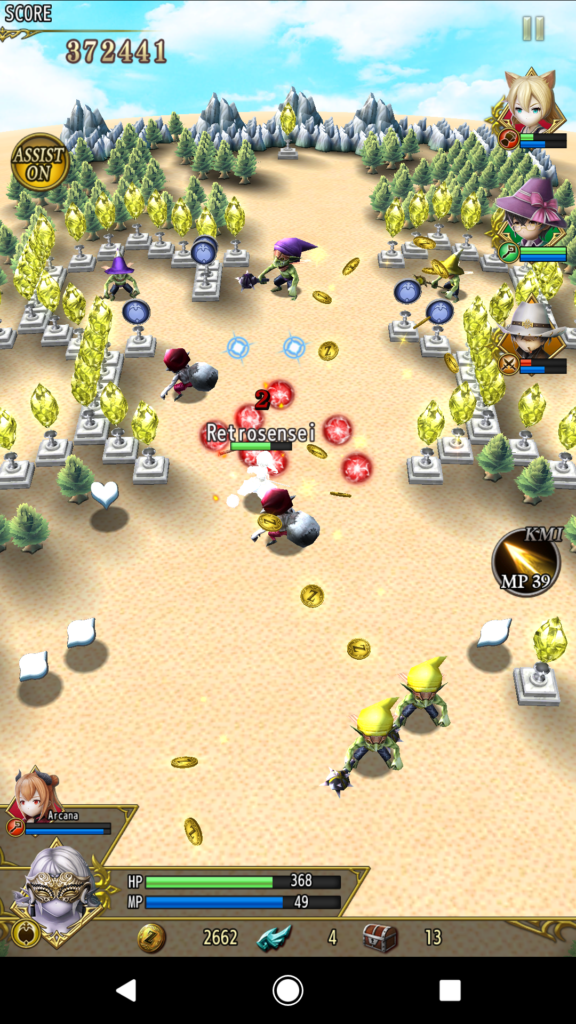 Obtaining new characters is done a number of ways. Some are granted by completing special quests. But the primary way of unlocking new characters to play is through the in-game shop. Yes, like most mobile games, this one has a GACHA element. Players can spend a special in-game currency for a chance to obtain a random characters. They might win a new and powerful character or a weak, duplicate of one they already have. It’s a random grab bag system. This same element applies to weapons in the game as well.

Characters are leveled up by using consumable training books and abilities are unlocked through the use of consumable items. Most characters have a special playable quest or story-arc. So, unlike many games of this type, there is at least some lore-based value to obtaining them. It’s not all pay-to-win. 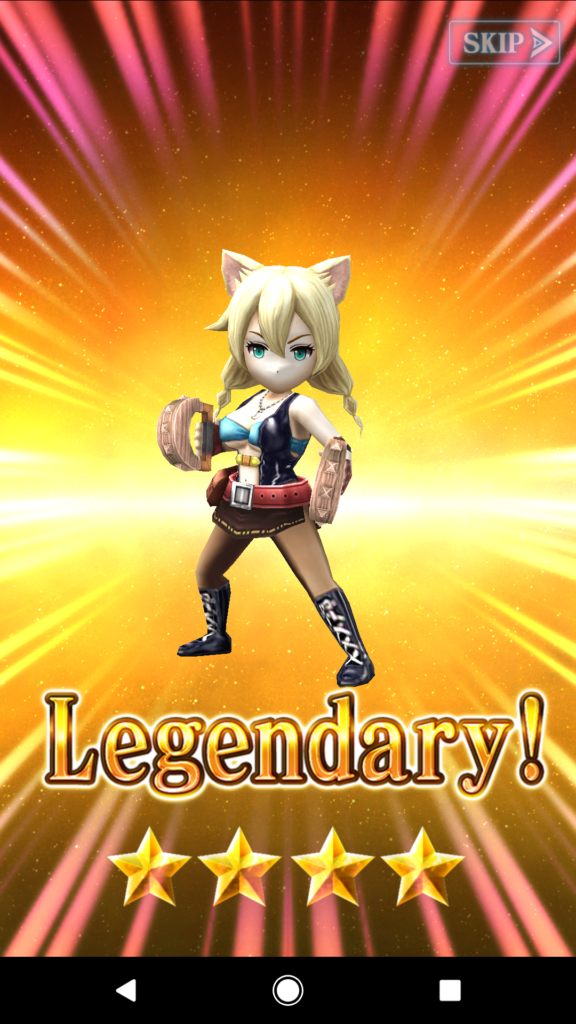 I’m posting this review in November, 2017. If you’ve not already dived into this game and have a serious interest to do so, now is the best time to start. Most of the new-game bonuses are still available to new players. The Regalite currency is still being given away in large amounts at this time. So it’s very easy to build up a good roster of characters without spending any real money. To be honest, I’ve not spend a dime and I already have several legendary characters and weapons.

The game itself is actually very entertaining. I like the storylines, the events, and even the gameplay. However, there are definitely some quirks with the playcontrol.  All in all, I’m very impressed with the title. As far as cash-grab games go, all of the typical money sinks are here. But, the game doesn’t rub your nose in it like some do.

I guess my biggest disappointment is that despite being marketed as so, the game has no real ties to the Final Fantasy universe. But, I suppose that’s ok.

King’s Knight is a fun time waster with a surprising amount of content. But don’t expect an extremely engrossing RPG experience. 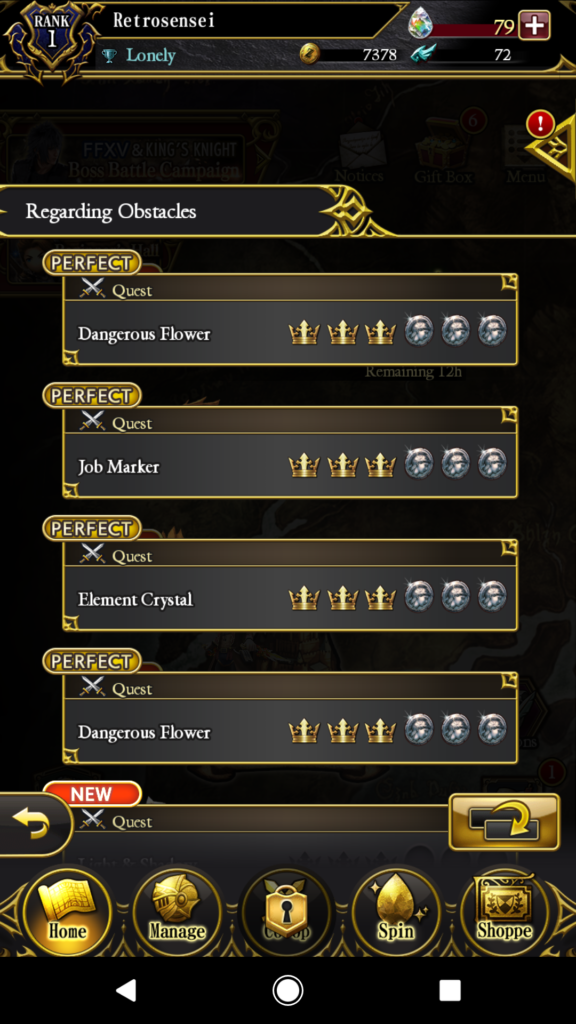 Difficulty: Medium –  Overall, many of the standard quests in the game are quite easy.  Playcontrol presents the biggest challenge at first. The early quests and scenarios are pretty simple. But as you progress the difficulty does ramp up. If you plan to try to score “perfect” on every stage, you’re almost certain to find yourself tempted to whip out your wallet to purchase currency for resurrections, etc. RESIST THE TEMPTATION. You can enjoy the game in full for free. The difficult content is there to drive sales.

Story: The storyline of this game piggybacks off of that found in the original King’s Knight. It expands on it vastly, offering a surprisingly rich story for a mobile game.

Originality: This version of King’s Knight is very much a modern refinement to the original game. Which, in itself was actually a pretty original concept. Considering that many players will have no experience with the original title. This game will feel like a pretty fresh experience.

Soundtrack: The score to the game is very well done. Most of the tracks are sourced from the original game but now fully orchestrated and modernized. It has a very epic, fantasy feel.

Fun: I personally enjoy this game a lot more than I expected to. I try to get in a few rounds each day. I participate in the special events. It’s a great bit of entertainment for zero cost.

Graphics: The graphics in this game are very well done. It’s colorful, fun and all around great for a mobile game.


Playcontrol: This is the biggest problem. The game has two control schemes: one hand play and two-hand play. Far and wide I recommend playing with two hands. This is even easier if you have a bigger phone. The game is played with a virtual d-pad and two buttons. It takes some getting used to and even then, then controls feel a bit sloppy. But with some practice it does become manageable.

Downloadable Content: In-game currency can be purchased with real money. The game receives regular free updates and features special limited time events. – Buyer beware!   There is a “Data Transfer” option that allows you to move your saved data between devices, but I’ve found it not to be very reliable.

Overall score (1-100): 70 – A well done, fun, gacha game for mobile devices. The cash store seems overpriced for what you get. But the game itself is entertaining and very well done. Playcontrol issues and the odd difficulty curve prevent me from giving this game a higher score.