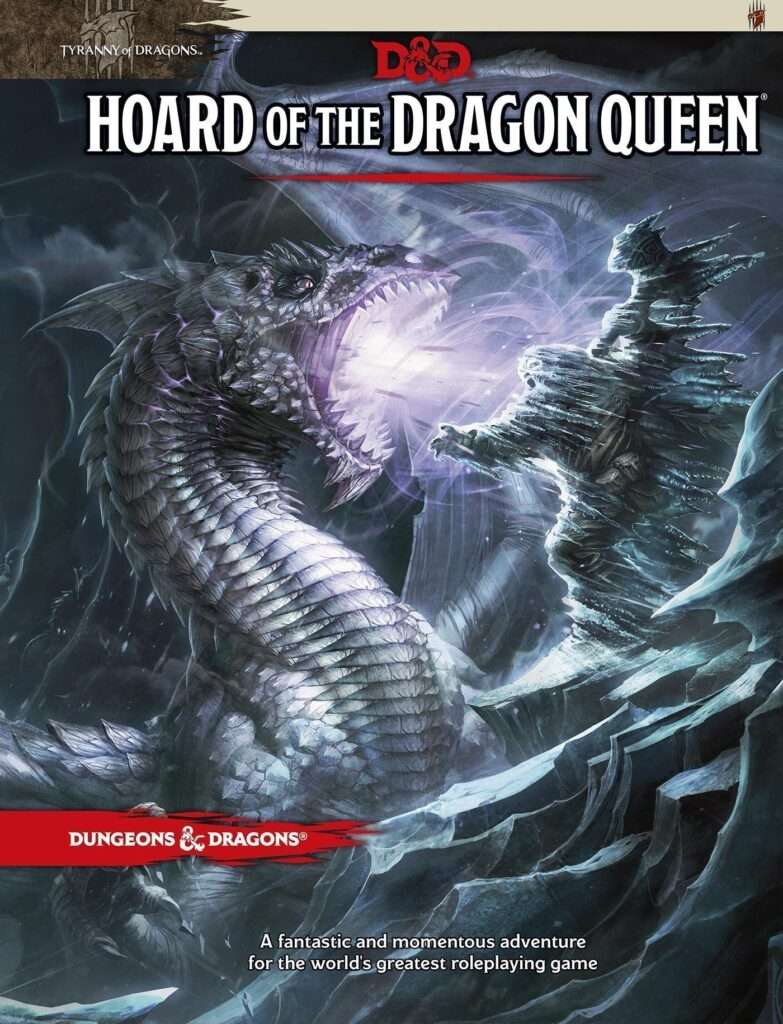 As promised, I’m making my first post playing catch-up with the current line of D&D releases. So far, I’ve touched on all of the core rule books and even a couple of the supplements.  This will be my first post on an official “module” or adventure. Now, I want to state up front that this is not a review. But rather a summary of the product itself. In this case, I have actually played through this particular module. But I won’t be able to say that for many of the books I’ll be touching on in the near future.

Hoard of the Dragon Queen is the first adventure published for the 5th Edition Dungeons & Dragons and it is the first chapter of the Tyranny of Dragons campaign. A few years ago, when I participated in an official sanctioned game, this was actually the storyline that we played through. This module takes place in the Forgotten Realms world (the official setting for 5th edition) and it is designed for players of first level. By the end of the adventure players are expected to reach 7th or 8th level. So it takes a character pretty far along in their career.

The module focuses on the Cult of the Dragon; an evil group working to summon the ancient demonic dragon Tiamat.  The main goal of the adventure focuses around the players uncovering and attempting to stop this evil plot.

This adventure features many classic D&D elements. It’s filled with classic monsters and locations. It’s got a little bit of everything. There’s good opportunity for role playing, NPC interactions, dungeon crawling, etc. However, many have expressed that the adventure seems very “firewalled”. Meaning, it really pushes players to follow a pre-set expectation. There’s an encounter early in the story with an extremely powerful monster. One that most players will realize there’s no way to reasonably defeat. Therefore, most players will rightfully assume that they have “story immunity” and as a result don’t take the encounter seriously. These types of encounters can certainly occur in any Dungeons & Dragons game, but it often requires a very skilled DM to be able to make the scenario seem believable. Otherwise, it comes across as being cheesy.

All in all, Hoard of the Dragon Queen is a pretty good opener to the fifth edition of Dungeons & Dragons. It’s very epic in scope. Some argue it is perhaps a little too ambitious for an introduction to the hobby. I say that all depends on the skills of the individual hosting the game.