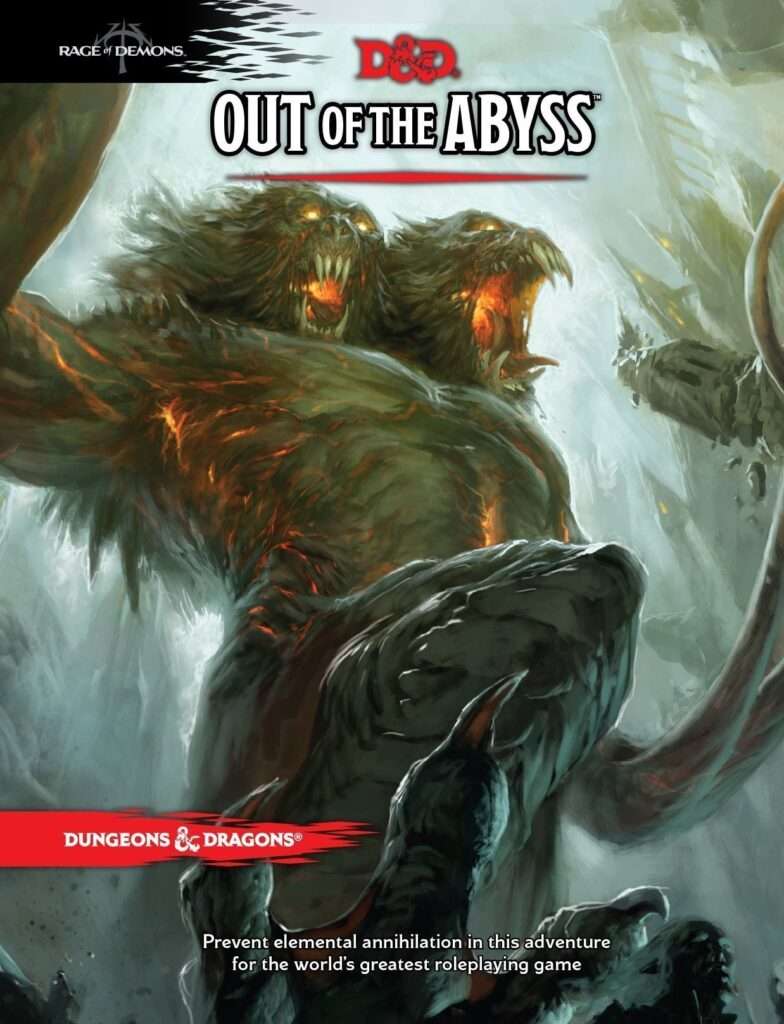 Next up in D&D product lineup is another adventure/campaign: Out of the Abyss. This is adventure is part of the “Rage of Demons” campaign, and was designed to give modern players a heavy dose of 1st edition nostalgia. It pits players against classic fiends and monsters, straight out of the pages of early first-edition texts.

This module is set in the Forgotten Realms and designed for players level 1-15. However, despite starting at a low level, it’s not one that is recommended for beginners. The open-ended feel and campaign-specific ruleset would likely end up being too much of a challenge for rookie Dungeon Masters. Even the content of the adventure itself is best enjoyed by experienced players. Being an adventure that pits players against demons and other powerful creatures, it will be all to easy for inexperienced players to find their brand new character dead and gone after just a few sessions. This one will require some thought and discipline to complete.

That being said, what we have here is a very memorable adventure that takes place almost entirely in the Underdark. The book contains official 5e stats for a handful of classic Underdark monsters as well as official stats for some legendary demonic characters. So, it can also be quite a valuable resource for DMs who are looking to add to their fifth-edition library – even if they don’t plan on running the campaign itself.

As usual, I’m not giving a chapter-by-chapter review of the adventure, as I haven’t actually played through it. But after studying the product in detail, I’m excited to see that Wizards of the Coast is actually making good on their promise to make 5E a version of D&D that will appeal to players of all generations. Being a huge fan of 1E, this product really hits all the right nostalgia buttons for me, while managing to stay true to the modern ruleset. This is one that I cannot wait to experience in the future. But before I tackle an adventure of this magnitude, I feel like I will need a little bit more experience under my belt.