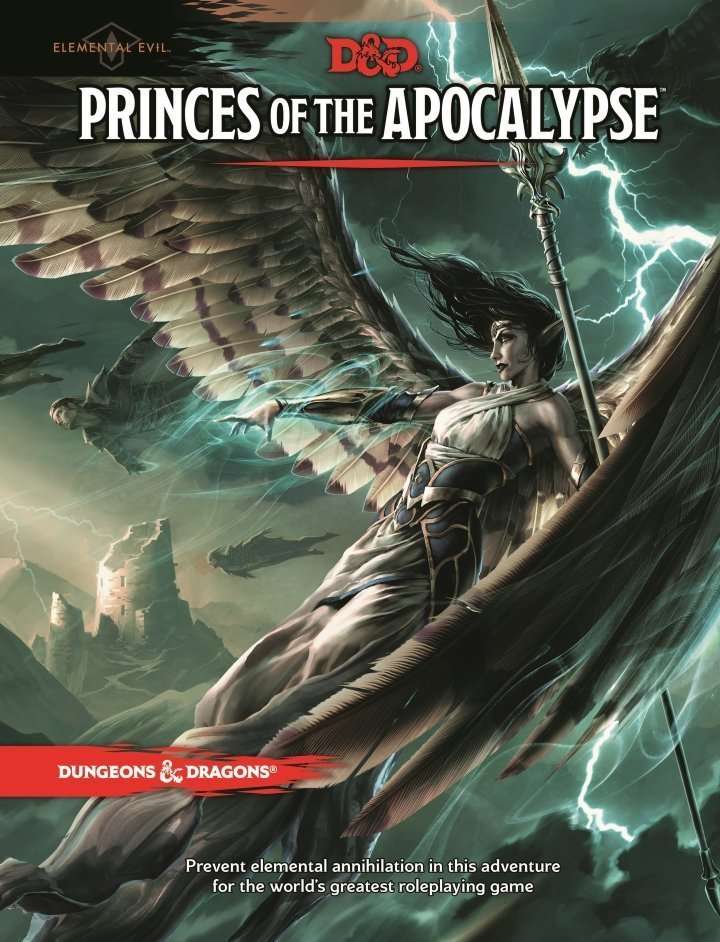 Moving right along with my summary of 5E Dungeons & Dragons releases, we have the third official adventure (and second campaign) released by WoTC: Princes of the Apocalypse.

This adventure is part of their “Elemental Evil” campaign. This might sound familiar to long time players… The Temple of Elemental Evil is a classic, heralded adventure from back in the 1E days. This release is a bit of a re-modernization of that classic adventure. But, rather than being a simple 1e-to-5e conversion, this release takes the basic premise of the original story and adapts it to Forgotten Realms setting. So, while the core concept is the same, the locations and situations are radically different. This makes for a new a refreshing experience, even for long time players are are familiar with the lore behind “elemental evil”.

This adventure is designed for players of level 3 and will take them all the way up to level 15. However, this book also contains a special section that includes a number of mini-adventures and sidequests, that can easily be adapted for level 1 players. These serve as the perfect buffer, allowing DMs to run their players through these scenarios – in order to toughen them up enough for the main quest. There’s even a hook provided in this book that ties in to the sample adventure included in the D&D Starter Set. So players who have cut their teeth on that adventure, will feel right at home with Princes of the Apocalypse.

In many ways, this release represents a step up from some of the errors and criticisms seen in the prior Tyranny of Dragons campaign. First, we have the entire storyline packed into one book, instead of being spread out between two separate releases. Also, it seems to dwell in the nice middle-ground between being an “on rails” campaign and a bit of a sandbox.  Something that is sort of a “best of both worlds” for all DMs.

This release also includes an appendix that features some new spells and a new optional playable race. However, it’s worthy to note that this is merely a condensed version of Elemental Evil Player’s Companion that was released online for free.

In a nutshell, Princes of the Apocalypse does a fantastic job of taking the modern version of D&D and giving it that classic old-school feel.  Personally, I’d have preferred to see this as the debut adventure for 5E. In my opinion, everything that’s great about D&D is represented right here.