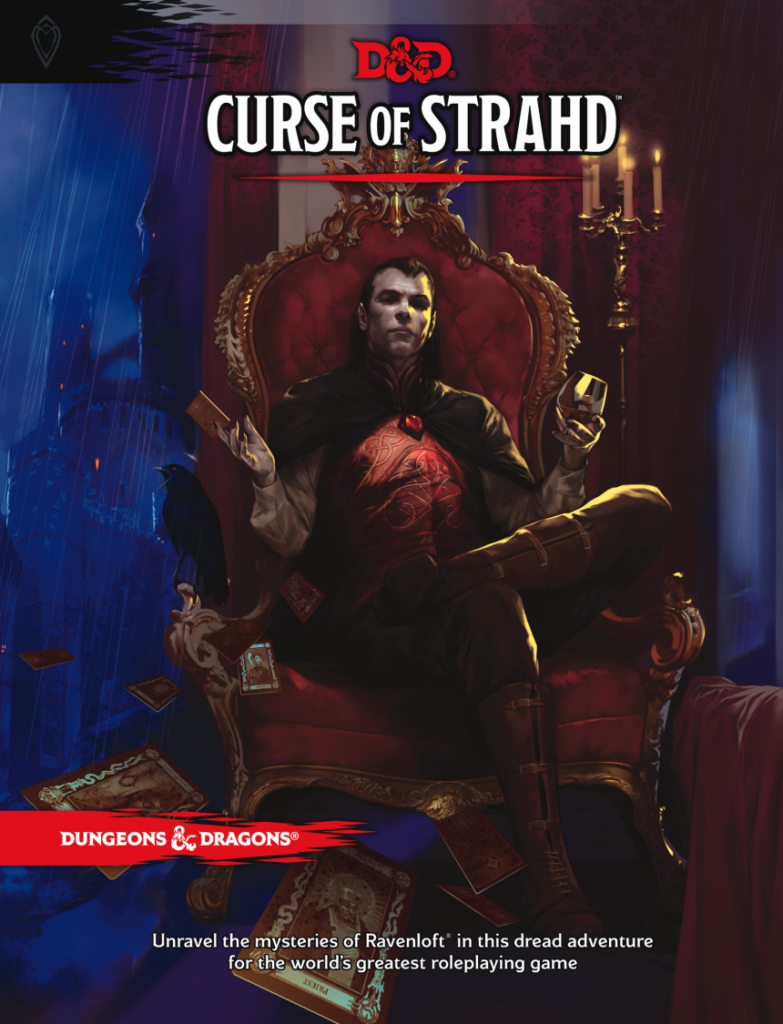 My first Dungeons & Dragons post of the new year is a look at the long awaited adventure: Curse of Strahd. For those of you who might not know, “Strahd” is a popular villain. Count Strahd von Zarovich is an infamous vampire. Essentially, he’s D&D’s version of Count Dracula. He rules over the mysterious country of Barovia (which is actually not a country, but its own demi-plane), from his castle Ravenloft. This adventure is actually a 5E remake of the original “Ravenloft” module that was released back in the days of 1E. When I learned that Wizards of the Coast were modernizing Raventloft for fifth edition, I was elated. This is an adventure that I had read about countless times, but never had the opportunity to play or host.

Curse of Strahd is the first 5E product that doesn’t take place exclusively in the world of Forgotten Realms. Instead, players find themselves mysteriously trapped in the plane of Barovia. Their goal is to escape and return to their homeworld. The book does include a few mini “hook adventures” to help DMs get the players to Barovia. One of these is a Forgotten Realms specific hook, (so we still haven’t broken those Forgotten Realms chains completely). The adventure is designed for players of level 1-10.

Curse of Strahd is a very open-ended adventure. The entire story takes place in a relatively small area, but players are not railroaded down a particular path. The flow of the adventure is unlike anything published for 5E thus far.  This can make the adventure a bit of a challenge for rookie DMs, so be warned.

With that being said, it is the mood and setting of this module is what really sets it apart from other adventures published so far.  This is a classic horror campaign and it’s done very well.  Instead of a medieval swords & sorcery, this adventure has a very “Transylvanian Gothic” feel to it. Personally, that is a something that I find very appealing. And I’m not alone in that assessment. Barovia was so popular at one time, that back in the 2E days, it was even given its own campaign setting: Ravenloft.

This is an adventure that I can’t wait to experience firsthand. But, just like with the previous adventure Out of the Abyss, I’m certain I’ll need a little more experience before trying to DM something on this scale. But the day will come! I’m glad to see WOTC modernizing and reprinting some classic modules, I hope the trend continues