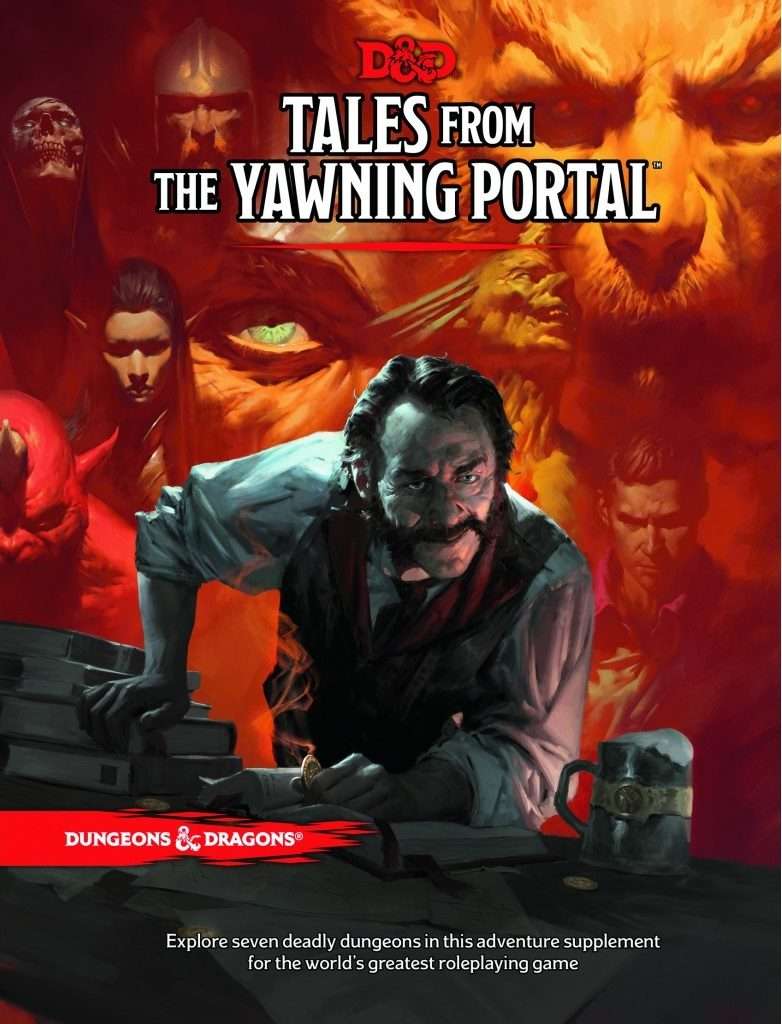 We’re almost caught up with our look at Dungeons & Dragons products. Today, I’m going to talk about a book that I’m super-excited about; Tales from the Yawning Portal. This book is a collection of classic dungeons that span all ages of D&D. Here they have been archived, polished, and given the official 5th edition treatment. Let me be clear and state that this book is not an adventure module. It’s also not a cover-to-cover campaign. But rather what we have here is a Greatest Hits collection of classic D&D dungeons and scenarios.

So, with that in mind, what does this book actually contain? Well, here’s a breakdown of the dungeons included in this product:

The Sunless Citadel – Originally published for 3rd Edition, The Sunless Citadel was an instant classic. It’s often been said that the original adventure is what brought D&D back into the mainstream in the early 2000’s. This is an adventure designed to take players from Level 1-3.

The Forge of Fury – A sequel to The Sunless Citadel. This adventure piggybacks off the previous classic. The contents of this module will take players from level 3-5.

The Hidden Shrine of Tamochan – This is an old one, dating back to 1979! First edition D&D at its origin. Originally a Greyhawk adventure, this dungeon has a very Mayan feel to it and focuses on traps and out-of-the box thinking. This is a classic, tricky dungeon crawl designed for 5th level characters.

White Plume Mountain – Another classic 1e dungeon filled with traps, monsters, and old school tropes. This one is a long time favorite of grognards like myself. In fact, this was the first D&D experience I ever had as a player back when I was about twelve years old. This version of the dungeon has been tweaked for 8th level players.

Dead in Thay – This module was originally invented during the 5th edition playtest as part of the D&D Encounters series. It has been modified for home play and slightly redesigned for 9th level characters.

Against the Giants – This adventure is actually a combination of three classic pre-1st edition modules. They have been refined and linked into one full-scale adventure. Again, this is CLASSIC retro D&D. I can’t stress how excited I am to see this in modern print. This adventure is designed for players of 11th level.

Tomb of Horrors – THIS IS IT! The one that started it all. Tomb of Horrors is one of the most revered and celebrated dungeons of all time. Finally, it has been officially modernized and brought to print for 5e players. This dungeon focuses more on role playing and tactics than simple hack and slash. It’s a brutal, unforgiving deathtrap that is designed to be undertaken by high level characters.

As you can see, the adventures found in this book are not presented as part of an arching storyline, but rather they are intended as standalone encounters that can be cherry-picked and inserted into any ongoing campaign. After several full 5e campaigns, I’m glad to see WotC has decided to step back and provide a collection of classic time-tested adventures that DMs and players can enjoy however they see fit.

This book also contains a small appendix of magical items and monsters, making it even more valuable for any DM’s collection. I personally look forward to running a number of these dungeons in the future once my home campaign gets started. In my personal opinion, this book is a MUST HAVE for any serious 5th Edition DM.