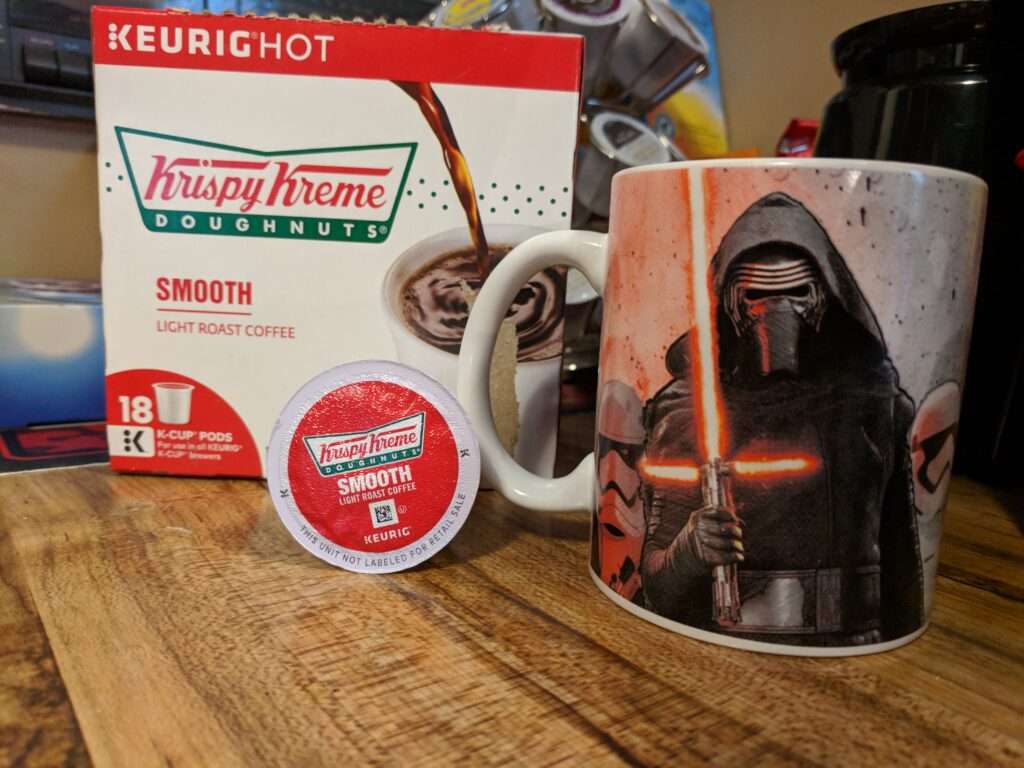 The first Nerd Fuel post of 2018 is here! As you know, one of my favorite types of coffee is what is known as “Donut Shop” coffee. Donut Shop style coffee is a basic, middle-of-the-road brew. It’s designed to please everybody. There’s nothing particularly special about it… But, it’s a bit a comfort food for many. In the US, coffee served at Dunkin Donuts is often the first brand to come to mind, plus its actually origin of the name “Donut Shop”. On this site, I’ve reviewed a number of “Donut Shop” style coffees and recently I was given a box of Krispy Kreme pods. This is a brand I’ve never sampled before. So let’s see how it holds up.

Of course, who in the US hasn’t had a Krispy Kreme donut? I’ve certainly had my share, but I’ve actually never bothered with their coffee before. My wife and I were given a box for Christmas, and one of the first things I did was tear into it. Right away I noticed that unlike most other Donut Shop style coffees, Krispy Kreme serves up a light roast instead of the standard medium roast. Or at least they claim to. To me, the coffee both looks and tastes like a medium roast. But, it doesn’t smell particularly strong. So, who knows.

Despite not having a powerful aroma, the coffee does have a nice fresh scent. The grounds certainly seem to be of a high quality. As far as taste goes, the name of this coffee is spot-on. It has a very pleasant and smooth quality to it. It’s flavorful and it has a surprisingly rich body to it. It was a pleasure to drink.

I honestly didn’t expect much from this brand, but it turned out to be a pretty solid brew. As far as Donut Shop coffees go, I actually like it a bit more than Dunkin Donut’s house blend. But, it still doesn’t beat out the champion Donut Shop Brand coffee in my opinion.

Would buy again?:  Maybe. To me, Donut Shop is the still king for this genre of brew. But if there’s none to be found, Krispy Kreme will certainly work a very solid second choice.