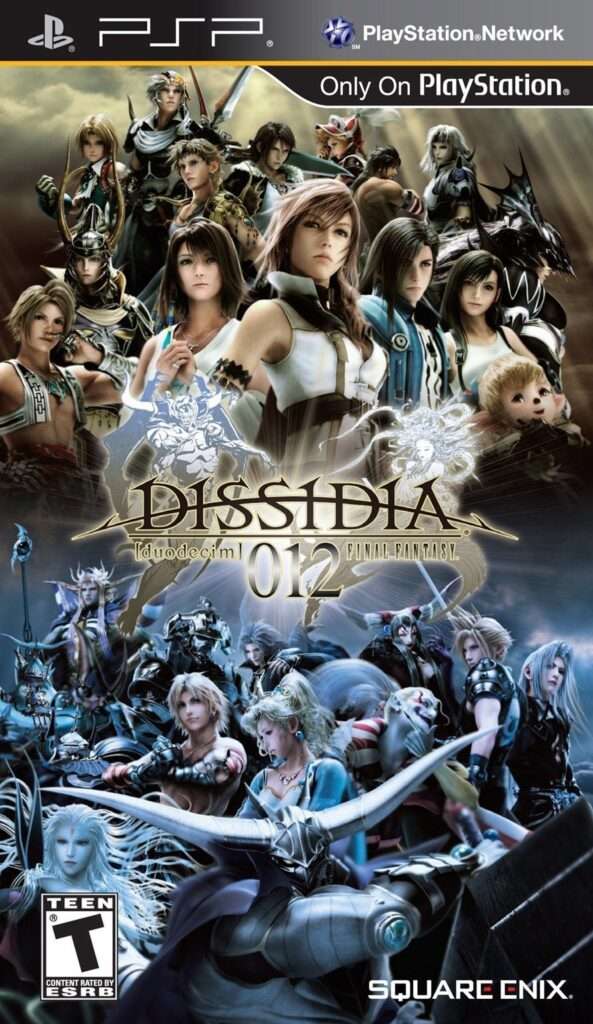 The release date for Final Fantasy Dissidia NT is just around the corner. So today, I present my look back at the biggest Dissidia title thus far; Dissidia 012.

This game is very similar to its predecessor.  In fact, it’s actually somewhat of a retelling and expansion of the first game. In the first title, the story revolves around an epic final battle between the gods Cosmos and Chaos. That decisive conflict is actually the thirteenth cycle of what has been an ongoing war between the two deities. Dissidia 012 actually starts during the twelfth cycle – so it serves as prequel. But then the game continues and actually retells the events of the original Dissidia. In this way, it can be argued that Dissidia 012 acts as a retcon to the original game.

Personally, that’s sort of the way I see it. The game itself is largely identical to the original, but with improvements, added characters, and newer features. Having played both, I feel that Dissidia 012 essentially makes the original title irrelevant. 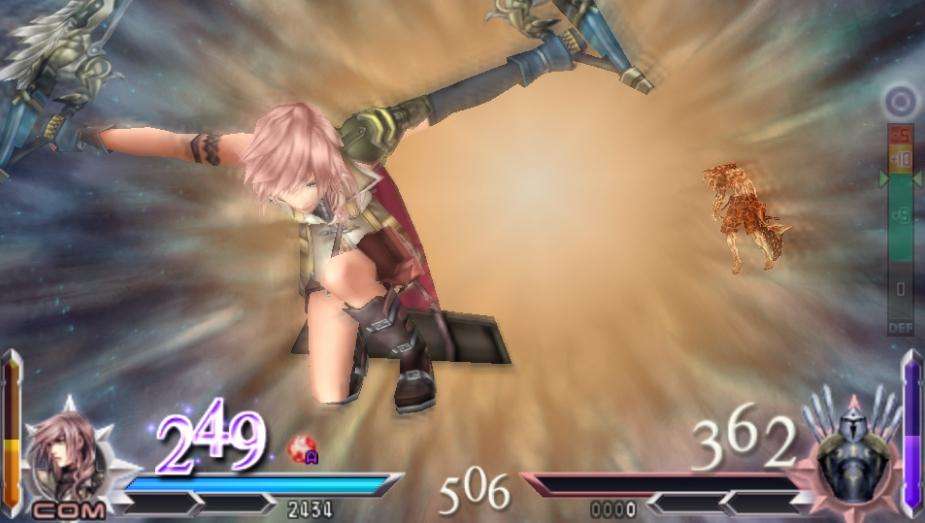 With that in mind, I’m going to focus this review on what is new and different. I’d rather do this than rehash nearly identical elements between the two games. So if you have not already done so, you may wish to check out my review on the original game here: Dissidia Final Fantasy.

Combat works in Dissidia 012 just like it did in the original title. However, some characters now have new special moves in their arsenal. Also, Dissdia 012 also offers a new “assist” option. This allows you to occasionally summon a second character to the battlefield to aid you in combat. I should stop here and mention that there’s also a special demo version of the game available for free on PSN (Dissidia 012 Prologus) . This demo is actually a prequel chapter to the main game. Completing the demo unlocks an additional Assist-Only character, Aerith from Final Fantasy VII and allows her to be imported to the retail game itself. Playing the demo can also unlock various items that can be imported to the main game. With this in mind, I consider playing the demo to crucial to the Dissdia 012 experience. 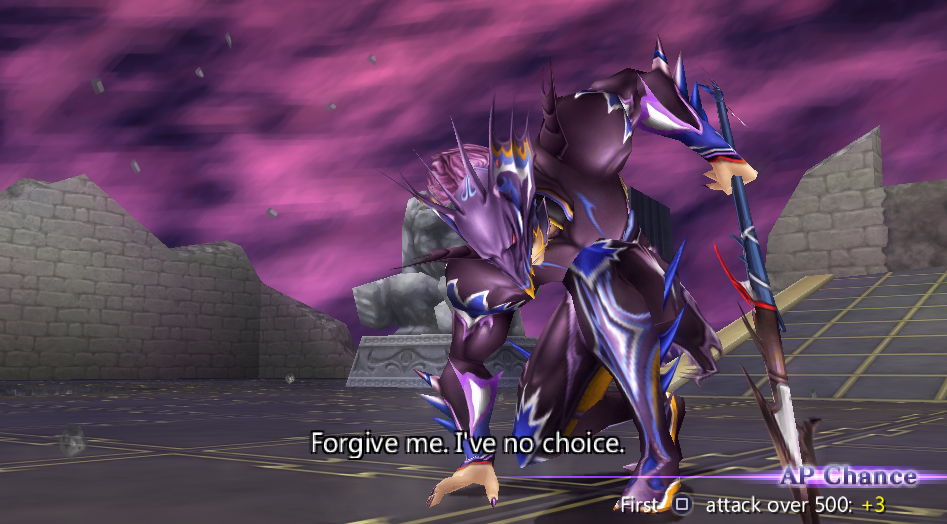 Despite cloning most elements from it’s predecessor. Dissdia 012 also introduces two big changes. The first being the addition of a World Map to the single player campaign. During the story mode, you can move around on an open world and interact with NPCs, hunt down random encounters or move to different battlefields. For me, this is a welcome change. It is reminiscent of older games in the Final Fantasy series, which is something that is near and dear to my heart. Second, this game also introduces an alternate mode of combat. Instead of controlling every move your character makes during battle, you can instead opt to play in “RPG mode”. With this mode enabled, your character acts on their own. However, you control what type of actions they will be performing using a menu. For example, you can choose to have them “Fight” which is equal to a Bravery Attack. You switch your heroes’ mode of attack at will. So you can move from Bravery Attacks to Finishers, or from Flee to Defend, etc. Special moves, summons and assists must still be manually executed. This mode of play is designed for players who do not have much experience with action based fighting games.

All in all, this game is basically Dissidia Final Fantasy version 2.0. If you’re curious about these titles but you have to choose one of the two, Dissidia 012 is a no brainer. The biggest issue you will face is that this is a very multiplayer focused title and it’s age means it will difficult to find others still interested in playing. This is a problem that is only going to compound with the release of Dissidia NT. Thankfully, the single player mode will always be there for those who want to experience the actual story itself. 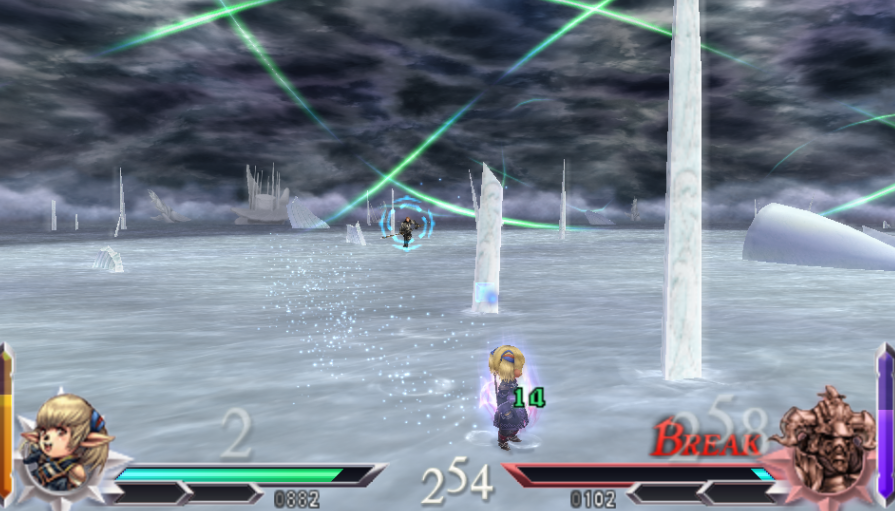 Difficulty: Variable –  Just like with Dissidia Final Fantasy, the story mode difficulty will vary depending on your actions. As you play through the story you can make choices that render your journey either easier or harder. Enemies do get more difficult as the game progresses, but you can always grind and level up to make things a bit easier. Optional battles are more difficult, but can be avoided. Of course, when playing multiplayer against other gamers, the difficultly is will vary.

Originality: A large portion of what is found in this game is an exact clone of the previous Dissidia. However, new features and refinements make this game an acceptable revamp.

Soundtrack: Again, one of the high points of the game. Dissidia 012 brings back a number of classic Final Fantasy scores and renders them in new and fresh arrangements. The voice acting is spot-on and very well done.

Fun: Fans of brawlers will find a lot to enjoy here. This time, even RPG fans have something to look forward too. The best time will be had by those with friends who can engage in the multiplayer aspects of the game.

Graphics: Dissidia 012 is an amazingly rendered game. Perhaps one of the best titles graphically on the PSP.


Playcontrol:  I’m happy to announce that some headway was made between this and the first Dissidia game. The camera is not nearly as annoying and the controls offer more customization.

Downloadable Content:  This title offers vanity costumes for playable characters and add-on soundtrack packs for sale via PSN.  There’s also a free “Demo” that actually serves as a prequel to the events in the game.


Value:  Finding a physical copy of this game may be difficult and pricing on physical copies can vary. The game is available for purchase digitally on PSN for $10. For the amount of content in the title, this price is worth it.

Overall score (1-100): 90 – This is the game that the first Dissidia title should have been. It’s the perfect mix between a fighting game and an RPG. The storyline is improved, the visuals and soundtrack are superb. The nagging play control issues that plagued the first game are nearly non-existent. If you’re a fan of Final Fantasy and you also enjoy brawler style games, this one is worth is a look.

Available today on: Currently unavailable   – (Updated as of Spring 2022)