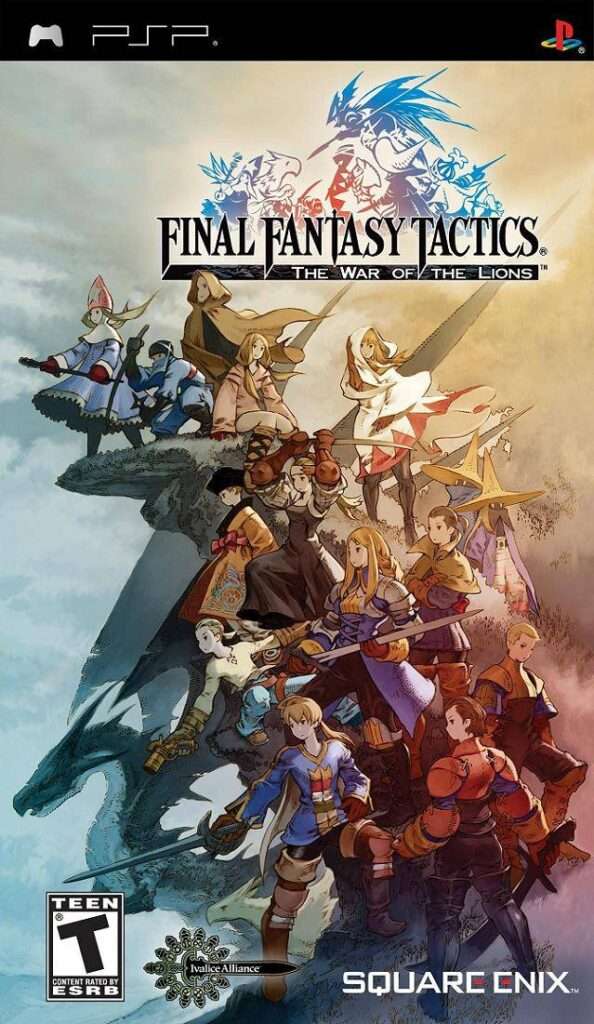 This is a review that has been a long time coming. Occasionally, I get emails or twitter messages asking me to review or discuss a particular game. Of all the messages I get, by far the most requested retro review is for Final Fantasy Tactics. As a lifelong fan of the Final Fantasy series, I’m ashamed to admit that Tactics is a game that I’ve actually never set aside the time to play. First of all, it came out during a time in my life when my mind was on things other than gaming. Also, it’s a not a traditional RPG like most other Final Fantasy titles. Instead, it is a more of a tactical/strategy game with lots of RPG influence. In case you’re not aware – I generally do not enjoy tactical style games. In my opinion, most games of this type tend to progress just a little too slowly for my tastes. With this in mind, I think I’ve always been hesitant to dive into Final Fantasy Tactics. But, that time is over.

Before we get into the details, I want to start by mentioning that there are two versions of the game. The original release is simply known as Final Fantasy Tactics. It was released on the Sony Playstation in 1998 and is also currently available for purchase on the Playstation Network for PS3 and PSP users. The game was later re-released in 2007 for the Playstation Portable under the name Final Fantasy Tactics: The War of the Lions. This is considered to be the definitive version of the game. It includes graphical enhancements, new cutscenes, an improved translation, a more balanced difficulty, as well as the inclusion of two new playable jobs (more on that later). This remake is also available on both iOS and Android devices. For the sake of this review, I played the PSP version of War of the Lions.

The story of the game is absolutely magical. It’s even been compared to the works Shakespeare by some. Yes. It’s that good. The game takes place during an age when the world is recovering from the aftermath of a 50-year war. The story focuses on a young knight-errant named Ramza, an unsung hero of history. Despite being a sellsword, Ramza is from a noble bloodline. Ivalice is a world where heritage and caste is held in the highest regard.  As the game progresses, Ramza comes to learn of a nefarious plot by the Church in which his family serves. As a result, he must choose between honoring his family or placing his trust in an old friend. Of course, the actual plot is much more intricate than can be summarized into a simple paragraph. In fact, I daresay it might be the most well written storyline in the entire Final Fantasy series.

Despite having similar themes and a rich story, Final Fantasy Tactics is very different from other games in the main series. Instead of being an open-world game with short turn-based combat, the game is essentially a series of RTS overhead battles. During combat, the player controls a team of various units (characters) on a grid-like battlefield. You move your units into position, then execute attacks or abilities. Once you’ve defeated all of the enemies on the grid, the battle is over. Generally speaking, the story scenes take place between battles and advance the plot. 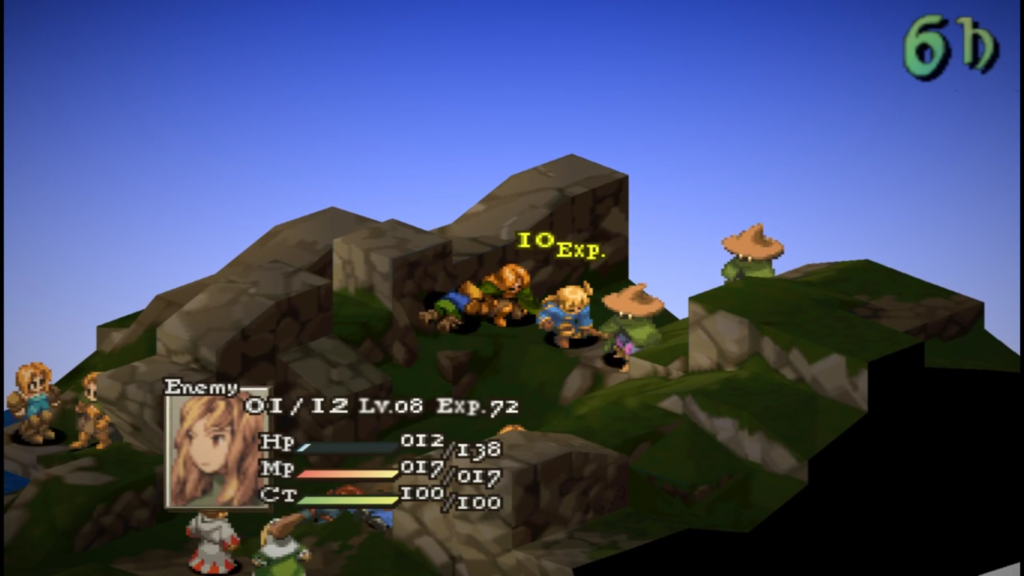 Units earns experience and job points during battle. As you might expect, experience points level your units up. Job points are used to unlock new job-specific skills for your units. Each unit can be equipped with weapons and equipment and even abilities, many of which are earned by leveling various jobs. At the beginning of the game, only a handful of jobs are available. However, new and more advanced jobs will soon become obtainable as your characters continue to level and grow.

The job system found in Final Fantasy Tactics is similar to what was seen in Final Fantasy III and V. However, the representation in Tactics is widely considered to be the best implementation of the system thus far. Many of the jobs introduced in this game have since been seen in other titles in the series, namely Final Fantasy XI and XIV. Mastery of the Job System is really the key to success in the game. On it’s surface, Final Fantasy Tactics appears to be brutally difficult. In fact, the first few battles players will encounter can often be some of the hardest and most punishing. But, if you’re willing to spend the time to understand the game’s mechanics, it’s quite possible to exploit the job system to your advantage. In this way, the game can actually become ridiculously unbalanced and easy. Certain job and equipment combinations can essentially render your party nearly invulnerable.

Even though the game suffers from balance issues, it’s hard to claim that FFT is anything short of an absolute masterpiece. That being said, I  have to admit that it is not a game that I could really get into. It’s not that it’s a bad game, it’s just not the type of game that I personally find enjoyable. I am just not a strategy/tactical game fan. While I loved the story and the mechanics of the game, the combat was just too slow-paced and lengthy for me. In most Final Fantasy titles, combat is resolved relatively quickly – with the exception of boss battles. But in FFT, most battles take anywhere from 10-15 minutes on average. You can to watch each unit move into place in real time. Then you face them a certain direction, then execute an action, etc. Then, if you mess up and lose a character you will likely want to reload your save and try again. And there are A LOT of battles in the game, even more so if you intend to grind out levels and job points. My other complaint has to do with the grid-based battle system. I found having to rotate the 3D grid just to get a good vantage point to be overly cumbersome. But that’s a flaw that’s easy enough to ignore on it’s own. I just don’t care for this type of game.  It’s not the game…. it’s me. I can admit that. For those that love tactical games like this, FFT is by far the crown jewel.

Even with my dislike for this type of game, the storyline was addictive. I felt compelled to play the game to completion and I’m glad I did.  It’s truly a memorable experience. For me, small quality of life changes such as having an option to speed through some battle animations, and slight playcontrol enhancements would likely change my mind. 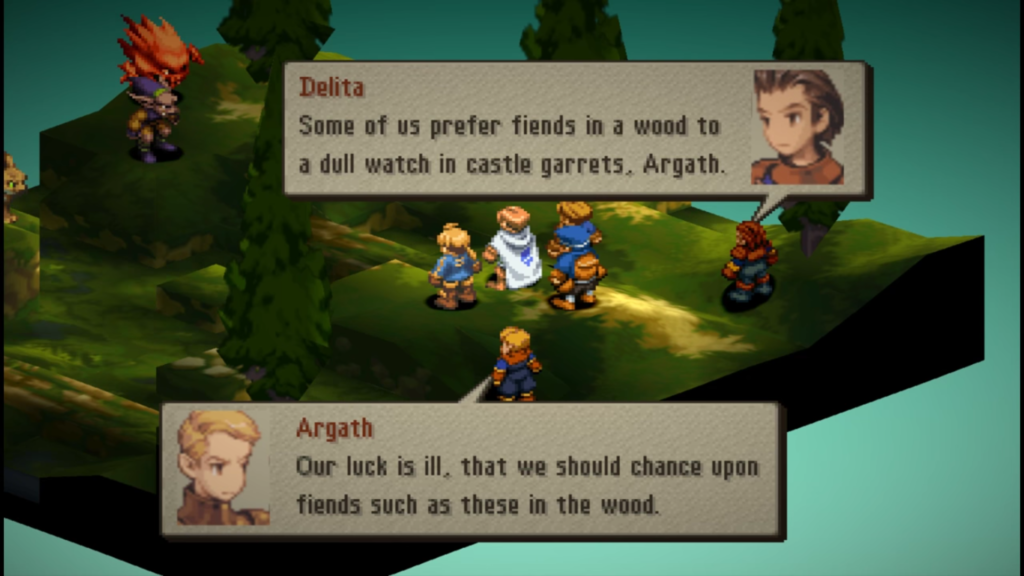 Difficulty: Mixed –  On the surface, FFT is a brutally difficult game. However, as I mentioned in the main review above, players willing to really dive into the deep mechanics of the job system, and do a little grinding will be able to make the game a complete piece of cake. It just takes a little dedication. Players who intend to play the game “normally”, will find quite a challenge ahead of them.

Story: The storyline is the main selling point of the game for me. It’s truly a work of art. If you’re playing for the storyline, I do recommend the War of the Lions version of the game. The new translation is exceptional, whereas the original localization does leave a lot to be desired. Plus, the cutscenes are extremely well done.

Originality: In terms of other games in the Final Fantasy series at the time of it’s release, FFT was very original. However, it was certainly not the first tactical role playing game. But, by combing a rich story, a unique job system, and other Final Fantasy elements, we are left we a completely original title that is unlike any other.

Soundtrack: The score for the game is also exceptional. It’s fully orchestrated and absolutely stunning. Since experiencing this game, I’ve also purchased an official copy of the soundtrack and added it to my collection.

Fun: If real time strategy or tactical combat games are your cup of tea, this game will undoubtedly be a favorite of yours. Fans who are more RPG oriented, like me, may find this game a little sluggish and a bit of an ill fit. That being said, the game can still be very enjoyable. It’s just not a one-size-fits-all experience.

Graphics: Regardless of which version you play, Final Fantasy Tactics shows it’s age. I do recommend the updated version for the best graphical experience. The cutscenes are hand-drawn animation and absolutely stunning.


Playcontrol:  This is my biggest area of complaint. While the functional controls for the game are of no issue, the camera controls and battlefield screen rotation are annoying. Also, since many of the sprites look alike, it’s easy in the beginning of the title to tell the difference between friends and enemies without actually hovering over individual units. Ironically, the best play control experience comes not on PS1 or PSP, but rather the mobile port of the game. The mobile version actually seems to alleviate many of these playcontrol headaches.


Value:  Both the original and remake are available on the Playstation Network for $9.99. So if you have a PSP or a Vita, the War of the Lions version is a no brainer. The price is more than fair for the amount of gameplay in the title. Prices vary for mobile users, but I’ve seen the game as low as $4.99 on the Google Play store.

Overall score (1-100): 85 – I know that many gamers would crucify me for giving this game anything less than a perfect score. But to me, I had just enough complaints to knock this down a few pegs. The storyline and soundtrack are second to none. But some of the gameplay elements and camera issues just really bothered me. I will say that Final Fantasy Tactics, in any form, is a stellar game. But it’s not a game that I can recommend to all players. If RTS or tactical RPGs are your thing, this will certainly be one of the best titles you might ever play. If you’re like me, you may not find this to be as enjoyable.