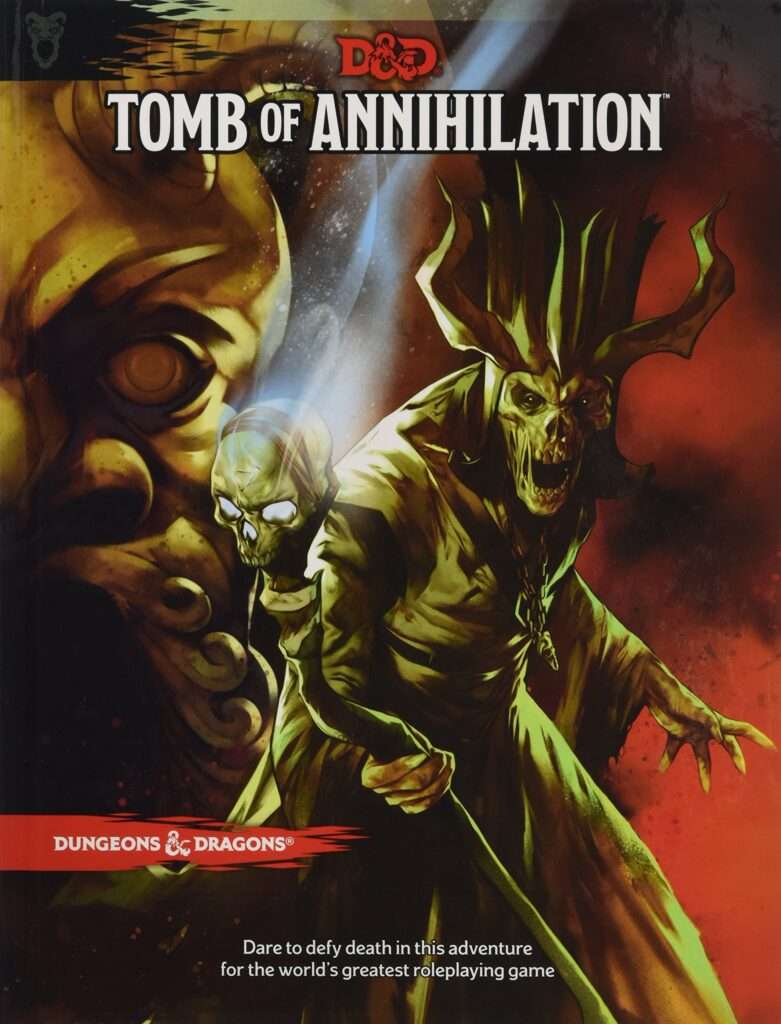 Finally! We are up the most recent D&D adventure for 5th Edition. In fact, at the time of this writing, this is the adventure that is currently being run in official game sessions. Of course, I’m talking about Tomb of Annihilation.

Tomb of Annihilation is an adventure set in the world of Forgotten Realms. It takes place in tropical region of Chult. This is an area that could be best be compared to the jungles of South America. Chult is also popular as a location populated with Dinosaurs! Yes, we finally have some official dinosaur action in fifth edition D&D. The adventure is designed for players of level 1 and will take them to level 11 or even higher.

The storyline to this adventure is an interesting one and it actually ties-in to the classic D&D adventure Tomb of Horrors (which can be found in the 5E book, Tales from the Yawning Portal). The focus of this adventure revolves around something called The Death Curse. This mysterious event is causing anyone who has been raised from the dead by magical means to begin rotting away into nothing. The source of this curse has been identified as coming from a strange tomb hidden in the depths of the jungle. Players must brave this deadly dungeon and eliminate the cause of the curse.

This seems to be a very well put together adventure. The book contains more than enough information and resources to give the DM everything he needs to referee the game. There’s also plenty of content here. This will not be a short adventure at all. So expect this to provide weeks or even months of entertainment. The biggest challenge to this adventure seems to be the sheer difficulty level of the dungeon itself. This is certainly not a storyline to present to rookie players. It’s also not one that should be attempted by an inexperienced DM. The traps and encounters in this book are downright brutal and punishing. This is made more so due to the fact that the Death Curse prevents any normal means of resurrection. It’s also worthy of mentioning that this book also contains two new background options for players. But this alone does not make it a worthy purchase for players, in my opinion.

I’m looking forward to diving into this book once I have managed to get my DM skills up to snuff. But I don’t expect that to be any time soon. Regardless, Tomb of Annihilation appears to make a fine addition to the growing selection of adventures for 5E.