It’s Valentine’s Day! And I’ve decided to start a new tradition on this blog. A few years back, I posted a Valentine’s Day review of a flirty little game called Hunie Pop. I did this as sort of a one-off joke. But due to the recent upswing in indie H-games on Steam and the fact that all of my friends insist on gifting me with embarrassing purchases just so they can point to my game library and laugh, I’ve decided to embrace it and review these ridiculous games on Valentine’s day.

When it comes to “questionable” games, I really didn’t know where to start. As mentioned above, I already reviewed Hunie Pop. Which, despite it’s lewd nature, actually featured some pretty solid gameplay. Then back in the summer of last year, I shared a review of the dumpster fire that is Dragonia. Yeah… Let’s not even talk about that. I didn’t think I’d ever be able to top Dragonia. So for this review, I decided to go with a game that had the most absurd title possible. I wanted to find something both descriptive and cringeworthy. Well, I didn’t have to look hard. As soon as I saw the name “Deep Space Waifu“, I knew this would be the game for 2018.

Deep Space Waifu is technically a schmup. Some might even call it a bullet-hell style game. But, I’m not sure it quite fits that description. The gameplay will certainly be familiar to fans of the genre. But it includes the added mechanic of having to also destroy certain “environmental” features along with just enemies. (And by environmental features I mean, blasting the clothes off of crudely drawn anime girls). 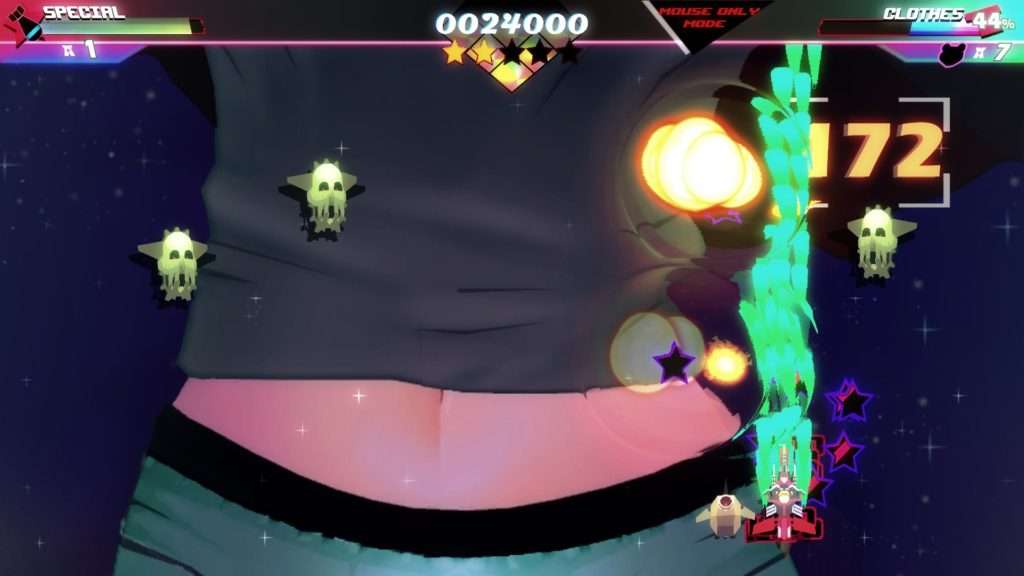 You see, in this game, you play a character known as “King Bear”. King Bear hooks up with random girls that he meets on Space Tinder. He then takes that girl on a date. The goal of the game is to have as successful of a date as possible. But every date is sabotaged by random aliens. Completing a date means that you have to blast aliens from the back of your flying motorcycle until a Boss shows up, then you blow the Boss to smithereens. The success level of your date is determined by the percentage of “environmental damage” you have done… Upon completing a date with a rating of 100%, you then unlock what is essentially Easy Mode for that level… (you’ll see what I mean if you play).  As you progress through the stages, you will unlock new special weapons and attacks.  It’s really quite simple.

When this game was first released, it was pretty rough. The artwork was cheap looking, and the controls were pretty wonky. However, the title has received numerous updates since it debuted on Steam. Each of them improving nearly every aspect of the game. At this point, it’s actually a very polished product. The game can be played using either a keyboard, mouse-only or with a controller. But, having tried all three, I highly recommend the mouse-only mode. There’s really no reason to try anything else. Being a mature title, the Steam version of the game is censored. But the developer has released a patch that restores the game to its original form for users who are ambitious enough to go looking for it.

The main game is pretty short and can easily be completed in under an hour. At the time of this writing, there are two forms of DLC for the game. The first is called the Academy Expansion. This bit of DLC adds some additional dates with sports-themed girls to the main game. There’s also a standalone expansion (basically a separate game) called Flat Justice. Add them all together, and you end up with a decent sized game. 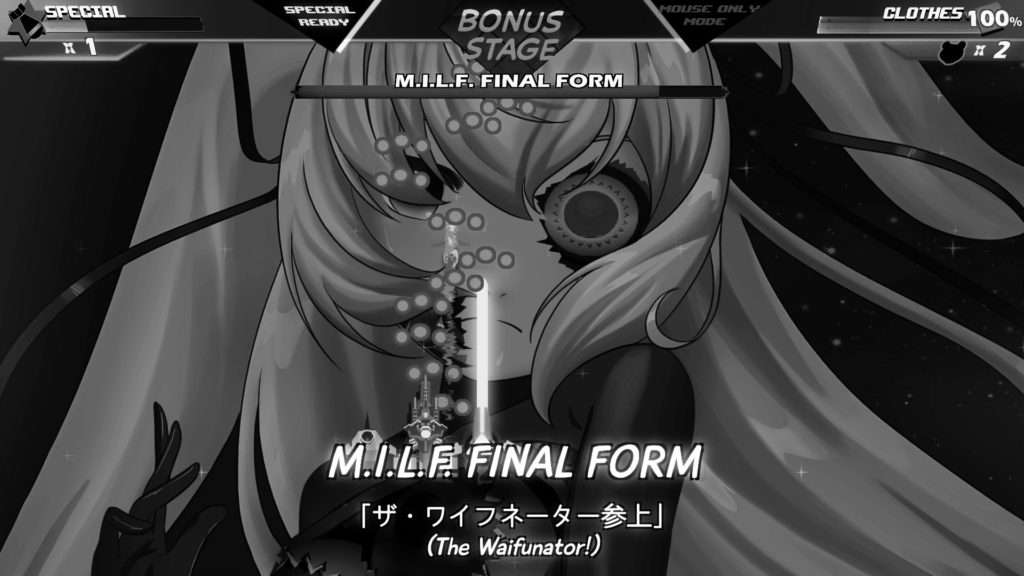 The Flat Justice expansion is actually more like a sequel than a piece of downloadable content. In this version, we learn that King Bear is actually a cop. He is tasked with rooting out corruption in the police force. To do so, he must go undercover and date several suspects from among his own unit until he finds the mole that is working with the enemy.  This version of the game actually attempts to craft some form of a plotline by adding cutscenes in between levels and tacking on insanely inappropriate names and art designs for end bosses.

To say that this is a niche-game is an understatement. On it’s surface it seems only to appeal to lonely weeabos. But fans of shoot-em ups may actually get a bit a fun out of it too. I certainly received way more entertainment from this game than I expected to. The gameplay is very well done, the graphics are colorful, and the humor is over-the-top. This is a game that doesn’t take itself very seriously. The whole thing is really one big joke. It’s a bit like renting a really bad horror movie – It’s terrible but in a good way.

So, if you ARE a lonely otaku looking for your waifu… perhaps you should consider one of the deep space variety. 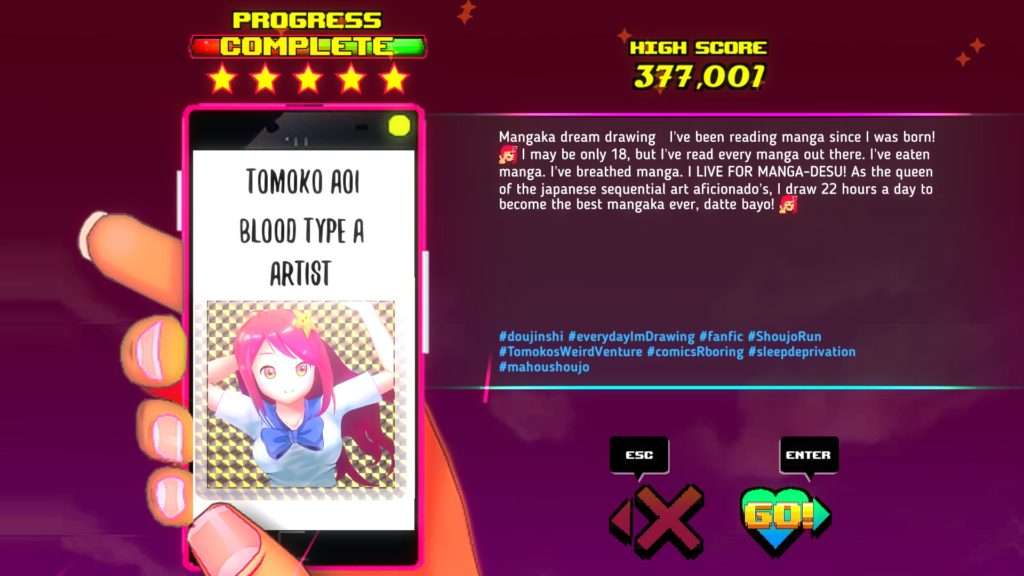 Difficulty: Easy –  Even though this could be considered a “bullet-hell” game. It is EXTREMELY casual. It is very possible for most players to fly through this game and it’s expansions with relative ease. The difficulty does increase a bit as your progress through the different levels. But not by much. The real challenge lies in playing the game in “Gentlemen Mode”. With this option enabled, you want to avoid to any environmental damage at all… but even with this added challenge, the game is still pretty simplistic.

Story: Yeah… you’re a space bear trying to hook up with space chicks. Then, suddenly you’re a cop doing the same thing in the name of justice… If a thought provoking plotline is what you’re looking for, you won’t find it in a game called Deep Space Waifu.

Originality: This is a tough call. While overhead schumps have been done to death, this game adds a pervy twist with a retro/anime feel. It’s an odd combination that somehow manages to keep this game feeling like something you’ve never seen before.

Soundtrack: High praises here! The soundtrack is arguably the best thing about this game. This is especially true for the Flat Justice expansion. Nearly the entire game features music by an artist called Funny Death. This is a musical artist I had never heard of until I played this game. But I have since purchased their entire discography. The music is best described as retro/synth-pop with a bit of a foreign flair. It’s absolutely phenomenal and it fits in well with this quirky game.

Fun: As much as I hate to admit this, Deep Space Waifu is a fun game. It’s not because of the risque art, but the game itself is just downright entertaining. And the silly aspect of the whole thing only adds to the level of enjoyment.

Graphics: When this game first hit the scene, it looked pretty bad, to be honest. But it has since received an overhaul and it’s actually a good looking title these days. Much of the art work is hand-drawn, the rest are rendered in a retro-style that sparks nostalgia and overall good vibes.


Playcontrol: As mentioned in the above review, Mouse-only mode is the way to go. Playing this game with a controller is probably your second best option. But on more than one occasion, I’ve found some issues with responsiveness when using that method. Playing with a keyboard is possible, but not recommended.

Downloadable Content: This game currently features two add-ons. One is a proper expansion, the second is a stand-alone title.

Mature Content: This is a game that focuses on adult situations and inappropriate humor. Enemy names are puns for various body parts, etc. Even though the Steam version of the game is censored, it is still at it’s core pornographic in nature. This is not one for children.


Value:  The main game and the Flat Justice expansion are $2.00 each. The Academy DLC is sold for $0.69. So, you can obtain the entire collection for under $3.00. That is simply a steal. The game is also often found on sale for even cheaper than that.

Overall score (1-100): 75 – Deep Space Waifu is a playable joke. It’s not meant to be taken seriously at all. With that in mind and considering the price point, I have to admit that most players will get a good amount of entertainment from this title. However, the adult nature of the game will limit its audience. This is a bit of a shame, as the game itself does have some really good qualities.