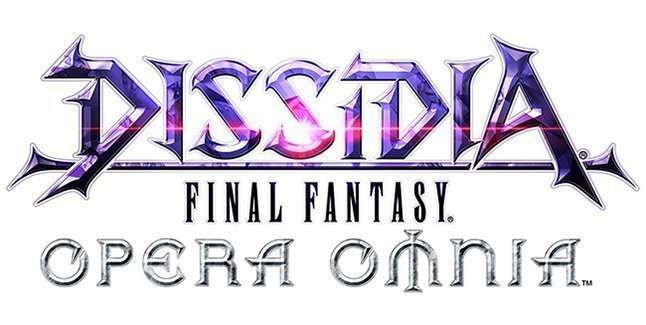 Fresh on the heels of my Dissidia NT review, I’m going to take a moment to discuss the mobile spin-off; Dissidia Final Fantasy Opera Omnia.  Wow! What a mouthful! This is a free-to-play mobile game that is available on iPhone and Android devices. It features more traditional RPG combat, but also incorporates certain elements found in Dissidia. The end result is a unique mobile gaming experience.

This mobile game was released to coincide with the Dissidia NT launch. In fact, players who purchase a copy of NT at release, will receive a special code that unlocks a starter pack in Opera Omnia. (Normally available for purchase with real money). These two games very much compliment each other. Dissidia NT is action and battle focused, while Opera Omnia helps to round out the storyline and features a much more laid-back battle system.

The basic premise of this game is to participate in a number of battles using a roster of characters from across the Final Fantasy franchise. Characters can earn experience and level up. You can equip various arms and armor on your characters. This equipment is earned through a “gacha” style draw system. The game also features special events, daily quests, and rewards. In-game currency can be earned by playing through the contents of the game or can also be purchased for real money. Pretty standard fare. 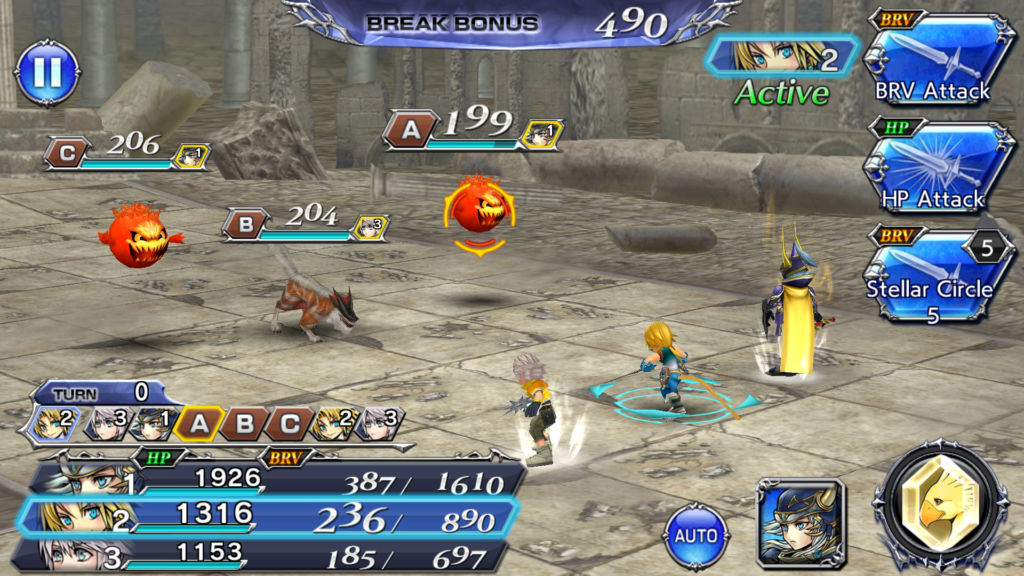 The main plot of the game is simple. Heroes from different Final Fantasy games are brought together to help defeat monsters. The roster of playable characters is pretty impressive. All of the usual elements for mobile RPGs will be found in this title.  To be completely honest, there’s little aside from the Final Fantasy theme to set this game apart from a multitude of others out there. But, fans of the series are not likely to care. The gameplay is well done and the script is entertaining. When looking at the big picture, there’s little to complain about.

The basic version of the game is pretty accessible regardless of the player’s skill level. In fact, the game even offers an automatic battle option. So it can literally play itself. However, if you want to max out the rewards that you receive at the end of each battle, you will need to play manually. Once you’ve cleared a chapter, you also unlock a “hard mode” of that area. Hard mode is no cake walk. This is where the game’s real challenge comes into fruition. 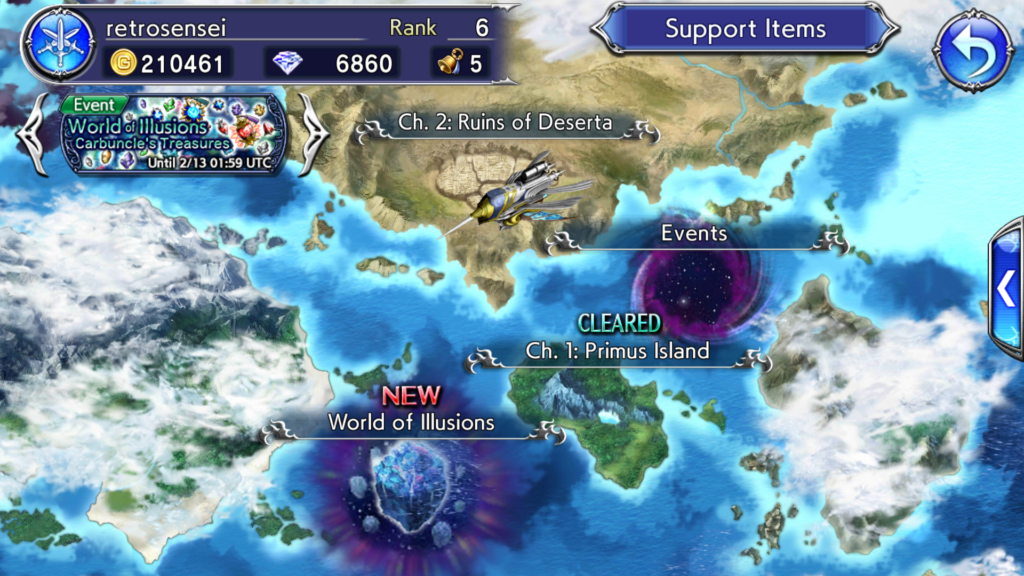 These days, the mobile gaming market is pretty stable. Free to Play titles that are supported by microtransactions are fairly commonplace. In this regard, Opera Omnia is a pretty standard operation. The game itself is free and receives frequent content updates that are also free of charge. The option also exists for players to spend real money on virtual currency that can enhance their characters and expand storage. The trick to enjoying games like this without breaking the bank is patience. Games of this type always offers freebies and bonuses from time to time. Opera Omnia actually feels to be very unoffensive in this regard. Many mobile games are designed to be exploitative. Very often, games like these eventually reach a point where the player feels compelled to spend real money in order to progress. So far, I’ve not encountered this type of issue with Opera Ominia.

My biggest complaint is that in order to back up your game data, you are required to link a Facebook account. Other mobile Final Fantasy games also have this requirement. As someone who no longer keeps a personal Facebook profile, I find this to be annoying. Other games have successfully used alternate methods of backup that work just fine. King’s Knight is a prime example of data backup done right.

All in all, Dissidia Opera Omnia is a welcome addition to the lineup of mobile Final Fantasy titles. It’s simple to grasp and offers a fun way to kill some time. It’s not as engrossing and does not require as much commitment as some mobile titles. But, that’s ok. Sometimes you just need a little something to kill a few minutes of downtime. Opera Omnia provides just that. 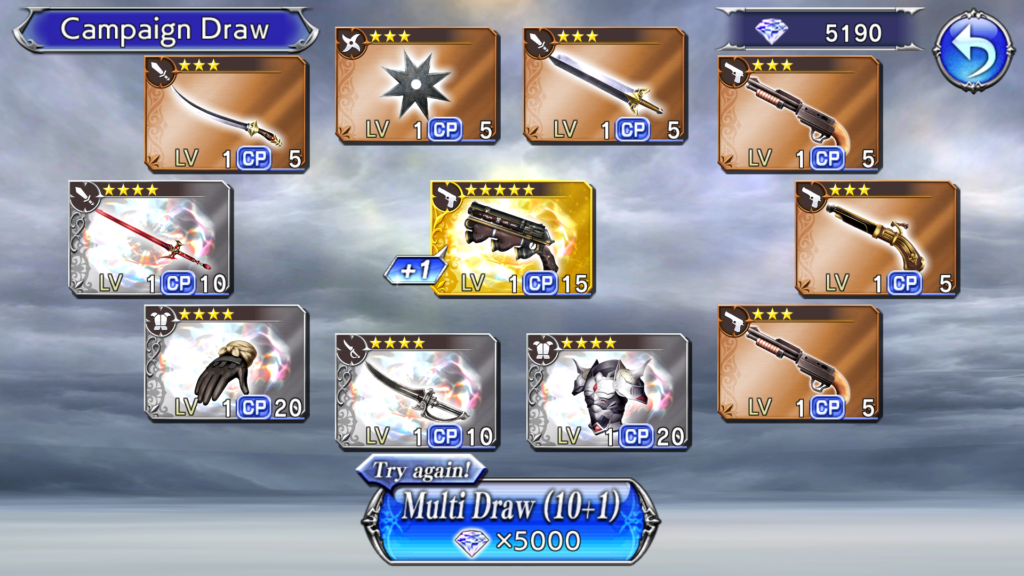 Difficulty: Easy –  The base game and storyline quests do not provide much of a challenge. Special events and hard mode areas, however, are pretty tough. Overall, this makes the game feel appropriately balanced.

Story: Opera Omnia provides the story that Dissidia NT neglected. We get to see how our heroes initially came together and there’s lots of fun dialog to boot.

Originality: This game follows a fairly standard mobile model. In large part, it’s nothing that we haven’t seen before. But, the incorporation of the Dissidia battle model does give this game a bit a of a unique feel.

Soundtrack: The music in this title is phenomenal. It features a number of classic Final Fantasy scores, including music from the Dissidia sub-series. Well done and enjoyable.

Fun: I enjoy this game for what it is; a simple, entertaining way to kill time. In my opinion, this is what mobile games should aim for. There’s plenty of content without a huge time investment.

Graphics: This game takes a cartoonish approach to it’s graphical rendering. But, it’s well done and beautiful.  It’s looks good on both smaller smartphones and “phablets”.


Playcontrol: No real issues here. This is a simple tap-based interface. Purchases require confirmation, so there’s no concern about accidentally spending real money due to fat fingers.

Overall score (1-100): 80 – A story-heavy gacha game for mobile devices. This title doesn’t seem to rely on cash-transactions as heavily as others. Fans of the old PSP Dissidia titles who are turned off by the fast-paced combat in Dissidia NT, may find what they are looking for in this little game. That aside, there’s very little that sets this apart from other similar titles.