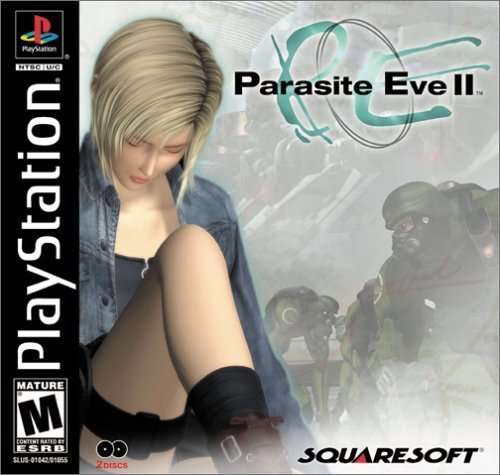 It took longer than expected, but my review for Parasite Eve II is finally here! Two years after the release of the original game, Square followed up with the second entry in the series.  I really enjoyed the first Parasite Eve game and I was very excited to experience the next chapter.

This game picks up three years after the events of the original. After what is now known as the “New York Incident”, Aya was recruited into a secret unit of the FBI called M.I.S.T. Her job is to hunt down and eliminate any remaining Neo-Mitochondria Creatures (NMCs).  The game begins when she is deployed to Los Angeles to help put down a sudden burst of NMC activity. While completing her mission she has an encounter with what appears to be a humanoid NMC. The creature escapes but Aya is persistent in learning more about this unusual being.

Her next assignment brings her to a rural town in the middle of the Mojave desert. The area is infested with NMCs and Aya investigates a lead hinting at their point of origin. It is during this investigation that she unravels a shocking conspiracy. One in which she has unknowingly been a participant in. 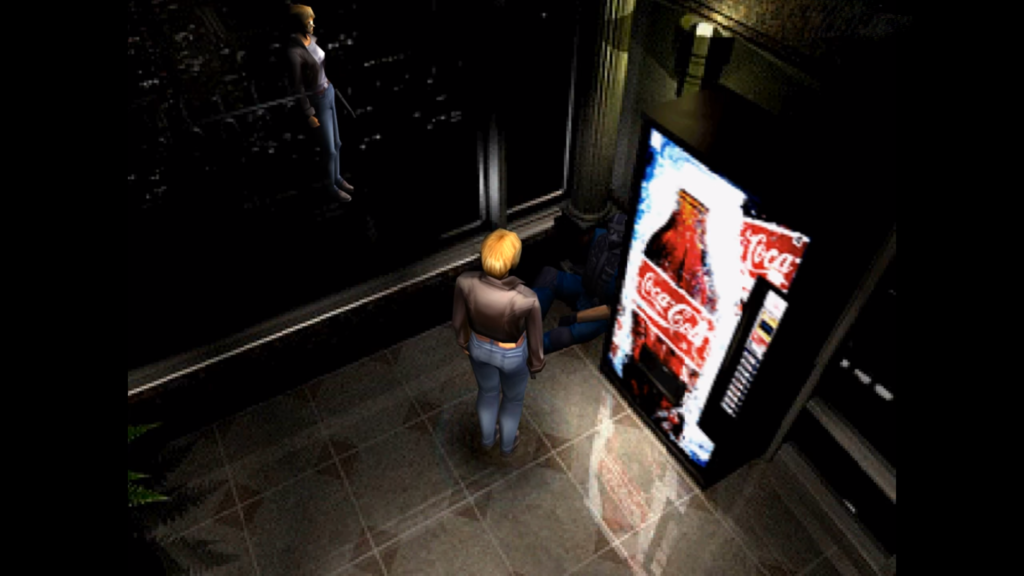 While the storyline builds off of the original game, the actual gameplay is considerably different. The first Parasite Eve was an interesting mix of RPG and survival horror action. This time around, nearly all RPG elements have been stripped away. This leaves the game as strictly an action-based survival horror title. In fact, it looks and feels very much like a Resident Evil game. Parasite Eve II has even adapted the familiar and irritating “tank-style” playcontrol scheme, as well as other aspects that have become synonymous with the Resident Evil franchise.

To be honest, the changes from the original game are a mixed bag. The combat no longer relies on meters and timers and it’s not locked into a specified battle area. This allows for much more freedom during combat. Aya is able to run around unfettered and even change zones while engaging an enemy. This is a good thing. Sadly, the movement controls really make navigating problematic during combat, especially early on in the game. Thankfully, Parasite Eve II has a targeting system that does a lot to help with the pain-point caused the crummy playcontrol.

Aya also does not level up in the traditional sense. Combat still yields EXP. However, EXP in this game is reserved for strengthening and unlocking her Parasite Abilities. Aide from experience, Aya also earns Bounty Points with each monster she eliminates. These points can be exchanged for weapons and items. So it’s beneficial to take out any NMCs that you encounter, even if fleeing is an option. 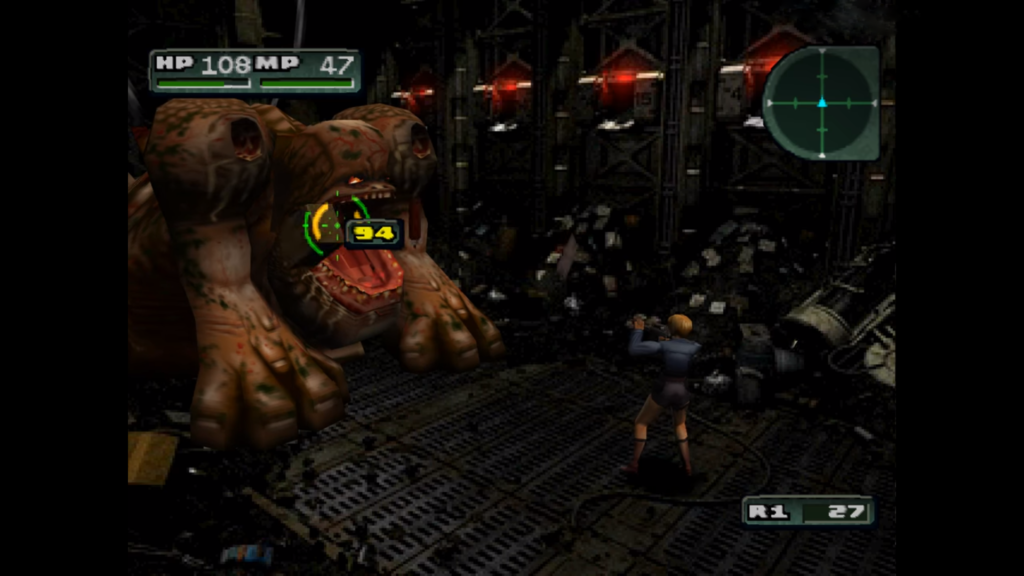 Despite taking a step back in the areas of playcontrol and originality, Parasite Eve II offers some very stunning visuals. The backgrounds are prerendered, yes. But the sprites in the game itself and the cinematic sequences are very well done. This game provides the best of the what original Playstation could offer.

So, praise and gripes aside – how does it play? Parasite Eve II is solid and has hours of content. I personally found the middle section of the game to be a bit repetitive and at times, boring. But the action picks up again towards the end. As a survival horror, the game excels. The atmosphere is there and it is very well done. I just wish it would have kept more of the unique elements from the first game, instead of of settling in to what has now become a cookie-cutter format.

The game does feature multiple endings depending on certain choices made during your playthrough. Getting the best ending on your first time through is unlikely unless you have a guide. Thankfully, you can replay the game over upon completion. So it’s very possible to enjoy everything the game has offer even if you missed it the first time around. 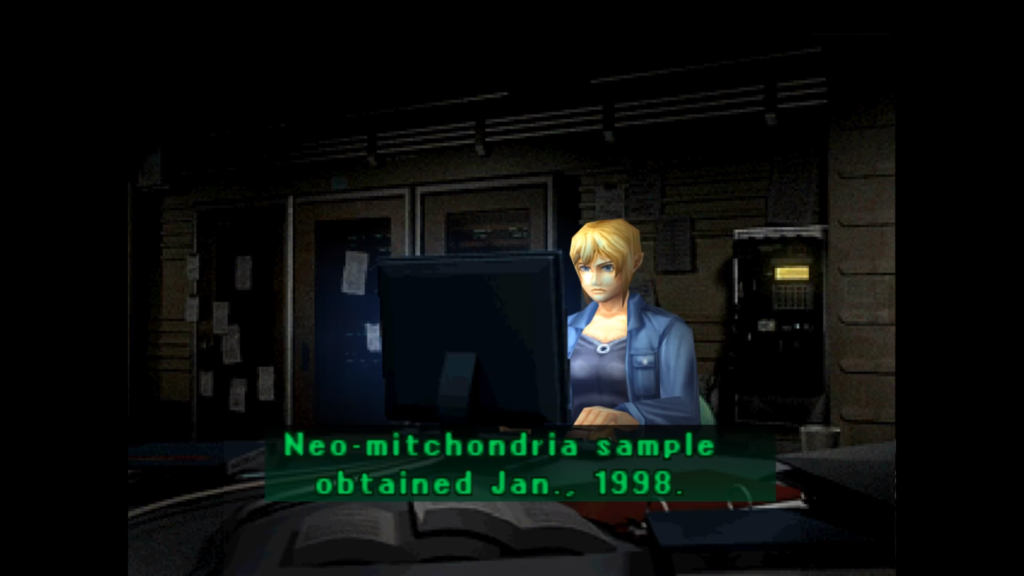 Difficulty: Variable –  Parasite Eve II offers a single difficulty level for first time players. The biggest challenges here are not found in tough boss mechanics or random encounters. But rather, I found the toughest aspect of the game to be the mastery of the game controls (ie: working through the stiff and stubborn playcontrol). After an hour of two of playtime, you tend to get the feel for things and the game gets a lot easier. Once you’ve completed the game the first time, you do unlock two additional modes of play. Replay Mode (an easier, New Game + style experience) and Bounty Mode (this is essentially Hard Mode). Finally, after reaching a certain rank in either Replay or Bounty mode, you can unlock Scavenger Mode. This ratchets up the difficulty by another notch. But wait… there’s more! Completing the game on Scavenger Mode presents you with a final option: Nightmare Mode. This is mode of play is similar to Bounty Mode, but much more brutal.

Story: This game takes the fundamental story provided by Parasite Eve and gives it an X-Files/Conspiracy twist. This is not necessarily a bad thing, per se. But, I feel like by doing so it really takes some of the more unique lore elements away from the game. All that aside, the in-game story is well done and captivating even if it loses some of itself.

Originality: This game really took a huge step backwards when it comes to being unique and original. It seems that Square panicked at some of the minor criticism they received from PE1 battle system and just decided to scrap it and follow the Resident Evil formula in hopes that no-one noticed. Everything that made the first game unique has been watered down. This is true for both the storyline and the gameplay itself.

Soundtrack: The game scores high here. The music is atmospherics and catchy. The game soundtrack is an excellent companion to the adventure. It is comprised of everything from lo-fi jazz to industrial. It helps build tension and excitement. It is everything you’d want from a survival horror score.

Fun: Despite a number of complaints, this actually a very entertaining game. Fans of the survival horror genre will find a lot to like. The replayability of the title means there are many potential long nights filled spooky fun. The storyline, even if it is not original, hooks you. The characters are soulful and engaging. I had a great time exploring the depths of this game.

Graphics: Like many PS1 titles, this game shows it’s age. However, it stands up better than most Playstation titles from the same era. The prerendered backgrounds are well done and the character sprites were top of the line for their day. The cinematics are as good as they get and are a pleasure to watch.


Playcontrol: No no no. This is the my biggest issue with the game. The playcontrol in this title is several steps down from the original Parasite Eve. It follows the familiar but frustrating scheme found in other survival horror games of the day. Turn-and-walk style controls are the bane of my existence when it comes to action games. Thankfully, we do have a targeting system that helps ease the pain. Without it, this game would be a nightmare to control.


Value:  Despite a number of complaints, this game can still be very much worth your time. It is available digitally on the Playstation Network for $5.99. Physical copies can be found on eBay for $10 or less usually. Considering the vast amount of content and replayability, it is well worth that price even with all of its faults.

Overall score (1-100): 75 – This is a tough one, because despite its flaws, Parasite Eve II is still a really good game. I enjoyed it immensely. But, when stacked up against its own prequel and other games of a similar nature, it just doesn’t have what it takes to stand out. If you are fan of the original Parasite Eve or if you’re a hardcore survival horror nut, then this game is definitely worth your time. If not, it might be a little hard to recommend this one.

Available today on:  Currently Unavailable   – (Updated as of Spring 2022)