As many readers of this site will know, I’m a huge fan of fantasy role playing games. Both traditional pen and paper games and video games. When it comes to video game RPGs, my first taste of the genre came in the form of Wizardry, an old school PC game. From there, I moved on to Ultima and eventually to Final Fantasy. For many years, these three franchises continued to flourish and I would hop from one game to the other. Eventually, the Wizardry series fizzled into obscurity and the makers of Ultima had turned their attention to Online gaming. My initial experience with Ultima Online was not that promising, so for me, Ultima was now dead in the water. I enjoyed Final Fantasy, but I knew deep down in my soul that I wanted a gaming experience that captured that classic medieval Dungeons & Dragons genre of fantasy that I had originally found with Wizardry. Just when I thought all hope was lost, some friends of mine introduced me to a game called Everquest.

It was early 2000 and Everquest was the hottest online game in existence. It was not the first true MMO, that honor probably goes to Ultima Online  (or some would argue, Tibia). But, it was the first true 3D massive multiplayer online roleplaying game. I had several friends who had been raving about the game since it was initially announced. Then, upon its release in 1999, several of the them took whole weeks off of work just to dive in and play this new game. At that time in my life, gaming had been downgraded to a casual way to pass time. It was not a full time hobby of mine. So, for almost a year I avoided the Everquest craze. Then finally, a friend of mine showed up on my doorstep with a copy of Everquest: The Ruins of Kunark. The box contained both the original game as well as the new Ruins of Kunark Expansion. I was given the game as a gift on the condition that I would play with him and his friends for one month.

At first, I was completely enchanted with the game. The graphics reminded me of some of the later titles in the Wizardry series, only better. The music was delightful and awe-inspiring. The game even had an atmosphere that matched exactly what I was looking for. My only initial complaint was with the complexity of the user interface. I had spent a little time with Ultima Online, so the vast array of menus and options were not new to me, but Everquest had more windows and widgets than anything I had encountered thus far. 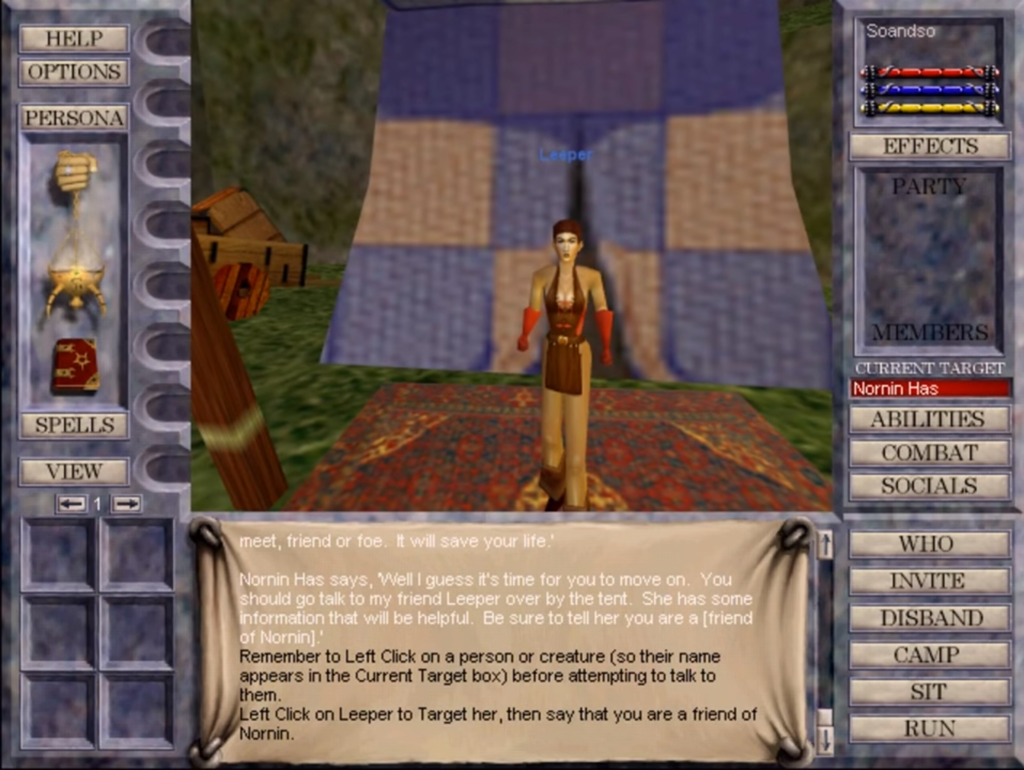 I remember enjoying my first few days in the land of Norrath. I was captivated by it. The world was large and full of mystery. Absent was the hand-holding that is often found in modern games. You were thrown right into a living, breathing world that was populated with other players. Your only guide was an instruction manual included in the box (which offered little more than basic instructions). To REALLY learn how to play, you had to rely on other people. In fact, it didn’t take long understand that it was actually the interactions with other players that really kept you hooked. Sadly, in my case, that’s also what led me to abandon the game after only a month in.

My friends played on a PvP server. As a result, you could be challenged by other players whenever you’d venture far enough into the world. It seemed that every time I’d step outside of the confines of my starting area, I would be bum-rushed by a hostile player. It got so bad that I eventually lost interest in playing. By the time my initial thirty days was over, I uninstalled the game and swore off of MMOs. My experiences with PvP in both Ultima Online and Everquest had sealed the deal as far as I was concerned. In fact, I wouldn’t touch another MMO until the release of Final Fantasy XI, three years later.

I tasted just enough Everquest in its early days to learn what it was and how it worked. I could see the charm that enrapt so many players, but I had become so frustrated with being ganked that I became disgusted. In truth, had I been playing on a non-PvP server, it is very possible that the game would have hooked me. If that had happened, I very well may have played it for years to come. Today, Everquest is nineteen years old. It’s still online and has a jaw-dropping twenty four expansions under its belt. The base game is now Free-to-Play with an optional subscription model. For me, the thought of getting back into a game when I’ve missed so much of its history was largely unthinkable.

Recently, I started participating in a special “progression” version of another MMO, RIFT. I found myself enjoying this “fresh start” version of RIFT so much, that I decided to take a look and see what other MMOs were currently offering something similar. To my surprise, I found that Everquest has just launched a new Progression server of their own. So as you might guess… I decided to go ahead and dip in a toe just to see how things felt. 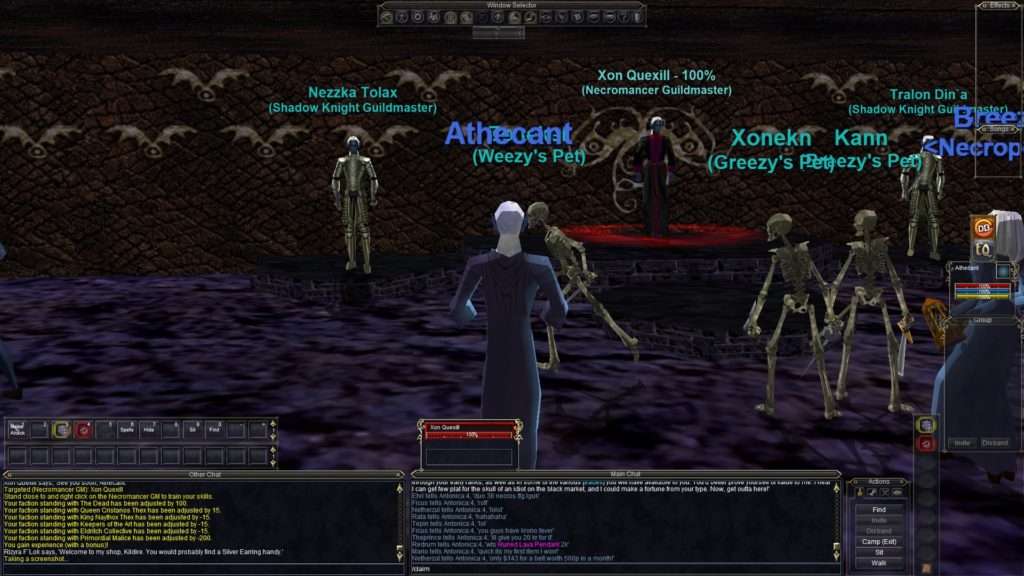 Next thing I knew, I found myself back in the world of Norrath. Of course, I spent so little time there originally and it had been so long since I last played that I remembered nothing. I was completely lost. But, for the most part, this “vanilla” version of the game was just like I remembered. Yes, the graphics were a little more detailed and the the UI was a tad more modernized, but this version of the game is very much like I remembered. The biggest exception has to be with HP and MP regeneration. I seem to remember having to rest and heal HP between encounters originally. But now, they recover automatically.

Being a “progression server”, new content and expansions are added to the game every twelve weeks. At the end of the cycle, the content in the game will match what everyone else is playing on the live servers. After spending a week in this time-locked version of the game, I decided to take a peek at what the current version of the game is like. Needless to say, the modern version of Everquest is very different. 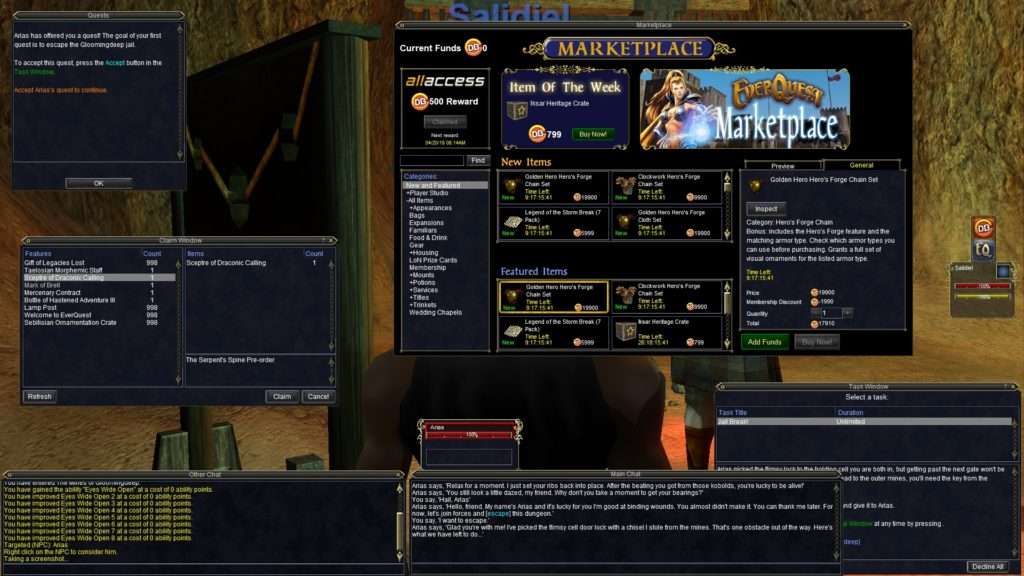 I enjoy retro games. So for me, the fun in this little walk down memory lane has more to do with the look-and-feel of the game than with the content. It’s simply too late for me to become emotionally invested in a title as vast as Everquest at this point. I don’t see myself continuing to pay $15 a month or investing the time to reach the end of this progression server experience. But, I’ll enjoy it for a while. I simply owed it to myself to take another look back at a game that served as the inspiration for Final Fantasy XI, arguably my favorite game of all time.

If you’re a fan of any modern MMO, be it World of Warcraft, RIFT, Final Fantasy XIV, etc – all of these games owe a debt to Everquest. This is the game that made them all possible. These days, EQ is almost unrecognizable from what it once was. Add-ons and changes have taken a lot out of what once made the original game magical for so many. But, perhaps it is still worth a look for those fantasy online gamers who want to explore their roots. 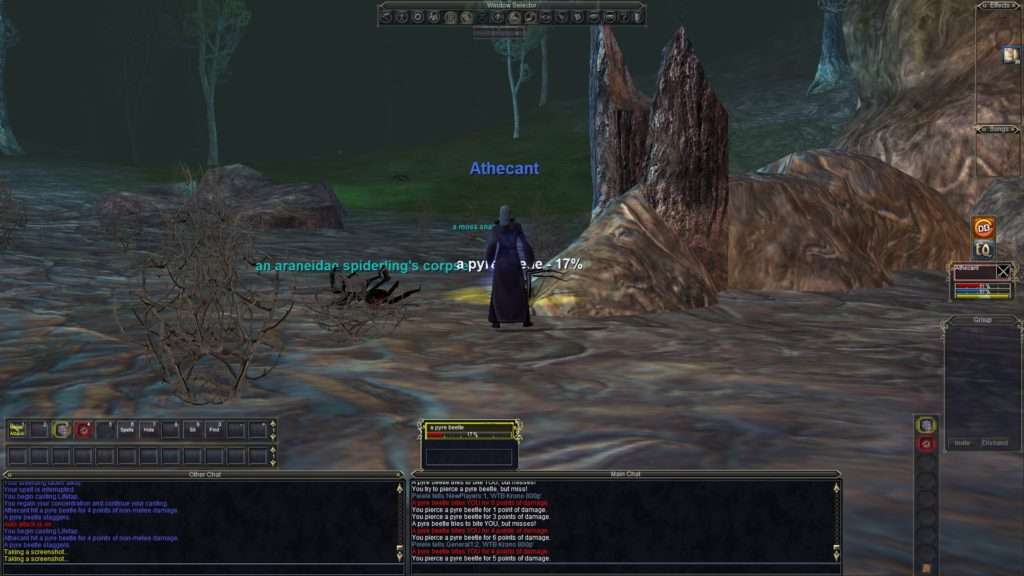