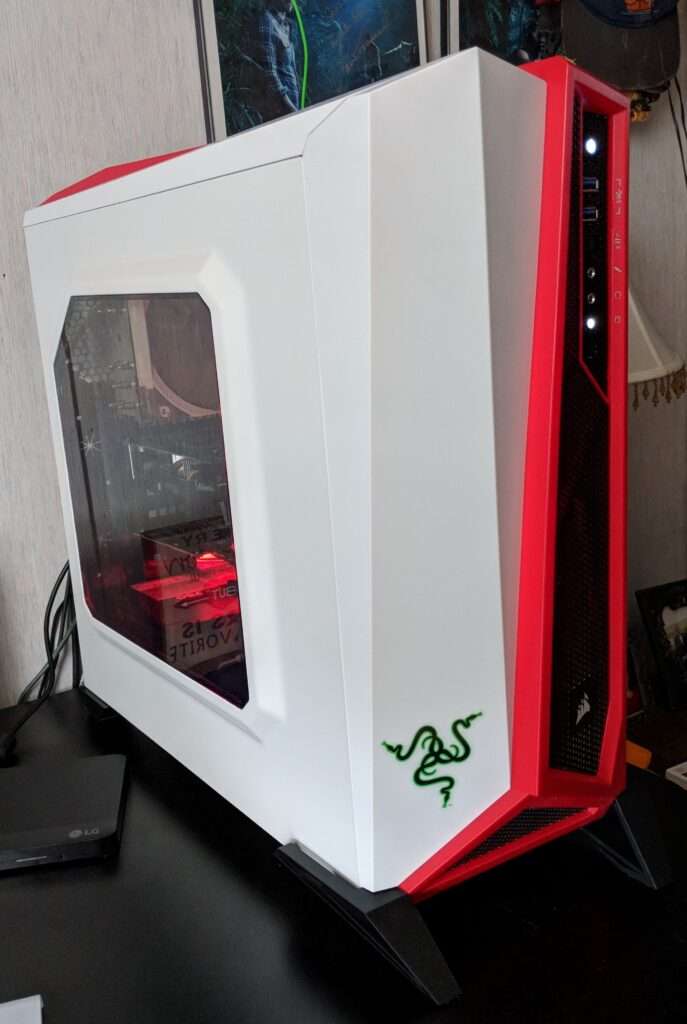 The day has arrived! After almost a decade I’ve finally built a new PC. In my last post on the subject, I discussed my options; would I stick with an Intel processor or would I venture off and try one of AMD’s new Ryzen CPUs? Would I stay a loyal Nvidia user or jump ship to ATI? Well, the time to reveal my decision is here….

After doing a lot of research, I decided to ultimately stick with Intel. Despite the whole Spectre/Meltdown debacle, the latest generation of Intel chips still seemed to be the way to go. Despite having a larger core and thread count, the Ryzen 7 still comes up short in terms of most performance benchmarks. The only exception to that seems to be with workstation-style tasks. But for day-to-day use and gaming, Intel is still the king.

Following my personal rule of “build for longevity”, I did decide to go with Intel’s new Coffee Lake chip. In fact, I ultimately decided on the i7  8700k. At the time of this writing, this is currently the fastest Intel CPU on the market. Despite being the “latest and greatest”, this wasn’t an easy choice. The 8700k is famous for running pretty hot. So if I decided to experiment with overclocking (something I don’t usually do), heat issues could potentially be a factor. With this in mind, I decided to spend a little extra and go with a high quality cooling tower from Noctua instead of sticking with a stock Intel fan. 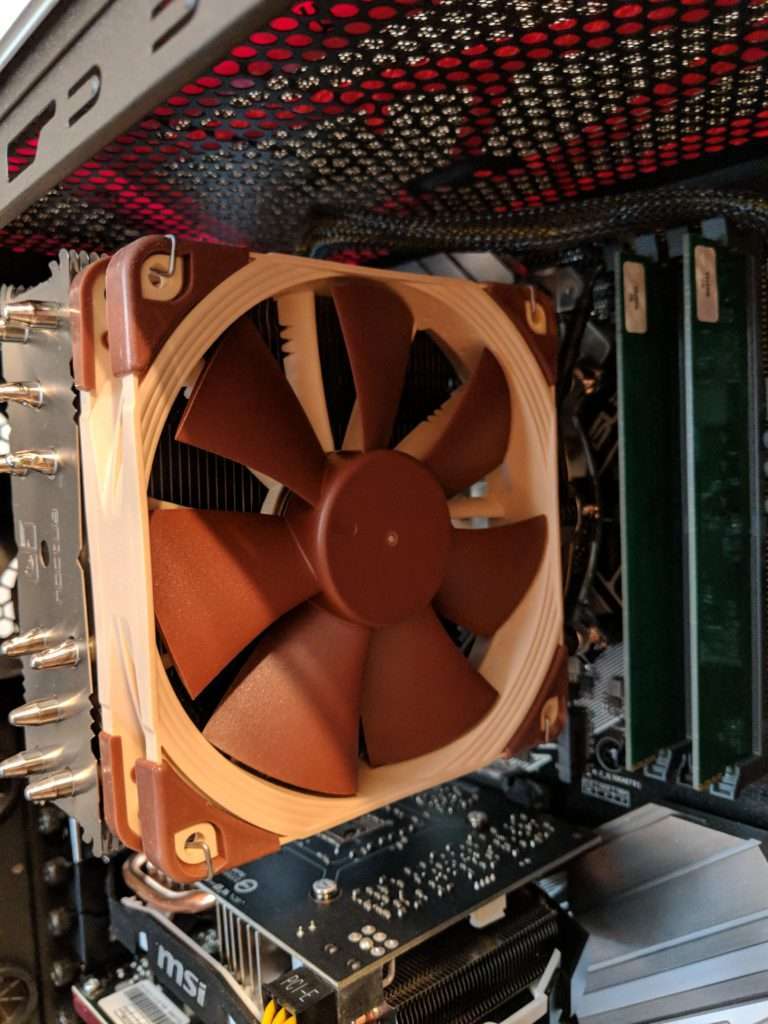 Noctua fans are world renown for their quality and durability. Plus, they are quiet as a mouse. I know many people would have considered going with a liquid cooling solution. But again, I don’t typically overclock. I build my PCs for longevity and I’d rather get my power by purchasing top of line products rather than pushing more performance out of a chip than is expected. Of course, that being said, I built my entire system with cooling and airflow in mind, so I may experiment with some very mild overclocking in the future. By my calculations, I should easily be able to get about 20% better performance with just some minor tweaks that shouldn’t result in that much more heat.  We will see.

For a mainboard, I went with the ASUS Prime Z370-A. Unlike their “ROG” boards, the “Prime” line from ASUS are geared towards middle of the road users. It features all of the customizability options without some of the extra flashiness. Option-wise, it contains all the slots and ports that I needed for my purposes, and still offered enough options for future upgrades.

For storage, I did end up finally going SSD. I purchased a small Western Digital Blue 500GB SSD for a boot drive.  I stuck with a hybrid SSD/HD for a secondary drive instead of going full SSD for storage. I tend to keep a large music library and I also like to have a lot of room for gaming, so going full SSD is just not cost effective for me at this time. 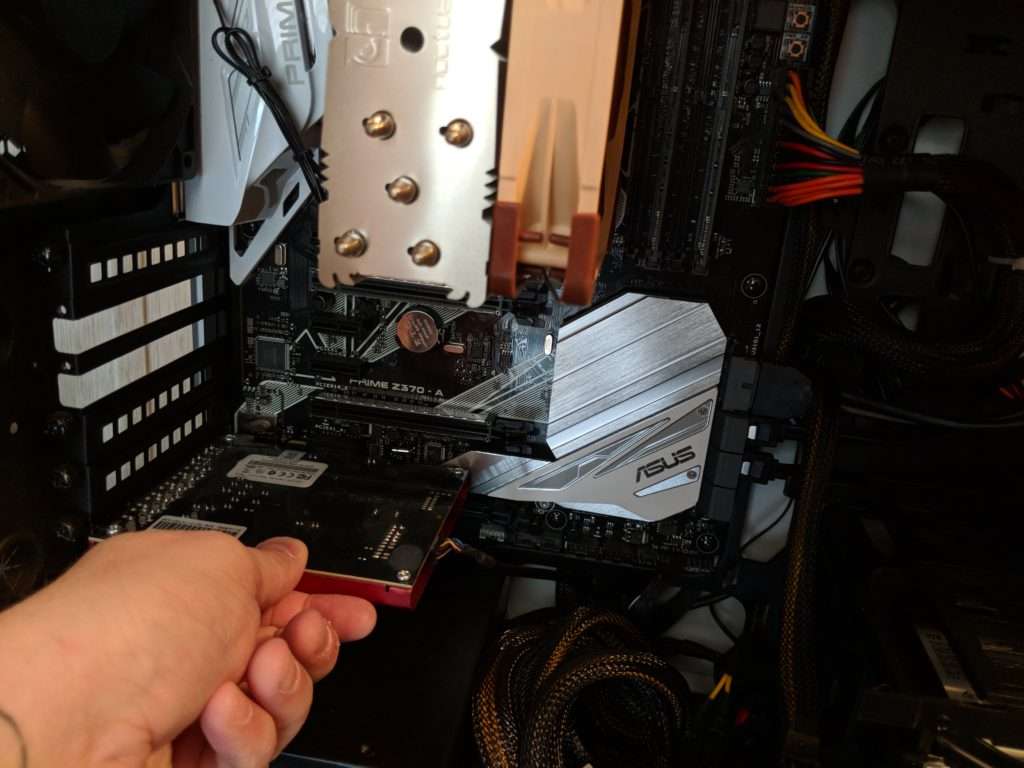 I ended up keeping my existing Sound Blaster Z card in this rig. Since I actually do a lot with audio production from time to time, I prefer to use a real soundcard to on-board sound. But I couldn’t see enough in Creative’s new Sound BlasterX AE-5 card to make me consider an upgrade. The Sound Blaster Z is still plenty for me.

I also ended up retaining my old Corsair CX750 Power supply. This thing is a medusa of cables, however. So I seriously considered going with a new modular PSU. But in the end, I was able to route and tuck away any excess, so cable mess wasn’t an issue. This is an important part of system building that people then to overlook. Proper airflow in a gaming PC cannot be dismissed. When building a PC, I always make sure to route wires and cables behind the back panel and secure them with cable ties.  Any unused wires are also secured and kept out of the way.

To ensure optimum airflow in a PC, you also have to make sure you have the right case. For me, I decided to go with the Corsair Carbide Alpha. This chassis had plenty of room for my needs, it also features two front intake fans and one rear exhaust fan. The intake fans feature a three-way speed switch on the front of the case. – Now, I know some would admonish me for this set-up considering I dropped a big honking CPU cooling tower right in the middle of airflow lane. But surprisingly, this does not interfere with the case’s ability to “breathe”. The Carbide Alpha features venting on the back card panels as well as the ceiling of the case. The air circulation is not impeded by the large heatsink/fan in any way.

The new case design did mean having to finally let go of my internal DVD drive habit. This is something I’ve been reluctant to do. But I managed to pick up an inexpensive USB DVD Burner and so far it’s worked out better than expected. 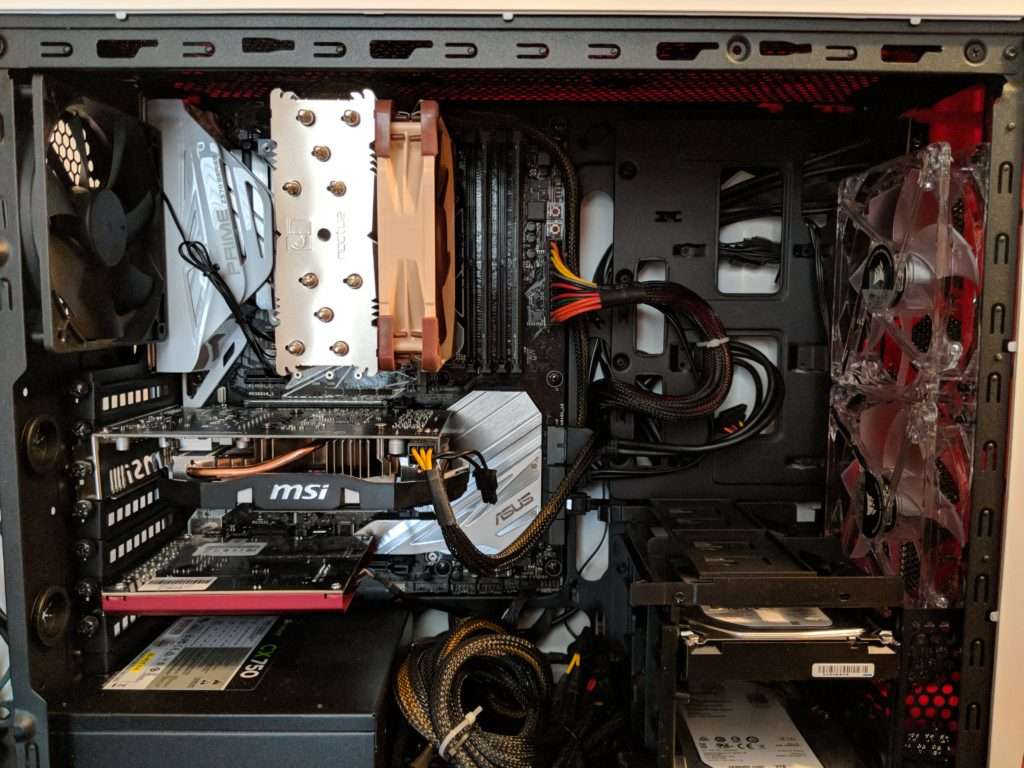 For a GPU, I did decide to upgrade my old GTX 960 to a GTX 1060. I know that is only a modest step up, but right now with the ongoing crytpo-currency craze, GPU prices are just too unreasonable. There was no way I could afford a 1080 or one of the AMD Vega 64s at this time. For the curious, my card of choice was the MSI GeForce GTX 1060 6G OCV1.

I also took the opportunity to upgrade some of my peripherals. I ditched my aging Logitech Surround speakers and went with a newer 2.1 speaker system. I chose the Soundblaster Kratos S5. These speakers are a popular for their 24bit USB connectivity. But, considering I use a good quality sound card, I actually connect them directly with an audio cable instead. Soundwise, they are amazing. The volume range and clarity is exceptional. My only complaint lies in the volume knob that’s hard-tied to the speakers. It seems a bit finicky… At its lowest setting, sound can still be heard through the tweeters. It doesn’t seem to have a “true-zero” position.  I often listen to music at low volume when I work, so being able to turn the volume down to nearly nothing is important to me. For now, I’ve had to rely on a combination of using the OS volume controls in conjunction with the speaker knob… not an ideal solution. But it allows me to have a sound-neutral setting on the knob.

Finally, I also decided to take the plunge and jump on the hype-train that is Razer. For years I’ve heard people tout the benefits of Razer mice and keyboards. But, I never really believed they were that different. While shopping for components, I found an old holiday bundle on sale and decided to bite the bullet and give at go. It included a Cynosa Pro keyboard and a Deathadder mouse. I have to admit, that I was shocked at just what a difference these products make. Until now, I was using a cheap Logitech Mouse and Keyboard combo. It switch has been night and day. That being said, the Cynosa pro isn’t a mechanical keyboard like many of Razer’s products, but quality difference is still undenyable. I can’t recommend this simply upgrade enough.

The cherry on top to the whole project was the purchase of a quality office chair with lumbar and neck support. I use my home chair for work and play and I’m often in it 10 hours a day or more. Truth be told, this was probably the most important purchase of the lot.

In the coming weeks I’ll be doing a full “My Tech Picks” post that will elaborate a little further on some other changes to my overall gear and rig. Stay tuned! 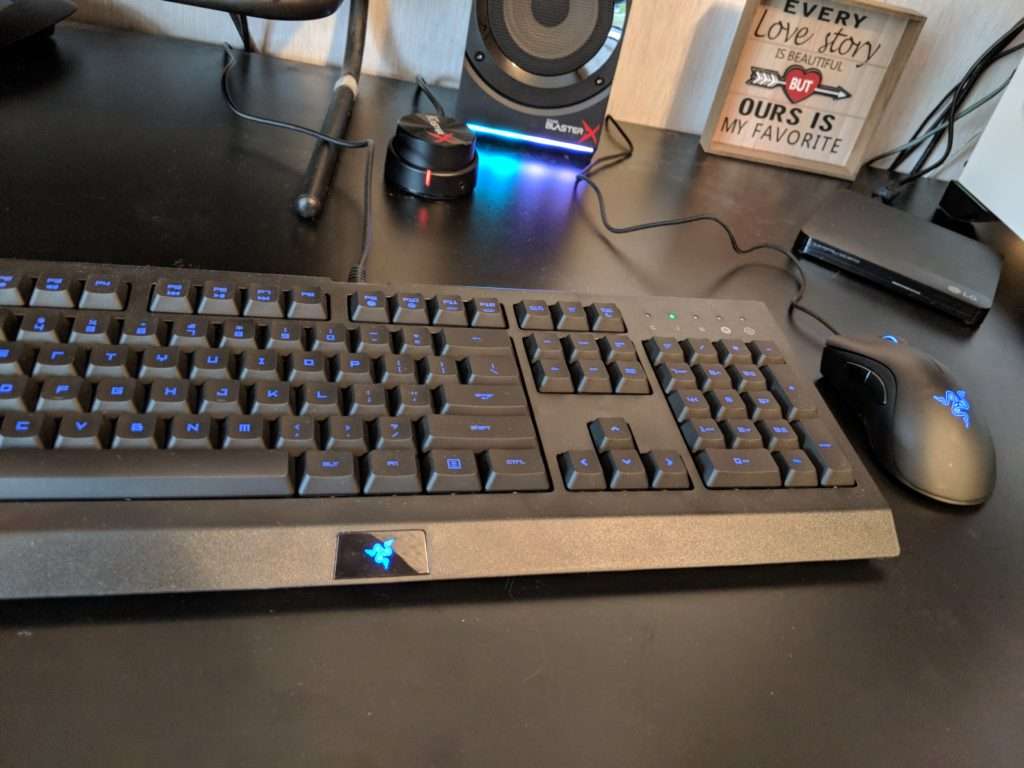