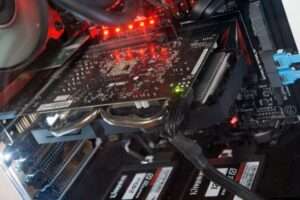 WARNING: This post is going to be very nerdy and technical.

The time has finally arrived… I am building a new PC.

It’s been a year since I last made a “My Tech Picks” post. But if you follow them, you’ll know that my personal PC is getting a little long in the tooth. In fact, I built it back in 2010.  Over time, I’ve made a few upgrades here and there to various components. (Video card, hard drive, monitor, etc). But I’ve been rocking the same core system for the last eight years. A few months ago, I went to purchase the latest Wolfenstein game on Steam and I noticed that my PC didn’t meet the minimum requirements to run the game… It’s time for an upgrade.

My current CPU is an older  Intel Core i7 950.  This was one of the first generation Core i7 processors (AKA: Nehalem). Today, the Core is still Intel’s main product, but we are currently in the 8th generation (AKA: Coffee Lake).

I always build my own PCs. When I do so, I build them for longevity. So my personal rule of thumb is to go with the best components you can get without having to take a second mortgage on your house. This is especially true when it comes to the CPU and mainboard. Most everything else can be swapped out with relative ease. So I always try to get the very best processor available. Well, a lot has changed in the last eight years since I built my last computer. To so get started, I have a big choice to make: Do I stick with Intel or will I go rogue and snatch up an AMD processor?

Over the years I’ve built a number of PCs. I tend to prefer Intel processors since they usually outperform whatever AMD is offering at the time. In fact, of the eight PCs I’ve built for myself, only two of them have ever contained AMD chips. To be honest, Intel usually outperforms AMD in nearly every benchmark. But, AMD typically offers their CPUs at a much cheaper price.

Today, things are very different. Both Intel and AMD’s latest CPUs are priced about the same. Also, this time around, AMD’s Ryzen 7 processor boasts some serious tech-specs that put the current Core i7 to shame (at least on paper).  The latest Ryzen 7 1800x features 8 cores and 16 threads versus Intel’s  6 cores and 12 threads. But, Intel still takes the lead in clock speed. Then, there’s the whole Spectre/Meltdown controversy to consider… Intel is susceptible to both and AMD users only have to worry about one.

When it comes to graphics, I almost always use Nvidia products. I’ve owned a few ATI cards over the years, but I’ve generally been dissatisfied with them. ATI cards almost always tout better specs, but they tend to fall short when it comes to their driver performance. But, things are different this time around. ATI’s latest card the Vega 64 is a BEAST. It delivers top of the line technology at a mid-grade price point. Not to mention, my current monitor supports Freesync technology. This is a big plus if I own an ATI card. Of course, the biggest problem is actually getting my hands on one. The Vega 64 cards are supposed to retail for $500. But due to the crypto-mining craze, they are literally sold out worldwide. The only way to get your hands on one is to dish out over $1,000 to a reseller and even then, they are still nearly impossible to find.

This problem isn’t isolated to just ATI cards either. Almost any GPU is going to come with an inflated price at the moment. And there’s really no end in sight for the shortage. Some experts say prices should normalize in the fall of 2018, while other predict it might go on for two-three years. Literally speaking, this is the worst time in history to try to build a gaming PC… But I won’t let that stop me. Worst case scenario, I could always keep my Geforce GTX 960 and wait for things to settle down. But, I think I can find a few mid-grade cards at an affordable price that would still be an upgrade over my current setup.

I plan to build within the next couple of weeks. So which will I choose? Intel or AMD?  Nvidia or ATI?

I’ll be making an announcement on the site later this month.