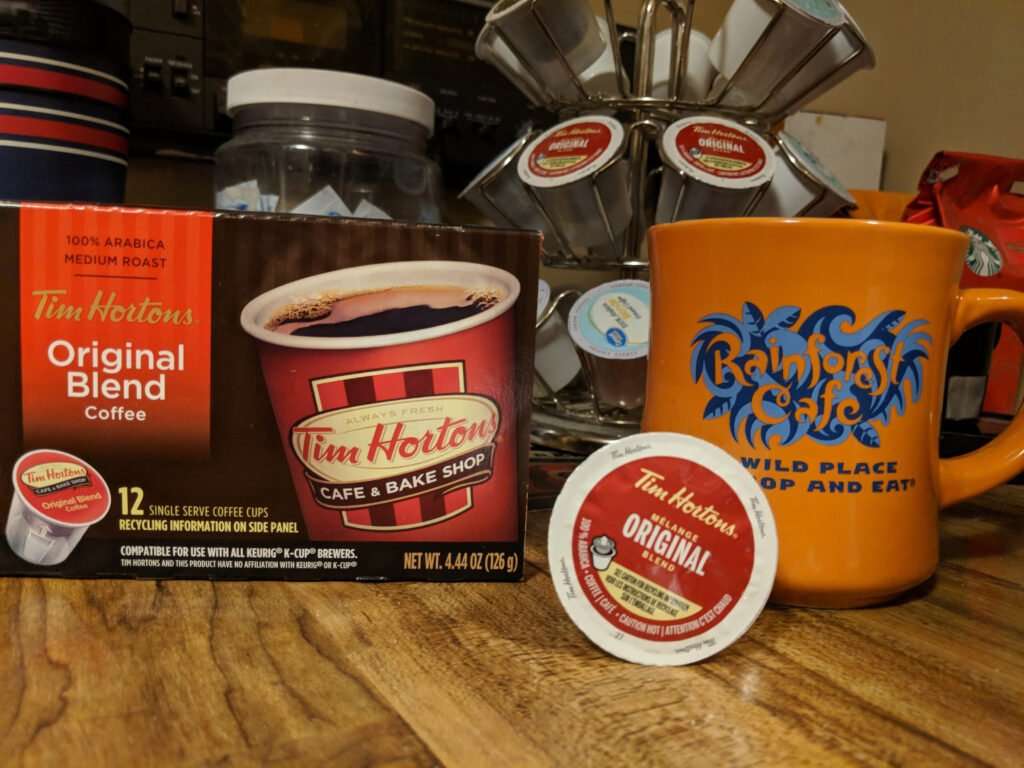 It has been a few months since I made a Nerd Fuel post. To be honest, my post frequency on the site has been down considerably since the start of the year. I’ve been spending every last free minute grinding away at Xenogears. (A behemoth of a game.) I finally completed the title today (a review will be coming shortly), and I don’t think it would have been possible without the help of my good friend caffeine. As always, my quest for the perfect cup of joe continues. This time, I found myself back in the “donut shop” with a box of Tim Horton’s Original Blend.

So far on this site I’ve reviewed a number of “Donut-Shop”-style coffee. But Tim Horton’s is one variety that has eluded me until now. Some people swear by it. But for those American readers who, like me, live in the southern part of the country – the name Tim Horton’s may not ring any bells. It is not a brand that has a foothold in this part of country. But up north and especially in Canada, it is a household name. Tim Horton’s is a popular restaurant/bakery and, as you might have guessed, they are also famous for their coffee. I’ve personally never been to a Tim Horton’s so when this box arrived in the mail I was very eager to see if it lived up to the hype.

I went in expecting a pretty mild, run-of-the-mill flavor. That is exactly what I got. In both aroma and in taste, there was absolutely nothing spectacular about this cup. It is very mild and smooth and like most “donut shop” offerings, it is designed to please nearly everyone. It is enjoyable, but not particularly compelling. When compared against other coffees of the same type, I feel like it beats Dunkin Donut on richness. But it doesn’t hold a candle to Krispy Kreme or The Coffee People’s “Donut Shop”. That being said, I can easily imagine it to be the favorite of many coffee-drinkers. With this type of brew, a lot of it boils down to region. If you grew up on the stuff, you’re likely to favor it over a competitor. But in reality, if we are being honest with ourselves, they are all pretty much the same (save for some minor nuances).  For me personally, “Donut Shop” is still the reigning champion in the category.

Would Purchase again?: Maybe. It’s not bad. It should be acceptable to nearly anyone, but there are some better options out there.