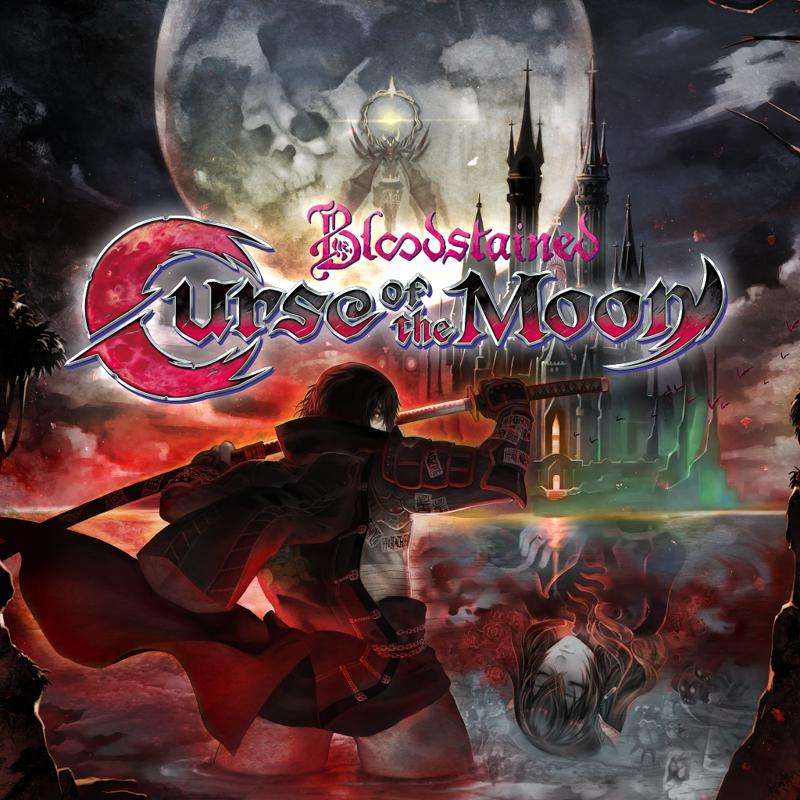 It’s been three years since Koji Igarashi (or IGA, as he tends to be called) unveiled his plans for “Sword or Whip?” – the spiritual successor for the Castlevania franchise. Since that time, the game has been given a proper name; Bloodstained: Ritual of the Night. The game itself is still in development with a release date scheduled for later this year. So, to hold players over, IGA has released a small spin-off title called Bloodstained: Curse of the Moon.

As many know, Bloodstained is a game born from the ashes of the Castlevania series. For many years, IGA was in charge of the franchise while he was employed at Konami.  Ritual of the Night is viewed by many to be the modern continuation of the gothic-horror/platformer genre.  So if RotN is the future, what is CotM? This amazing little game is essentially a retro-clone. It’s presented in the classic 8-bit style that so many Castlevania fans will be familiar with. And yes, it serves as a prequel to the upcoming Ritual of the Night. As such, it is a delightful nod to the old-school roots that serve as the foundation for what IGA is about unveil. 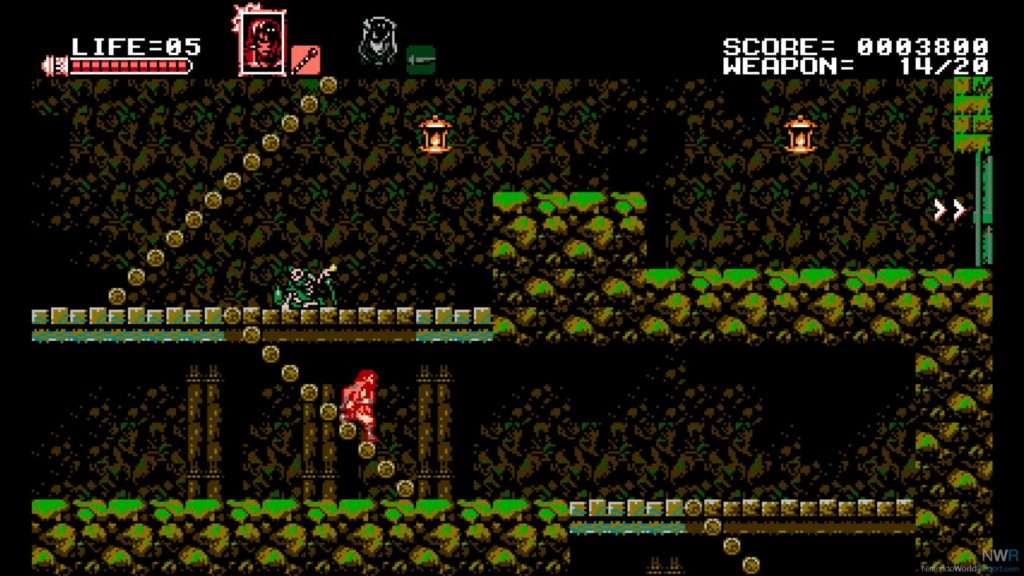 The storyline for this title is surprisingly well done and it sets up the events leading into Ritual of the Night.  In a nutshell, the story goes like this: In the 18th century, science is on the verge of overtaking the long-practiced arts of magic and alchemy. In attempt to maintain their grip in the modern world, a group of alchemists conduct experiments on innocent people, implanting dark crystals into their bodies in hopes of summoning a demon. The experiment is successful, but instead of controlling the entity, the demon breaks free of the alchemists’ control and opens a portal to hell itself. Monsters and demons pour from the portal and overtake the countryside. Enter hero: Zangetsu – a blade-wielding demon-hunter. His only goal is to hunt down and destroy the source of the demonic infestation. During his journey he encounters the following other adventurers:

Miriam: A young girl who was taken as a child by a mad alchemist. Subject to the experiments mentioned above, her body was fused with cursed crystals – giving her demonic powers. Freed by Zangetsu, she seeks to hunt down the demonic entities with her enchanted whip.

Alfred: One of the alchemists responsible for unleashing the demonic threat. Fueled by his search for an ancient text, he will let nothing stand his way, be it human or demon.

Gebel:  Also a victim of the alchemist’s experiments, Gebel somehow managed to survive the ritual. However, his body continues to slowly be consumed by demonic energy. He seeks revenge against humanity by embracing the darkness that now consumes him.

When the game starts, players are in control of Zangetsu. As they continue to clear levels in the game, they will unlock the other playable characters. The player can switch between characters on the fly. Each character offers a slightly different style of play, with benefits and drawbacks of their own. 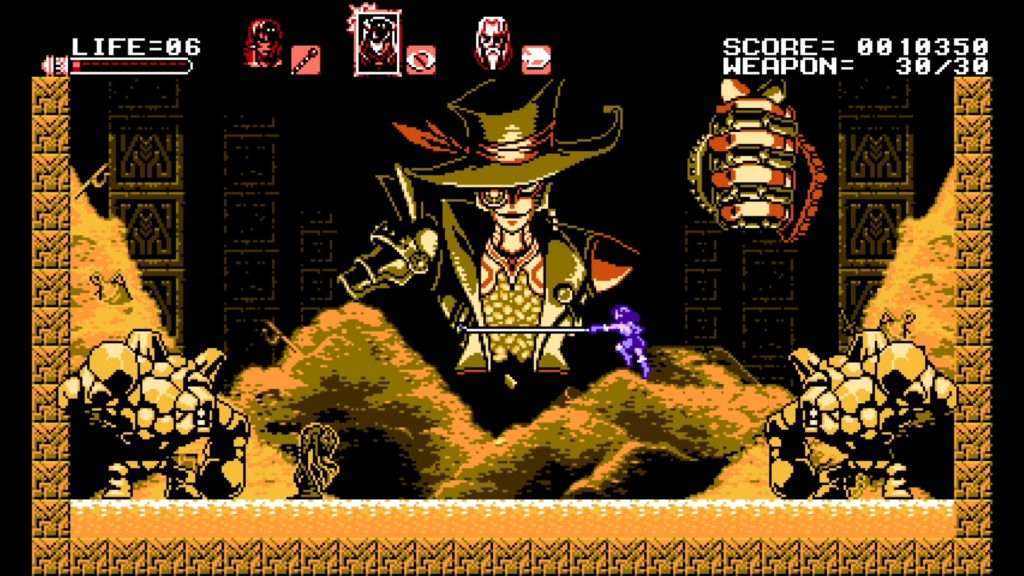 The game itself is VERY reminiscent of the NES-era Castlevania games, Castlevania III especially. The graphics, sound, level design, and overall presentation make this feel like a long-lost entry in that series. Everything that there was to love in those games can be found here, but with some more modern concepts thrown in as well. This makes Curse of the Moon feel like an evolution of those retro games instead of just a carbon-copy clone.

The game itself offers two difficulty levels from the start. Casual Mode offers unlimited lives and disables the knock-back that is experienced when a player takes damage. The Veteran Mode provides a more retro experience. Lives are finite and losing them all will result in players having to redo the entire level over again. Regardless of the mode selected, the game is not quite as difficult as the original Castlevania titles it is based on.

Upon completion of the game, Nightmare Mode is unlocked. This allows players to replay the game from the beginning with the additional characters already available. There’s also a Boss Rush mode that can be unlocked as well.

In the end, Curse of the Moon is both an excellent tip-of-the-hat to the games of yesteryear, as well as a clever set up for things to come. Everything about the game from the graphics to the enemy design is there to remind you of those classic Castlevania titles. But other aspects such as the depth of the storytelling to the well-designed boss battles, give players a hint that Bloodstained is going to be so much more.

I was blown away by this game. My level of excitement for Bloodstained has increased tenfold. This is a game worth a look. 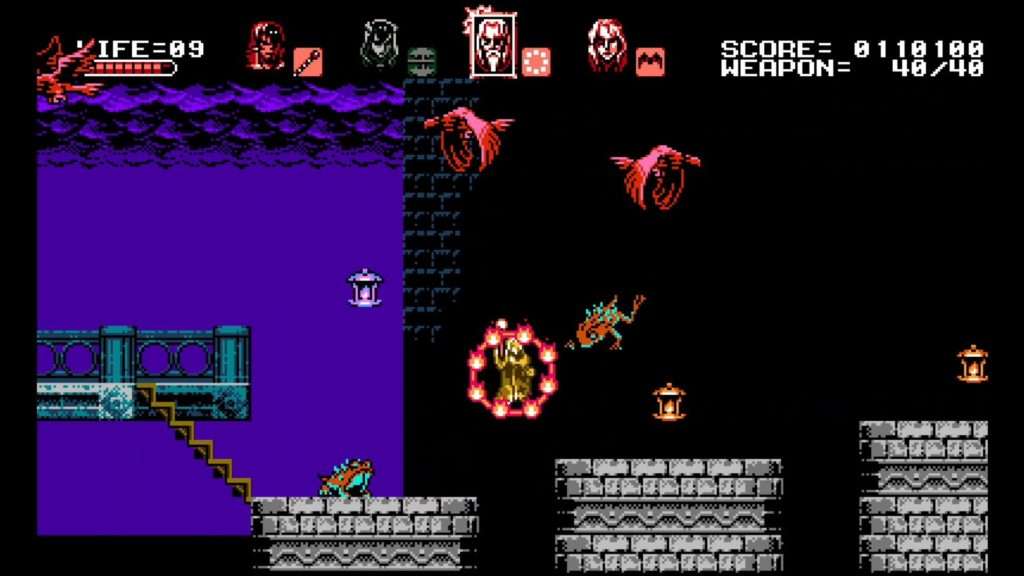 Difficulty: Medium –  When stacked against the platformers of the past, Curse of the Moon is considerably easier. Even in Veteran Mode, this game is nowhere near as difficult as say, Castlevania or Castlevania III. The boss fights are probably the hardest part of the game, but the battles all contain patterns that are easy enough to learn and master. This is true even for the secret hidden boss available in the game’s alternate mode.

Story: The backstory for this game is surprisingly well done. It is presented at the start of the game and through readable in-game dialogue. This whole title actually seems to serve as a set up for the upcoming Ritual of the Night. I’m glad to see there’s actually some interesting lore for this new franchise. I’d hate for RotN to end up as nothing more than a poorly constructed style-clone.

Originality: Despite paying homage to retro Castlevania titles, Curse of the Moon manages to somehow feel fresh and exciting.  Maybe it’s because it’s been a while since we’ve seen anything like this. I’m not sure. But I do know that playing this game didn’t feel like a tired slog through memory lane. Instead, it felt like the start of something new and exciting.

Soundtrack: Classic retro bit-tunes. The soundtrack really took me back to the days of my youth. Most of the music was catchy and appropriate, but it honestly doesn’t hold a candle to some of the great jams we were treated with in the old Castlevania games.

Fun: This game took me by surprise. I was expecting to simply get a nostalgic smile or two out of it. But, instead I was floored by how good it was. The intricacies of the characters and the polish of the game design are simply brilliant. This little downloadable title is way better than it has any right to be.

Graphics: This game was designed to mimic the classic 8-bit NES era. With that in mind, it does a perfect job. By today’s standards it is not going to blow anyone away. But then again, it isn’t supposed to.


Playcontrol: If there’s any major improvement over the original Castlevania titles, it is this. The controls are responsive and accurate. No sluggish movement, no lag, No complaints whatsoever.


Value:  Backers of the Bloodstained Kickstarter can download this game for free on the platform of their choice. All others can purchase it for $9.99. In my opinion, this is a more than fair price for a game of this quality.

Overall score (1-100): 75 – Despite being a retro-inspired game, Curse of the Moon is a quality product. I love the way the developers used the 8-bit era to create a prequel for their upcoming title. It let’s the players know the source of the developer’s inspiration, while setting the stage for the next era. This title is a love letter to older gamers like myself, but I really feel that even younger players who grew up with their PS3’s and Xbox 360’s will find enjoyment in this title. My only complaint is that the game is a little short and a very niche product.