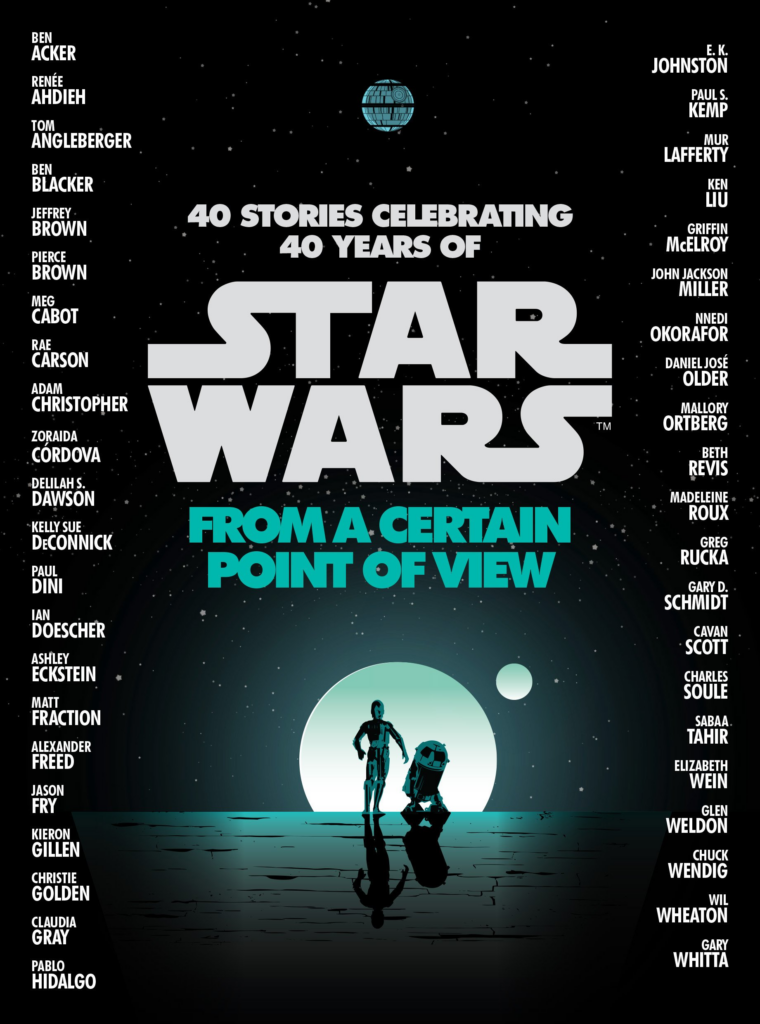 It has been a while since I posted a review of a Star Wars novel. In truth, I think I suffered from a bit of Star Wars burnout leading up to the release of The Last Jedi. I indulged on so many different books and other Star Wars media at the time, that once the movie was released I found myself needing a break. Now, a few months later, we are on the heels of Solo: A Star Wars Story, so I’m getting back into my groove. This time, I’m taking a moment to talk about a rather interesting entry in the new Star Wars canon; From a Certain Point of View.

This book is a collection of short stories that actually tell the tale of A New Hope, but from the viewpoint of various characters. (Hence the name of the collection).

As expected with any short story collection, some of the tales included in the volume are better than others.  It starts off strong with a story told from the perspective of Captain Antilles. This story does a wonderful job of bridging the gap between Rogue One and  A New Hope and serves as a perfect launching point for the book. But it is then followed by a slightly dull, but still interesting, tale about the Stormtrooper who stunned Princess Leia.

This ebb and flow continues for the first half of the novel. But then everything comes to a grinding halt when we reach the “cantina scene” from the movie. At this point, we are dished out what (felt to me) like too many random short  stories about the various  aliens found in the Mos Eisley Cantina. This portion of the book actually reminded me a lot of the old Expanded Universe novel Tales from the Mos Eisley Cantina. In fact, several of the stories here offer retcons to some of the tales told in that old collection.

The last half of the novel is where things really pick up. There are some really insightful stories about Obi  Wan, Yoda, and even an interesting poem about Emperor Palpatine. It all makes for a very eclectic, if not refreshing book.

All in all, I found this collection to be a mixed bag. Some of the stories are very well done and interesting. Others almost read like satire and feel like throwaway content. Without sounding too controversial, I was also slightly irritated to see more of what seemed like “political shoehorning” in this collection. One story in particular reveals a homosexual relationship between a Stormtrooper and an Imperial officer… Ok. But, why is that important? I feel like if given some context or an important plot point this would make more sense. But to me, it just felt like it was tacked-on for the sake of having something LGBT friendly in the book. But, whatever – Inclusion, I guess.

Despite some minor flaws, I found this book to an overall worth addition to the new Star Wars canon. I enjoyed the “point-of-view” aspect to it, and I hope see more novels follow the same format.

Story: Mixed. Some of the short stories collected here are masterfully done. Others, not so much.

Recommended:  For all Star Wars fans.