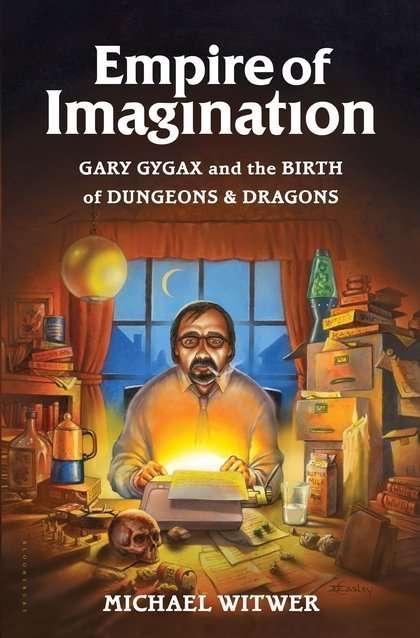 I love to read. When it comes to books I consume everything I can get my hands on. Most of the time I read fiction, but occasionally I enjoy non-fiction as well – especially biographies. A while back I posted a review of Richard Garriott’s autobiography Explore/Create. Being a fan of RPG games, it was just the type of non-fiction I enjoy. A few months later, I found myself itching to read something similar. That’s when I found Empire of Imagination, a biography about the the Dungeons & Dragons founder, Gary Gygax.

That’s right. For those that might not be familiar with Mr. Gygax, he is the original inventor of Dungeons & Dragons. A game that he created out of love rather than for profit.  This book covers Gygax’s life from his early youth all the way until his final days, with of course, the main focus being his time as CEO of TSR. Gary, while beloved by many gamers and grognards, was infamous for his temper and over-indulgent behavior. This book takes a very unabashed look at every aspect of his life. Nothing is off the table here.

Each chapter starts with a mock D&D session that ties-in with the overall theme of the upcoming content. This is an interesting presentation that starts off strong, but eventually ends up feeling a bit weak after a few chapters. Despite being a biography, the book is written in a strange mixture of both historical narration and dramatization. I found this to be a bit odd. Writing out real-life events in a fictional-style narrative tends to cast doubt on the authenticity of the story being told. I have no doubt that the author took a number of liberties when discussing Gary’s life in this regard. However, in the end, I feel like this was nothing more than an artistic decision.

Having been a fan of D&D for many years, I thought I knew nearly everything there was to know about Gary Gygax. This book opened my eyes to a number of details about his life I was unfamiliar with. Namely, how his youth and his deep-rooted love to his hometown inspired his artistic vision. For this alone, I found it to be an excellent read.

If you’re a fan of D&D and you’re interested in learning some of what went on behind the scenes in the glory days of the game, this might be a book for you.

Story: Despite the odd presentation, this book is well written and interesting. Gary Gygax is an interesting case-study. When it comes to running a business Gary seemed to have his heart in the right place, but ultimately made a number of bad decisions that he ended up paying for until the end of his days.

Recommended:  This is a book that’s likely to only be appreciated by hardcore D&D grognards or those with a working interest in tabletop role playing. I personally found the book to be insightful and interesting, but admittedly it’s only going to appeal to a specific audience.