Wow. Here’s a game I never expected to review, Forsaken. That’s right, out of nowhere, this classic title has been remastered and is now available to a whole new generation of gamers.

Forsaken was a game that I actually enjoyed in my younger days. A friend and I both owned the PC version. And together, we spent many hours blasting our way through multiplayer matches. Despite our love for it, the PC release of Forsaken never really seemed to take off with the general public. Instead, most players are familiar with the Nintendo 64 version of the game.

When I started working on my backlog reviews, Forsaken was a game that I desperately wanted to revisit. However, I found the original release to be riddled with compatibility issues that made it nearly unplayable on modern systems. For this reason, I decided to put it on the back burner. But now, with the release of the remastered version of the game, I jumped at the chance to dive back in.

Admittedly, Forsaken is really nothing more than a Descent clone. In it, you play as a futuristic treasure hunter in a hovercraft. You zoom through cramped corridors, blasting other pilots and enemies – with the goal of collecting the treasure and making it out alive.

Like Descent, you can pilot your ship in a full 360-degree range of motion (well, “six-degrees”, if you want to get technical).  The biggest difference here is that you can choose to play as a number of different characters, each with their own advantages and disadvantages. For example, one pilot might have a faster ship, but with a weaker hull or with less maneuverability.  Each pilot also has their own personality that is expressed through a series of audible taunts.

At the beginning of the game, only a handful of pilots are available to play. More are unlocked as you encounter and defeat them throughout the game itself. Now, perhaps it is my faulty memory, but I don’t seem to remember this mechanic in the original release of the game. I seem to recall having a full roster of characters right from the start. Perhaps I’m incorrect on this. Either way, this time around I actually found unlocking the characters to be enjoyable and motivating.

As for the gameplay itself, if you are familiar with any of the Descent games, you already know exactly what to expect; fast paced, flying action. Enemies will swarm you, forcing you to glide your ship behind corners for cover, only to dart back out in attempt to squeeze off a few shots. I found that controls handle very well. In fact, I daresay the playcontrol in Forsaken is an improvement over what was found in Descent. 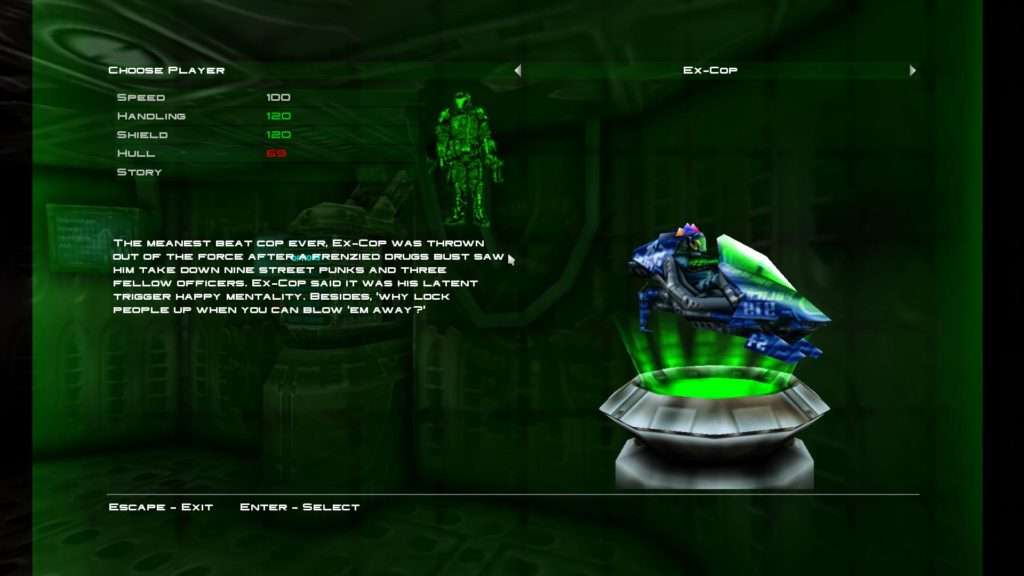 The remastered version of Forsaken takes all of the content from the original PC release and the exclusive levels from the N64 and puts them all in one game, making this the absolute definitive version. The N64 levels are hidden, and must be unlocked by discovering secrets tucked away within the game’s main levels.

If you’re the type of player that likes to hunt secrets, that’s not all. In fact, this version of Forsaken also rewards players with “cheat codes” if they manage to find all of the gold bars that are hidden throughout each level. These codes can then be activated from a menu, providing players with everything from invincibility to alternate textures.

The single player content is entertaining in itself, but the multiplayer mode is arguably the most popular way to enjoy the game. Back in the day, I spent an embarrassing number of hours playing this game online with friends. Naturally, I was excited to try out multiplayer on this new remaster. However, every time I entered the lobby, I found it to be empty.

It seems that the Steam and GOG releases of the game do not share multiplayer lobbies. As a result, you are restricted to playing with others who use the same platform. This seems to be the main issue finding active multiplayer sessions. There’s just not enough people interested in a twenty year-old title. To say that this is a disappointment is an understatement. Despite the potential multiplayer troubles, Forsaken is still a game worthy of attention. Especially for six-degree shooter fans.

Difficulty: Variable – This game offers a number of difficulty settings, ranging from easy to nearly impossible. The settings affect both the number of enemies, enemy AI and even item placement. I found them all to be appropriate. There’s a setting for nearly every skill level.

Story: Games like this do not really need much of a story. The set up here is basic; post-apocalyptic Earth and scavengers.  It is simple, but for a game like this, more than enough.

Originality: Forsaken certainly did not invent the six-degree FPS genre. But it did manage to improve on it. By adding a little personality and some improved graphics and sound, this game brought the genre to a new era.

Soundtrack: One of better highlights of the game. The score for the game is catchy and appropriate; featuring high-energy techno tunes. The voice acting is over-the-top and ridiculous. This remastered version of the game incorporates the “adult themed” voice pack that was previously available as an add-on to the original game. Be warned.

Fun: If you enjoy futuristic, fast-paced FPS games, you’ll feel right at home with Forsaken. Sadly, due to the fragmented state of the multiplayer, it might end up feeling a little lonely.

Graphics: The original game was frequently bundled with graphics cards as a way to show off some of the (then) state-of-the-art dynamic lighting and Direct-3D rendering. These days, the graphics are nothing special, but they still look amazing in their presentation. Forsaken is a beautiful game.

Playcontrol: I found the controls in this game to be a huge improvement over Descent. Something about the default controls here just feels right. If I had to find any criticism, it would be with the UI and weapon cycling. Sometimes the UI seems a bit gaudy and overly large. But, it works.

Value:  Forsaken Remastered is available for $19.99. Despite being an excellent game, I have a tough time recommending it at this price. The amount of a content is appropriate. But when considering the iffy multiplayer, this one might seem more appealing when on sale.

Overall score (1-100): 75 – Forsaken is a long forgotten gem. It is a game that actually deserved the remaster treatment. For the most part, there is little to complain about. The game looks better than ever and is playable on modern machines. However, the best part of the game, the multiplayer – is damaged by the cross-platform wars.