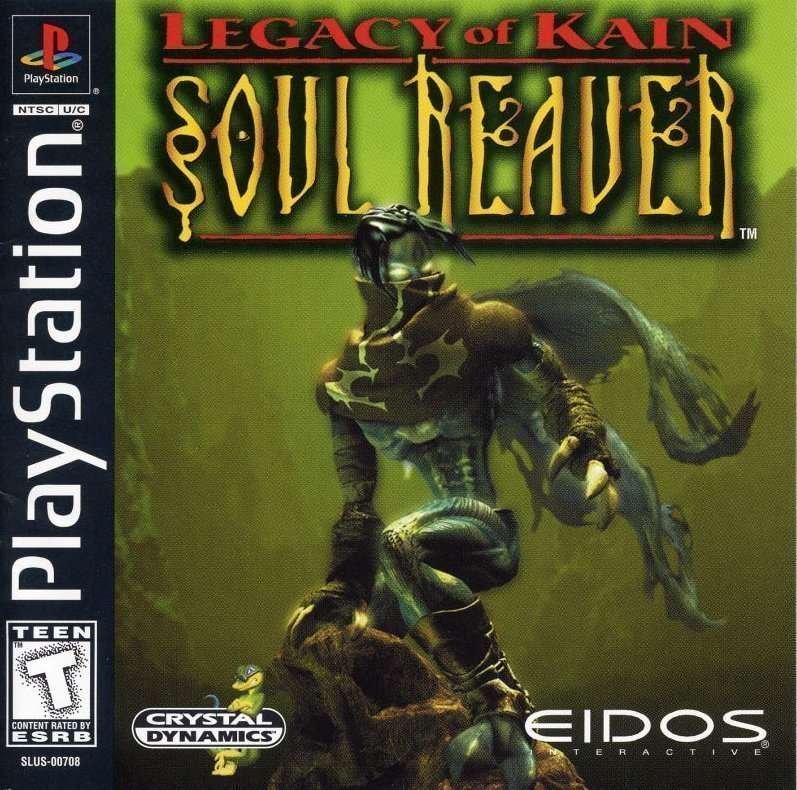 The third entry in my “turn-of-the-century” Final Four is here; Legacy of Kain – Soul Reaver. Nearly two years ago, I reviewed the original title in the Legacy of Kain series: Blood Omen. It was a game that I had no prior experience with, but one that was often recommended to me. Personally, I was not especially impressed with it. I enjoyed the story and the atmosphere of the game. But I found the overall gameplay to be of poor quality. Regardless, I decided to give the second chapter in the series a fair chance. Originally released on the PS1, Dreamcast and PC – this game also connects all of the platforms I’m currently focusing on.

If you’ve played the original Legacy of Kain, it won’t take long for you to realize that Soul Reaver is a very different type of game. For starters, instead of being presented in the overhead view, like the original. This game switched to a third-person action perspective. Soul Reaver also focuses less on mindless combat and more on puzzle solving. In this regard, it is very reminiscent of other games from the era like Tomb Raider, Castlevania 64, or even (to a smaller extent), Ocarina of Time.

This game takes place fifteen-hundred years after the previous chapter. During this time, Kain (the previous game’s protagonist) has become a vampire lord. His armies overrun the land of Nosgoth. In this title, you play as Raziel, a vampire slain by hand of Kain. After his defeat, Raziel finds himself reborn as a wraith. He learns he was resurrected by an ancient god and has been tasked with defeating Kain and restoring Nosgoth to its former glory. Over the course of the game, the player will evolve Raziel’s powers so that he can ultimately face and defeat Kain. 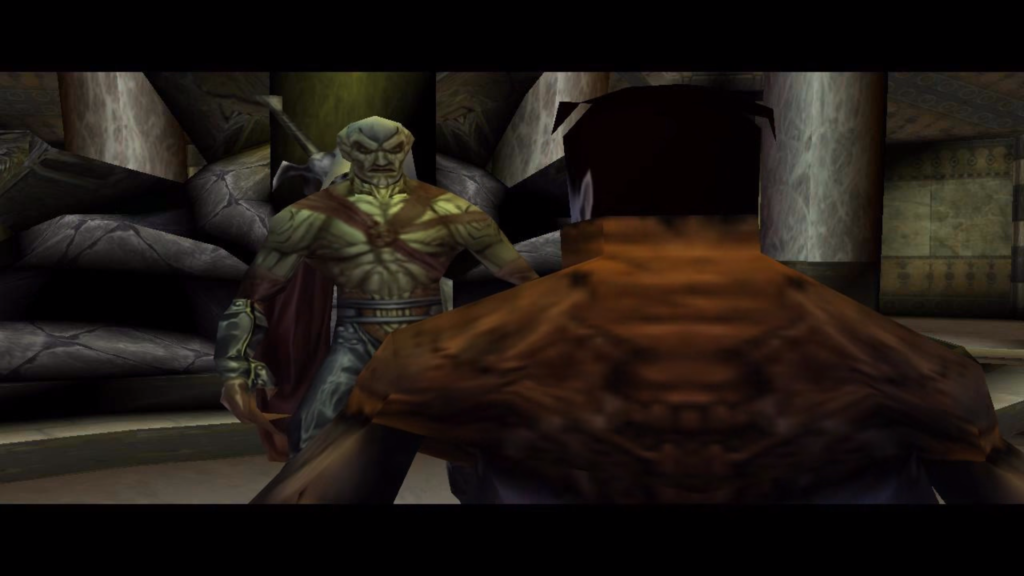 As I mentioned earlier, Soul Reaver is vastly different than its predecessor. In fact, the only similarity between the two games comes from the storyline. In this game, the player controls Raziel in a 3D world. Players can run, jump and interact with objects. Upon defeating enemies, Raziel can consume their souls to restore his health.

The game is presented in a largely open-world format. Players are able to warp around and backtrack using portals that are unlocked as the player progresses through the game.

Since the majority of the enemies found in Soul Reaver are undead, simply beating them to a pulp is not enough to conquer them. Once they are defeated, the corpses must be either burned, drowned, impaled, or exposed to sunlight to be put to rest. Players can do this by interacting with environmental objects or with special weapons. 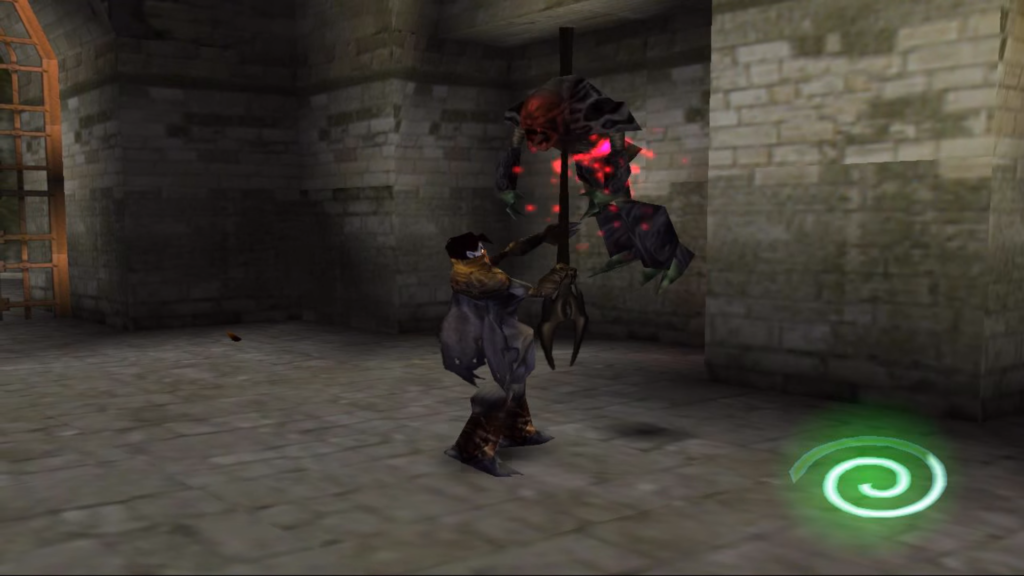 Another major aspect of the gameplay lies in puzzle solving. Players progressing through the game will often come across a number of environmental puzzles. These usually take the form of blocks and switches that must be moved into position or flipped in various combinations. In truth, these puzzles are probably the most challenging aspect of the game itself, but also a large part of what makes the game so memorable.

By today’s standards, Soul Reaver feels very antiquated. But at the time of its release, it was actually pretty revolutionary. Sure, 3D environmental puzzle games were nothing new, but this game provided a level of refinement that was second to none. Combined with excellent visuals and audio, Soul Reaver was quite a thing to behold.

Fans of the series should make every effort not to pass this game up. However, it has not aged particularly well and may not appeal to many gamers. 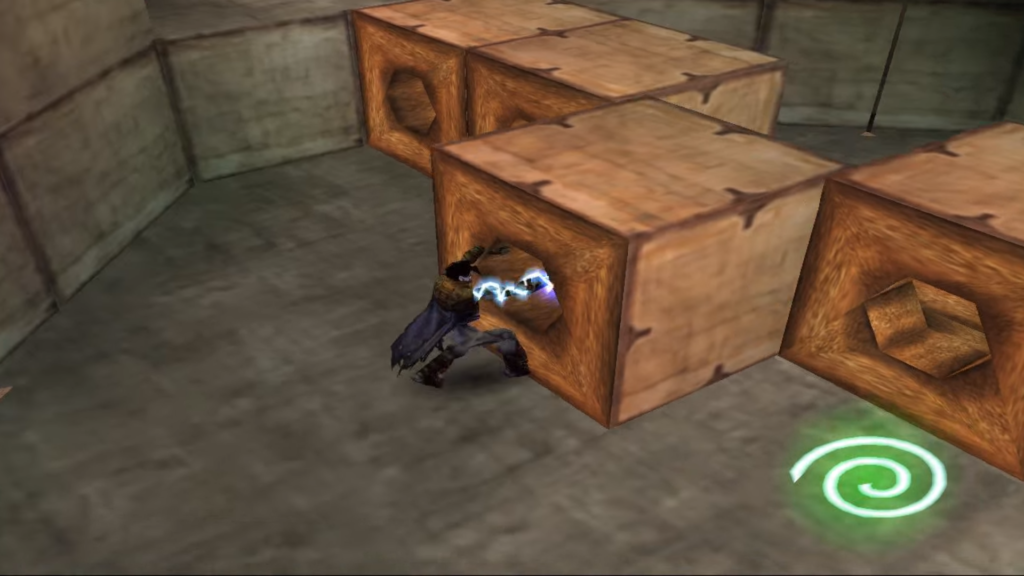 Difficulty: Medium – I’ve heard a number of people claim that this game is exceptionally difficult. I went into it expecting as much. But, I found those claims to be somewhat exaggerated. Sure, some of the boss fights and the puzzles can be a bit tricky. But I didn’t find them to be anything out of the ordinary. All in all, I felt the challenge was just about right for this type of game.

Story: One thing the Legacy of Kain series does well is storyline. The story unfolds through a number of FMVs and cutscenes scattered throughout the game. It is extremely well done. High marks here.

Originality: Credit should be given to the developers for making this game so radically different from its predecessor.  Even though there’s really nothing revolutionary brought to the table in terms of game design, the presentation still manages to feel new and refreshing.

Soundtrack: Superb. The game features an orchestral score that is simply amazing. The music is fitting and really sets the tone for the game itself. Also, the voice acting is second to none.

Fun: Fans of Tomb Raider and other 3D action/puzzle games will likely have a blast playing this game. As will fans of the gothic horror genre. For me, the best part of the game was the atmosphere and storyline. Even when the gameplay started to feel repetitive, the story was good enough to keep me entertained and wanting more.

Graphics: This title was released late in the life cycle of the PS1 and it shows. This is probably one of the best looking games on the platform. If you’re lucky enough to play the Dreamcast version of the game, it looks even better.

Playcontrol: The controls are not perfect, but they are better than most other games of this type from the same era. The camera is pretty accurate and can be rotated using the shoulder buttons. Unlike many early 3D games, it does not get in the way of the action. Occasionally, the controls can seem stiff and cumbersome, especially when dealing with jump puzzles. But overall, it’s not a big issue.

Value:  This game is actually pretty short. In some ways, the amount of content actually makes the game feel incomplete. I completed the whole game in under twelve hours. These days, the game is available digitally on Steam and on PSN for around $6.00. At this price, it’s more than worth it even with the lack of content.

Overall score (1-100): 75 – Legacy of Kain – Soul Reaver is far from perfect. But, it is an improvement to the original. This is one of those weird games that players will either cherish or despise – depending on your style. All things considered, it’s a pretty solid title with a unique feel. If you’re a fan of horror games or gothic settings,  this one is worth a look.