Nintendo fans rejoice! My long awaited review of the “Oracle” games is finally here. This review also marks the first of my GBC/N64 era “Final Four”. It has been a long time coming, but I’m proud to finally discuss these two classic titles.

Oracle of Seasons and Oracle of Ages are two titles in The Legend of Zelda series. They were released simultaneously and as a result are very similar. In fact, they are actually designed with a special “linked game” mode that allows players to import progress from one game to the other. (More on that later).

At first glance, these games seem very similar to Link’s Awakening. The overall art and sound design are almost identical. But, the Oracle games take full advantage of the Game Boy Color’s graphics – resulting in a much better visual experience than even the DX version of Link’s Awakening.

The two games are nearly identical in terms of play. However, Oracle of Seasons tends to focus more on action, while Oracle of Ages shines a bigger spotlight on puzzle solving. The games are designed to be played in any order. But, for those that want to get technical, it is generally accepted that Oracle of Seasons should occur first in the timeline, followed by Oracle of Ages.

Once a player has completed one of the games, they are given a special password. When starting the second game, this password can be entered to enable the “linked game” feature. As the player progresses through the second title, they will be occasionally prompted to enter additional codes. These codes can be obtained by revisiting the completed first game and talking to specific NPCs. Once entered, these codes will grant perks or unlock special items/weapons in the second game. Thus, allowing the player to benefit from having already completed one of the games in the series.  If playing  these games on the original hardware, this same functionality is also available by using the link cable. But, most modern gamers are likely to be enjoying these courtesy of the 3DS Virtual Console.

It is also important to note that if playing a “linked game”, reaching the end of the second entry will activate a special final chapter. This definitive ending is only available for players who manage to tackle both OoA and OoS.

The storyline for the games start off in a similar way. Link is summoned by the Triforce, which then teleports him to a strange land. In Seasons, he finds himself in the land of Holodrum. It is there that he learns about a terrible creature named Onox who has shrouded the land in chaos. Seasons change on a whim and the people are fearful for their lives. To stop this, link must search for the eight Essences of Nature. Once collected, he will be able to defeat Onox and set things right.

In Ages, Link finds himself in the world of Lybrynna. It is here that Link discovers that the Oracle of Ages, Nayru has become possessed. As result, the flow of time has fallen into an erratic mess. This time, link must quest for the eight Essences of Time. Only then can he save Nayru and restore the flow of time to its proper path.

As mentioned above, completing both games unlocks a final chapter that puts a capstone on both adventures and reveals the true villain behind both games.

For the most part, both games play very much like any other Zelda title. Link explores various dungeons, recovers treasure and defeats bosses. The treasure he finds enable him to progress to new areas, etc. The big difference in these games are the introduction of the Seasons/Time mechanic. In OoS, Link gains the ability to change the seasons at will. This is useful in a number of ways. For example, in winter a mountain path might be blocked by drifts of snow. But, Link can change the season to summer so that the path will be clear. OoA works in a similar fashion. Link can travel through time to overcome obstacles much in the same way.

At first, one might think that by releasing two games side by side, Nintendo was simply trying to cash in on the concept made popular by Pokemon. But in reality, these are two completely separate games. The “linked game” mechanic does not come off as gimmicky at all. Instead, it actually feels very revolutionary, even by today’s standards.

In closing, I found both of these games to be flawless works of art. They certainly live up to the high standards set by the previous entries in the Zelda series. No fan’s library is complete without them. 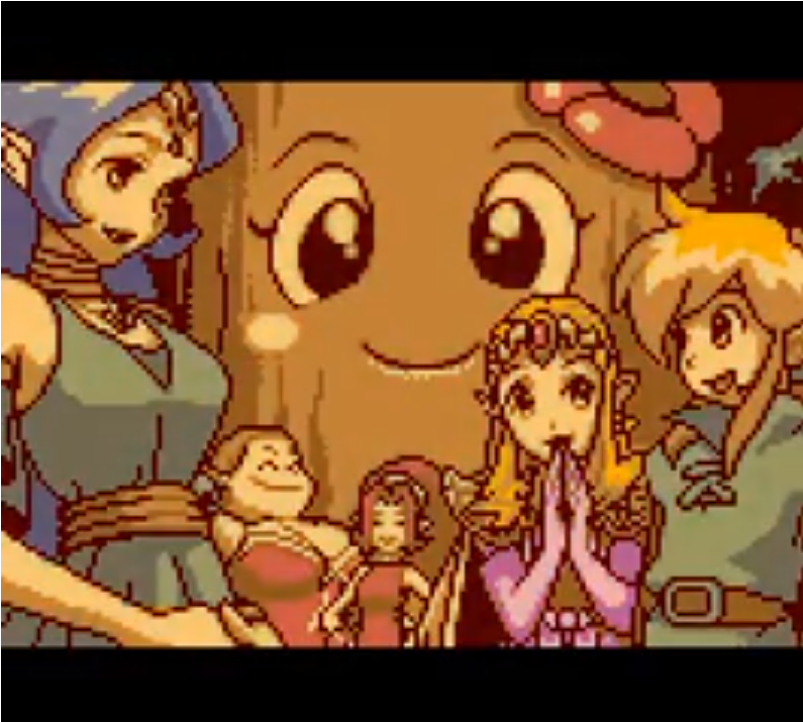 Difficulty: Medium – The difficulty level for both of these games is pretty even. Neither is much harder than the other. I found both of them to be of average difficulty. Some spots, especially boss fights, can prove a bit troublesome at times. But in almost every case, there’s usually a weakness or strategy the be found.

Story: The storylines here are not as in-depth as what was found in the N64 or SNES Zelda titles. But, there’s enough lore here to keep things interesting and to drive players to completion.

Originality: In design, these games borrow heavily from the prior Game Boy title, Link’s Awakening. But the introduction of the Ages/Season switch mechanic, as well as the “linked game” option, really add a breath of fresh air that keep these titles feeling new and interesting.

Soundtrack: For a large part, the soundtrack for both of these games was lifted right out of Link’s Awakening. But each game also offers some of its own unique music. All in all, the new songs are fitting and appropriate, but they don’t reach iconic status of some of the previous titles in the series.

Fun: If you’re a fan of the Zelda series, these games will undoubtedly be enjoyable. The developers did a great job adding Easter eggs from the N64 titles into the these games. Seeing these brought a smile to my face more than once. Plus, It was just plain fun to figure out many of these classic-style puzzles again.

Graphics: There’s only so much you can do with the GBC hardware. But, these games manage to whip out every trick in the book. They are colorful and detailed, despite being held back by ancient technology. These two titles pretty much represent the pinnacle of GBC graphics.

Playcontrol: Overall no complaints. The controls are very precise and accurate. As with Link’s Awakening, the constant menu switching  can get a bit annoying, but it’s a minor complaint.

Value:  Digitally, these games are available on 3DS Virtual Console for $5.99 each. At this price, they are well worth the money. Collectors can expect to pay anywhere from $10-$30 for original copies of the game.

Overall score (1-100): 90 – Despite having farmed out development of these games to CapCom, the quality of both games matches that of any first-party Nintendo title. The Oracle titles are worthy of the Zelda name and I consider them a must-buy for any fan of the series. I played Oracle of Seasons many years a go, but this was the first time getting my hands dirty with Oracle of Ages. To truly appreciate these games, they must be enjoyed in tandem. I can’t recommend them enough.