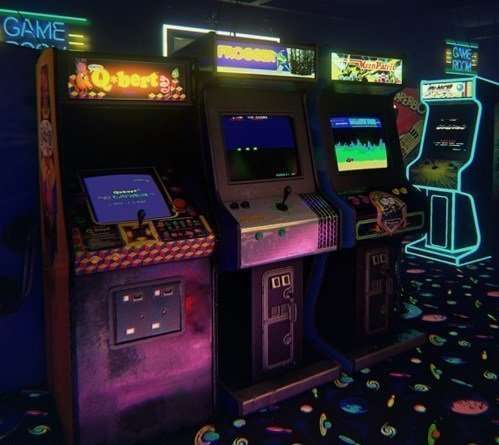 Most kids today will never experience the thrill of setting foot into an old-school arcade. The closest they will get is likely someplace like Chuck E -Cheese’s or Dave & Buster’s. Sure, there may be a few retro-style arcade halls still tucked away here and there. But sadly, they are now few and far between.

Visiting an arcade in the 1980’s was quite an experience. Most of them were loud, dimly lit rooms, filled with glowing arcade cabinets. Sometimes there were neon bulbs or blacklights on the walls and ceiling. Occasionally, there would be a jukebox blasting music that struggled to be heard over the din of the digital beeps and bloops emanating from the arcade machines themselves.

It might be hard to imagine, but once upon a time, if you wanted to play really good games you simply had to fill up your pockets with quarters and head down to the local arcade. This was especially true in the days before the NES hit the scene. Sure, you could play games at home on the ATARI 2600, but the computing power of the 2600 paled in comparison to what was packed into most arcade machines.

The games that were popular during the golden age of gaming are simple by today’s standards. But nonetheless, they are classics and certainly worthy of attention. Now, I’m not going to go into great detail about the games themselves, but I do want to take a moment to provide a list of some of more memorable arcade classics that I enjoyed as a kid. I’m also going to provide details on how you can best experience these retro games on today’s platforms. So, without further delay, let’s dive in.

Space Invaders – This is the original fixed shooter! In this game you control a mobile cannon that can move left to right across the bottom of the screen. You aim at rows of descending aliens that attack you with laser fire. Your cannon is protected partially from attacks by a number of bunker-like shields. If the aliens reach the bottom of the screen, or destroy all of the shields, the game is over. Space Invaders took the world by storm. It was a classic that will forever be remembered by older gamers like me. Sadly, there is not a true port of the original game available on modern consoles or for PC. However, a re-imagined version of the game, Space Invaders Extreme is available on Steam and XBOX Live Arcade.

Asteroids – This is a classic game from my youth. My summer camp had an Asteroids table and I wasted countless quarters on this thing. Asteroids in a top-down shooter. In it, you pilot a ship through an asteroid field. You can rotate the ship 360-degrees and thrust forward in whatever direction you are pointed. Asteroids of various size float by and you must shoot them with your laser, breaking them apart or destroying them entirely – without being hit. The best way to experience Asteroids today is through the Asteroid Deluxe title available on Xbox One or Xbox 360. This version of the game includes both to classic 1979 rendition, as well as a modern HD remake.

Galaxian – Many consider this game to be an evolution of Space Invaders. Also a fixed shooter, in Galaxian, you control a starfighter that can move left to right across the bottom of the screen. Hordes of alien ships line up across the top and attack. But unlike Space Invaders, these ships will swoop down and dive at the player. When comparing the two games, it is easy to see just how fast the technology behind the video game industry was evolving. The original version of Galaxian has been included as part of various NAMCO collections over the years, but it is not available on modern hardware at the time of this writing.

Pac-Man – This is a game that needs no introduction. Pac-Man is arguably one of the most recognizable video games of all time. The purpose of the game is to navigate through various mazes and collect little pellets. Once every pellet is collected, you move on to the next level. The danger lies in being chased by four ghosts. Touching one of them will result in a life lost. However, the tides turn whenever Pac-Man eats one of the larger power pellets. Doing so gives him the ability to chomp down on his ghostly attackers for a limited time. I don’t know a single person who lived through the 1980’s that isn’t familiar with Pac-Man.  The name is synonymous with golden-age gaming. This classic title is available today in its original form on a number of systems. It is available on Steam, PS4, Xbox One, and Nintendo Switch (as part of NAMCO Museum collection).

Donkey Kong – This game was one of the first platform games ever developed. Interestingly enough, it is also the game that introduced the character of Mario (then known as Jump Man) to gamers all over the world. Donkey Kong is a giant gorilla, and he’s kidnapped Mario’s girlfriend! Mario must navigate his way through four levels – dodging whatever Donkey Kong throws his way. It’s a short but sweet classic. It is also responsible for bringing the name “Nintendo” to the attention of the west. If you consider yourself to be a fan of retro classics, this is one game that you should be on your shortlist. Donkey Kong is is currently available on the Nintendo Virtual Console and the Nintendo Switch.

Ms. Pac-Man – At first glance, Ms. Pac-Man might seem to be nothing more than a simple re-skin of the classic Pac-Man. But instead, in many ways it is actually a vastly superior game. The ghost AI is a bit trickier, and the levels are a bit more refined. When it comes to Pac-Man, this is my favorite of the two. It is considered by many, (myself included) to be the definitive Pac-Man experience.  Ms. Pac-Man is available on Steam, PS4, Xbox Arcade.

Defender – Ahh, Defender. This is the game that started the “schmup” craze. Defender is a sidescrolling shoot-em-up style game that’s renown for it’s difficulty and its ability to take quarter after quarter until your pockets were left empty. In this game you pilot a starship. The goal is to defend against an alien invasion force. In many ways, the concept here is similar to what was found in Space Invaders. But this time in an action-based side-scrolling presentation instead of an overhead view. At the time of this writing, the only modern system Defender is available on is the Xbox One via the backwards compatible title; Midway Arcade Origins.

Centipede – For me, this was the game that started it all. Centipede holds of honor of being the first video game I ever got my hands on. Like Space Invaders, you control a little character that can move left to right across the bottom of the screen. The goal is to destroy centipedes before they reach the bottom of the stage. To make things difficult, the game-field is littered with little mushrooms that provide cover for the centipedes. Defeating the head of a centipede also leaves a mushroom behind – providing a new obstacle for your next go-round. To make things even more challenging, slugs, spiders and other creep crawlies also get in your way and attack you. All of this makes for a fast paced arcade experience. Today, the original arcade version is available to play on Xbox Live Arcade.

Frogger – Who could forget this little guy? Frogger is a game in which you control a little frog as he tries to hop to his home. Of course, along the way there are many dangers – cars, alligators and even… water? It’s a game of both patience and reflexes. Frogger is another classic from my youth. It is simple, yet charming enough to survive the test of time. This game has been ported across a number of systems over the years. Today, the original arcade version is available on Xbox Live Arcade (although without the classic Frogger theme song)

Galaga – Many people confuse this game with its older cousin Galaxian. The confusion is understandable. Both games are very similar both in terms of gameplay and design. In fact, Galaga is a sequel (or some argue a reimagining) of Galaxian. The design and concept is nearly identical, but at a faster pace and with a few new elements thrown in. For many players, Galaga is the more memorable of the two. Galaga is currently available on the Xbox Arcade, PS4, Steam and the Nintendo Switch (as part of the NAMCO Museum collection).

BurgerTime – I was never a big fan of this game. My father on the other hand, loved it as did many others, so I’m including it in my list. The object of this game is assemble a number of hamburgers. Each ingredient is suspended from various levels of ascending platforms. The player must climb ladders and run across the ingredients to make them fall onto the waiting bun below until the hamburger is complete. Of course, it’s not quite that simple. The player is chased by various bad guys (sausages, fried eggs, and pickle slices)… It’s weird, it’s trippy… but it’s ultimately entertaining.  BurgerTime has been ported to a number of systems over the years, but at the time of this writing, it is not available on modern hardware.

Dig Dug – Dig Dug is a quirky little game that involves digging tunnels in the ground and inflating pests until they explode… Sounds weird? Well, that’s because it is. But it is also lots of fun. When I was little, Dig Dug was extremely popular at my local arcade. I remember seeing one player (a college kid) actually make it to round 256 in the game. Reaching this final level results in an instant kill, but achieving it was on par with having “conquered” the game. Today, Dig Dug is available on Steam, PS4, Xbox Arcade, and the Nintendo Switch (via the NAMCO Museum collection)

I’m going to take a break here and resume my list in a second post sometime within the coming weeks. If you’re a younger player who is curious about golden-age gaming, or if you’re an old nerd like myself, I encourage you to seek out copies of these classics and give them a spin. Better yet, if you can find one nearby, venture out to an actual arcade and try to relive the glorious days or retro gaming. Being there, quarters in hand, was arguably the best part of the experience.