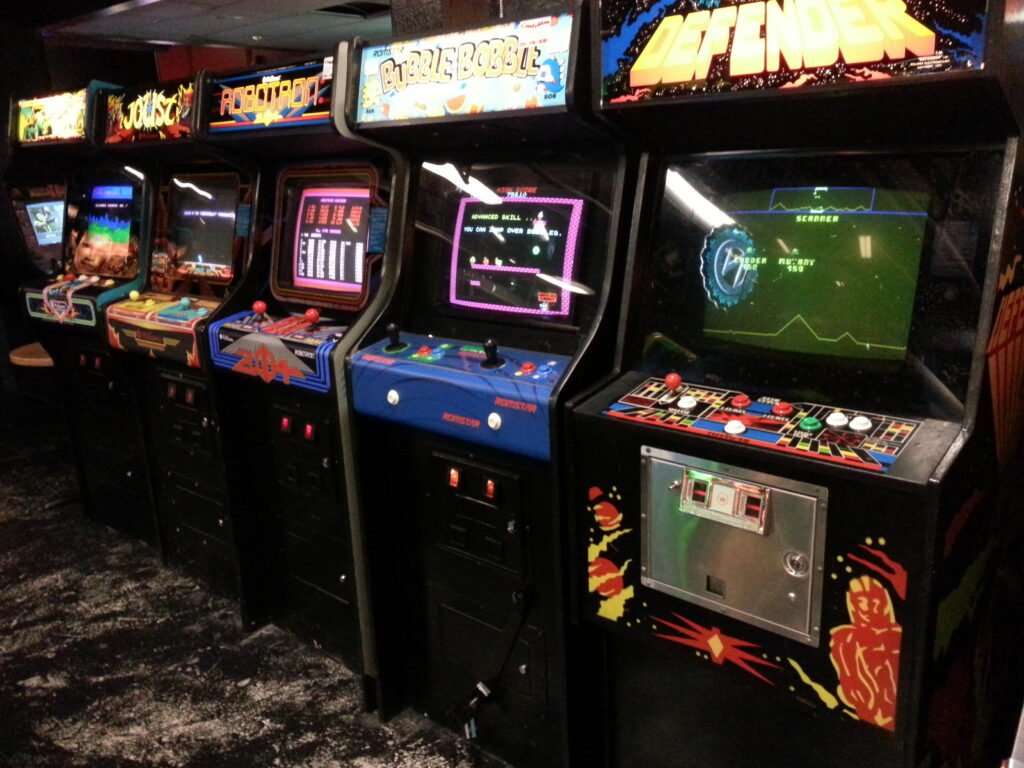 First, I want to start this post with an apology for my absence. When I make multi-part posts like this one, I like to try to have them uploaded no more than a few days apart. In this case it’s been a little over a week since my last entry. This delay was largely due to a recent career change. That’s right, I’m no longer working from home in the banking industry. Instead, I’ve switched gears for something a little more blue-collar. I decided a few months ago that the mental stress caused by my previous job was best abandoned for something a bit simpler. It’s taken me a few weeks to adjust to the new schedule and find my groove. So again, I apologize for the delay. With that out of the way, let’s continue our journey into some of the classic arcade titles of the 1980’s!

Millipede – In the same way that Galaga was a re-imagining of Galaxian, Millipede is an update to the classic Centipede. The gameplay is largely the same, with the exception of some new enemies and environmental objects. Millipede was intended to replace its predecessor. But for many players, myself included, it just didn’t have the same magic as the original game. I’m not sure what it is exactly – as both games are very similar. But I just prefer Centipede over this update. Sadly, if you’re curious about Millipede, you’re a bit out of luck. While Millipede has been released on a number of systems over the years, it is currently unavailable on modern consoles.

Donkey Kong Jr. – In my last entry I spoke a bit about the Nintendo arcade classic Donkey Kong. Well, as you might expect, Donkey Kong Jr. is a sequel to that legendary game. The original game ends when Mario captures Donkey Kong and rescues his girlfriend. In this title, you play as the son of Donkey Kong on a quest to rescue his father. Much like the previous game, this is a fast-paced platform title. It’s a fun twist on the original title and one that I actually find it to be a bit more enjoyable than the first. Donkey Kong Jr. is currently available on the Nintendo Virtual Console and coming soon to the Nintendo Switch online service. I highly recommend this one to anyone who enjoys Nintendo-style platformers.

Joust – Did you ever want to knock out a friend with a giant lance from the back of a speeding bird? If so, Joust is the game for you. While not the first 2-player co-operative/competitive video game, it was arguably the most popular.  In Joust, you can either work together with a friend to eliminate bad guys from the back of a flying ostrich, or you can simply duke it out head-to-head. Personally, I can tell you that when I was young, the whole point of playing Joust was to compete with someone else. It was very therapeutic. In fact, many disputes of my youth were settled via Joust matches. Today, curious gamers can  experience this title via the Xbox Live Arcade.

Moon Patrol – I loved this game when I was a kid. Nothing was better than Moon Patrol. I remember how excited I was to see that the game was finally available on the Atari 2600, only to quickly have that excitement deflated upon seeing just how horrendous the Atari port actually was. It was bad… So, so bad. The arcade was the only way to really experience this classic title when I was a kid. What made Moon Patrol so great? Well, first of all, there was the “moon buggy”. Who didn’t want to drive a funky-looking moon buggy across the lunar surface while blasting aliens and hopping craters? I know I sure did. The game was made even better by the catchy theme song that played throughout the game itself. All of this made Moon Patrol a classic that still withstands the test of time. Moon Patrol is available today on the PS4 and Nintendo Switch.

Pole Position – Need for Speed, Forza, Gran Turismo – all of these game franchises owe their success to Pole Position.  Pole Position is the original arcade racing game. There was no joystick on a Pole Position machine. Instead, the game machine was equipped with a steering wheel and gas pedal. There was nothing else like it at the time. I remember sitting down in the arcade driver’s seat for the first time, I was blown away. This game was unlike anything else I had ever seen. For kids like me, Pole Position set a very unrealistic expectation about what driving a car was actually like – but that’s what makes it fun! Today, you can play the original game as part of the NAMCO Museum collection on Xbox Arcade.  However, the only way to relive the original experience is by sitting inside one of the classic Pole Position machines, assuming you can manage to find one.

Q*Bert – Here we have one of the true classic golden-age titles: Q*bert. When I was a kid, Q*Bert blew me away because it was a video game that could actually talk – well, sort of. The game has a very basic synthesizer built into the audio board. This allowed the game to output obscure vocal tones. However, these phonmes don’t actually end up being combined into English words, instead it was gibberish. The result was very unique and quirky. Regardless, it was pretty groundbreaking at the time. Q*Bert is a game in which each level is comprised of a number of 3D-like cubes. The player controls a funky little orange character that jumps from cube to cube in attempt to change each cube to a uniform color. Once every cube on the stage matches, the levels ends and the game progresses. Of course, there are a handful of bad guys hopping around also. So you must always be aware of your surroundings. This game was a favorite of mine when I was very young. Today, Q*Bert is available on the PS4 and Xbox One as part of Q*Bert Rebooted. This title includes the original classic, as well as a modern re-imagining of the game.

Mario Bros. – Most people you will encounter have played Super Mario Bros. But how many are familiar with its predecessor? That’s right, before they were “super”, they were just the “Mario Bros.” This game is a simple platformer, that consists of a number of stages. Mario (or Mario and Luigi – if playing in two-player mode) must defeat a set number of enemies in order to advance to the next stage. Unlike Super Mario Bros., the characters are unable to jump on top of monsters to defeat them. Instead, they must bang on the underside of the platform that the monsters inhabit. This will flip the monster onto its back, thus allowing Mario to kick them into oblivion. Even though Mario Bros. was designed to be a co-operative two-player title, many people enjoyed trying to sabotage the other player in one way or another. When I was a kid, this was only real reason to play the game. Mario Bros. has seen some form of release on almost every system Nintendo has put out over the years. However, each of these ports have paled in comparison to the actual arcade version. Today, the only way way to play the “true” version of Mario Bros. is via the Nintendo Switch. The game is included there as part of the “Arcade Archives” series.

Gauntlet – If you’re a fan of dungeon crawl games, you owe a debt of gratitude to Gauntlet. This is the game that started it all. Gauntlet is a multi-player action game with a fantasy theme. It supports up to four players, each taking the role of a different hero; Warrior, Elf, Wizard, and Valkyrie – each with unique strengths and weaknesses. The object of the game is navigate through the dungeon maze, face hordes of monsters, collect troves of treasure, and ultimately find the exit. In its day, this game was infamous for draining young arcade-goers of countless quarter. Admittedly, I spent a small fortune of my weekly allowance on “continues” for this title. I was completely enthralled with Gauntlet. In fact, this game might very be responsible for my lifelong fascination with the fantasy genre. For a time, the original Gauntlet was once available on Xbox Live Arcade. But today, this classic is currently unavailable on modern platforms. Instead, there is a modern reboot with the same name. But make no mistake, there is only one classic Gauntlet.

Rampage – If you’ve ever wanted to assume the role of a giant monster and destroy entire city blocks, Rampage is the game for you. In this game, you can control one of three kaiju monsters; a giant ape, a giant lizard, or a giant wolf. The goal is to complete demolish various US cities, stage by stage. Of course, military and other hazards await the player.  Rampage was another game that really shined in two-player mode. Sure, it was fun enough on its own, but experiencing it with a friend makes it even that much better. Today, the original game is available in the Midway Arcade Origins collection, which is compatible with the Xbox One. (Dwayne ‘The Rock’ Johnson, not included.)

The games detailed in both this, and my last post are simply some of my personal arcade favorites from the golden-age of gaming. This is by no means meant to be a definitive list of golden-age classics. Nor should it be considered a complete “best of” list. In fact, there are many more wonderful arcade titles from the 80’s that captured my attention. Classics like Popeye, Bubble Bobble, Dragon Spirit, 1943, and Afterburner just to a name a few – all left major impressions on me.  However, if you are a younger gamer with an interest in retro-gaming, any of the titles mentioned in there two posts are excellent starting points.

Modern games are amazing. But it is always important to remember your roots.