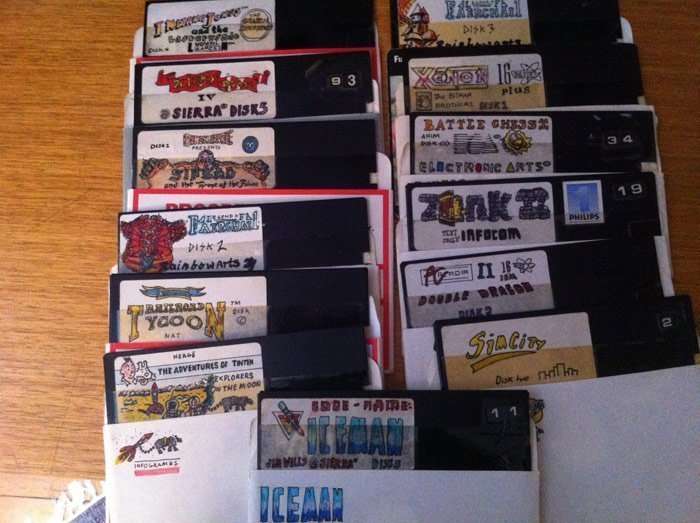 I’ve discussed retro PC games a number of times on this site. In fact, some of my earliest posts were focused on games from the classic Wizardry series. But when I started discussing PC games, I quickly jumped ahead from the 80’s to the 90’s to take a look at titles like Wolfenstein 3D, and Doom. The truth is, PC games from the 80’s deserve quite a bit more attention than I’ve given them previously.

The very first PC game I ever played was called Castle Adventure. I encountered it when I was maybe seven or eight years old.  Now, at this point in my life I was no stranger to video games. I owned an Atari 2600, but I guess I just didn’t realize that you could actually play games on a personal computer. I remember walking down the hall at my friend’s house and seeing his older brother sitting at his desk. At this point, I always imagined computers were exclusively for data crunching and other obscure uses. When I noticed his brother was playing a game, I was a bit puzzled. I stood next to him and watched, completely enthralled.

Now, Castle Adventure was very basic sort of game. It had ASCII graphics so it wasn’t anything particularly exciting to look at. But it captivated me nonetheless. The point of the game is to explore a castle, find treasure, and escape. That simple. But despite it’s simplicity, we spent the rest of the afternoon exploring every nook and cranny of the game. I was a fan.

Today, a faithful ground-up remake of Castle Adventure is available here for Windows:  CASTLE ADVENTURE .  It isn’t pretty, but if you’re curious, it’s the purest experience one can get.

When my family finally purchased a PC of our own, I naturally asked my father for some games. A few days later, he came home from work with a stack of floppy disks that a co-worker had copied for him. Now, back in those days, piracy was not that big of a deal. Making a copy of a game for a friend was as simple as having two floppy disks and knowing how to type “diskcopy” into the DOS prompt. The stack contained titles like Wheel of Fortune, Jeopardy, Battle Chess, etc. All fun, I’m sure, but nothing I saw really caught my eye. That is, until I got to the very last game in the stack. A disk that was obscurely titled “ZORK”.

Of all the games my father brought home that day, ZORK ended up being my favorite. ZORK is an interactive text-based adventure game. It is actually quite a bit older than Castle Adventure. In fact, ZORK is just about as old as I am.  When I say it’s a text-based game, that means exactly what it sounds like. There’s no graphics, just words. For example, the game will present a scenario much like this:

“You are standing in a field in front of a large wooden house, facing south. There is a road leading to the east and west. A forest lies to the north.”

The player then has to type commands to drive the game forward. For example “Walk North” or simply “North”. The game then describes the next set of events. Players can enter command like “Open door” or  “take sword”. The entire game is played in this fashion.

I couldn’t began to guess the amount of hours I spent with this game. And I wasn’t alone either, ZORK was extremely successful. Over the years it spawned a slew of sequels. I’m proud to say, I’ve played every entry in the series and despite being extremely “old school”, they are still quite enjoyable. These days, all of the ZORK games are available on Steam and GOG. I plan on reviewing them collectively at some point in the future.

Naturally, as technology continued to improve, this type of game would eventually be combined with visuals. One of the earliest examples I remember playing was a game called Transylvania. Oh, how I loved that game…  It took the basic gameplay elements from games like ZORK and gave you some crude graphics to enhance your immersion. There were three games in the Transylvania series, but sadly none of them are officially available on any platform today. For me, these games were just amazing. What I wouldn’t give to see some sort of remake or re-release. But, considering how I’ve never met another person who’s even heard of them… I won’t hold my breath.

It was games like these that prepared me for a game that might very well be my favorite game of all time, Wizardry. I’ve talked about the Wizardry games in detail on this site. So I won’t be rehashing them again with this post. But, any discussion of old-school PC games would be amiss without a mention of the series. In fact, when it comes to classic CRPGs, old grognards like myself usually fall into one of two factions. The Wizardry fans and the Ultima fans.

Like Wizardry, Ultima is a series of games that has also reached legendary status. Together, these two franchises set the bar for nearly all future RPGs. Games like Final Fantasy and Dragon Quest would not exist if it wasn’t for these titles.

I could spend hours writing about the impact these games had on me, and I will eventually. In fact, I plan to start a complete playthrough of the Ultima series in very near future. But for now, let’s move on. There’s so much more ground to cover.

The PC played host to countless classic RPGs; Bard’s Tale, Might & Magic, and King’s Quest for example. But RPGs were not the only thing that made PC’s great. Educational games were exceptionally popular on the platform. You’d be hard pressed to find someone my age who doesn’t have fond memories of titles like Where In the World is Carmen Sandeigo? or Oregon Trail. But the PC also played host to a vast library of action games like Commander Keen and Prince of Persia.

As part of my Retro Rewind project, I plan to occasionally revisit some of these gems from the depth of the vault and hopefully introduce them to a new audience.  As I mentioned above, I’m going to start with Ultima. This is a game series that I’ve wanted to review for quite some time, but never took the time to do so. When I was young, I played through the first eight chapters in the Ultima saga, but I never finished the entire series.  The time to complete Ultima is upon us! Once I publish this article I’m taking a brief respite from both my Retro Rewind articles and my regular backlog list to focus exclusively on the series. I hope you enjoy it.