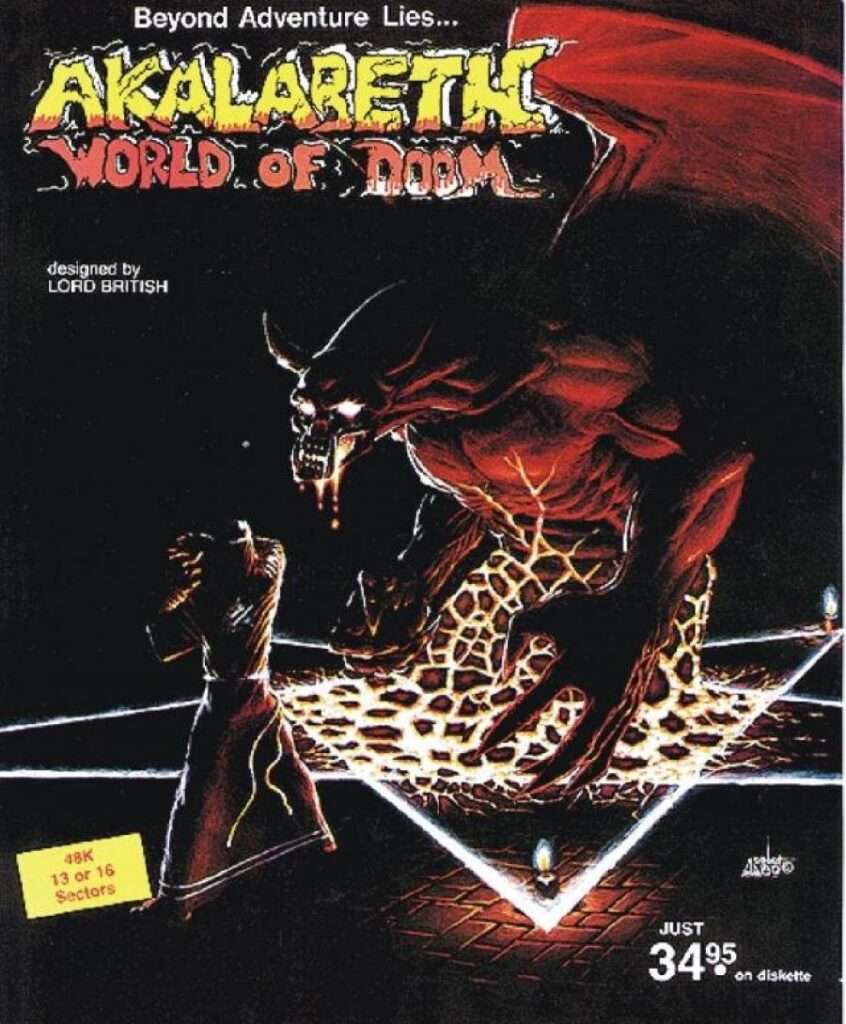 Starting off my Ultima reviews with a game that’s not technically part of the series may seem a bit weird. But in the eyes of many, Akalabeth is indeed the prequel to very first Ultima game. In fact, it is often referred to as “Ultima 0” and was even labeled as such when it was included in the Ultima Collection from 1998.

Akalabeth was the first game published by Richard Garriott (aka: Lord British). Originally only available on the Apple II, a fan-made DOS version of the game appeared on the internet sometime in the mid 90’s. A few years later, an official DOS port of the game was included with the Ultima Collection. These days, the game is available for free on the GOG platform. However, players should be aware that both DOS ports of the game come with their own issues.

The default version offered by GOG is the fan-made port. In many ways, this is the version that is most like the original Apple II release of Akalabeth. However, this release of the game also includes a nasty bug that can make the game un-winnable. (Basically, players are never given a bounty to kill. Thus, have no way to complete any objectives. This breaks the game completely). Once upon a time, there was a patch available to fix this bug. But these days it seems to have been lost to the antiquity of yesterday’s internet. Thankfully, the official port of the game does not have this problem. But it does not maintain the randomly generated levels found in the original release. Also, the 1998 version of the game includes the ability to save and reload your progress. This makes the game very exploitable and takes nearly all of the challenge out of the title. Also, the official version of the game includes color and a midi soundtrack that was lifted from Ultima III. These changes make many purists, like myself, cringe. Thankfully, both versions are actually available on GOG. (The 1998 port is included as a bonus download.) For the sake of this review, I did play the default GOG version. But I generally recommend the 1998 version to most people curious about the game.

The story for the game is simple. Not long ago, the world of Akalabeth was razed by an evil wizard named Mondain. A hero by the name of British rose up and drove the evil Mondain from the land. Now, having been crowned king, Lord British seeks adventurers brave enough to help him cleanse the land of any foul beasts that might still remain. 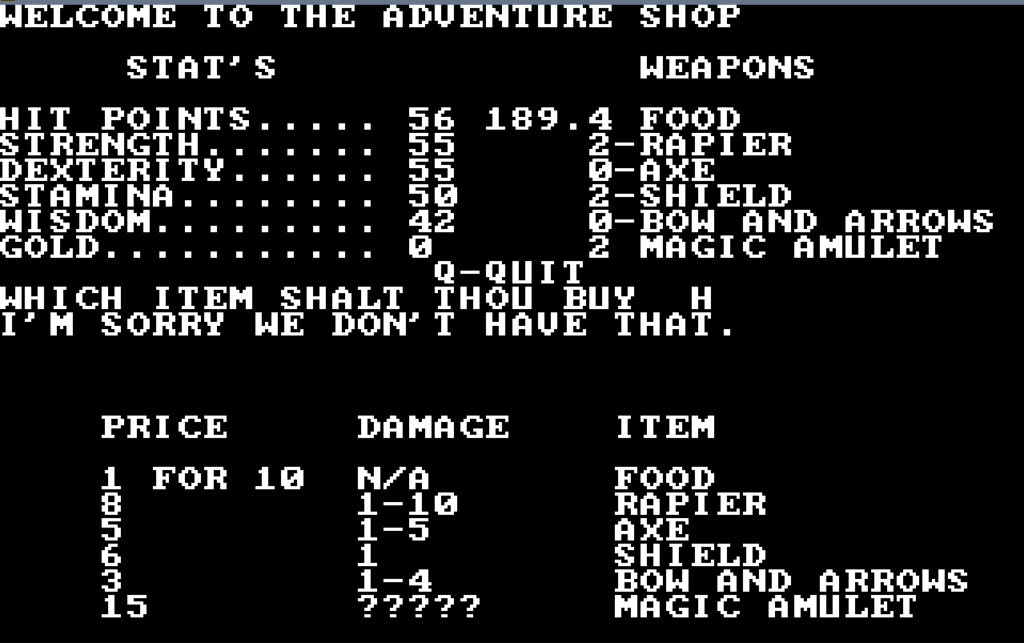 Akalabeth is one of the earliest CRPGs games ever to be made available. And despite appearing to be very basic in its design, it is surprisingly quite complex. When first starting the game, you will be asked to provide a “lucky number”. The number entered here actually serves as a seed of sorts. It helps generate the game’s maps and the character’s stats. Next, you will be prompted to enter a “level of play”. This is essentially the difficulty level for the game. Next up, you will be given a set of stats for your character and you will be asked to either accept them or re-roll. You can continue to re-roll stats for as long as you like until you find a set that seems acceptable, there’s no limit to the number of times you can try.

The game consists of four main screens; shops, the overworld, dungeons, and the castle. After creating your character, the first thing you will see is the shop screen. Here, you can spend your starting gold on a weapon and food. Buying lots of food is crucial in Akalabeth because every step your character takes consumes a bit of food. If you run out of food, you die. Essentially, most players will continue to re-roll their stats until they are given over 20 pieces of starting gold. Then they’ll buy a cheap weapon and spend the rest of the gold on food. If you neglect to buy any food, then you will die the instant you leave town. Brutal.

After leaving the shop, you will find yourself on a very archaic-looking overworld map. The next step in the game is locate a nearby dungeon, enter it, and kill monsters for gold. Each monster you slay will provide you with a few gold pieces. Once you have earned a significant amount of gold or once your food supply starts to run low, you will want to hightail it to the nearest shop so you can replenish your provisions. Once you are able to amass a small hoard of food, it is time to explore the overworld map in search of Lord British’s Castle. It’s also important to note, that each time you leave a dungeon, your character’s Hit Points will increase in accordance with the number of monsters slain. 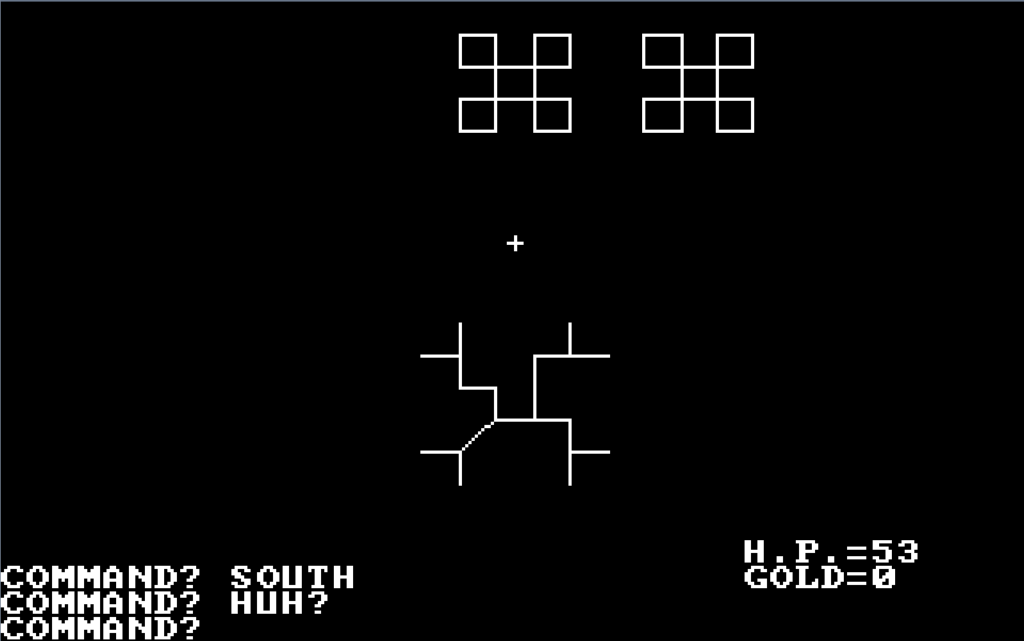 Finding the castle is where the game really starts. From here, you begin a chain of quests. Each essentially requiring you to venture deeper into a dungeon in search of a specific monster. Once that monster is slain, you return to the castle to receive a new quest. Once you’ve slain all the monsters on Lord British’s list, you win the game.

When first exploring the overworld map, new players are often taken aback by the large number of shops and dungeons. The dirty little secret here is, they are all essentially the same. It doesn’t matter what shop or dungeon you enter, the contents never really change. So the real trick here is to simply find a shop and dungeon that are in close vicinity to Lord British’s castle and use only those locations to complete the game.

The dungeons themselves are where the real action takes place. Dungeons are presented in a crude 3D view, very similar to what you see in the early Wizardry games. Depending on which version of Akalabeth you are playing, the layout of the dungeon may change every time you exit and enter, or it may stay the same. Either way, it’s really not TOO difficult to navigate. The grid itself and the ladders leading up and down are always static. Only the location of the doors and the walls vary from level to level. I always recommend that players map out their journey on a piece of graph paper when playing to avoid getting hopelessly lost.

Being an older game, Akalabeth will certainly seem crude and undesirable to many modern gamers. It is definitely not a game most people these days will want to seek out. Personally, I enjoy older dungeon crawls like this. But then again, I grew up with them. I suspect that for many, this game would only serve as a curiosity. But, if you are adventurous and willing to take the time and patience needed to explore everything this game has to offer, you might be pleasantly surprised by what you find. 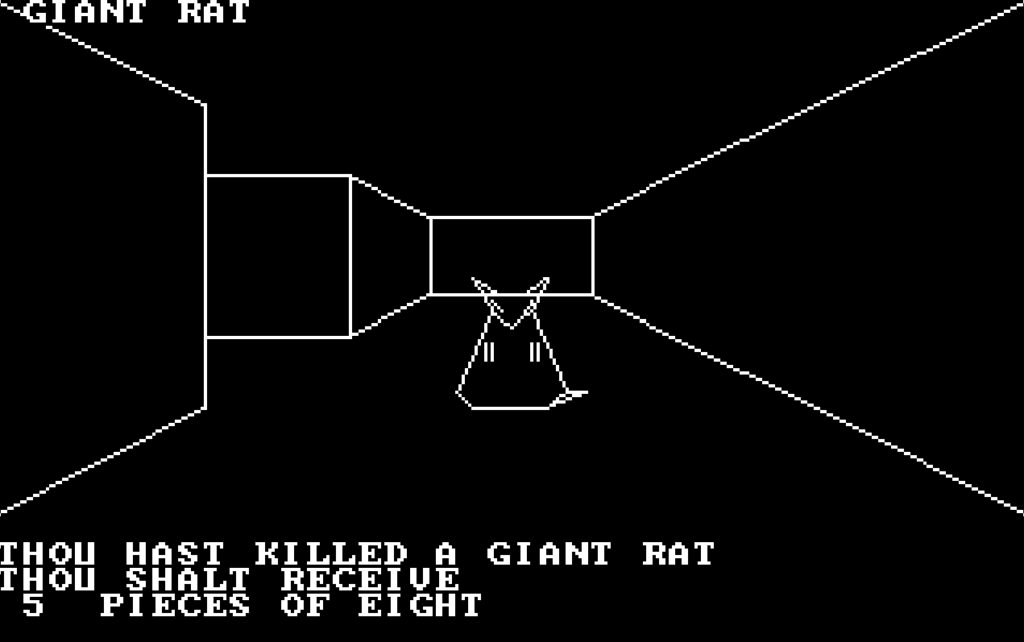 Difficulty: Hard –  If playing the game as intended, Akalabeth offers quite a challenge. Food management can be downright brutal as can many of the monster encounters. That being said, anyone willing to invest a little time in grinding should be able to boost their character to a point that makes the game manageable. If playing the 1998 version, it’s easy to cheese your way through entire game by exploiting a specific save/reload loophole thus reducing the game’s difficulty to nil.

Story: The game features a very barebones backstory. But considering the entire game really nothing more than a programming project by an ambitious high school student, this is forgivable.

Originality: When Garriott began designing this game, it was 1977. Despite being largely inspired D&D and Lord of the Rings, the concept of an RPG-style dungeon crawler was almost unheard of at the time. Some people like to argue that Akalabeth might actually be the first graphical RPG game ever made.

Soundtrack: The original game is silent and has no sound whatsoever. The 1998 release does include some basic noises and midi music (ripped from Ultima III), none of which are particularly impressive.

Fun: For most, this is a hard game to recommend. It’s random and tedious by today’s standards. Old grognards like me might appreciate it. But for the vast gaming population, Akalabeth is a pretty hard pill to swallow. Regardless, if you have a love for old school RPGs like Wizardry and Zork. This game might be worth a look.

Graphics: The graphics in this game are about as basic as you can get. But, for a game programmed entirely in BASIC, it’s actually quite impressive. The dungeons are white on black wireframe. As are the monsters and overworld map. Players on the Apple II get treated to the classic Apple II color palate. The 1998 remake also adds some basic colors to the text and wireframe models.

Value:  Both versions of this game are available today completely free of charge.

Overall score (1-100): 50 – This is a tough one to score. Personally, I really like this game a lot. It reminds me of the games I used to play when I young. But understandably, it would be very difficult for someone accustomed to modern games to wrap their head around something like this. I first encountered Akalabeth in 1998 when it was released as part of the Ultima Collection and I found it enjoyable then. Revisiting it now, I can still appreciate it. But, even I can admit it has not aged very well. This fact, combined with the technical problems of the fan-created port that is distributed by default make it a pretty tough recommendation.