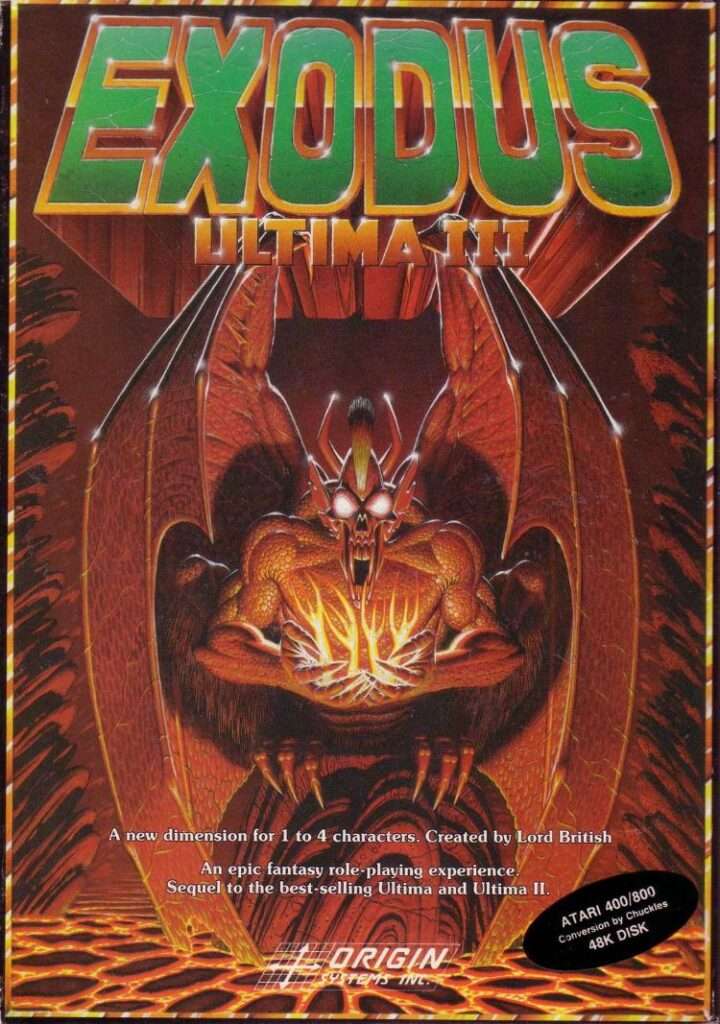 My review for the third game in the Ultima trilogy is here! That’s right, today I’m going to be talking about Ultima III: Exodus. This is a game that’s important for a number of reasons (not just important to the Ultima series, but for the entire CRPG genre as a whole). Ultima III laid the groundwork for, and established a number of design concepts that still remain staples in modern RPGs today. It is arguably the grandfather of all modern role playing games.

When playing Ultima III there are a number of ports and versions to choose from. However, most players today will likely end up with the DOS version of the game. This, like all of the games in the series, is available on GOG. The original DOS release is probably one of the better looking versions of the game, but it does not include the midi soundtrack that is present on most other platforms. Thankfully, this is easily corrected via a popular fan-made patch “Ultima Patcher“. This patch offers a variety of improvements to the game, while still maintaining the original vision of the developers.

Ultima III is final title in the original Ultima Trilogy. As such, it brings an end to overall story of the two prior games in the series. In this entry, it is discovered that Mondain and Minax spawned a “child” – a mysterious entity known only as “Exodus”. Exodus has began its assault on the land of Sosaria from its lair. The player is summoned by Lord British to put an end to the terror. 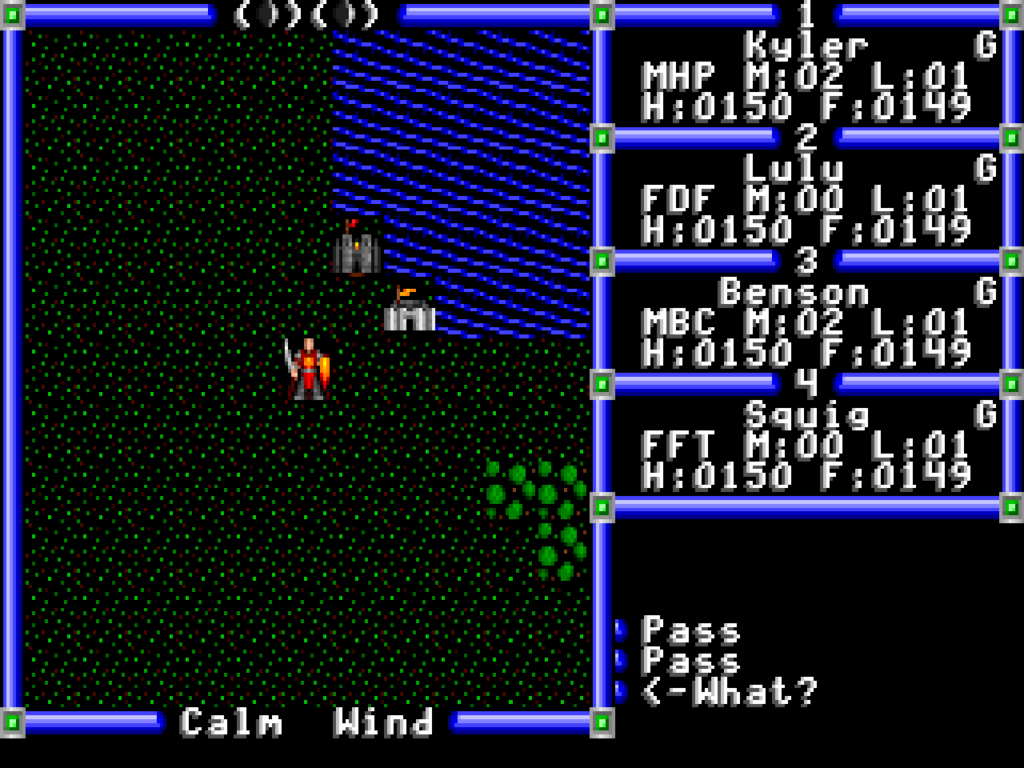 Unlike the other games in the series so far, you do not control a single character. Instead, you now have a party of up to four player-characters to control. When creating new characters, there are a number of race and class options to choose from. Players can select between Human, Elf, Dwarf, Fuzzy, or Bobbit when it comes to race, and Fighter, Paladin, Wizard, Cleric, Thief, Ranger, Barbarian, Lark, Druid, Illusionist, or Alchemist for classes. Each class specializes in a certain style of play. For example, Fighters can use any weapons and armor, but have no spellcasting ability. Other classes, like Alchemist, have access to a limited list of weapons and spells. It’s up to the player to determine what combination of races and classes they find most beneficial. Of course, the key is to strive for balance when setting up your party. A good party will consist of attackers, support characters, and magic users.

Party-based RPGs were not a new concept. The Wizardry games are all based on this idea. But Ultima III was the first game to combine party-based tactics with the overhead exploration that the other entries in the Ultima series made famous. The end result was nothing short of amazing. Bringing together these two styles of role playing games marked the beginning of a new era and set the standard for years to come. 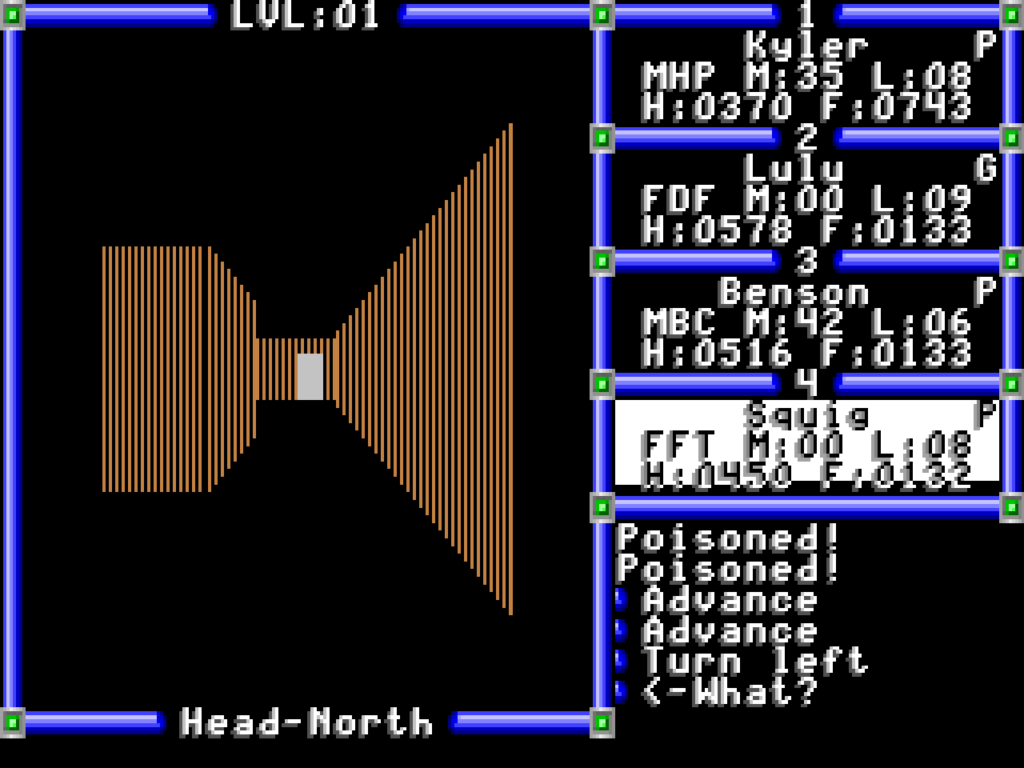 Of course, Ultima III also stays true to many of core concepts that made the series famous. Players are still able to explore the overhead world, towns and various dungeons. This time, dungeons are not randomly generated. Instead they now consist of unique, pre-designed maps. Also, in this game, dungeons actually have a larger purpose! That’s right, for the first time in the series, players will find the practice of dungeon-delving beneficial. Several of the dungeons found in Ultima III contain special items that are required to complete the game. This means that exploring them is a must, but also rather fun. (Better get that graph paper out!).

For many, myself included, Ultima III was the first game in the series that really captured their attention. Of course, the game really shows its age these days. But its impressive just how well it holds up. It’s the perfect blend of dungeon crawler and overhead CRPGs. This is the game that started it all. 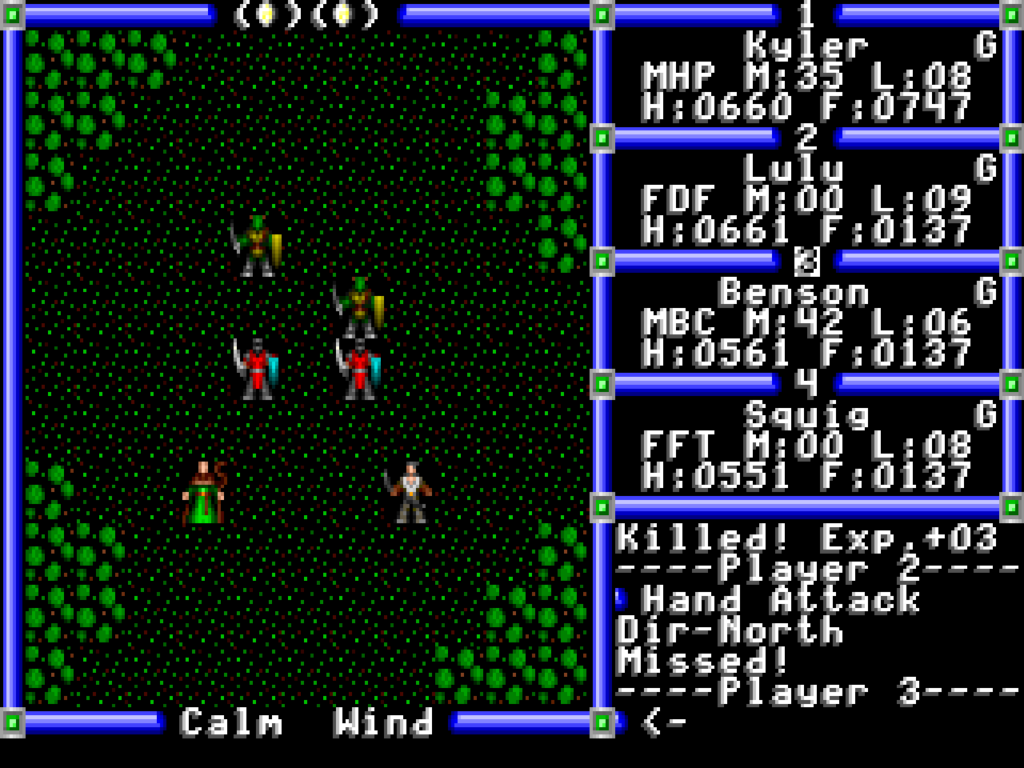 Difficulty: Medium –  Ultima III is not nearly as difficult as the prior games in the series if you’re willing to a do a little grinding. They key here is stick to overworld battles in the beginning – as they scale in difficulty with your character level. Then, once you’ve toughened up a bit, you can venture into the dungeons. As long as you’re willing to grind, you can stay ahead of the difficulty  curve.

Story: As always with the Ultima series, the storyline here is fairly well done. The big twist comes with the reveal of what “Exodus” actually is. I won’t spoil it here, but it really makes puts a nice little cherry on top of an already good game.

Originality: This game takes elements from other popular CRPGs and mixes them masterfully with the existing Ultima formula. The end result is a game that quite literally became the template for nearly all other RPGs for the next decade.

Soundtrack: As noted above, the vanilla DOS version of the game does not include audio. However, patches are available to add the midi soundtrack to the game. The game score is pretty simplistic and can get a bit repetitive at times. But, it is fitting and rather enjoyable.

Fun: For me, this is the shining jewel in the original Ultima Trilogy. It just doesn’t get any better than this. I used to enjoy experimenting with different class combinations, learning the ins-and-outs of everything. If you enjoy older RPGS, this is one that should provide hours of entertainment.

Graphics: The base graphics in the DOS version are very similar to what’s seen in Ultima I. However, there is a patch that provides enhanced graphics.  My screenshots show the game with these enhancements applied. The biggest upgrade to the game’s graphics come in the form of 3D-style dungeons. This time, instead of being black and white wireframes, the dungeon walls now features colors. I know it doesn’t sound like much, but it adds quite a bit of atmosphere.

Playcontrol: The controls for this game are very antiquated by today’s standards, but they are easy enough to figure out. You control your character with the arrow keys and execute all other commands with various letters on the keyboard. Reading the manual is a must. But even with the game manual, the new classes and abilities make for a large number of awkward commands to learn. It certainly takes a little getting used to.

Value:  Ultima III is included in the “Ultima I, II and III” bundle on GOG for a mere $5.99. This game alone is worth the six dollars.

Overall score (1-100): 90 – Ultima III is nothing short of legendary. Even if you’re not a fan of the genre, its hard not admire a game of this stature. While it doesn’t hold up quite as well today as some other titles, it still stands the test of time fairly well. If you’re interested in Ultima, but find the first two entries a little too archaic for your tastes, Ultima III might be the best starting point in the series.