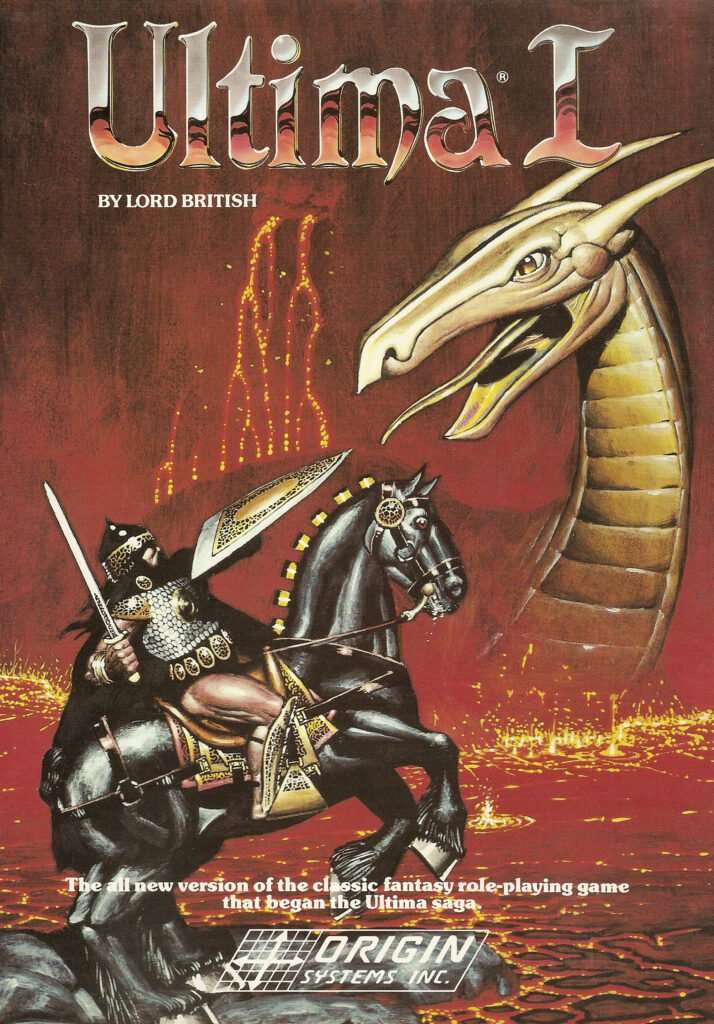 Fresh off the heels of my Akalabeth review, I’m back with a look at the first true game in the Ultima saga, Ultima – The First Age of Darkness.  This game takes many of the concepts and design elements from Akalabeth and expands on them. The result is the fruition of Richard Garriott’s original vision; a computer-based Dungeons & Dragons style role playing game.

Originally released for the Apple II in 1981, Ultima was the game that launched an entire series of RPGs that would dominate the market for nearly two decades. It was released to rave reviews and due to its popularity, was ported to a number of systems. In 1986, a remake of the game (retitled “Ultima I“) was released for the Commodore 64 and the PC. Being the only official PC version, this 1986 release is the version I played for this review. When playing this title today, the GOG version seems to work best with modern hardware. But even then, it is highly recommended that you apply the patches contained in the “Ultima Patcher“. These offer a variety of improvements to the game, while still maintaining the original vision of the developers. . 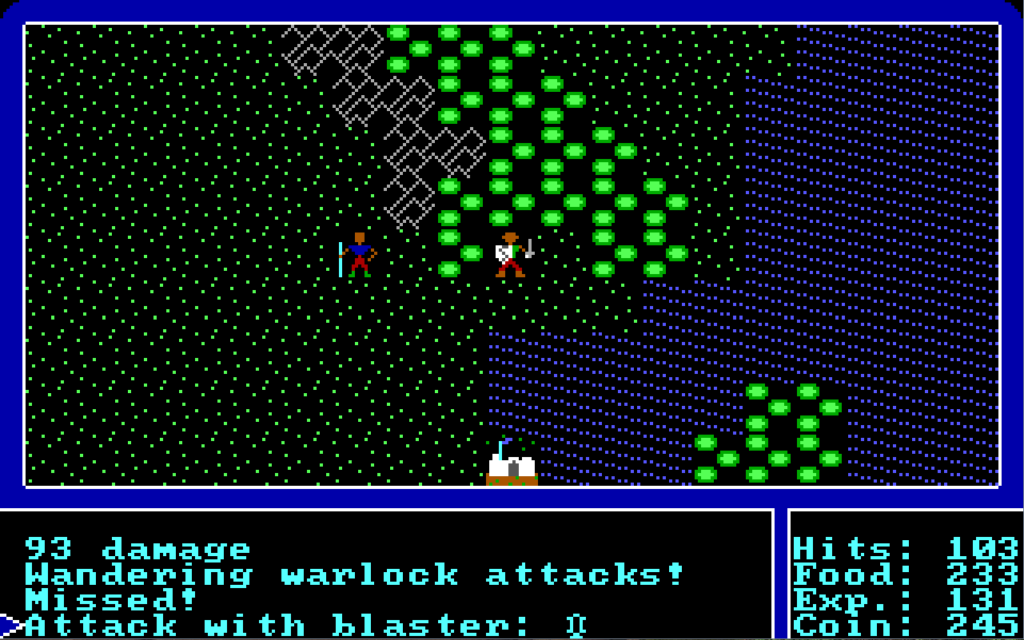 The storyline behind Ultima is both a continuation of Akalabeth and also somewhat of a re-imagining. This time, the game takes place in a world called Sosaria – a land under siege by the evil wizard Mondain. Despite many attempts to overthrow him, Mondain has plunged the world into an age of darkness. Protected by a powerful gem of immortality, he is completely invulnerable to any attacks against him. As a result of his rule, beasts and foul creatures roam the countryside causing common folk to go into hiding. The lords of the land stay cloistered behind the secure walls of their fortresses. Only one leader, a king by the name of Lord British, dares to defy Mondain’s rule. In Ultima, you play as a young hero willing to answer the call and discover a way to defeat the infamous Mondain.

As I mentioned above, Ultima takes the core concepts introduced in Akalabeth and turns them into a much better game. For example, there’s still an overworld map and dungeons. There’s still bounty-style quests. There’s still a supply of food to worry about. But this time, there’s also a bigger story and much more to explore and do. The game begins just outside of the town of Britain (the domain of Lord British). Here, Lord British tasks the player with seeking out a specific location in the game world. As the player explores the land, they will discover other kingdoms. The rulers of these other lands will also provide various quests for players to undertake. For example, to descend into various dungeons and slay specific monsters (something straight out of Akalabeth).

Completing these quests will either net the player increases in their ability scores or they will be rewarded with magical gems. The collection of these gems is crucial to the completion of the game. (But I’ll avoid any potential spoilers and say no more on that subject…) 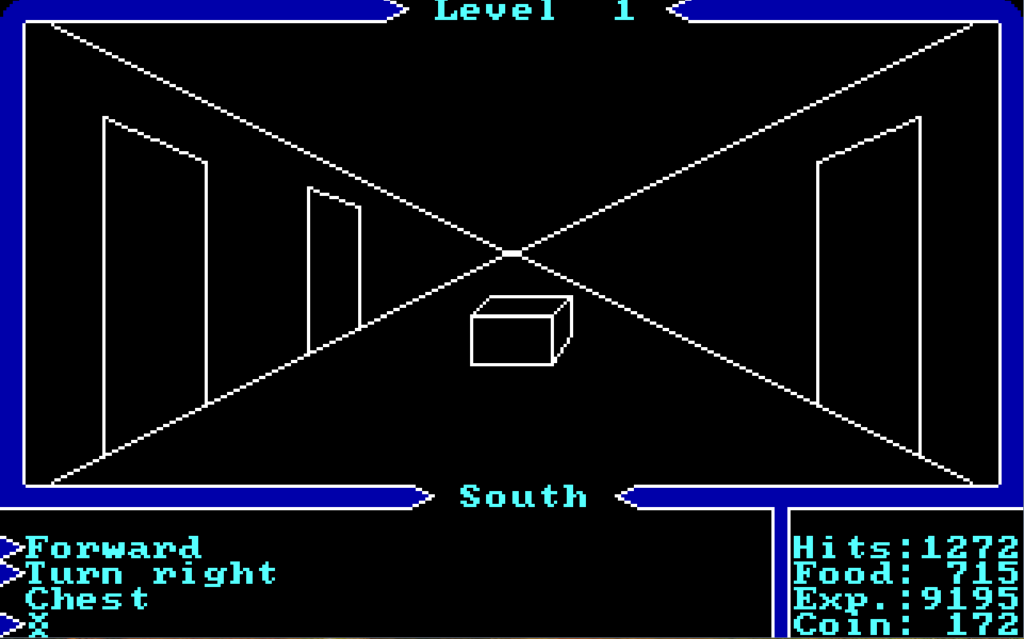 The overworld map, castles, and cities featured state-of-the-art graphics for the time. The first person dungeons are reminiscent in style to those found in Akalabeth. The main difference here is that the layout of the dungeons do not randomly generate each time the game is loaded (as they do in some versions of Akalabeth). Instead, they are static throughout the entire play session. This is true even if the game is saved and reloaded later.

Like Akalabeth, it’s very easy to exploit the game by saving before attempting risky maneuvers (like stealing from shops), then simply reloading it if things don’t go your way. It’s relatively easy to cheese your way to riches in Ultima using this method. However, to really experience all the game has to offer, I highly recommend against doing this. Starting out weak and working your way up is big part of what makes this game enjoyable. Don’t be shy! Get out that graph paper and map those dungeons! It’s fun. Trust me.

For its day and age, Ultima was a groundbreaking game. Modern players experiencing it for the very first time today will likely find it to be rather antiquated and confusing. There’s certainly no hand-holding and reading the game’s manual before play is essential. Like Wizardry, Ultima is one of the grandfathers of all modern RPGs. With that in mind, it certainly deserves a look from any real fan of the genre. 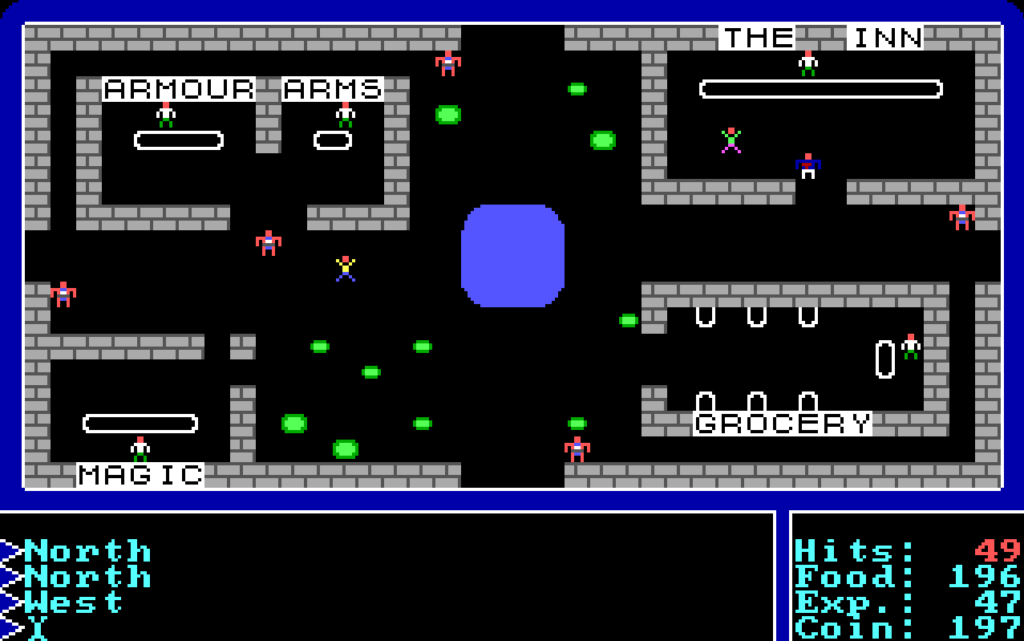 Difficulty: Hard –  Ultima features many of the same challenges found in its predecessor. However, this time there’s hints and breadcrumbs provided by NPCs. That does make finding your way in the game a bit easier. Again, this game is really only difficult if you don’t exploit the save/re-load feature. Taking advantage of this technical loophole makes the game a cinch.

Story: The game features a fairly unique story. By having the game take place in a semi-apocalyptic world ruled by an evil wizard, Ultima manages to stand out among a genre typically filled with either “save the princess” scenarios or glorified treasure hunts. It is often difficult to create a unique narrative in the fantasy game, but Garriott was able to do so by combining his love for both sci-fi and fantasy and translating them into a digital version of a pen-and-paper style RPG.

Originality: At the time Ultima was released it was simply revolutionary. Fantasy games were not unheard of, but Ultima provided gamers with a number of new and unique experiences. It’s hard to imagine this by looking at the game today, but it was truly a cutting edge release at the time. Taking a fantasy world where everyone speaks Old English and mixing it with a space shooter? That’s pretty unique.

Soundtrack: Ultima is limited to basic taps, beeps and bloops. Nothing much to get excited about, but this was par for the course in the early days.

Fun: Fans of retro-style RPGs are likely to be the only modern audience for a game like this. But for those of us that enjoy such things, Ultima can provide a surprising amount of entertainment.

Graphics: These days Ultima looks almost laughably basic. But for its day and time, Ultima was state-of-the-art. It’s certainly a massive leap above what was seen in Akalabeth.

Value:  Ultima is included in the “Ultima I, II and III” bundle on GOG for a mere $5.99. At this price, it’s worth a look even if you only have a mild curiosity about the game.

Overall score (1-100): 70 – Ultima was without a doubt a groundbreaking game. But it isn’t perfect. Despite being designed with the intention of being a rather challenging title, it’s all too easy to exploit the game mechanics and turn the entire experience into a piece of cake. Despite this flaw, Ultima is a classic that paved the way for the RPGs of today. Older fans or even younger gamers with an open mind can still find quite a bit of adventure of they are willing to take a look.