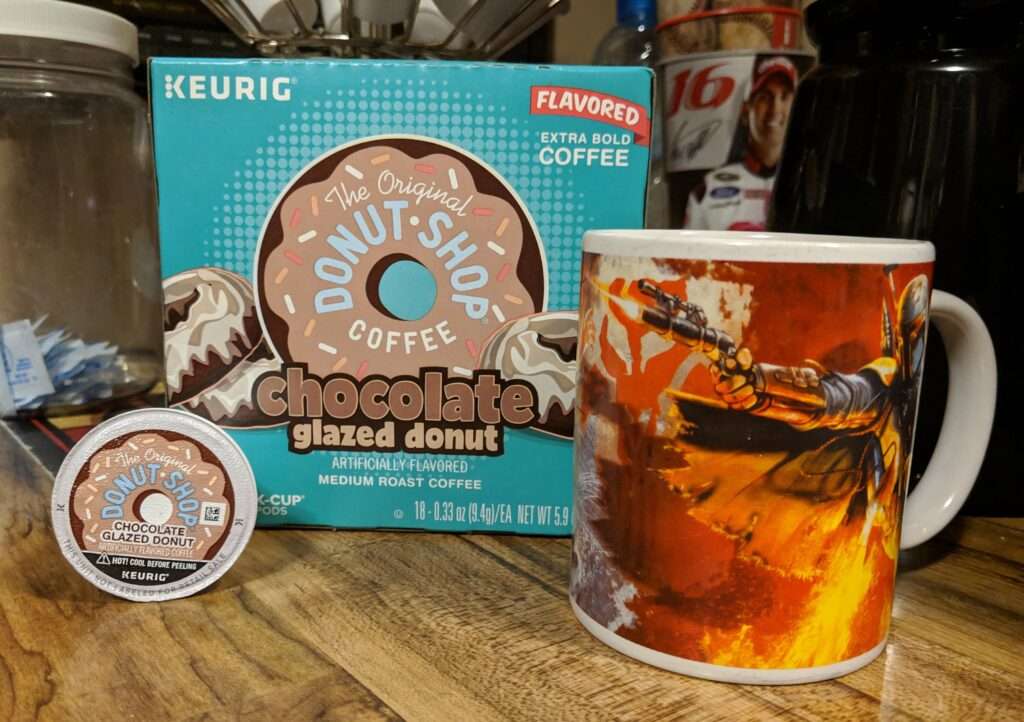 It’s been several months since I sat down and did a new coffee review. To be honest, that’s been mainly due to two reasons. First, I have a new work schedule that’s been highly unusual. Currently, I find myself waking up around three-thirty in the morning and heading to bed around eight in the evening. Second, there’s really not been anything interesting showing up on the shelves of my local grocery store lately. But recently, I noticed a new box sitting among all of the familiar faces! In fact, it was a new variety of Donut Shop; Chocolate Glazed Donut.

As you know, I’m a fairly big fan of the “Donut Shop” brand. The original Donut Shop and Donut Shop Dark are two of my personal favorites. So far, the only real miss I’ve encountered from the brand was from the “Vanilla Cream Puff” variety. To me, most flavored coffees tend to have a very phony taste. This was certainly the case with the other Chocolate Glazed Donut coffee I reviewed a couple of years ago. So needless to say, I purchased this box with the expectation that I might be disappointed.

The first thing I noticed about this coffee was the delightful aroma during the brew. It did indeed smell like the inside of a donut shop. On first taste, the coffee takes on a bit of a “chocolate syrup” sort of flavor, followed by a cocoa-like after taste. It does actually taste very much like a glazed chocolate donut. In many ways, it is very similar to Green Mountain’s “Donut House” Chocolate Glazed Donut coffee, only without the overly-strong artificial flavor.

Personally, I’ve not really a huge fan of chocolate flavored coffee. But out of all the different varieties I’ve tried, this cup was certainly the most enjoyable. So if you’re a really big fan of chocolate donuts and coffee… well, this is probably what you’re looking for.

Would Purchase again?: Maybe. Chocolate coffee is not really my forte. But, this is quality stuff. For a flavored coffee, this is a top-tier offering.