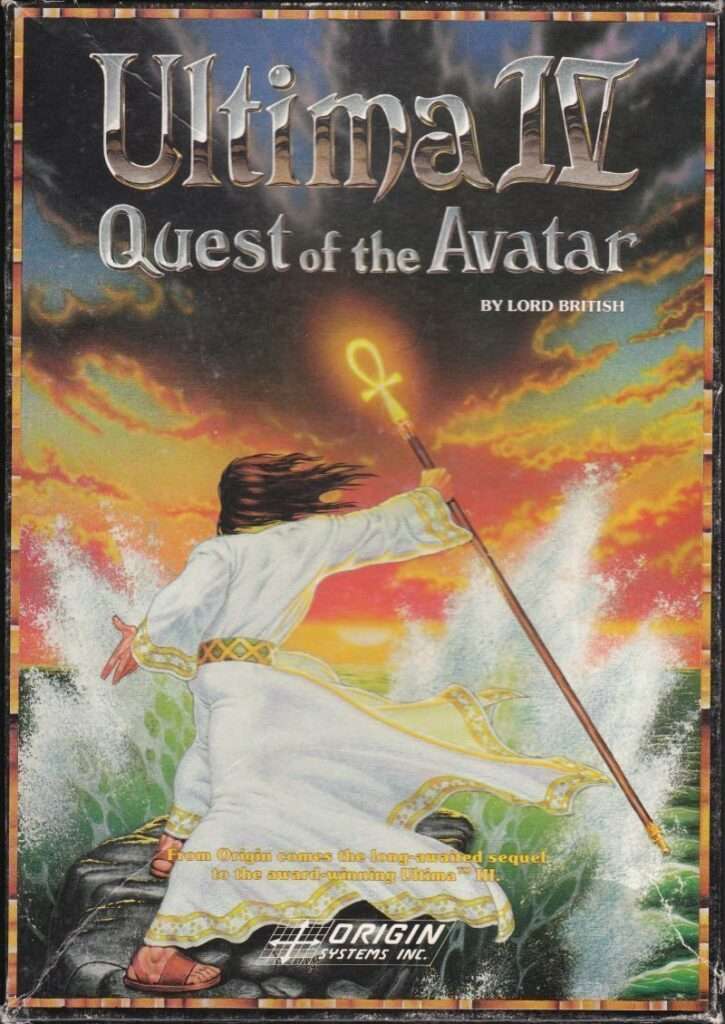 Continuing right along with my playthrough of the Ultima series, we’re brought to the fourth entry in the franchise – the heralded Quest of the Avatar. To say that this game was groundbreaking is an understatement. Just as Ultima III set the bar for CRPGs for decades to come, Ultima IV took what was now a tried and true formula and dared to push the boundary even further. For what might very well be the first time in a CRPG, the goal of the game did not revolve around defeating an evil monster or rescuing a princess. Instead, the purpose of Ultima IV is self-improvement. Simply put, to be the best person you can be.

The game is set ages after the original trilogy. After the events of Ultima III, a time of peace and enlightenment graced the world of Sosaria. Now under the gentle rule of Lord British, the world has now been renamed, Britannia. Concerned that citizens of this world might grow complacent, British created a trial of sorts. A quest to obtain the pinnacle of virtue. Whomever could manage to complete this quest would be dubbed the “Avatar” – a model citizen for all others to emulate. It is this quest that the player will undertake.

The game begins with the player answering a series of moral questions. Players are encouraged to answer these honestly, according to their own moral compass. The game then takes the answers provided by the player and assigns an appropriate starting class. 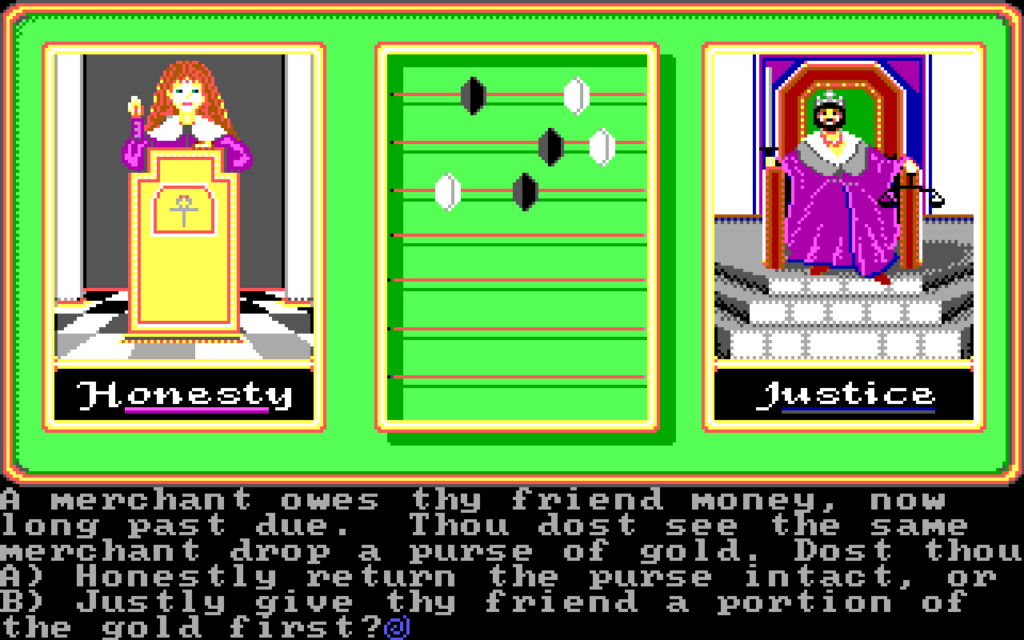 To get the most out of the game, I highly encourage that players read and answer the questions according to their own personal beliefs. Too often, people will look up guides online to try to get the starting class they want. But, Ultima IV is a game that really focuses on spiritual growth and as cheesy as it sounds, you can actually get quite a lot out of the game by following it through to completion. With this in mind, I suggest going into the game as blind as possible (especially for first-time players).

So what does all this mean? Does this imply there’s no fighting or violence in Ultima IV? No. But for the first time in the series, actions have consequences. No longer can you mindlessly steal weapons and armor from shops, or mow down weak creatures for no reason at all. You must approach the game from a standpoint of virtue. Only attack evil creatures or fight in self-defense. If an evil monster tries to flee from combat, let it run instead of stabbing it in the back, etc. By conducting yourself in a moral way, your character will continue to rise in virtue. This is the only way to complete the game.

Like Ultima III, this is a party-based RPG. But you only create a single character at the start, the rest are NPCs that are recruited along the way. As you explore the game and talk to various townspeople, you will meet the rest of your party members over time. In fact, talking to NPCs is really the key to success in this game. Without doing so, you’ll have no way of learning where to go or what to do. Taking notes is a must in Ultima IV. 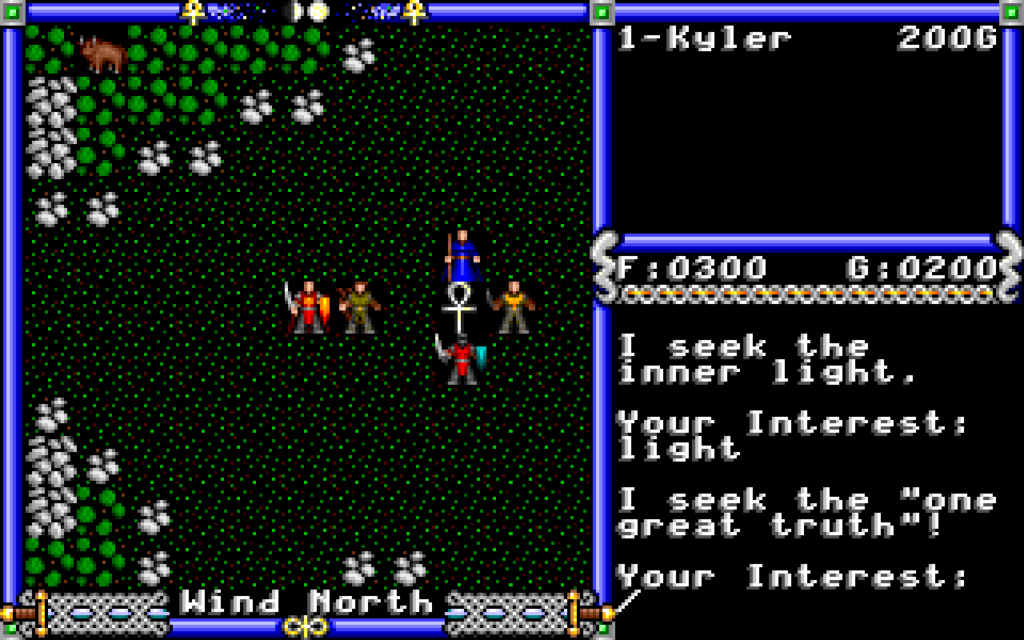 The game itself is very open-ended. Players are free to explore gameworld as they see fit. One huge difference in Ultima IV compared to other entries in series is travel. Yes, you can travel on foot and sail by ship. But one of the main modes of transportation is by “moongate”. Similar to the time gates from Ultima II, these are basically portals that appear in various locations according to the phase of the moon. Moving through a moongate will warp the player to a completely different area. Learning the locations and destinations of these moongates is also crucial to the success of the game.

Another big change to the series that was introduced in this game is the magic system. In Ultima IV, spells are cast using a variety of reagents. So players must always be sure to keep enough spell components on hand if they want to be able to use magic. Spells and the reagents needed are often learned by talking to NPCs. So again, note taking is a must for this game. This is a concept that is likely foreign to many younger gamers. But for us old grognards, this was a way of life.

Despite many of these new concepts, the rest of Ultima IV will feel familiar to fans of the series. There’s still monsters to fight, weapons and armor to buy, and dungeons to explore. But where this game shines is in its radical approach to character development and storytelling. As a result it remains my favorite entry in the original series.

When playing this title today, the GOG version seems to work best with modern hardware. But even then, it is highly recommended that you apply the patches contained in the “Ultima Patcher“. These offer a variety of improvements to the game, while still maintaining the original vision of the developers. 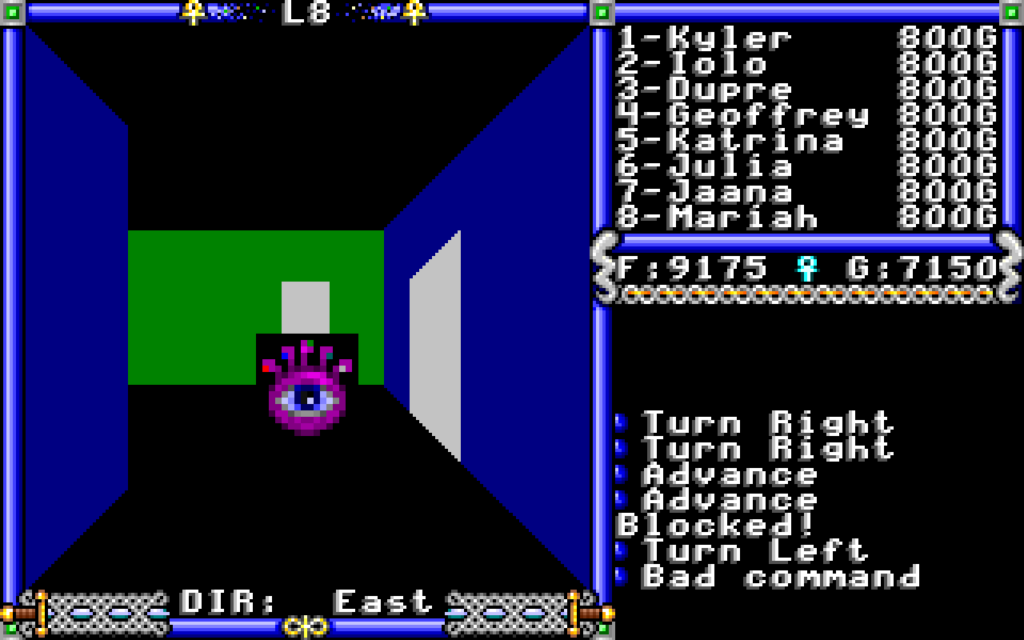 Difficulty: Hard –  When played as intended, Ultima IV is surprisingly difficult. Players will really need to think before they act, take extensive notes, and think outside of the box. Patience is required to master a game like this. That being said, if you sit down with a walkthrough the game is ridiculously easy.

Story: The storyline is the really where this game stood above all its peers. Throwing out all of the standard tropes and cliques really gave this title a unique and engaging story to enjoy.

Originality: This game is the direct result of Richard Garriott’s willingness to buck the system and do something different. Against the advice of many in the industry, he insisted on making Ultima IV a game that focuses on spiritual growth. By doing so, he created a title that will forever stand out as one of the greatest games of all time.

Soundtrack: As noted above, the vanilla DOS version of the game includes minimal audio. However, patches are available to add the midi soundtrack into the game. The game score is pretty simplistic and can get a bit repetitive at times. But, it is fitting and rather enjoyable.

Fun: If approached with a patient mindset and the willingness to learn, Ultima IV is a very rewarding and entertaining game. Younger players who are used to the hand-holding of today’s titles will likely have a tough time wrapping their mind around a title like this. But there’s a lot to love in Ultima IV if you’re willing to open your mind to it.

Graphics: The base graphics in the DOS version are very similar to what’s seen in Ultima Trilogy. However, there is a patch that provides enhanced VGA graphics.  My screenshots show the game with these enhancements applied. Patched tiles aside, the biggest change to the game’s graphics come in the form of opening and closing artwork. Even though it appears simply by today’s standards, the full color scenes that are displayed at the beginning of the game were absolutely cutting edge at the time.

Playcontrol: The controls for this game are very antiquated by today’s standards, but they are easy enough to figure out. You control your character with the arrow keys and execute all other commands with various letters on the keyboard. Reading the manual is a must. But even with the game manual, there’s a large number of awkward commands to learn. It certainly takes a little getting used to.

Value:  You’d think that a game as legendary at Ultima IV might still command a premium price. But, you’d be wrong. In fact, Ultima IV is available free of charge to everyone. The easiest way to get your hands on it is through GOG, but it is also available elsewhere online at no charge. With this in mind, there’s no reason not to give this classic game a try.

Overall score (1-100): 100 – Ultima IV is the Ultima game to play. This game was revolutionary in a way that’s hard to explain today. There was simply nothing like it. This game captivated me when I was young and I daresay it actually helped make me into a better person. I recommend this game to anyone who is looking for something different and willing to take the time and patience to master it.