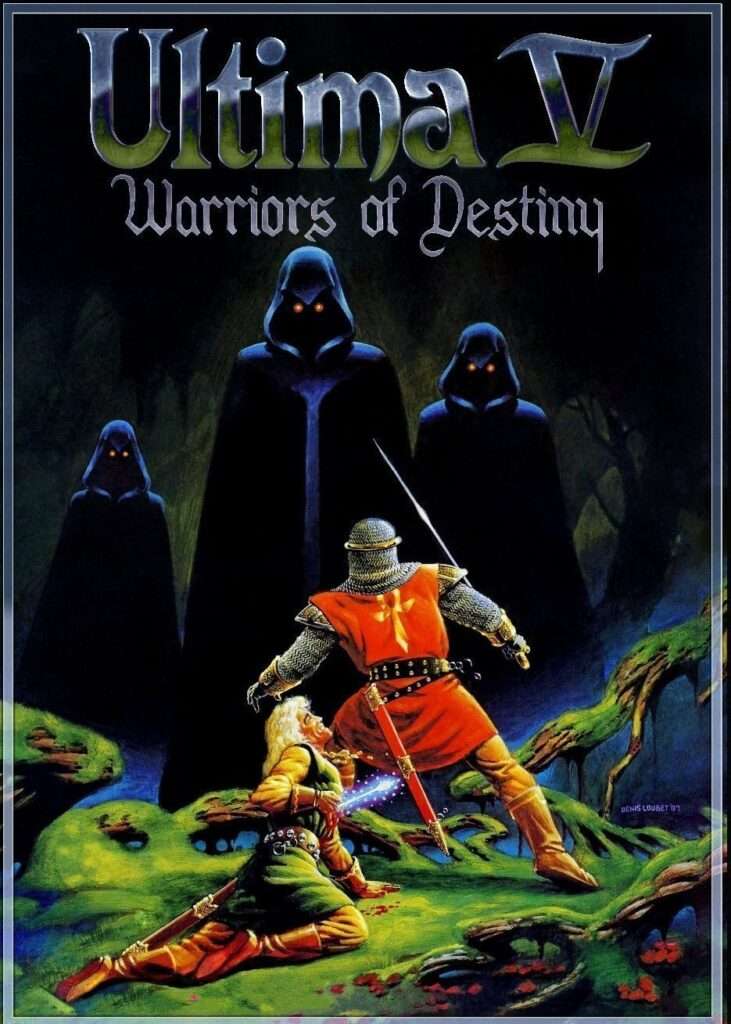 Next on the list of Ultima titles is one of the most underrated entries in the series; Ultima V – The Warriors of Destiny. This is a game that often gets overshadowed by its predecessor. But in my opinion, it is worthy of just as much attention. This title takes all of the advancements that made Ultima IV such an enthralling game and continues the trend, evolving the genre even more.

In this game, the Avatar is summoned back to Britannia by several of his old companions. Some time after the events of the last game, Lord British has gone missing. In his absence, Britannia has come under the control of the nefarious Lord Blackthorn, a tyrannical ruler who has twisted and corrupted the eight virtues into rules of terror. He enforces his version of the virtues with the help of some mysterious beings called “The Shadowlords”. It is up to the Avatar to unravel the secrets behind Blackthorn’s rise to power, discover the whereabouts of Lord British, and bring Blackthorn’s rule to an end.

This entry of the series also marks the first time players can carry over their progress from a previous game. That’s right, if you’ve managed to complete Ultima IV, you can import your character into this new chapter. Doing so will grant you a bit of a boost, giving a small reward to loyal fans. (I should note that enabling this functionality can be a bit tricky with modern versions of the game due to the way DOS Box is configured by default. But it’s still manageable – more on this later). 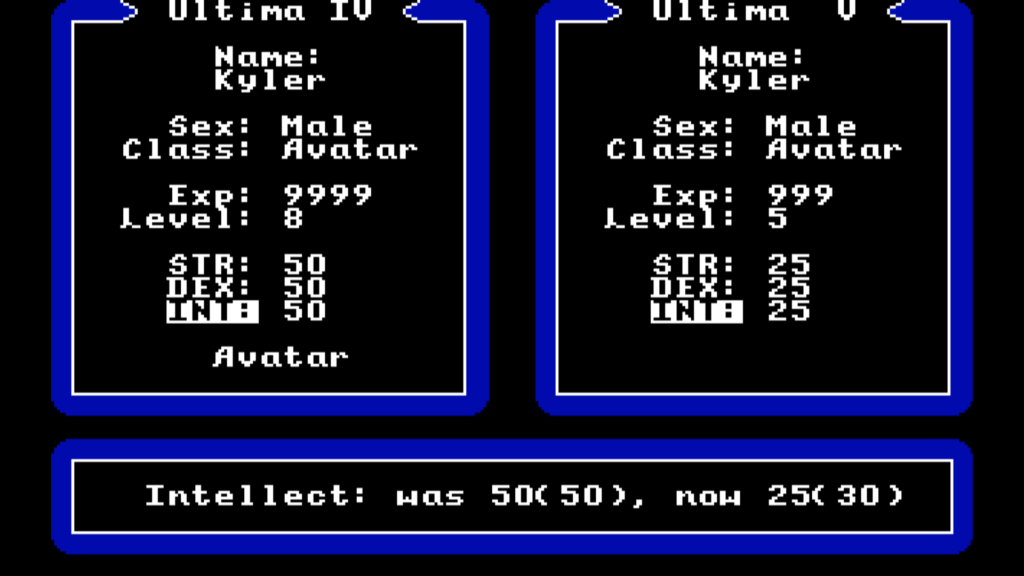 As I mentioned above, this game takes much of what made Ultima IV great and improves on it ever so slightly. For example, there is now more interactivity with both NPCs and the environment, more commands at the players disposal (ie: search, push, jimmy, etc). Also, the game now incorporates an active clock. This means that time passes in Britannia as the game progresses. As a result, NPCs “live out their lives” according to the time of day. This adds a whole new dynamic for the the player to consider when exploring and gathering information. For example, some NPCs may only be available during certain times of the day.

The Shadowlords mentioned above also play an integral part in the game. They will appear at various times, often changing the behavior of nearby NPCs.  Learning their schedule and how to determine their whereabouts becomes important at later stages of the game.

All of these tweaks and advances help transform the world of Ultima V into a living, breathing place. This, combined with what might be the best storytelling in the series thus far, really make this game one of the more engaging entries in the franchise. I don’t say that lightly. On more than one occasion, I found myself in awe of what I was experiencing. This was true the very first time I played the game years ago, as well as with my recent playthrough for this review. Some parts of the game’s storyline were so far ahead of its time that it is literally jaw-dropping. 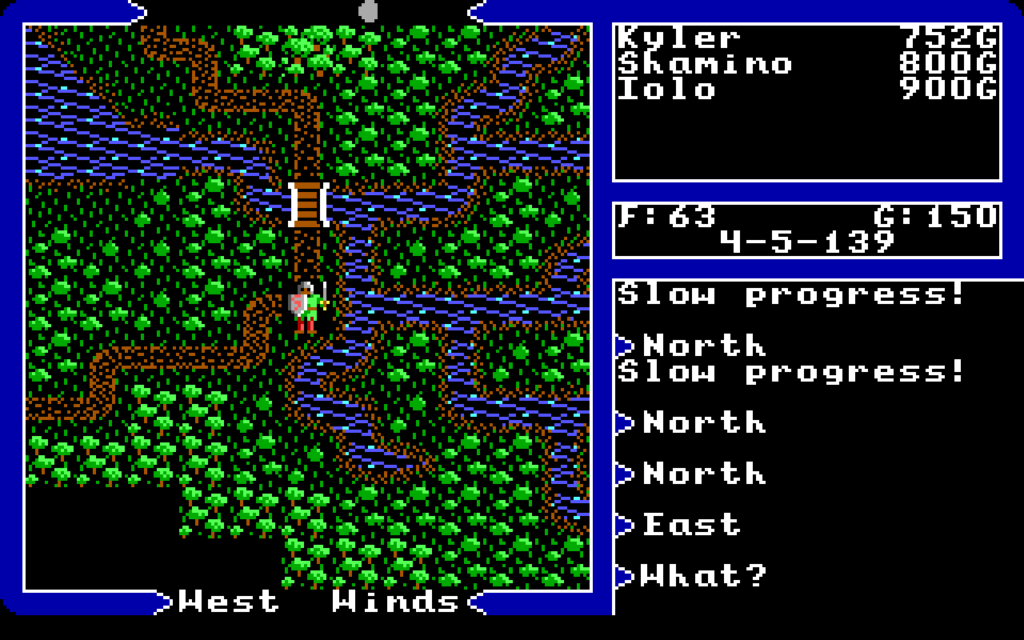 On the technical side of things, Ultima V also brings a graphical boost to the franchise. But oddly enough, the DOS version is still absent a proper soundtrack. Thankfully, the fan community rectified this with an unofficial patch. As mentioned in my previous Ultima reviews, the “Ultima Patcher“ restores the MIDI soundtrack found in other versions of game. It also contains optional fixes for bugs that were never corrected by the game developers. Plus, this patch was designed specifically with the GOG version of the game in mind. This means that is provides an easy solution for importing your previous Ultima IV file.

All in all, Ultima V is a great evolution in an already legendary series. But, for all its advancements, the interface still stays stubbornly rooted in what has come before.  The alphabet-soup control scheme is starting to feel even more cumbersome with the addition of so many new commands. But, in the grand scheme of things, this complaint does little to detract from just how good this game actually is.

When it comes to classic CRPGs, I hold Ultima V is just as high esteem as the legendary Ultima IV. 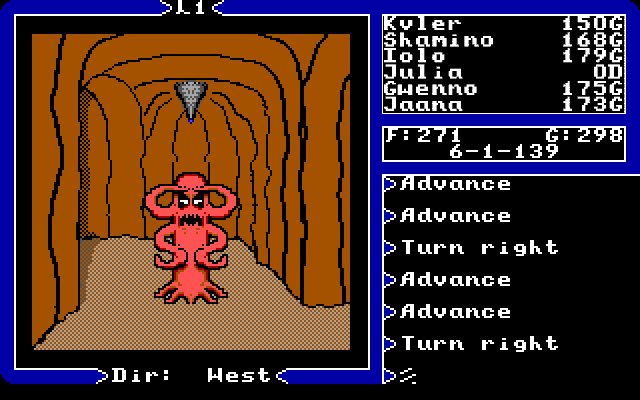 Difficulty: Hard –  Out of the entire series so far, I’d say Ultima V is by far the most difficult title. This is especially true in the early part of the game. Players who import their character will have a slightly easier time, but the challenge still remains. Taking notes and drawing maps is a must. Even then, the game can throw some pretty mean curveballs.

Story: Again, the storyline is where this game shines. I really like the direction Richard Garriott decided to take with this title. The concept of someone corrupting Lord British’s virtues and perverting them for their own gain is both original and exciting. Players who enjoyed the earlier titles in the series will also find some nice ties to the original trilogy (but I’ll say no more or risk spoiling it).

Originality: By this point, the Ultima series has settled into a time-tested formula. Yes, there have been advancements made to the game. But, we’re starting tread into territory that feels familiar. So far, this is not really a big complaint. But it wouldn’t take much for things to start to feel a little tired.

Soundtrack: As noted above, the vanilla DOS version of the game includes minimal audio. However, patches are available to add the midi soundtrack into the game. The game score is pretty simplistic and can get a bit repetitive at times. But, it is fitting and rather enjoyable.

Fun: For gamers who are not used to old-school CRPGs, Ultima V will likely be a tough pill to swallow. But, for those of us who absolutely love the genre, Ultima V is one of the finest examples of a game done well.

Graphics: A step up from prior entries in the series. The game looks ancient when compared with modern offerings – but in its day and time the graphics were bleeding edge.

Playcontrol: The controls for this game are very antiquated by today’s standards, but they are easy enough to figure out. You control your character with the arrow keys and execute all other commands with various letters on the keyboard. Reading the manual is a must. But even with the game manual, there’s a large number of commands to learn. It certainly takes a little getting used to.

Value:  Ultima V is available on GOG as part of the “Ultima IV, V and VI” trilogy. The entire bundle is available for the low price of $5.99. For this price, three games of this caliber is an absolute steal.

Overall score (1-100): 90 – Ultima V is one of my favorite entries in the series. Like its predecessor, I consider it to be a classic that belongs in the library of any serious CRPG fan. To me, this game defines the classic old-school role playing game experience.