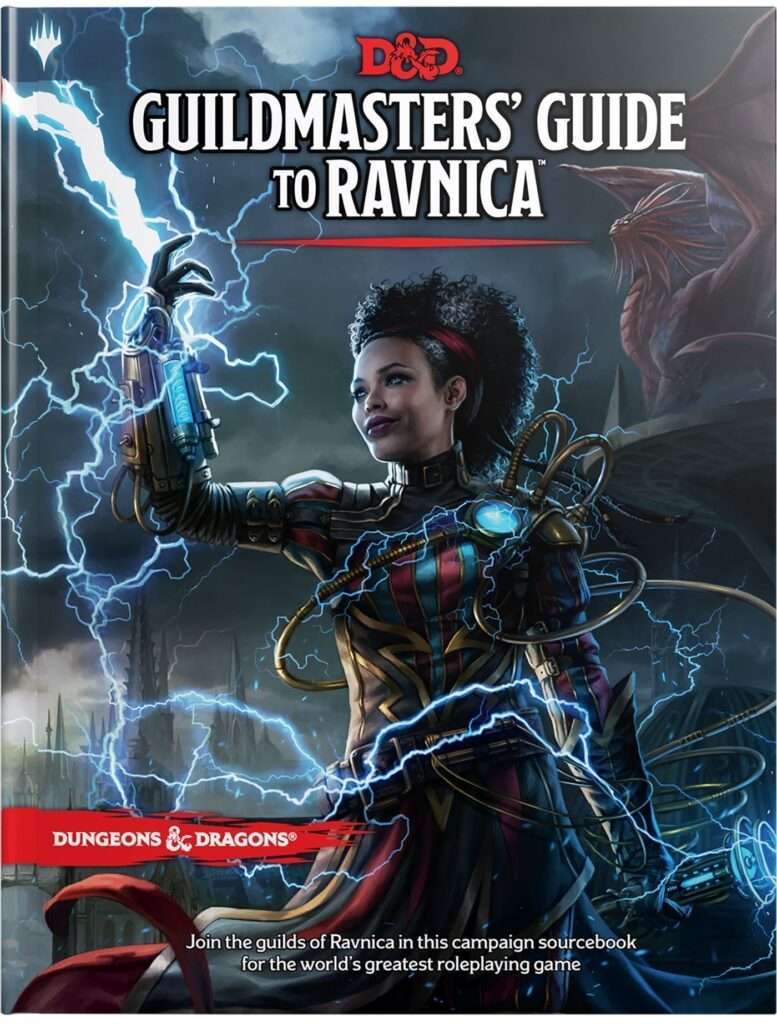 Ever since Wizards of the Coast purchased D&D back in 1999, I’ve often wondered if they would ever consider merging it with their flagship trading card game Magic the Gathering. Well, it took almost twenty years, but with the release of the Guildmasters’ Guide to Ravnica, it has finally happened. That’s right, the lore-rich world of Ravnica is now an official D&D campaign setting. I will admit that while I’m glad to see 5E expand beyond the Forgotten Realms, Ravnica was not exactly what I was hoping for. – Regardless, let’s see where this book takes us.

As you might assume, this is essentially a sourcebook for anyone interested in playing a game set in the world of Ravnica. In case you are unaware, Ravnica is an enchanted city that encompasses the surface of an entire world. Prior to this, it existed only in the lore of the Magic the Gathering universe. The book provides a summary of Ravnica, it’s denizens, currency, guilds, political structure, etc. Due to the massive size for the world itself, the book focuses largely on an area called The Tenth District. This zone is more than large enough to keep players busy for years to come.

A large part of this book details the ten guilds that each strive for dominance in Ravnica. Players creating a character in this world are urged to affiliate with one of these organizations. The book does a great job at helping players choose a guild that suits their playing style and even provides some tips for role playing, etc. For DMs that decide not run a game set in the world of Ravnica itself, it’s still possible to incorporate these guilds into a homebrew campaign if they so choose.

One of the main selling points for this book is the introduction of new playable races; Centaurs, Goblins, Loxodons, Minotaurs, Simic Hybrids and Vedalken. Naturally, several of these races are either exclusive to Ravnica or unique variants of traditional creatures. But, crafty DMs are always able to draw inspiration for their own games using the information found here. This book also offers two new sub-classes that, despite being very Ravnica-specific, could also be adapted to other campaign worlds with a little effort. Aside from the information detailed above, this book also contains a trove of new magical items and monsters.

To me, the majority of the information found in this book is really only useful for DMs and players that actually intend to run a campaign set in this world. Sure, some of the monsters from the bestiary can be plucked out and used elsewhere. But everything else seems tied to campaign setting itself. With this in mind, if you’re a fan of MTG and D&D, this is the moment you’ve been waiting for. There’s more than enough information in this book to get yourself started. If not, this might be one supplement worth skipping.