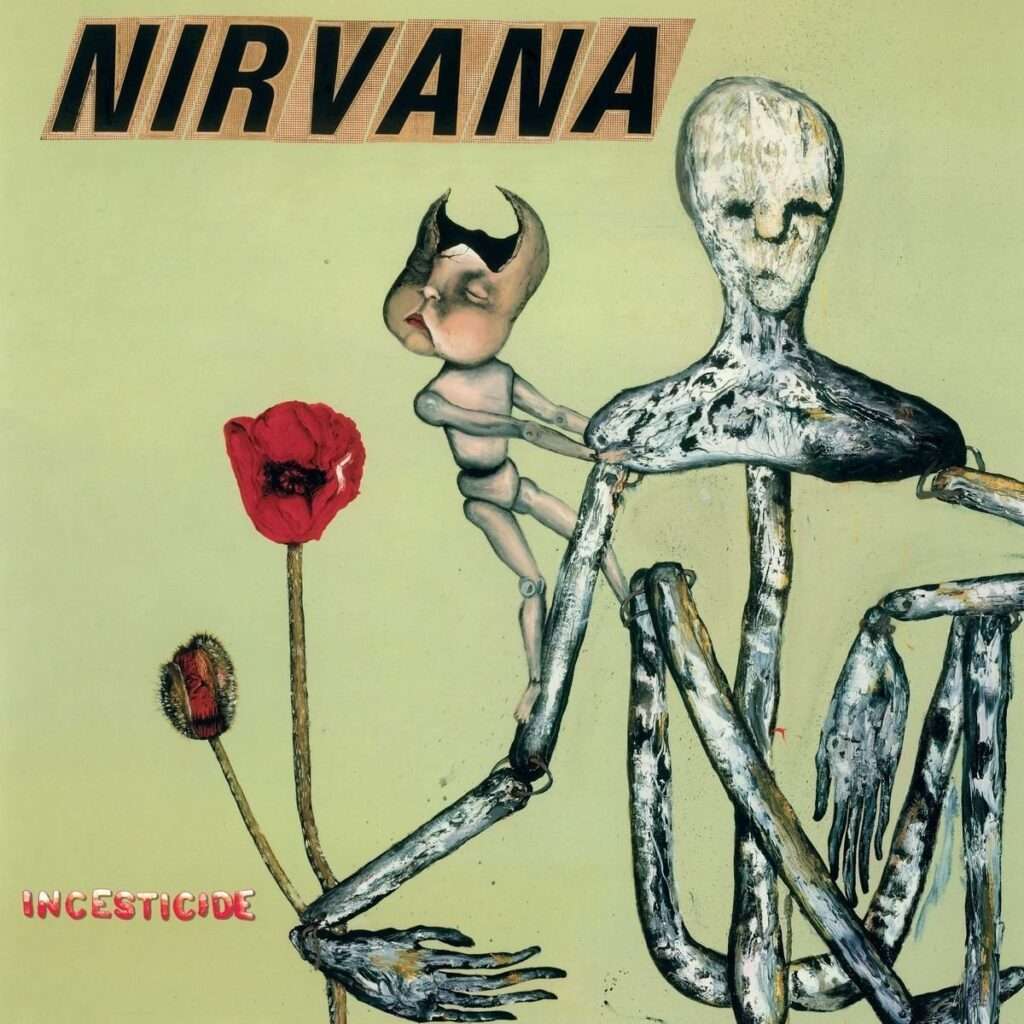 As some readers to this blog may know, when I was young I was a musician. One of my goals with these “Record Shop” posts is to share the music that served as a source of inspiration for me back when I was learning how to master the guitar. A quick read through some of these entries will undoubtedly reveal Nirvana as one of my major influences. While it’s true, I idolized Kurt Cobain and his songs, one of the main reasons I found Nirvana to be so influential wasn’t because he was some “genius songwriter”. But is it because his music was especially easy to play. Even with only a few months of guitar lessons under my belt, I was able to pick up a guitar and play along with the majority of Nirvana’s songs.

One of my favorite Nirvana albums was actually also their most obscure. I’m talking about Incesticide. This album was released shortly after Nevermind and is actually a compilation of non-album tracks, b-sides, and other rarities. To me, it really showcases a very interesting side of Nirvana. The songs included on this record range from polished pop-rock songs to grimy noise  – I absolutely love this collection. So, let’s jump right into it:

1: Dive – The album starts with this grooving rock track that was originally included as a B-Side for the Sliver single. This song embodies just about everything that I really loved about Nirvana. A driving bass line, grungy guitars, and Cobain’s guttural vocals. If I had to pick a song to serve as the perfect example of Nirvana’s sound, this might just be the one.

2: Sliver – Next up is A-Side to the previous track. The Sliver single was released by Sub-Pop Records during the period between the release of Nirvana’s first album Bleach and their blockbuster hit Nevermind. “Sliver” is a pop song (something that was rare for Nirvana at the time), but it’s one that still manages to maintain that unique feel that only Nirvana could provide.

3: Stain – This is an older track from the Bleach era. It originally appeared on Blew (an EP released shortly after Bleach). As such, it has the same kind of vibe that many of Nirvana early songs provide. It is gritty and dirty sounding. If you’re a fan of Bleach, this is a track will really put a smile on your face.

4: Been a Son – This song was also originally released on the Blew EP. However, the version included on this record is a newer recording. Like “Sliver”, this another fine example of Cobain’s pop-song prowess. It’s a quirky, catchy tune. A fan favorite.

5:  Turnaround – Here we have a cover of a rather obscure Devo song. The interesting thing about this tune for me is just how faithful it is to the original in a number of ways. (Despite being played on guitars instead of synthesizers). Admittedly, one of the weaker tracks on the album, but still very well done.

6: Molly’s Lips – Another cover song – this time by one of Cobain’s favorite indie groups; The Vaselines. The original song had a very lo-fi, new wave sound to it. Nirvana’s version is much harder and driving. This is a very simple song, but one that I’ve grown to love. One of the highlights of the album.

7: Son of a Gun – Another Vaselines song. Admittedly, I had never heard of The Vaselines until I was introduced to their music through this album. Both songs are very catchy and surprisingly pop-ish. Of the two, this is my least favorite. But it’s still a pretty solid track.

8: (New Wave) Polly – Here we have an alternate version of “Polly” from the Nevermind album. This version features the full band and a much faster tempo. It’s a fun listen, but I very much prefer the original version.

9: Beeswax – This is an obscure track that was originally released on the Kill Rock Stars compilation album; a record showcasing talent from the Seattle area. This is a weird, sloppy, grungy sounding track. Cobain’s vocals are screeching and almost indecipherable at times. But it really embodies the raw energy that I found so fascinating about Nirvana. I love tracks like this.

10: Downer – This song was included as a bonus track on the CD version of Nirvana’s first album Bleach. It was included on this collection as well. To be honest, “Downer” is one my least favorite Nirvana tracks but I understand its inclusion.

11: Mexican Seafood – This is another compilation track. It’s originally from a very obscure record called Teriyaki Asthma; a collection featuring tracks produced by Jack Endino. This is one of Nirvana’s earliest recordings. Like “Beeswax”, it’s very loose and gritty – an example of my favorite type of Nirvana.

12: Hairspray Queen – This track is also one of Nirvana’s very first recordings ever, but until Incesticide, it was previously unreleased. This song is a hot mess – but I love it. The vocals are all over the place. The bass line is lazy and funky. The guitar jumps from solid rock to mindless noise – it’s beautiful chaos. This is a not a song for casual fans. But I absolutely love it. One of the beast tracks on the album for me.

13: Aero Zeppelin – Another early track that was finally seeing the light of day. The whole concept behind that song is based on the fact the main riff sounds like something off of an Aerosmith or Led Zeppelin album. It’s a bit of a tongue-in-cheek track. A decent tune, but one of the low points for the record.

14: Big Long Now – This is an outtake from Bleach. As such, it very much sounds like it belongs on that record. It’s a slow, atmospheric track. But one that doesn’t really shine when put against some of the other tracks on this collection.

15: Aneurysm – The original version of this song can be found on the Hormoaning EP that accompanied Nevermind. This version of the track is a bit faster and a little more polished. To me, this track along with Dive are the highlights of the album. Nirvana at their finest.

While this album is available on streaming services like Spotify and Apple Music, it suffers from an unusual dilemma. Some of the tracks on this collection are still owned by Sub Pop records. As a result, there is no streaming license on most platforms. This means when streaming Incesticide, a number of tracks will not be available. In some cases, this doesn’t stop at streaming. A few digital music stores even exclude these tracks from purchases. With this in mind, Insecticide is still best experienced on Compact Disc.

When listening to albums, I always suggest enjoying them on a nice Hi-Fi stereo system, or on a portable device with a good pair of headphones. Being a compilation, the order of the tracks is not really that important. But I find the record to be balanced pretty well in its structure.