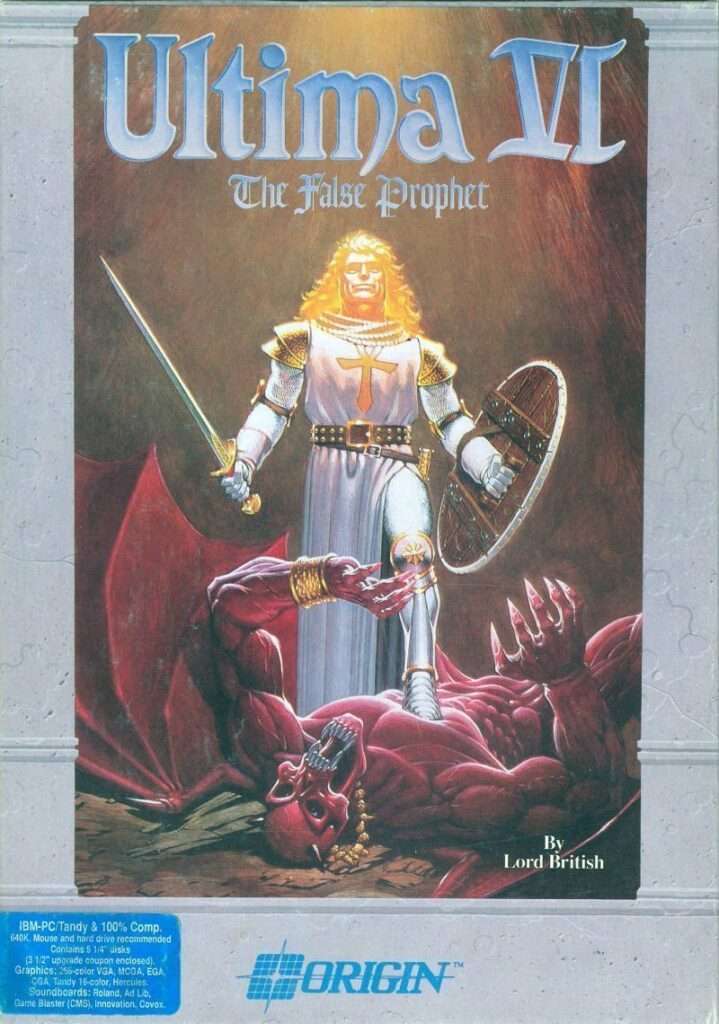 My review of the final chapter in the second Ultima trilogy is finally here! Yes, it took a bit longer than initially expected. But I’m proud to finally share my thoughts on Ultima VI: The False Prophet. As mentioned above, this game serves as the final entry in what is often known as the “Age of Enlightenment Trilogy” (the sub-series that began with the classic Ultima IV: Quest of the Avatar.)

So far, every entry in the Ultima series has always managed to showcase some of the most cutting-edge technology of its day. The same is true for Ultima VI. But this time, we actually see the biggest advancement in the series so far. This is largely due to the fact that Ultima VI was developed specifically for the PC. All other games in the franchise were first developed for Apple and then ported to other platforms. The end result of this decision is a title that features full VGA graphics, a native MIDI soundtrack (for PCs equipped with soundcards), and even a revamped UI -Complete with mouse support! Like Ultima V, this entry also allows players to import their character from the previous scenario.

Back in the day, only the very best PC would be able to experience Ultima VI in all of its glory. At the time of Ultima VI‘s release, sound cards were not standard issue in PCs. So a vast number of players never got experience the game’s soundtrack . Thankfully, players today are able to experience the game as originally intended if acquiring a copy from GOG. As always, GOG does a great job of configuring DOS Box emulation so that the game is delivered almost flawlessly. 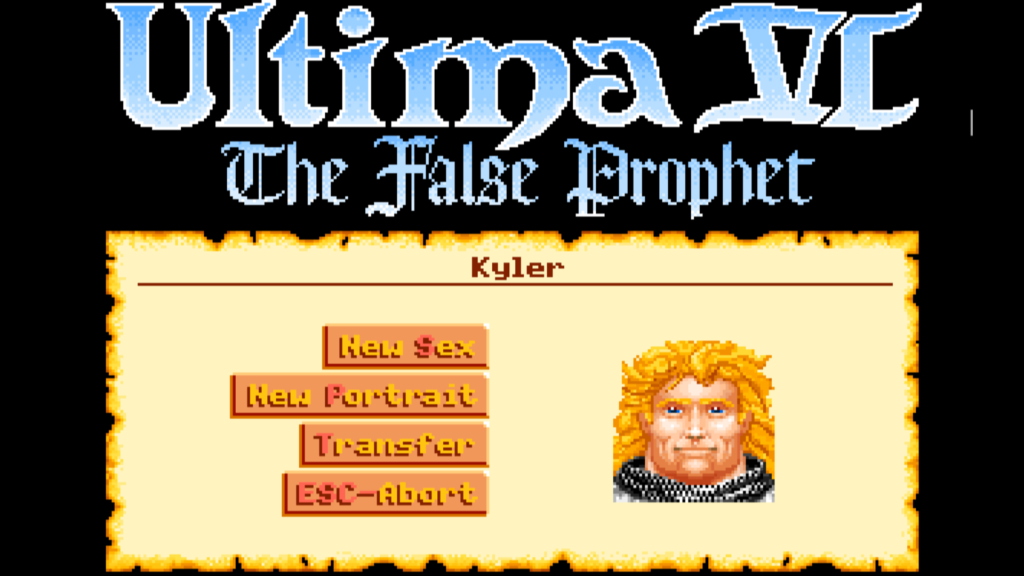 This game takes place several years after the events of Ultima V. Once again, players assume the role of The Avatar – a man from Earth who found his destiny in another world known as Britannia. Typically, The Avatar travels to Britannia using a magical blue-colored portal that appears not far from his home. However, one night during a mysterious storm, lighting strikes the site where the portal appears. The Avatar ventures to the scene to investigate and finds an unusual red-colored portal waiting for him. Upon emerging on the other side, The Avatar is accosted by a band of monstrous gargoyle-like creatures. Just as he about to meet his doom, he is rescued by companions from the previous Ultima games and take refuge in Castle Britannia.

The Avatar learns that the Gargoyles have only recently appeared in Britannia. In the short time since their arrival, they have captured several of the world’s Shrines of Virtue. The Avatar is tasked by Lord British to determine the reason behind the invasion and to help restore order to Britannia. Over the course of the game, they player will learn the truth behind the gargoyle’s presence and discover that not everything is as it seems.

As you can see, Ultima VI continued the series’ trend of excellent storytelling. As usual, this game takes what seems to be a black and white scenario and surprises the player with a level of insight and morality that simply just wasn’t seen in games at the time. 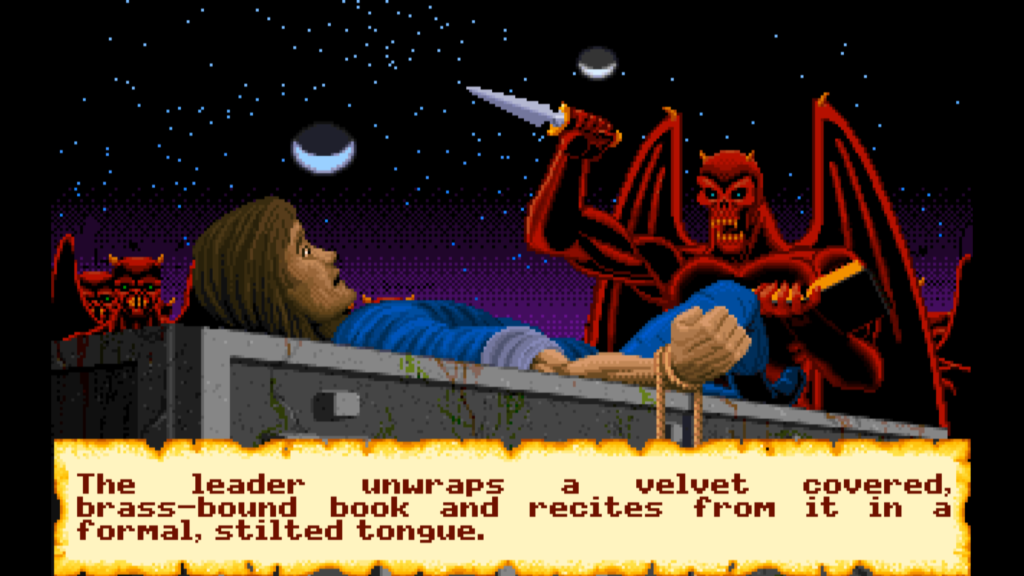 As I mentioned earlier, this game showcases a huge advancement in technology when compared with its predecessor. We now have a game world that is virtually seamless and maintains a constant scale. That’s right, no more zoomed-out overworld map. No more first-person dungeons. Everything is now presented in a colorfully rendered birds-eye view. But the enhancements are not just visual. There’s a number of revamps that make this Ultima much easier to play and control. For example, managing equipment has never been easier. Items possessed by characters now appear visually and can be clicked on and manipulated. This is important because for the first time in the series, we also have a new crafting option. Items can be combined and merged to create new, different items. Being able to do this via a point-and-click UI is a must. But that’s not all. Even talking to NPCs has been enhanced – there’s now an animated headshot of the character you are interacting with and keywords in the conversation are now highlighted and clickable. All of this may sound basic these days. But at the time, these were some really revolutionary advancements.

Since the game can now be controlled via mouse, the UI has evolved to accommodate this change. A panel of action buttons appears across the bottom of the screen. These allow players to execute any number of commands; such as drawing their weapon, picking up objects, inspecting objects, etc. Of course, players can still use the keyboard if they choose – and in fact will need to do so occasionally when talking to NPCs. But no longer will players have to memorize a slew of hotkeys and commands. This, in my opinion, is the best thing that could have happened to the Ultima series.

Like some of the previous games in the series, Ultima VI is largely an open world game. But this time, the level of “openness” is taken to a whole new level. Now, players can pretty much venture anywhere they see fit and experience the game at their own leisure. This is a good thing because Ultima VI is beast of a game. Being open-world makes it much easier to tackle a game of this size without it feeling like an endless grind.

All of these changes really make Ultima VI shine. Plus, it paves the way for what’s about to come down the pike with later installments. 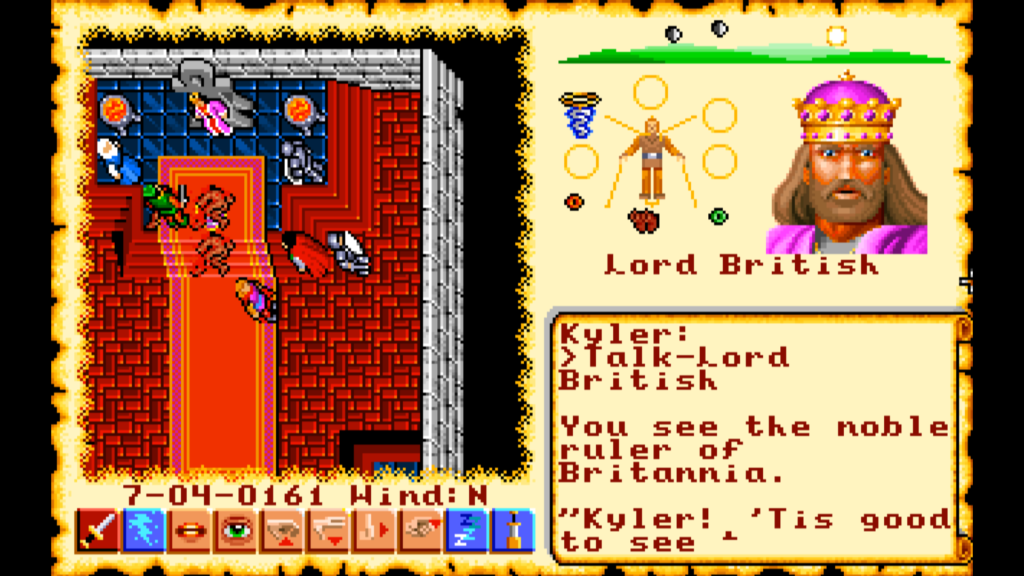 Difficulty: Medium –  I’ve heard it said that Ultima VI is one of the harder titles in the series. Personally, I don’t find this to be the case. To me, it seemed much easier than most. For example, one of the features in the game is being able to travel around via a magical item called the Orb of the Moons. With this item, its very easy to simply travel to Lord British’s castle for healing pretty much whenever needed. Plus, the game itself just seems to be much more forgiving overall.

Story: The storyline is again one of the best parts of the game. The introduction scenes are masterpieces and it only gets better from there.

Originality: Just when the series was starting to feel a little stale, the developers stepped up and provide an entirely new experience. Everything from the UI to the overall feel of the game is new and improved.

Soundtrack: Ultima VI has a basic midi soundtrack. As such, the quality can vary depending on how your sound card handles MIDI playback. Regardless, the music is catchy and timeless.

Fun: For CRPG lovers, it doesn’t get any better than this. This game has it all: classic RPG elements, engaging gameplay, an open world – you name it. If that’s your cup of tea, Ultima VI is one heck of a ride.

Graphics: Ultima VI marks a drastic upgrade in terms of graphics. Of course, the game looks pretty rough by today’s standards. But when compared to what came before, its easy to see just how far the developers came in such a short time.

Playcontrol: For the first time in the series we now have a point-and-click UI. This makes controlling the game much more intuitive. Unfortunately, the default emulation of DOS Box does seem to introduce a little bit of lag to the mouse on modern systems. This isn’t terrible, but it does take a little getting used to.

Value:  Ultima VI is available on GOG as part of the “Ultima IV, V and VI” trilogy. The entire bundle is available for the low price of $5.99. For this price, three games of this caliber is an absolute steal.

Overall score (1-100): 95 – Ultima VI is again, one of my favorite entries in the series. It was released in a time when CRPGs were reaching their golden age and it shows. Ultima VI takes everything that made the series great and blended it with a number of new ideas and design changes that really put it in a class of its own.