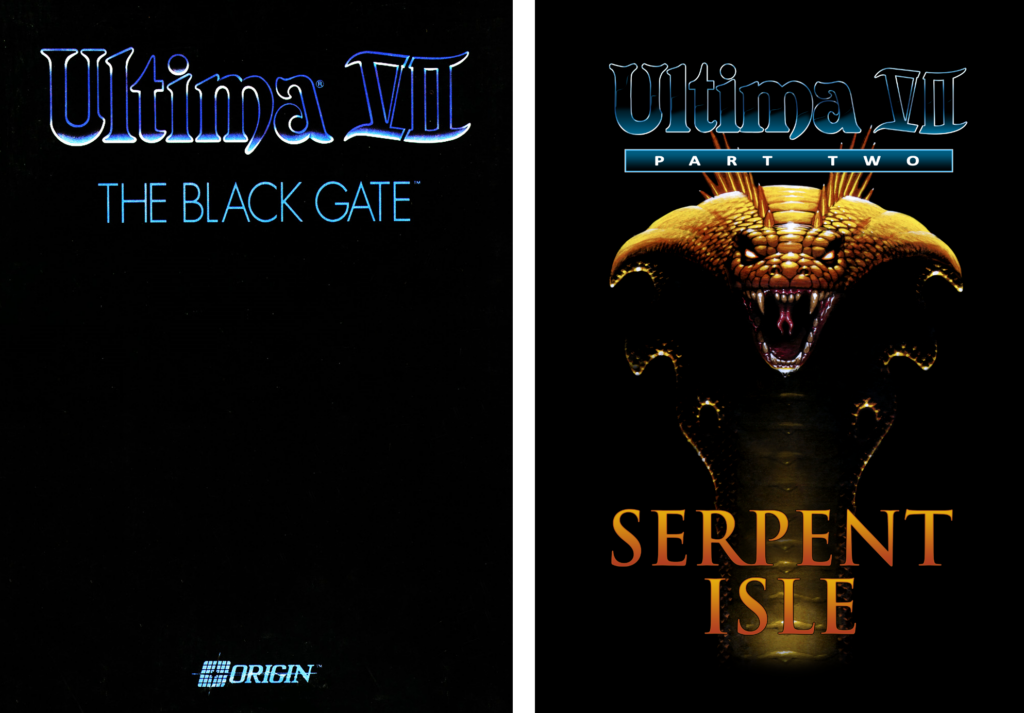 My Ultima series playthrough continues with a review of Ultima VII: The Complete Collection. This bundle consists of the following titles: Ultima VII: The Black Gate (and it’s expansion The Forge of Virtue) and its direct sequel Ultima VII: Part Two – Serpent Isle (and yes, its expansion; The Silver Seed).  That’s a whole lot of gaming! In fact, it took me nearly a month to complete these two titles (and that was with me clocking in every single hour of free time at my disposal). There’s a lot to digest here, so let’s begin with a plot summary.

Ultima VII – The Black Gate: Like most of the games in the series, the player assumes the role of The Avatar. The game begins several years after the events of Ultima VI. One day, The Avatar is minding his own business on Earth, playing a game on his personal computer when he receives a message from a mysterious being who identifies himself as “The Guardian”. The Guardian declares that he is the new ruler of Britannia and taunts The Avatar into returning. Just then, a portal to Britannia appears in its usual spot behind The Avatar’s house. Upon arriving in Britannia, The Avatar learns that nearly two hundred years (in Britannia time) have passed since his last visit. All is not well. Recently, there’s been a number of ghastly murders. Magic has become hard to control and a new shady organization known as The Brotherhood has been slowly gaining control of various parts of the kingdom’s political structure. The majority of the game itself revolves around The Avatar’s investigation into the mysterious murders and his plot to learn the secrets behind this new organization.

The Forge of Virtue: This add-on is really nothing more than one massive quest that integrates itself into the main game. Over the years it’s become inseparable from the main scenario.

Ultima VII: Part Two – Serpent Isle: Despite what the title suggests, this entry is not merely a second chapter to Ultima VII, but actually a completely separate game. The storyline for this title actually pulls from some pretty deep Ultima lore. In this game, The Avatar is tasked with chasing The Guardian’s second-in-command to an area known as Serpent Isle. (Fun Fact: For those that have played some of the earlier games in the series, you may actually recognize Serpent Isle as the part of “Sosaria” once known as “The Land of Danger and Despair”.) It is here that The Avatar must seek out his adversary.

The Silver Seed: Like the Forge of Virtue, this is an add-on that incorporates a new story-arc to the main game. Sadly, due to time constraints a number of plot points were left incomplete and this add-on ended up feeling a bit rushed. These days, it is included in nearly every distribution of Ultima VII: Serpent Isle. 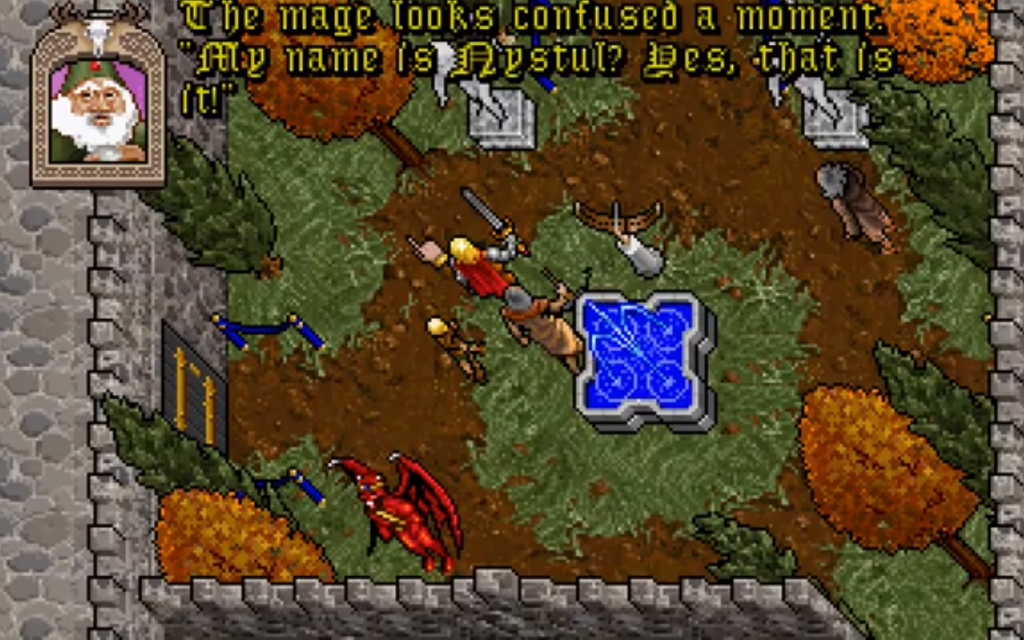 I want to start off this review by stating that I owned these games back in the 90’s as part of the Ultima Collection. However, unlike the earlier entries in the series, these games required a special DOS-based memory manager. Getting this configured under the old Windows 9X environment was quite a task. In fact, I never managed to get it to work without affecting my Windows installation. As a result, I never got see what these games were all about until now. Luckily, GOG has masterfully pre-configured DOSBox to handle the unusual requirements for Ultima VII. Thanks to them, I was actually able to play through these games for the very first time.

Let me start off by saying that quite a bit has changed since Ultima VI. As always, each new entry in the Ultima series serves as a showcase for the latest in technology at the time of its release. This game is no exception. The graphics are leaps and bounds above what was seen in Ultima VI. The same is true for the game’s soundtrack and user interface. While Ultima VI featured mouse support, Ultima VII was obviously designed with mouse users in mind. Every element of the game’s interface is designed for point-and-click. But the developers didn’t rest on their laurels once Ultima VII was completed. Ultima VII: Part Two boasts a few nice UI tweaks over what is seen in the original Ultima VII. It seems that Garriott and his crew never tire of improving their games – which is a very good thing. Of all the Ultima titles in the series so far, Ultima VII is the easiest and most intuitive to play.

Some of the biggest refinements in the game come from just how interactive the environment is. For example, players can grab and move blocks or interact with objects like switches and doors. Players are able to click on chests and drawers to open them. From there, a pop-up window will appear displaying the contents of the container. Players can click on items they want, then drag them to their inventory. Instead of text-based lists, players can now see their inventory visually and manage it accordingly. All of this was pretty impressive at the time. But where this game REALLY broke new ground has to do with the game-world itself. This time, Britannia is a living, breathing world. NPCs have a schedule. They get up at dawn, go to work, go out to eat, and then retire to bed at night. Sometimes, looking for a particular NPC involves knowing a bit about them and where they are likely to be at a certain time of day. Some elements of this were introduced in Ultima VI, but it really takes on a life of its own here.

As if that isn’t revolutionary enough, Ultima VII is also one of the very first sandbox style RPGs. Once you’ve worked your way through the opening scenes and taken a moment to get your feet wet, the whole game-world is wide open for you to explore and progress through at your leisure. Again, this open-world aspect was originally introduced in Ultima VI, but when combined with the new interactive environment – it introduced the world to a whole new level of immersion. Games like Skyrim simply would not exist if it wasn’t for Ultima VII. 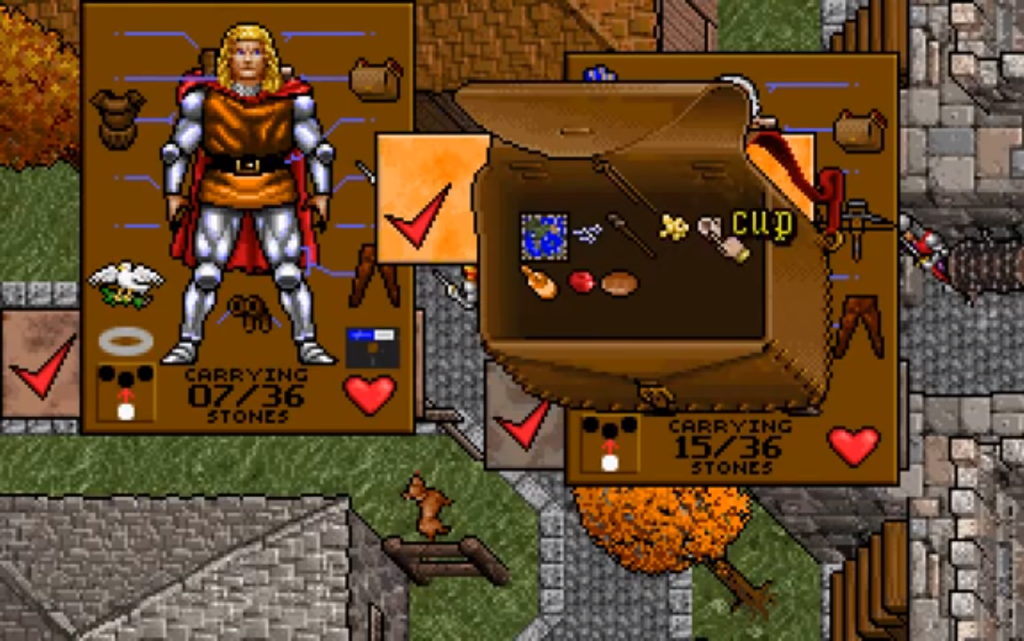 As far as these two games go, Ultima VII (and it’s expansion) is simply amazing. Everything about the game, from the gameplay itself to the storyline, is near perfection. Seriously, if you’re a fan of CRPGs, you owe it to yourself to play this classic.  Ultima VII: Part Two, on the other hand, is a pretty big mess. At first, Part Two starts off quite well. The storyline is unique and engaging (especially for fans of Ultima’s lore), but it all goes downhill from there. This is made even worse when you get into the content included in The Silver Seed expansion. In fact, I daresay it is the expansion itself that really makes a muddled up mess of the entire game.

I think what frustrated me the most with this title was the fact that there are so many loose ends left once the game is completed. It’s obvious that a ton of content was cut from this game in order to make its release date. Often times, in cases like these, the fan community will scrounge up enough resources to release an unofficial patch to restore much of the lost content. Sadly, so much was left incomplete that a fan-sourced patch is impossible in this situation. Regardless, Ultima VII: Part Two is still worth a look if you’re a serious fan of the series.

When viewed as a complete collection, Ultima VII gets way more right than it gets wrong. In fact, I think it’s actually one of my favorites in the series so far. I’m ashamed to admit it took me this long to finally sit down and give this game the attention it deserved. 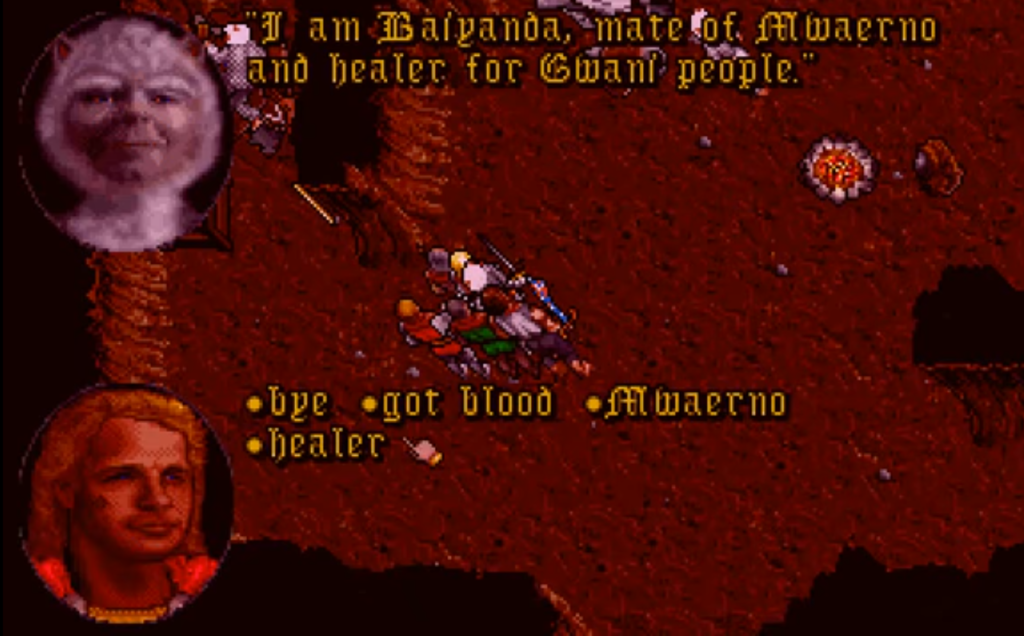 Difficulty: Medium –  For me, Ultima VII is a pretty balanced game in terms of difficulty. If you’re not adverse to being patient and taking notes, there’s really nothing in the game that is exceedingly difficult. For me, the biggest challenge came from aspects like inventory management and food supply. Some of the puzzles are tricky at times, but I never came across anything that just seemed completely unfair. Taking the time to dive into the expansions make completing the main scenarios that much easier.

Story: One of the strongest aspects of the game. The main storylines are masterfully done. If you’re a fan of Ultima lore, you’re likely to get a lot out of these scenarios. Ultima VII features one of the best CRPG storylines of all time. My only real complaint lies with Ultima VII: Part Two/The Silver Seed, many story elements are introduced and then completely abandoned. It’s very obvious that the certain parts of the game were never completed and these loose ends were left behind.

Originality: Ultima VII basically invented the sandbox RPG experience. It is impossible to understate the importance of this title to the genre. Even today, with games like Elder Scrolls, Ultima VII still manages to impress.

Soundtrack: This entry in the series features the biggest soundtrack so far. There’s a number of really good musical pieces in this game, but there’s also quite a few forgettable tracks. To me, it’s decent, but nothing really special.

Fun: Ultima VII is one of the all-time greatest CRPGs. If you enjoy open-world/sandbox RPGS, you’ll have a field day with this title. For me, this game ranks right up there with Ultima IV and V. Once I started playing, I was completely enthralled.

Graphics: Ultima VII featured cutting-edge graphics for its time. Of course, the game shows its age today. The only complaint I have lies with the on-screen text. All of the game’s text appears without any sort of bubble or shaded frame to separate it from whatever is behind it. Most of the time this isn’t really an issue. But occasionally, the dialogue can be hard to read – especially on today’s larger screens.

Playcontrol: This game is almost entirely point-and-click. The control scheme is a bit dated by today’s standards and does take a little while to get used to. But it is very intuitive and worlds well for the most part. On the downside, the default emulation of DOSBox does seem to introduce a little bit of lag to the mouse on modern systems. A little patience is required at first, but eventually it’s fairly easy to master.

Value:  Both of these games and their expansions are available on GOG as Ultima VII – The Complete Collection. The entire bundle is available for the low price of $5.99. This is a ridiculously low price for all of the content included in these games.

Overall score (1-100): 90 – When looked at as a whole, Ultima VII is nothing short of a masterpiece. The second game in the collection does suffer considerably in certain areas, but everything else more than makes up for it. This game is representative of the classic CRPG experience. I recommend it to any serious RPG fan who isn’t afraid to display a little patience.