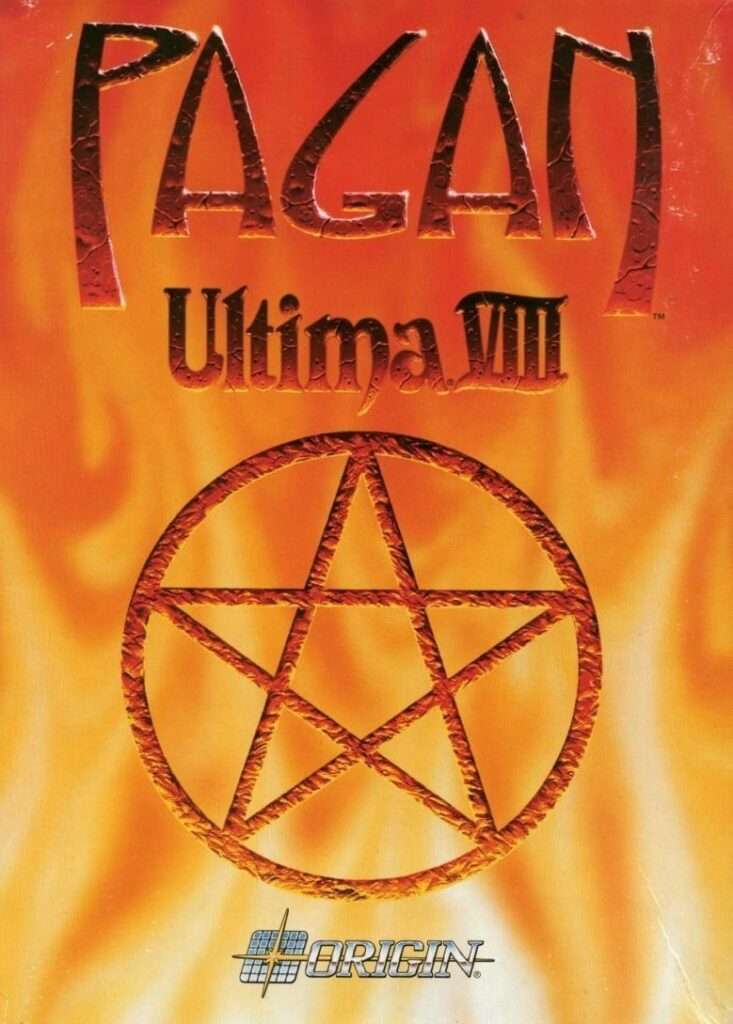 My Ultima series playthrough is nearing its end! This time, I’m going to review what is probably the strangest entry in the franchise, Ultima VIII – Pagan. What makes this game so different than all of the other entries in the series so far? Well, for the first time we have an Ultima title that doesn’t really feel like a traditional RPG. Instead, Ultima VIII ends up being more of an overhead action game with some light RPG-esque elements. This makes for a vastly different game than what fans were used to.

So far, each Ultima game has consistently built off of its predecessor. That is not the case at all with Ultima VIII. When trying to understand why this game is radically different, it is often accepted that Lord British had very little input into the construction of this particular game. His lack of supervision certainly shows in the final product.

For some odd reason that I don’t remember, I actually possessed a copy of this game back in the nineties, before the release of the Ultima Collection. (I think it came bundled with a CD-ROM drive that I purchased.) I remember spending quite a bit of time tinkering with my system so that I could get this game to work correctly. In the end, I did manage to get it up and running. But I never got more than an hour or two into the game before I got distracted by something else. When the Ultima Collection hit the shelves, I had moved from DOS to Windows and I never could get the game to a functional state again. So, this review marks my first time really playing through this title from start to finish. 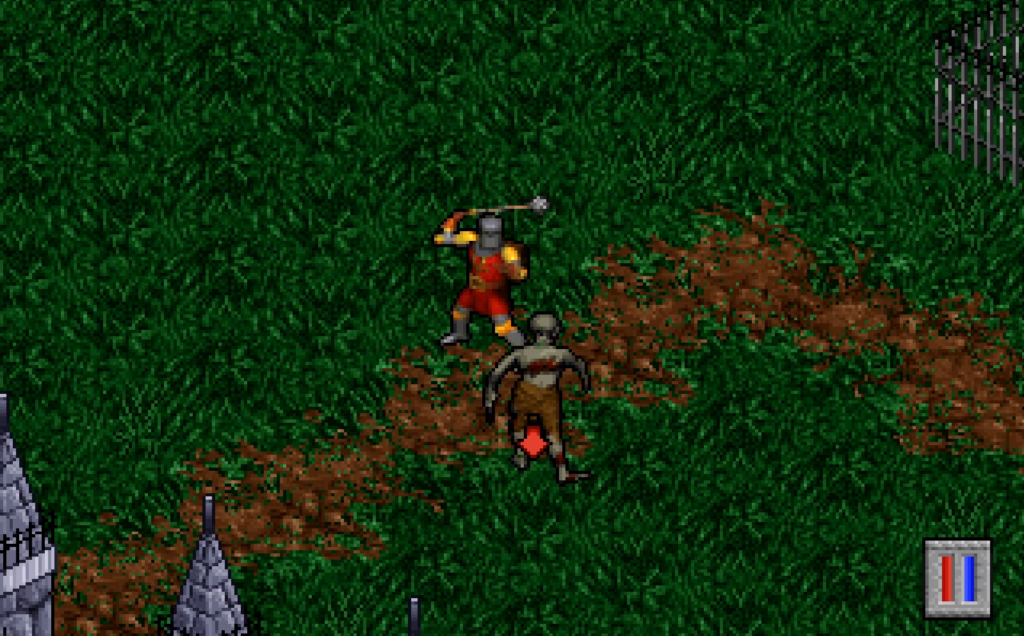 In this game, the story picks up right where we left off in Ultima VII – Part Two. The Avatar has been snatched up by The Guardian and banished to the mysterious world of Pagan, The Guardian’s home world. It is up to The Avatar to figure out how to escape this world and return to Britannia so that he can confront The Guardian once and for all.

On a technological level, this game was nothing short of cutting edge when it was released. The world of Pagan is beautifully presented. Like every entry in the Ultima series, this chapter features a massive graphical upgrade. In fact, it is probably one of the best looking PC games pre-1995. Ultima VIII included a full MIDI soundtrack for PCs equipped with sound cards and there was even an optional speech-pack was sold alongside the game that enabled spoken dialogue for several of the game’s key scenes and characters – something that was unheard of at the time.

Despite being a very advanced game in terms of technology. Ultima VIII suffers from some pretty awful design decisions. First of all, in a radical departure from the series’ roots, combat in the game is action-based. The Avatar does battle by striking, blocking or kicking. To make matters worse, the whole affair is extremely clunky.  To add insult to injury, a large portion of the gameplay relies on platforming. Many of the game’s dungeons and the overworld environment require The Avatar to leap over running water or hop from stone to stone. The terrible thing about this is that the playcontrol in this game is horrendous. Jumping is sluggish and often unresponsive. This, combined with a UI that is completely mouse-driven, makes for quite a terrible experience. 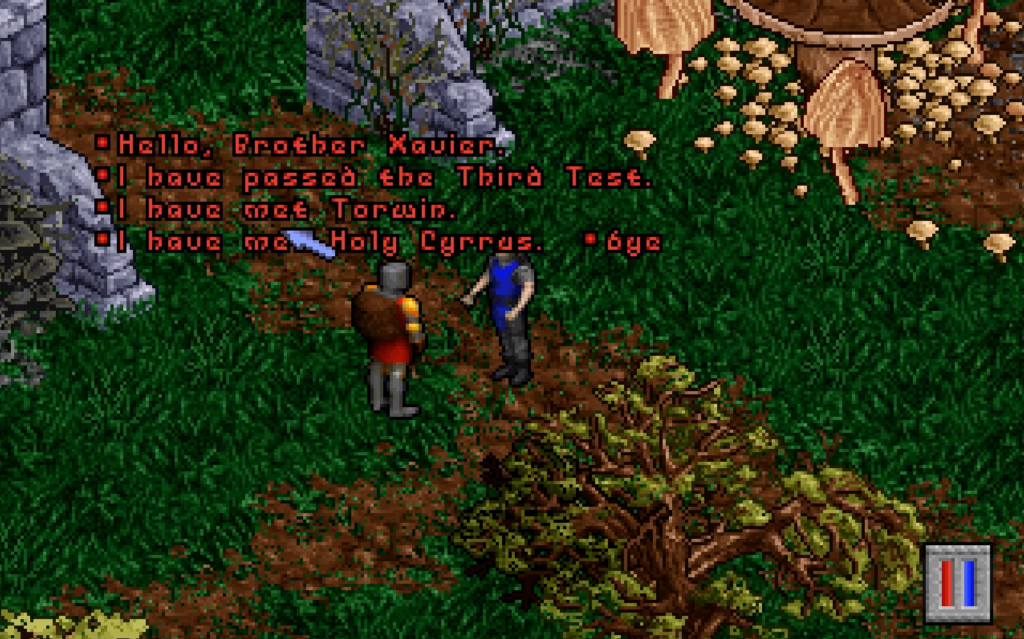 Needless to say, the playcontrol for this game is pretty bad. But if that were my only complaint, I think I could overlook it. Sadly, it is not. Like Ultima VII – Part Two, this game also suffers from being largely unfinished. The storyline is disjointed and contains gaping plot holes. Several parts of the game elude to certain events and locations that simply do not exist. The game even includes a special doorway meant to lead into an whole new area that was to be included in later expansion. But, despite being fully completed, the expansion (The Lost Vale) never saw the light of day. What a poor experience.

So, yes. I have some pretty serious problems with this game as a whole. But on the other side of the coin, Ultima VIII also has some good points. First, the game is very atmospheric. The world of Pagan is extremely well presented and proved to be awe-inspiring enough to keep me playing. Also, playing a weakened version of The Avatar brings back a real sense of danger to a series where the main hero was beginning to feel slightly overpowered. In this game, a majority of the enemies are much stronger than the player so choosing to either do combat with them or run away is very important part of the gameplay.

The nitty gritty ends up being a very mixed bag. Yes, Ultima VIII feels broken and unfinished. But, at the time of its release, it was also groundbreaking enough that it could easily captivate its audience. Even today, I found myself drawn into it despite its flaws. Regardless, this game is likely to be a tough sell to anyone but the most devoted fans of the series. 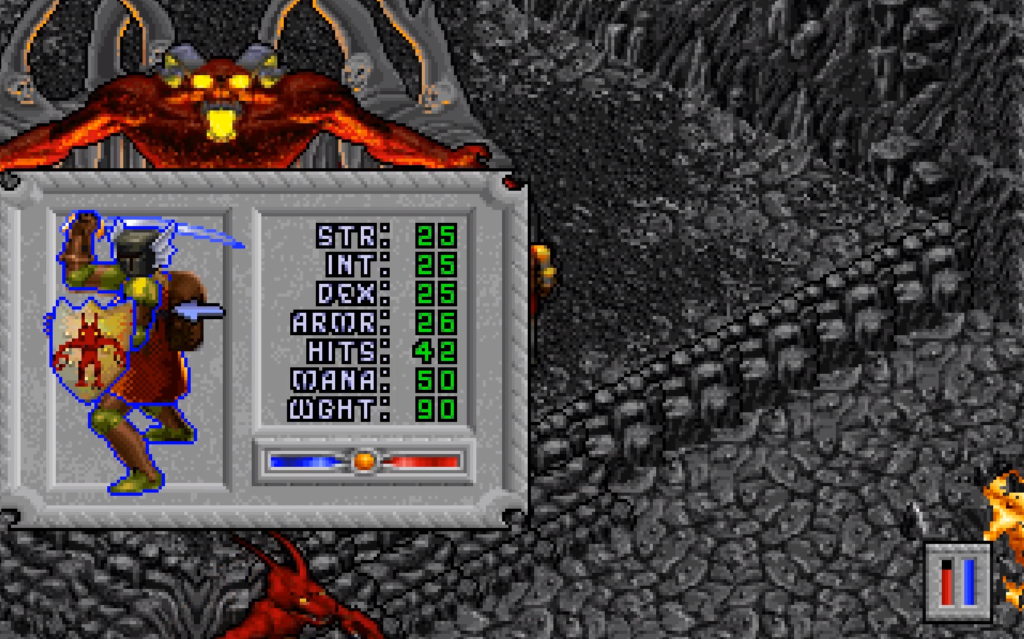 Difficulty: Hard –  Ultima VIII is one of the harder entries in the series. Many enemies are very challenging. This is especially true in earlier parts of the game. But combat aside, the game’s jumping puzzles are likely to provide plenty of frustration and headaches – not so much due to the challenge they were intended to provide, but more so because of the game’s horrid playcontrol.

Story: Despite suffering from some pretty big loose ends, the overall storyline for this game is very well done. Taking The Avatar out of Britannia and thrusting him into a new and unfamiliar world (where he is forced to break his own rules to survive), really brings some excitement to the series.

Originality: If anyone was worried that the Ultima series was starting to get a bit repetitive, this game will almost certainly change their minds. Ultima VIII looks and works NOTHING like any other game in the franchise. Whether you consider that to be good or bad, you can’t argue that Ultima VIII isn’t a fresh offering in the series.

Soundtrack: This game features a full MIDI score as well as an optional voice patch. Both of these are very well done. The music isn’t particularly memorable per se, but it does a great job at setting up the game’s atmosphere.

Fun: This is a game that can be pretty tough to get into. It has received more than its share of harsh criticism over the years – much it warranted. But I also got quite a bit of enjoyment out of it. Without a doubt, it is certainly an acquired taste.

Graphics: There was nothing quite like Ultima VIII at the time it was released. The graphics were the cream of the crop. Even today, in a world where 3D acceleration rules, Ultima VIII still manages to look pretty darn good.

Playcontrol: This is the game’s biggest weak point. Everything from the UI to the game’s actual control scheme is nothing short of a hot mess. The entire game is controlled via point-and-click, something that is traditionally hard to mess up. But somehow Origin managed to really botch this one. Combat is sluggish and cumbersome – and don’t get me started on the jumping. To make matters worse, the game also suffers from a slight input lag as a result of the DOS Box emulation on modern systems.

Value:  Ultima VIII is currently available in its “Gold” package (the base game bundled with the speech pack) on GOG for a mere $5.99. Even with a number of glaring flaws, I feel the game is well worth a price this low.

Overall score (1-100): 65 – Ultima VIII certainly suffers from its share of issues. But, it’s by no means one of the worst games I’ve played. In fact, there’s really quite a bit to like about it if you’re willing to set aside any expectations and just enjoy it for what it is. But fair warning; If you are looking for another Ultima VII, you will be let down.