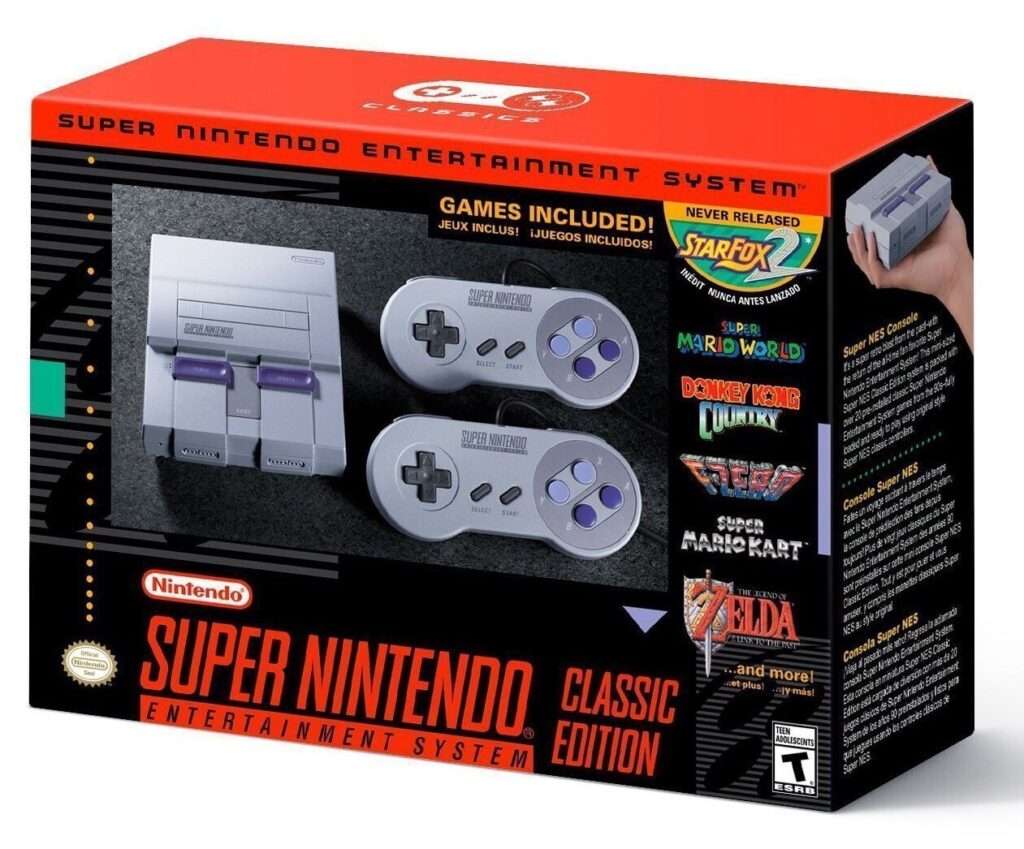 Back in the fall, I made a post where I discussed the best way to experience classic NES games. My suggestion, of course, was the NES Classic console. In case you’re not familiar, the NES Classic is a modern plug-and-play style system, designed by Nintendo themselves. The system comes pre-loaded with a number of classic titles, all ready to play – right out of the box. The console was a smashing success. Well, Nintendo took the hint and continued the trend with the Super NES Classic Edition.

That’s right, no more messing around with Virtual Console titles that will be abandoned in just a few years time. You can snag yourself one of these mini SNES replicas and jump right in to some truly classic games. What’s included with the SNES Classic? Let’s take a look at the US console…

Not a bad line-up. Of course, the big news here is the inclusion of Star Fox 2. This is a game, that until the release of the SNES Classic, never saw the light of day. So having it included in this collection is a major selling point for Nintendo fans. Of course, there’s a ton of classic SNES games missing from this list. Where’s Super Mario All-Stars? What about Final Fantasy IV? Yes, I know that All-Stars is really nothing more than a collection of remastered Mario games, and of course Final Fantasy IV is readily available on just about every platform in the world. But that’s beside the point. There’s MORE than enough room on this console for some additional games. Which leads me to my next point…

Just like with the NES Classic, it’s insanely easy to put additional games on the SNES Classic. Again, it’s almost as if Nintendo purposely built the unit with this in mind. The system has enough free space to hold a hundred, if not more, additional games. Installing other titles is as simple as plugging the SNES Classic to your PC via USB and moving files over. Of course, actually getting game ROMS is the sketchy part of the whole equation. It’s not illegal to possess, or even use ROM flashes of SNES games. But it is illegal to download them without possessing a copy of the same game. Of course, Super Nintendo ROMS are readily available all over the internet if you know where to look. So, do with this information what you will…

So, if you ever wanted to experience rare Japanese-exclusive games without having to resort to setting up emulator software, this is your best solution. No more tinkering with controller settings or setting up the emulator to work with your device. Just drop the ROMs in the directory and go. For this reason, the SNES Classic is what I recommend for everyday 16-bit SNES gaming. This is the method I’ll be using it to fill in some of the gaps in my backlog for future posts.

Both this system and the NES Classic and now out of production and are getting more and more difficult to obtain. So, if you see one in your local store, DON’T DELAY. Grab it. There’s no telling if Nintendo is going to sell them in the future and they are truly amazing. Don’t let either of these pass you by.

If you want to catch up with some of my previous SNES reviews, I’ve included a list below of games that have already been reviewed on this site:

Legend of Zelda: A Link to the Past